Systems of Equations and Inequalities

In this section, you will:

Understanding the correct approach to setting up problems such as this one makes finding a solution a matter of following a pattern. We will solve this and similar problems involving three equations and three variables in this section. Doing so uses similar techniques as those used to solve systems of two equations in two variables. However, finding solutions to systems of three equations requires a bit more organization and a touch of visual gymnastics.

In order to solve systems of equations in three variables, known as three-by-three systems, the primary tool we will be using is called Gaussian elimination, named after the prolific German mathematician Karl Friedrich Gauss. While there is no definitive order in which operations are to be performed, there are specific guidelines as to what type of moves can be made. We may number the equations to keep track of the steps we apply. The goal is to eliminate one variable at a time to achieve upper triangular form, the ideal form for a three-by-three system because it allows for straightforward back-substitution to find a solution

which we call an ordered triple. A system in upper triangular form looks like the following:

The third equation can be solved for

and then we back-substitute to find

To write the system in upper triangular form, we can perform the following operations:

Determining Whether an Ordered Triple Is a Solution to a System

Determine whether the ordered triple

is a solution to the system.

is indeed a solution to the system.

Given a linear system of three equations, solve for three unknowns.

Solving a System of Three Equations in Three Variables by Elimination

Find a solution to the following system:

There will always be several choices as to where to begin, but the most obvious first step here is to eliminate

The second step is multiplying equation (1) by

and adding the result to equation (3). These two steps will eliminate the variable

by adding the two equations.

Choosing one equation from each new system, we obtain the upper triangular form:

into equation (4) and solve for

into equation (1). This will yield the solution for

The solution is the ordered triple

In the problem posed at the beginning of the section, John invested his inheritance of $12,000 in three different funds: part in a money-market fund paying 3% interest annually; part in municipal bonds paying 4% annually; and the rest in mutual funds paying 7% annually. John invested $4,000 more in mutual funds than he invested in municipal bonds. The total interest earned in one year was $670. How much did he invest in each type of fund?

To solve this problem, we use all of the information given and set up three equations. First, we assign a variable to each of the three investment amounts:

The first equation indicates that the sum of the three principal amounts is $12,000.

We form the second equation according to the information that John invested $4,000 more in mutual funds than he invested in municipal bonds.

The third equation shows that the total amount of interest earned from each fund equals $670.

Then, we write the three equations as a system.

To make the calculations simpler, we can multiply the third equation by 100. Thus,

Step 1. Interchange equation (2) and equation (3) so that the two equations with three variables will line up.

Then, back-substitute the values for

into equation (1) and solve for 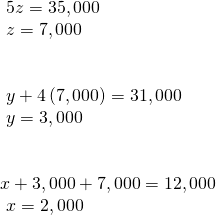 Solve the system of equations in three variables.

Just as with systems of equations in two variables, we may come across an inconsistent system of equations in three variables, which means that it does not have a solution that satisfies all three equations. The equations could represent three parallel planes, two parallel planes and one intersecting plane, or three planes that intersect the other two but not at the same location. The process of elimination will result in a false statement, such as

or some other contradiction.

Solving an Inconsistent System of Three Equations in Three Variables

Looking at the coefficients of

we can see that we can eliminate

Next, we multiply equation (1) by

is a contradiction, so we conclude that the system of equations in inconsistent and, therefore, has no solution.

In this system, each plane intersects the other two, but not at the same location. Therefore, the system is inconsistent.

Solve the system of three equations in three variables.

Finding the Solution to a Dependent System of Equations

Find the solution to the given system of three equations in three variables.

First, we can multiply equation (1) by

We do not need to proceed any further. The result we get is an identity,

which tells us that this system has an infinite number of solutions. There are other ways to begin to solve this system, such as multiplying equation (3) by

and adding it to equation (1). We then perform the same steps as above and find the same result,

When a system is dependent, we can find general expressions for the solutions. Adding equations (1) and (3), we have

We then solve the resulting equation for

We back-substitute the expression for

into one of the equations and solve for

So the general solution is

can be any real number. The values of

are dependent on the value selected for

As shown in (Figure), two of the planes are the same and they intersect the third plane on a line. The solution set is infinite, as all points along the intersection line will satisfy all three equations.

No, you can write the generic solution in terms of any of the variables, but it is common to write it in terms of x and if needed

Infinite number of solutions of the form

Access these online resources for additional instruction and practice with systems of equations in three variables.

Can a linear system of three equations have exactly two solutions? Explain why or why not

No, there can be only one, zero, or infinitely many solutions.

If a given ordered triple solves the system of equations, is that solution unique? If so, explain why. If not, give an example where it is not unique.

If a given ordered triple does not solve the system of equations, is there no solution? If so, explain why. If not, give an example.

Not necessarily. There could be zero, one, or infinitely many solutions. For example,

is not a solution to the system below, but that does not mean that it has no solution.

Using the method of addition, is there only one way to solve the system?

Every system of equations can be solved graphically, by substitution, and by addition. However, systems of three equations become very complex to solve graphically so other methods are usually preferable.

For the following exercises, determine whether the ordered triple given is the solution to the system of equations.

For the following exercises, solve each system by substitution.

For the following exercises, solve each system by Gaussian elimination.

For the following exercises, solve the system for

Three even numbers sum up to 108. The smaller is half the larger and the middle number is

the larger. What are the three numbers?

An animal shelter has a total of 350 animals comprised of cats, dogs, and rabbits. If the number of rabbits is 5 less than one-half the number of cats, and there are 20 more cats than dogs, how many of each animal are at the shelter?

Your roommate, John, offered to buy household supplies for you and your other roommate. You live near the border of three states, each of which has a different sales tax. The total amount of money spent was $100.75. Your supplies were bought with 5% tax, John’s with 8% tax, and your third roommate’s with 9% sales tax. The total amount of money spent without taxes is $93.50. If your supplies before tax were $1 more than half of what your third roommate’s supplies were before tax, how much did each of you spend? Give your answer both with and without taxes.

There are infinitely many solutions; we need more information

A local band sells out for their concert. They sell all 1,175 tickets for a total purse of $28,112.50. The tickets were priced at $20 for student tickets, $22.50 for children, and $29 for adult tickets. If the band sold twice as many adult as children tickets, how many of each type was sold?

In a bag, a child has 325 coins worth $19.50. There were three types of coins: pennies, nickels, and dimes. If the bag contained the same number of nickels as dimes, how many of each type of coin was in the bag?

A recent college graduate took advantage of his business education and invested in three investments immediately after graduating. He invested $80,500 into three accounts, one that paid 4% simple interest, one that paid

simple interest, and one that paid

Systems of Linear Equations: Three Variables by OpenStax is licensed under a Creative Commons Attribution 4.0 International License, except where otherwise noted.