The chemical reactions of life take place in aqueous solutions. The dissolved substances in a solution are called solutes. In the human body, solutes vary in different parts of the body, but may include proteins—including those that transport lipids, carbohydrates, and, very importantly, electrolytes. Often in medicine, a mineral dissociated from a salt that carries an electrical charge (an ion) is called and electrolyte. For instance, sodium ions (Na+) and chloride ions (Cl–) are often referred to as electrolytes.

In the body, water moves through semi-permeable membranes of cells and from one compartment of the body to another by a process called osmosis. Osmosis is basically the diffusion of water from regions of higher concentration to regions of lower concentration, along an osmotic gradient across a semi-permeable membrane. As a result, water will move into and out of cells and tissues, depending on the relative concentrations of the water and solutes found there. An appropriate balance of solutes inside and outside of cells must be maintained to ensure normal function.

Human beings are mostly water, ranging from about 75 percent of body mass in infants to about 50–60 percent in adult men and women, to as low as 45 percent in old age. The percent of body water changes with development, because the proportions of the body given over to each organ and to muscles, fat, bone, and other tissues change from infancy to adulthood ((Figure)). Your brain and kidneys have the highest proportions of water, which composes 80–85 percent of their masses. In contrast, teeth have the lowest proportion of water, at 8–10 percent.

Water Content of the Body’s Organs and Tissues
Water content varies in different body organs and tissues, from as little as 8 percent in the teeth to as much as 85 percent in the brain. 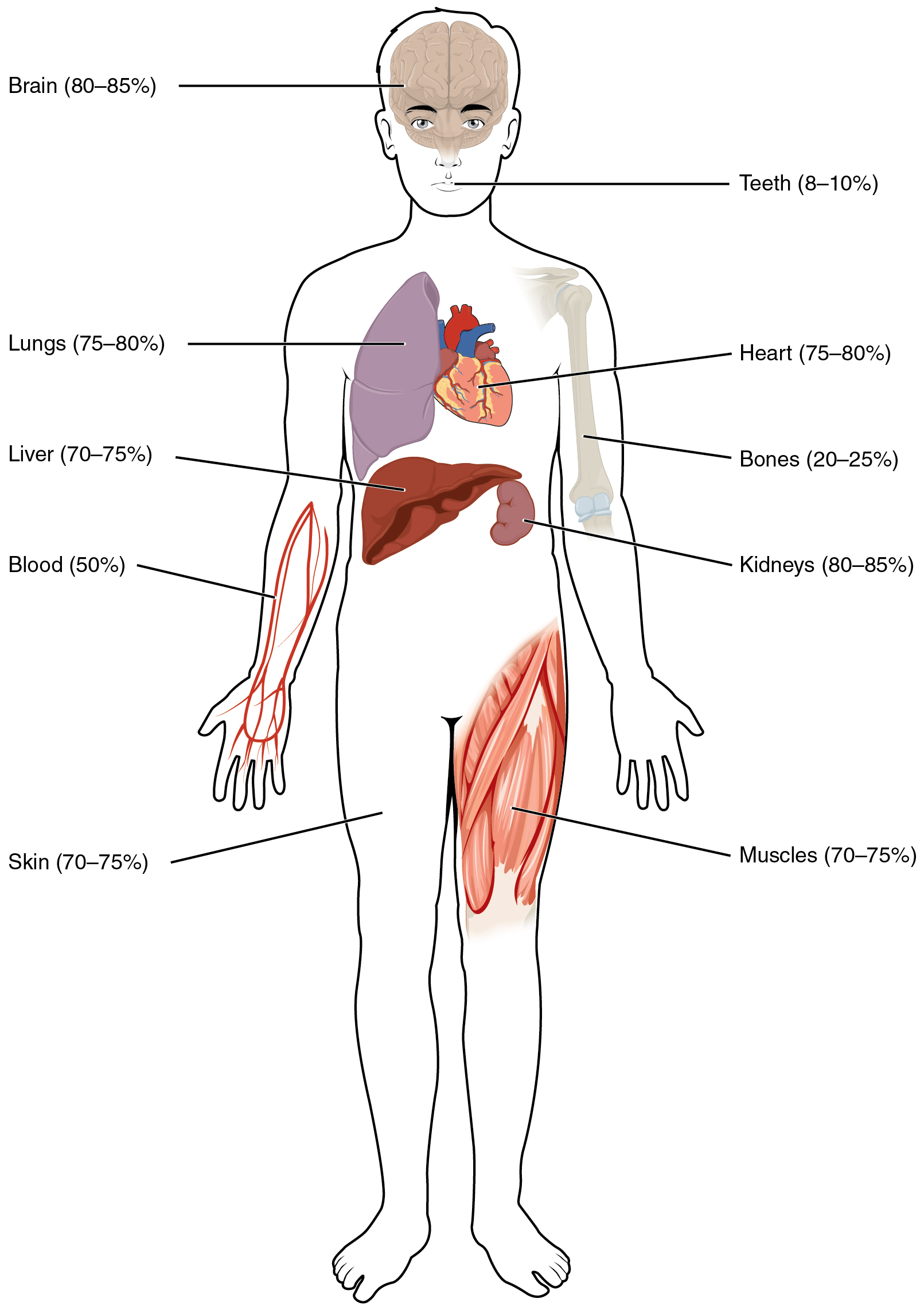 Fluid Compartments in the Human Body
The intracellular fluid (ICF) is the fluid within cells. The interstitial fluid (IF) is part of the extracellular fluid (ECF) between the cells. Blood plasma is the second part of the ECF. Materials travel between cells and the plasma in capillaries through the IF. 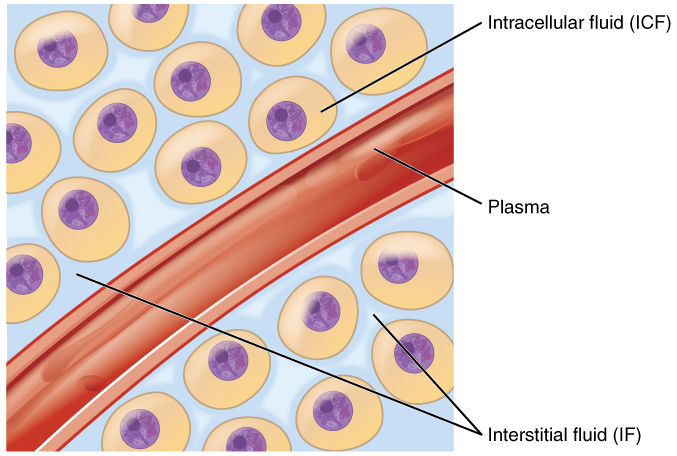 The ICF lies within cells and is the principal component of the cytosol/cytoplasm. The ICF makes up about 60 percent of the total water in the human body, and in an average-size adult male, the ICF accounts for about 25 liters (seven gallons) of fluid ((Figure)). This fluid volume tends to be very stable, because the amount of water in living cells is closely regulated. If the amount of water inside a cell falls to a value that is too low, the cytosol becomes too concentrated with solutes to carry on normal cellular activities; if too much water enters a cell, the cell may burst and be destroyed.

A Pie Graph Showing the Proportion of Total Body Fluid in Each of the Body’s Fluid Compartments
Most of the water in the body is intracellular fluid. The second largest volume is the interstitial fluid, which surrounds cells that are not blood cells. 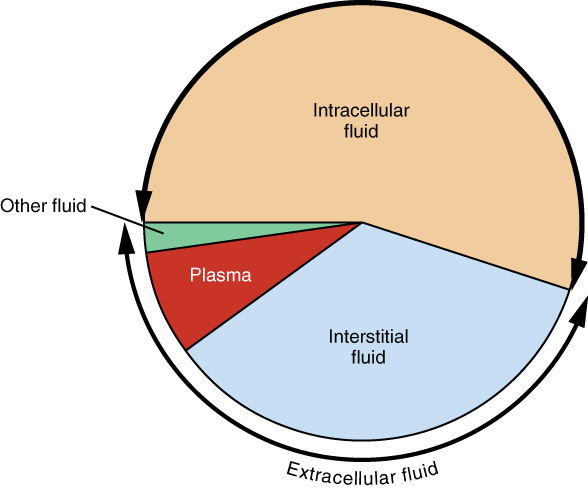 The ECF accounts for the other one-third of the body’s water content. Approximately 20 percent of the ECF is found in plasma. Plasma travels through the body in blood vessels and transports a range of materials, including blood cells, proteins (including clotting factors and antibodies), electrolytes, nutrients, gases, and wastes. Gases, nutrients, and waste materials travel between capillaries and cells through the IF. Cells are separated from the IF by a selectively permeable cell membrane that helps regulate the passage of materials between the IF and the interior of the cell. 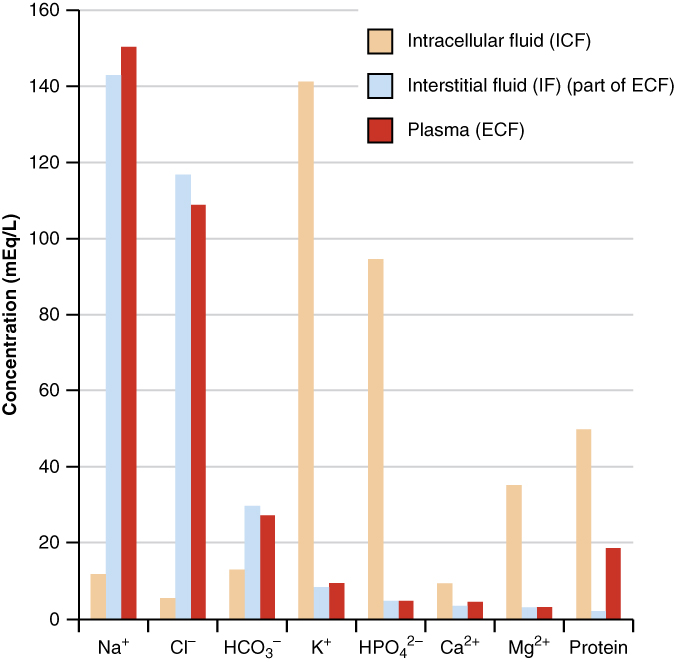 Watch this video to learn more about body fluids, fluid compartments, and electrolytes. When blood volume decreases due to sweating, from what source is water taken in by the blood?

Most body fluids are neutral in charge. Thus, cations, or positively charged ions, and anions, or negatively charged ions, are balanced in fluids. As seen in the previous graph, sodium (Na+) ions and chloride (Cl–) ions are concentrated in the ECF of the body, whereas potassium (K+) ions are concentrated inside cells. Although sodium and potassium can “leak” through “pores” into and out of cells, respectively, the high levels of potassium and low levels of sodium in the ICF are maintained by sodium-potassium pumps in the cell membranes. These pumps use the energy supplied by ATP to pump sodium out of the cell and potassium into the cell ((Figure)).

Watch this video to see an explanation of the dynamics of fluid in the body’s compartments. What happens in the tissue when capillary blood pressure is less than osmotic pressure?

For example, if you are sweating, you will lose water through your skin. Sweating depletes your tissues of water and increases the solute concentration in those tissues. As this happens, water diffuses from your blood into sweat glands and surrounding skin tissues that have become dehydrated because of the osmotic gradient. Additionally, as water leaves the blood, it is replaced by the water in other tissues throughout your body that are not dehydrated. If this continues, dehydration spreads throughout the body. When a dehydrated person drinks water and rehydrates, the water is redistributed by the same gradient, but in the opposite direction, replenishing water in all of the tissues.

The movement of some solutes between compartments is active, which consumes energy and is an active transport process, whereas the movement of other solutes is passive, which does not require energy. Active transport allows cells to move a specific substance against its concentration gradient through a membrane protein, requiring energy in the form of ATP. For example, the sodium-potassium pump employs active transport to pump sodium out of cells and potassium into cells, with both substances moving against their concentration gradients.

Passive transport of a molecule or ion depends on its ability to pass through the membrane, as well as the existence of a concentration gradient that allows the molecules to diffuse from an area of higher concentration to an area of lower concentration. Some molecules, like gases, lipids, and water itself (which also utilizes water channels in the membrane called aquaporins), slip fairly easily through the cell membrane; others, including polar molecules like glucose, amino acids, and ions do not. Some of these molecules enter and leave cells using facilitated transport, whereby the molecules move down a concentration gradient through specific protein channels in the membrane. This process does not require energy. For example, glucose is transferred into cells by glucose transporters that use facilitated transport ((Figure)).

Facilitated Diffusion
Glucose molecules use facilitated diffusion to move down a concentration gradient through the carrier protein channels in the membrane. (credit: modification of work by Mariana Ruiz Villarreal)

Fluid Balance: Edema Edema is the accumulation of excess water in the tissues. It is most common in the soft tissues of the extremities. The physiological causes of edema include water leakage from blood capillaries. Edema is almost always caused by an underlying medical condition, by the use of certain therapeutic drugs, by pregnancy, by localized injury, or by an allergic reaction. In the limbs, the symptoms of edema include swelling of the subcutaneous tissues, an increase in the normal size of the limb, and stretched, tight skin. One quick way to check for subcutaneous edema localized in a limb is to press a finger into the suspected area. Edema is likely if the depression persists for several seconds after the finger is removed (which is called “pitting”).

Pulmonary edema is excess fluid in the air sacs of the lungs, a common symptom of heart and/or kidney failure. People with pulmonary edema likely will experience difficulty breathing, and they may experience chest pain. Pulmonary edema can be life threatening, because it compromises gas exchange in the lungs, and anyone having symptoms should immediately seek medical care.

Other causes of edema include damage to blood vessels and/or lymphatic vessels, or a decrease in osmotic pressure in chronic and severe liver disease, where the liver is unable to manufacture plasma proteins ((Figure)). A decrease in the normal levels of plasma proteins results in a decrease of colloid osmotic pressure (which counterbalances the hydrostatic pressure) in the capillaries. This process causes loss of water from the blood to the surrounding tissues, resulting in edema.

Edema
An allergic reaction can cause capillaries in the hand to leak excess fluid that accumulates in the tissues. (credit: Jane Whitney) 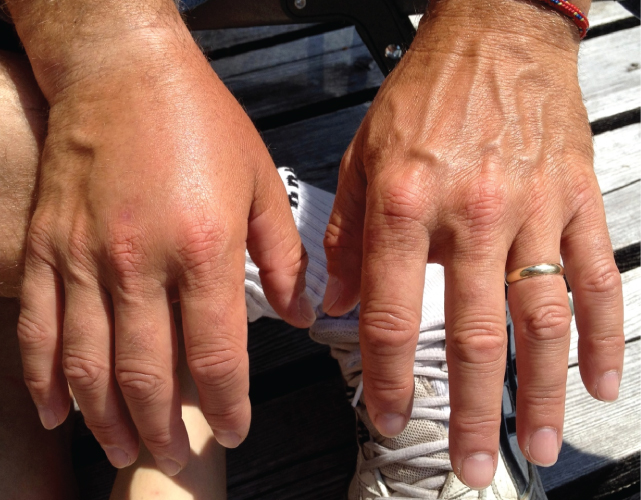 Mild, transient edema of the feet and legs may be caused by sitting or standing in the same position for long periods of time, as in the work of a toll collector or a supermarket cashier. This is because deep veins in the lower limbs rely on skeletal muscle contractions to push on the veins and thus “pump” blood back to the heart. Otherwise, the venous blood pools in the lower limbs and can leak into surrounding tissues.

Medications that can result in edema include vasodilators, calcium channel blockers used to treat hypertension, non-steroidal anti-inflammatory drugs, estrogen therapies, and some diabetes medications. Underlying medical conditions that can contribute to edema include congestive heart failure, kidney damage and kidney disease, disorders that affect the veins of the legs, and cirrhosis and other liver disorders.

Therapy for edema usually focuses on elimination of the cause. Activities that can reduce the effects of the condition include appropriate exercises to keep the blood and lymph flowing through the affected areas. Other therapies include elevation of the affected part to assist drainage, massage and compression of the areas to move the fluid out of the tissues, and decreased salt intake to decrease sodium and water retention.

Your body is mostly water. Body fluids are aqueous solutions with differing concentrations of materials, called solutes. An appropriate balance of water and solute concentrations must be maintained to ensure cellular functions. If the cytosol becomes too concentrated due to water loss, cell functions deteriorate. If the cytosol becomes too dilute due to water intake by cells, cell membranes can be damaged, and the cell can burst. Hydrostatic pressure is the force exerted by a fluid against a wall and causes movement of fluid between compartments. Fluid can also move between compartments along an osmotic gradient. Active transport processes require ATP to move some solutes against their concentration gradients between compartments. Passive transport of a molecule or ion depends on its ability to pass easily through the membrane, as well as the existence of a high to low concentration gradient.

Watch this video to learn more about body fluids, fluid compartments, and electrolytes. When blood volume decreases due to sweating, from what source is water taken in by the blood?

The interstitial fluid (IF).

Watch this video to see an explanation of the dynamics of fluid in the body’s compartments. What happens in tissues when capillary blood pressure is less than osmotic pressure?

Solute contributes to the movement of water between cells and the surrounding medium by ________.

Plasma contains more sodium than chloride. How can this be if individual ions of sodium and chloride exactly balance each other out, and plasma is electrically neutral?

There are additional negatively charged molecules in plasma besides chloride. The additional sodium balances the total negative charges.

extracellular fluid (ECF)
fluid exterior to cells; includes the interstitial fluid, blood plasma, and fluids found in other reservoirs in the body

hydrostatic pressure
pressure exerted by a fluid against a wall, caused by its own weight or pumping force

intracellular fluid (ICF)
fluid in the cytosol of cells