The Cardiovascular System: The Heart

The period of time that begins with contraction of the atria and ends with ventricular relaxation is known as the cardiac cycle ((Figure)). The period of contraction that the heart undergoes while it pumps blood into circulation is called systole. The period of relaxation that occurs as the chambers fill with blood is called diastole. Both the atria and ventricles undergo systole and diastole, and it is essential that these components be carefully regulated and coordinated to ensure blood is pumped efficiently to the body. 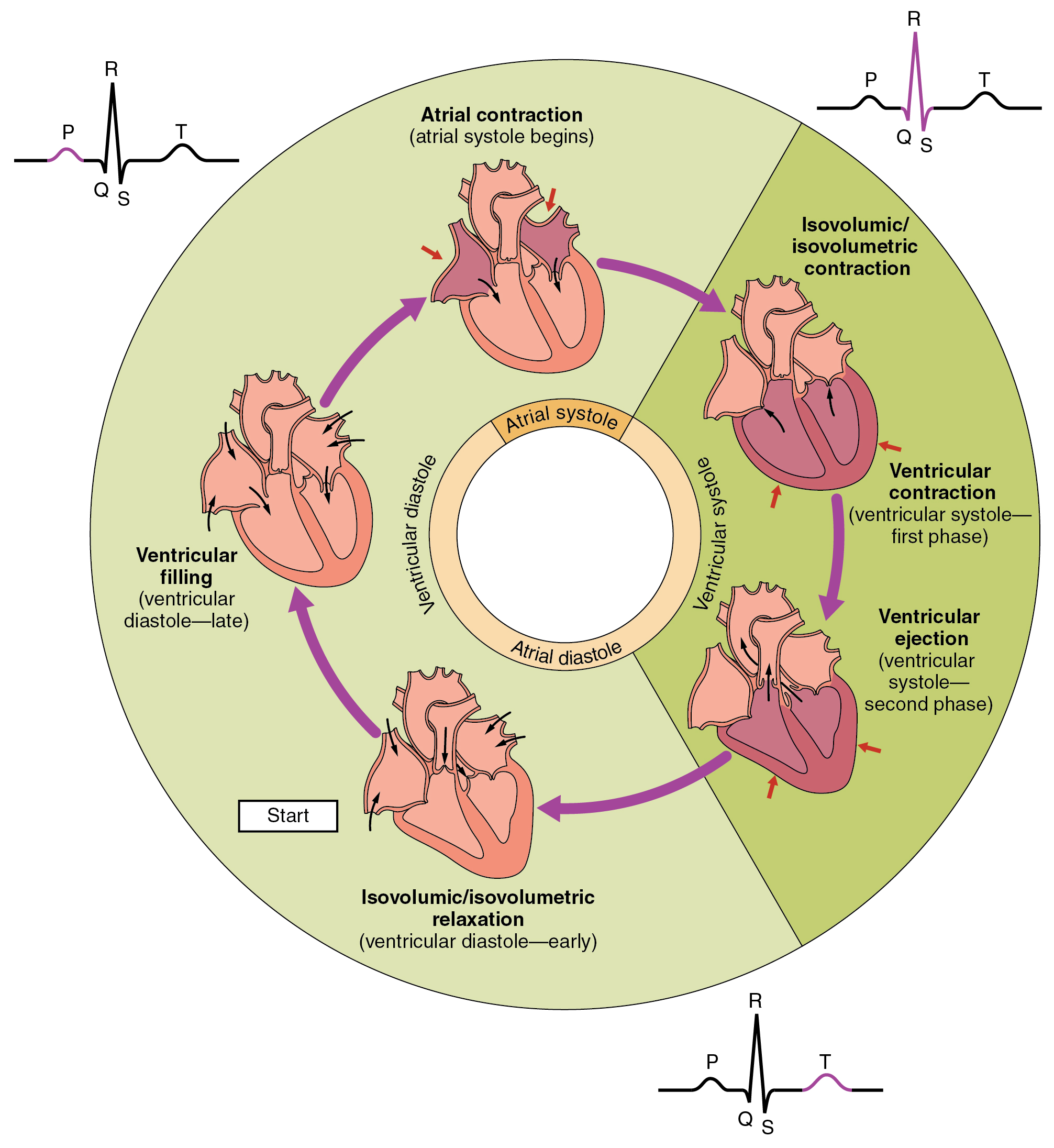 Fluids, whether gases or liquids, are materials that flow according to pressure gradients—that is, they move from regions that are higher in pressure to regions that are lower in pressure. Accordingly, when the heart chambers are relaxed (diastole), blood will flow into the atria from the veins, which are higher in pressure. As blood flows into the atria, the pressure will rise, so the blood will initially move passively from the atria into the ventricles. When the action potential triggers the muscles in the atria to contract (atrial systole), the pressure within the atria rises further, pumping blood into the ventricles. During ventricular systole, pressure rises in the ventricles, pumping blood into the pulmonary trunk from the right ventricle and into the aorta from the left ventricle. Again, as you consider this flow and relate it to the conduction pathway, the elegance of the system should become apparent.

Phases of the Cardiac Cycle

At the beginning of the cardiac cycle, both the atria and ventricles are relaxed (diastole). Blood is flowing into the right atrium from the superior and inferior venae cavae and the coronary sinus. Blood flows into the left atrium from the four pulmonary veins. The two atrioventricular valves, the tricuspid and mitral valves, are both open, so blood flows unimpeded from the atria and into the ventricles. Approximately 70–80 percent of ventricular filling occurs by this method. The two semilunar valves, the pulmonary and aortic valves, are closed, preventing backflow of blood into the right and left ventricles from the pulmonary trunk on the right and the aorta on the left.

Contraction of the atria follows depolarization, represented by the P wave of the ECG. As the atrial muscles contract from the superior portion of the atria toward the atrioventricular septum, pressure rises within the atria and blood is pumped into the ventricles through the open atrioventricular (tricuspid, and mitral or bicuspid) valves. At the start of atrial systole, the ventricles are normally filled with approximately 70–80 percent of their capacity due to inflow during diastole. Atrial contraction, also referred to as the “atrial kick,” contributes the remaining 20–30 percent of filling (see (Figure)). Atrial systole lasts approximately 100 ms and ends prior to ventricular systole, as the atrial muscle returns to diastole.

Ventricular systole (see (Figure)) follows the depolarization of the ventricles and is represented by the QRS complex in the ECG. It may be conveniently divided into two phases, lasting a total of 270 ms. At the end of atrial systole and just prior to atrial contraction, the ventricles contain approximately 130 mL blood in a resting adult in a standing position. This volume is known as the end diastolic volume (EDV) or preload.

Initially, as the muscles in the ventricle contract, the pressure of the blood within the chamber rises, but it is not yet high enough to open the semilunar (pulmonary and aortic) valves and be ejected from the heart. However, blood pressure quickly rises above that of the atria that are now relaxed and in diastole. This increase in pressure causes blood to flow back toward the atria, closing the tricuspid and mitral valves. Since blood is not being ejected from the ventricles at this early stage, the volume of blood within the chamber remains constant. Consequently, this initial phase of ventricular systole is known as isovolumic contraction, also called isovolumetric contraction (see (Figure)).

In the second phase of ventricular systole, the ventricular ejection phase, the contraction of the ventricular muscle has raised the pressure within the ventricle to the point that it is greater than the pressures in the pulmonary trunk and the aorta. Blood is pumped from the heart, pushing open the pulmonary and aortic semilunar valves. Pressure generated by the left ventricle will be appreciably greater than the pressure generated by the right ventricle, since the existing pressure in the aorta will be so much higher. Nevertheless, both ventricles pump the same amount of blood. This quantity is referred to as stroke volume. Stroke volume will normally be in the range of 70–80 mL. Since ventricular systole began with an EDV of approximately 130 mL of blood, this means that there is still 50–60 mL of blood remaining in the ventricle following contraction. This volume of blood is known as the end systolic volume (ESV).

Ventricular relaxation, or diastole, follows repolarization of the ventricles and is represented by the T wave of the ECG. It too is divided into two distinct phases and lasts approximately 430 ms.

(Figure) illustrates the relationship between the cardiac cycle and the ECG.

One of the simplest, yet effective, diagnostic techniques applied to assess the state of a patient’s heart is auscultation using a stethoscope.

In a normal, healthy heart, there are only two audible heart sounds: S1 and S2. S1 is the sound created by the closing of the atrioventricular valves during ventricular contraction and is normally described as a “lub,” or first heart sound. The second heart sound, S2, is the sound of the closing of the semilunar valves during ventricular diastole and is described as a “dub” ((Figure)). In both cases, as the valves close, the openings within the atrioventricular septum guarded by the valves will become reduced, and blood flow through the opening will become more turbulent until the valves are fully closed. There is a third heart sound, S3, but it is rarely heard in healthy individuals. It may be the sound of blood flowing into the atria, or blood sloshing back and forth in the ventricle, or even tensing of the chordae tendineae. S3 may be heard in youth, some athletes, and pregnant women. If the sound is heard later in life, it may indicate congestive heart failure, warranting further tests. Some cardiologists refer to the collective S1, S2, and S3 sounds as the “Kentucky gallop,” because they mimic those produced by a galloping horse. The fourth heart sound, S4, results from the contraction of the atria pushing blood into a stiff or hypertrophic ventricle, indicating failure of the left ventricle. S4 occurs prior to S1 and the collective sounds S4, S1, and S2 are referred to by some cardiologists as the “Tennessee gallop,” because of their similarity to the sound produced by a galloping horse with a different gait. A few individuals may have both S3 and S4, and this combined sound is referred to as S7.

Heart Sounds and the Cardiac Cycle
In this illustration, the x-axis reflects time with a recording of the heart sounds. The y-axis represents pressure. 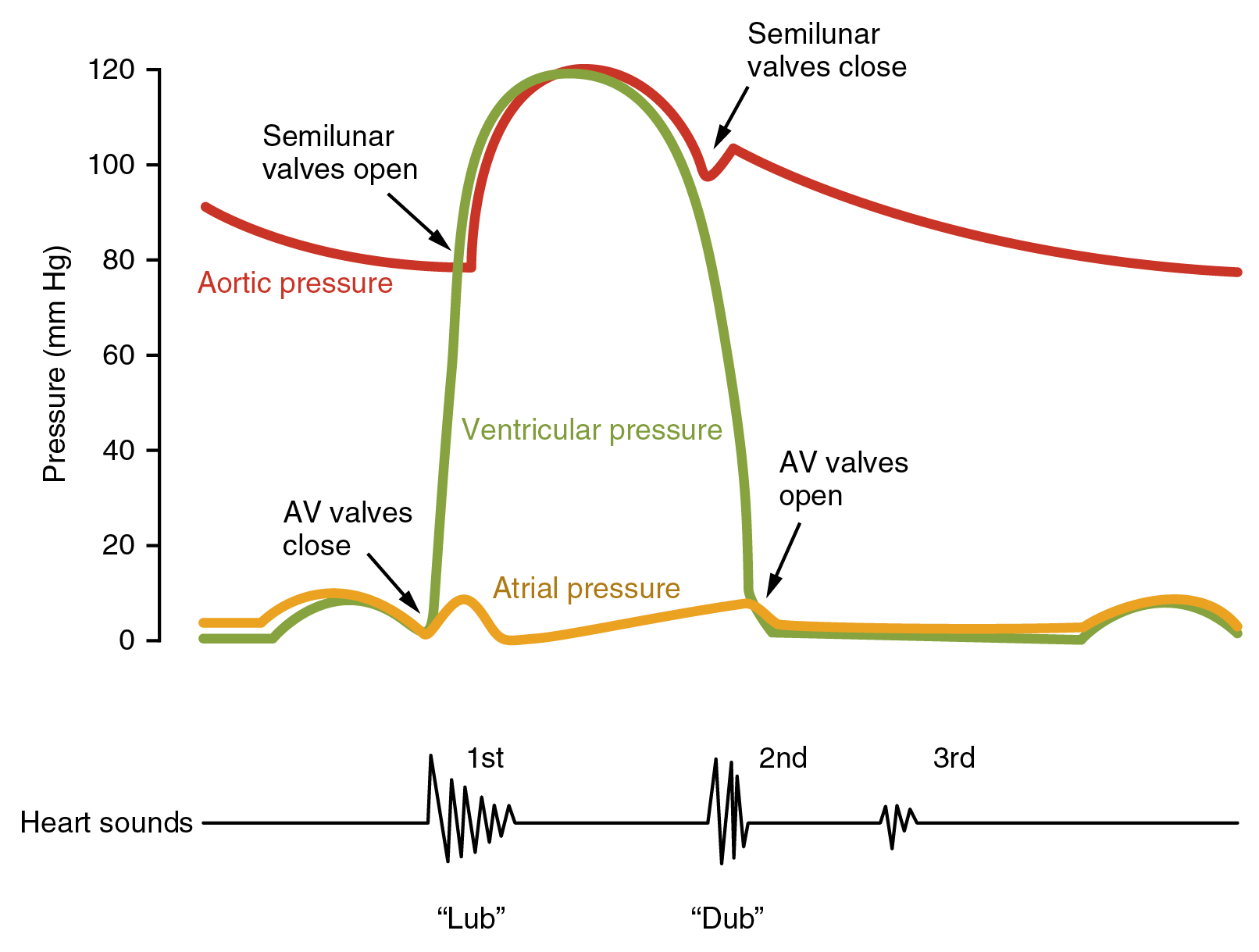 The term murmur is used to describe an unusual sound coming from the heart that is caused by the turbulent flow of blood. Murmurs are graded on a scale of 1 to 6, with 1 being the most common, the most difficult sound to detect, and the least serious. The most severe is a 6. Phonocardiograms or auscultograms can be used to record both normal and abnormal sounds using specialized electronic stethoscopes.

During auscultation, it is common practice for the clinician to ask the patient to breathe deeply. This procedure not only allows for listening to airflow, but it may also amplify heart murmurs. Inhalation increases blood flow into the right side of the heart and may increase the amplitude of right-sided heart murmurs. Expiration partially restricts blood flow into the left side of the heart and may amplify left-sided heart murmurs. (Figure) indicates proper placement of the bell of the stethoscope to facilitate auscultation.

Stethoscope Placement for Auscultation
Proper placement of the bell of the stethoscope facilitates auscultation. At each of the four locations on the chest, a different valve can be heard. 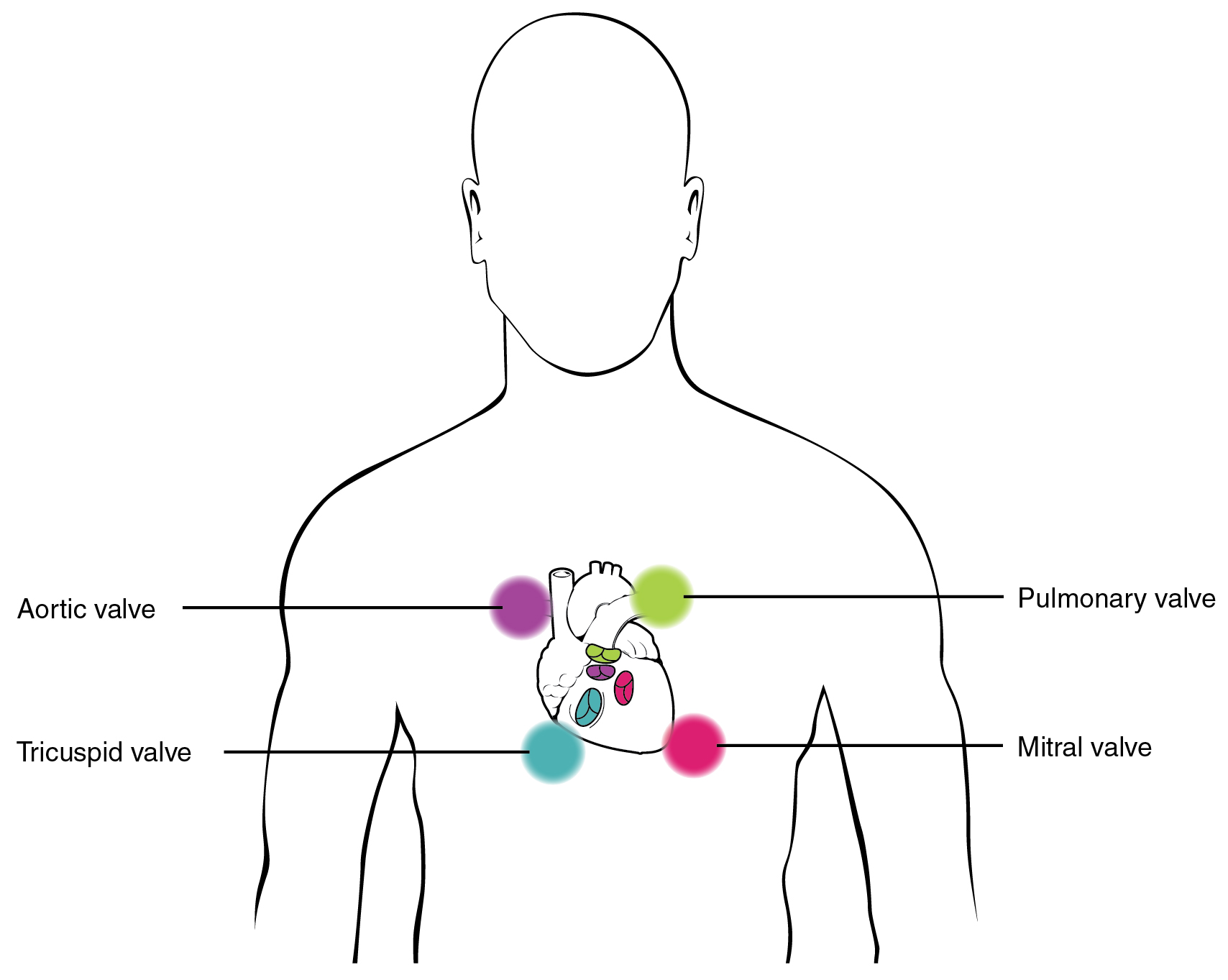 The cardiac cycle consists of a distinct relaxation and contraction phase. Which term is typically used to refer ventricular contraction while no blood is being ejected?

The first heart sound represents which portion of the cardiac cycle?

Describe one cardiac cycle, beginning with both atria and ventricles relaxed.

end diastolic volume (EDV)
(also, preload) the amount of blood in the ventricles at the end of atrial systole just prior to ventricular contraction

isovolumic contraction
(also, isovolumetric contraction) initial phase of ventricular contraction in which tension and pressure in the ventricle increase, but no blood is pumped or ejected from the heart

preload
(also, end diastolic volume) amount of blood in the ventricles at the end of atrial systole just prior to ventricular contraction

systole
period of time when the heart muscle is contracting