Development of the Appendicular Skeleton

Embryologically, the appendicular skeleton arises from mesenchyme, a type of embryonic tissue that can differentiate into many types of tissues, including bone or muscle tissue. Mesenchyme gives rise to the bones of the upper and lower limbs, as well as to the pectoral and pelvic girdles. Development of the limbs begins near the end of the fourth embryonic week, with the upper limbs appearing first. Thereafter, the development of the upper and lower limbs follows similar patterns, with the lower limbs lagging behind the upper limbs by a few days.

Each upper and lower limb initially develops as a small bulge called a limb bud, which appears on the lateral side of the early embryo. The upper limb bud appears near the end of the fourth week of development, with the lower limb bud appearing shortly after ((Figure)).

Embryo at Seven Weeks
Limb buds are visible in an embryo at the end of the seventh week of development (embryo derived from an ectopic pregnancy). (credit: Ed Uthman/flickr) 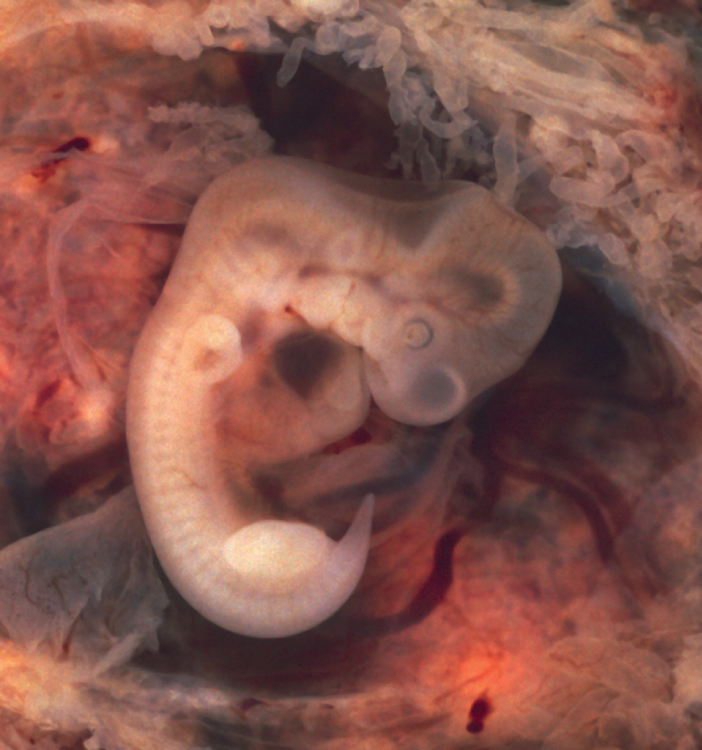 Initially, the limb buds consist of a core of mesenchyme covered by a layer of ectoderm. The ectoderm at the end of the limb bud thickens to form a narrow crest called the apical ectodermal ridge. This ridge stimulates the underlying mesenchyme to rapidly proliferate, producing the outgrowth of the developing limb. As the limb bud elongates, cells located farther from the apical ectodermal ridge slow their rates of cell division and begin to differentiate. In this way, the limb develops along a proximal-to-distal axis.

During the sixth week of development, the distal ends of the upper and lower limb buds expand and flatten into a paddle shape. This region will become the hand or foot. The wrist or ankle areas then appear as a constriction that develops at the base of the paddle. Shortly after this, a second constriction on the limb bud appears at the future site of the elbow or knee. Within the paddle, areas of tissue undergo cell death, producing separations between the growing fingers and toes. Also during the sixth week of development, mesenchyme within the limb buds begins to differentiate into hyaline cartilage that will form models of the future limb bones.

The early outgrowth of the upper and lower limb buds initially has the limbs positioned so that the regions that will become the palm of the hand or the bottom of the foot are facing medially toward the body, with the future thumb or big toe both oriented toward the head. During the seventh week of development, the upper limb rotates laterally by 90 degrees, so that the palm of the hand faces anteriorly and the thumb points laterally. In contrast, the lower limb undergoes a 90-degree medial rotation, thus bringing the big toe to the medial side of the foot.

Watch this animation to follow the development and growth of the upper and lower limb buds. On what days of embryonic development do these events occur: (a) first appearance of the upper limb bud (limb ridge); (b) the flattening of the distal limb to form the handplate or footplate; and (c) the beginning of limb rotation?

All of the girdle and limb bones, except for the clavicle, develop by the process of endochondral ossification. This process begins as the mesenchyme within the limb bud differentiates into hyaline cartilage to form cartilage models for future bones. By the twelfth week, a primary ossification center will have appeared in the diaphysis (shaft) region of the long bones, initiating the process that converts the cartilage model into bone. A secondary ossification center will appear in each epiphysis (expanded end) of these bones at a later time, usually after birth. The primary and secondary ossification centers are separated by the epiphyseal plate, a layer of growing hyaline cartilage. This plate is located between the diaphysis and each epiphysis. It continues to grow and is responsible for the lengthening of the bone. The epiphyseal plate is retained for many years, until the bone reaches its final, adult size, at which time the epiphyseal plate disappears and the epiphysis fuses to the diaphysis. (Seek additional content on ossification in the chapter on bone tissue.)

Appendicular System: Congenital Clubfoot Clubfoot, also known as talipes, is a congenital (present at birth) disorder of unknown cause and is the most common deformity of the lower limb. It affects the foot and ankle, causing the foot to be twisted inward at a sharp angle, like the head of a golf club ((Figure)). Clubfoot has a frequency of about 1 out of every 1,000 births, and is twice as likely to occur in a male child as in a female child. In 50 percent of cases, both feet are affected.

Clubfoot
Clubfoot is a common deformity of the ankle and foot that is present at birth. Most cases are corrected without surgery, and affected individuals will grow up to lead normal, active lives. (credit: James W. Hanson) 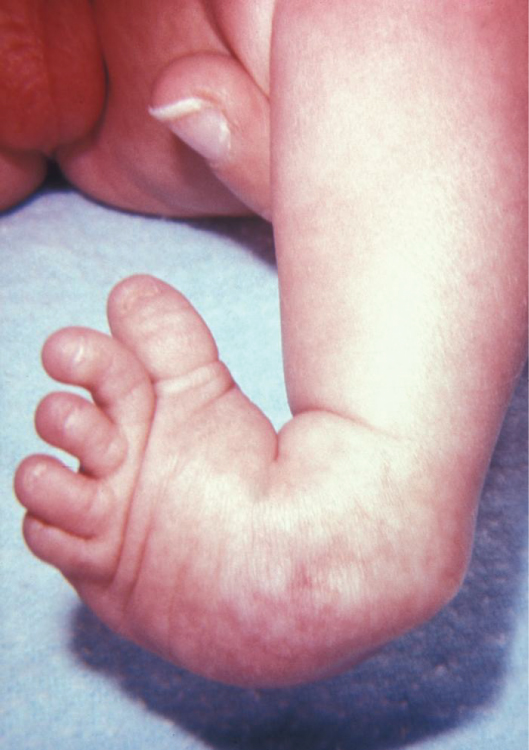 At birth, children with a clubfoot have the heel turned inward and the anterior foot twisted so that the lateral side of the foot is facing inferiorly, commonly due to ligaments or leg muscles attached to the foot that are shortened or abnormally tight. These pull the foot into an abnormal position, resulting in bone deformities. Other symptoms may include bending of the ankle that lifts the heel of the foot and an extremely high foot arch. Due to the limited range of motion in the affected foot, it is difficult to place the foot into the correct position. Additionally, the affected foot may be shorter than normal, and the calf muscles are usually underdeveloped on the affected side. Despite the appearance, this is not a painful condition for newborns. However, it must be treated early to avoid future pain and impaired walking ability.

Although the cause of clubfoot is idiopathic (unknown), evidence indicates that fetal position within the uterus is not a contributing factor. Genetic factors are involved, because clubfoot tends to run within families. Cigarette smoking during pregnancy has been linked to the development of clubfoot, particularly in families with a history of clubfoot.

Previously, clubfoot required extensive surgery. Today, 90 percent of cases are successfully treated without surgery using new corrective casting techniques. The best chance for a full recovery requires that clubfoot treatment begin during the first 2 weeks after birth. Corrective casting gently stretches the foot, which is followed by the application of a holding cast to keep the foot in the proper position. This stretching and casting is repeated weekly for several weeks. In severe cases, surgery may also be required, after which the foot typically remains in a cast for 6 to 8 weeks. After the cast is removed following either surgical or nonsurgical treatment, the child will be required to wear a brace part-time (at night) for up to 4 years. In addition, special exercises will be prescribed, and the child must also wear special shoes. Close monitoring by the parents and adherence to postoperative instructions are imperative in minimizing the risk of relapse.

The bones of the appendicular skeleton arise from embryonic mesenchyme. Limb buds appear at the end of the fourth week. The apical ectodermal ridge, located at the end of the limb bud, stimulates growth and elongation of the limb. During the sixth week, the distal end of the limb bud becomes paddle-shaped, and selective cell death separates the developing fingers and toes. At the same time, mesenchyme within the limb bud begins to differentiate into hyaline cartilage, forming models for future bones. During the seventh week, the upper limbs rotate laterally and the lower limbs rotate medially, bringing the limbs into their final positions.

The clavicle develops via intramembranous ossification, in which mesenchyme is converted directly into bone tissue. Ossification within the clavicle begins during the fifth week of development and continues until 25 years of age.

Watch this animation to follow the development and growth of the upper and lower limb buds. On what days of embryonic development do these events occur: (a) first appearance of the upper limb bud (limb ridge); (b) the flattening of the distal limb to form the handplate or footplate; and (c) the beginning of limb rotation?

Which event takes place during the seventh week of development?

During endochondral ossification of a long bone, ________.

How can a radiograph of a child’s femur be used to determine the approximate age of that child?

A radiograph (X-ray image) of a child’s femur will show the epiphyseal plates associated with each secondary ossification center. These plates of hyaline cartilage will appear dark in comparison to the white imaging of the ossified bone. Since each epiphyseal plate appears and disappears at a different age, the presence or absence of these plates can be used to give an approximate age for the child. For example, the epiphyseal plate located at the base of the lesser trochanter of the femur appears at age 9–10 years and disappears at puberty (approximately 11 years of age). Thus, a child’s radiograph that shows the presence of the lesser trochanter epiphyseal plate indicates an approximate age of 10 years.

Unlike other bones of the appendicular skeleton, the clavicle develops by the process of intramembranous ossification. In this process, embryonic mesenchyme accumulates at the site of the future bone and then differentiates directly into bone-producing tissue. Because of this direct and early production of bone, the clavicle is the first bone of the skeleton to begin to ossify. However, the growth and enlargement of the clavicle continues throughout childhood and adolescence, and thus, it is not fully ossified until 25 years of age.

limb bud
small elevation that appears on the lateral side of the embryo during the fourth or fifth week of development, which gives rise to an upper or lower limb