The purpose of the respiratory system is to perform gas exchange. Pulmonary ventilation provides air to the alveoli for this gas exchange process. At the respiratory membrane, where the alveolar and capillary walls meet, gases move across the membranes, with oxygen entering the bloodstream and carbon dioxide exiting. It is through this mechanism that blood is oxygenated and carbon dioxide, the waste product of cellular respiration, is removed from the body.

In order to understand the mechanisms of gas exchange in the lung, it is important to understand the underlying principles of gases and their behavior. In addition to Boyle’s law, several other gas laws help to describe the behavior of gases.

Solubility of Gases in Liquids

Henry’s law describes the behavior of gases when they come into contact with a liquid, such as blood. Henry’s law states that the concentration of gas in a liquid is directly proportional to the solubility and partial pressure of that gas. The greater the partial pressure of the gas, the greater the number of gas molecules that will dissolve in the liquid. The concentration of the gas in a liquid is also dependent on the solubility of the gas in the liquid. For example, although nitrogen is present in the atmosphere, very little nitrogen dissolves into the blood, because the solubility of nitrogen in blood is very low. The exception to this occurs in scuba divers; the composition of the compressed air that divers breathe causes nitrogen to have a higher partial pressure than normal, causing it to dissolve in the blood in greater amounts than normal. Too much nitrogen in the bloodstream results in a serious condition that can be fatal if not corrected. Gas molecules establish an equilibrium between those molecules dissolved in liquid and those in air.

Gas exchange occurs at two sites in the body: in the lungs, where oxygen is picked up and carbon dioxide is released at the respiratory membrane, and at the tissues, where oxygen is released and carbon dioxide is picked up. External respiration is the exchange of gases with the external environment, and occurs in the alveoli of the lungs. Internal respiration is the exchange of gases with the internal environment, and occurs in the tissues. The actual exchange of gases occurs due to simple diffusion. Energy is not required to move oxygen or carbon dioxide across membranes. Instead, these gases follow pressure gradients that allow them to diffuse. The anatomy of the lung maximizes the diffusion of gases: The respiratory membrane is highly permeable to gases; the respiratory and blood capillary membranes are very thin; and there is a large surface area throughout the lungs.

The pulmonary artery carries deoxygenated blood into the lungs from the heart, where it branches and eventually becomes the capillary network composed of pulmonary capillaries. These pulmonary capillaries create the respiratory membrane with the alveoli ((Figure)). As the blood is pumped through this capillary network, gas exchange occurs. Although a small amount of the oxygen is able to dissolve directly into plasma from the alveoli, most of the oxygen is picked up by erythrocytes (red blood cells) and binds to a protein called hemoglobin, a process described later in this chapter. Oxygenated hemoglobin is red, causing the overall appearance of bright red oxygenated blood, which returns to the heart through the pulmonary veins. Carbon dioxide is released in the opposite direction of oxygen, from the blood to the alveoli. Some of the carbon dioxide is returned on hemoglobin, but can also be dissolved in plasma or is present as a converted form, also explained in greater detail later in this chapter.

External respiration occurs as a function of partial pressure differences in oxygen and carbon dioxide between the alveoli and the blood in the pulmonary capillaries. 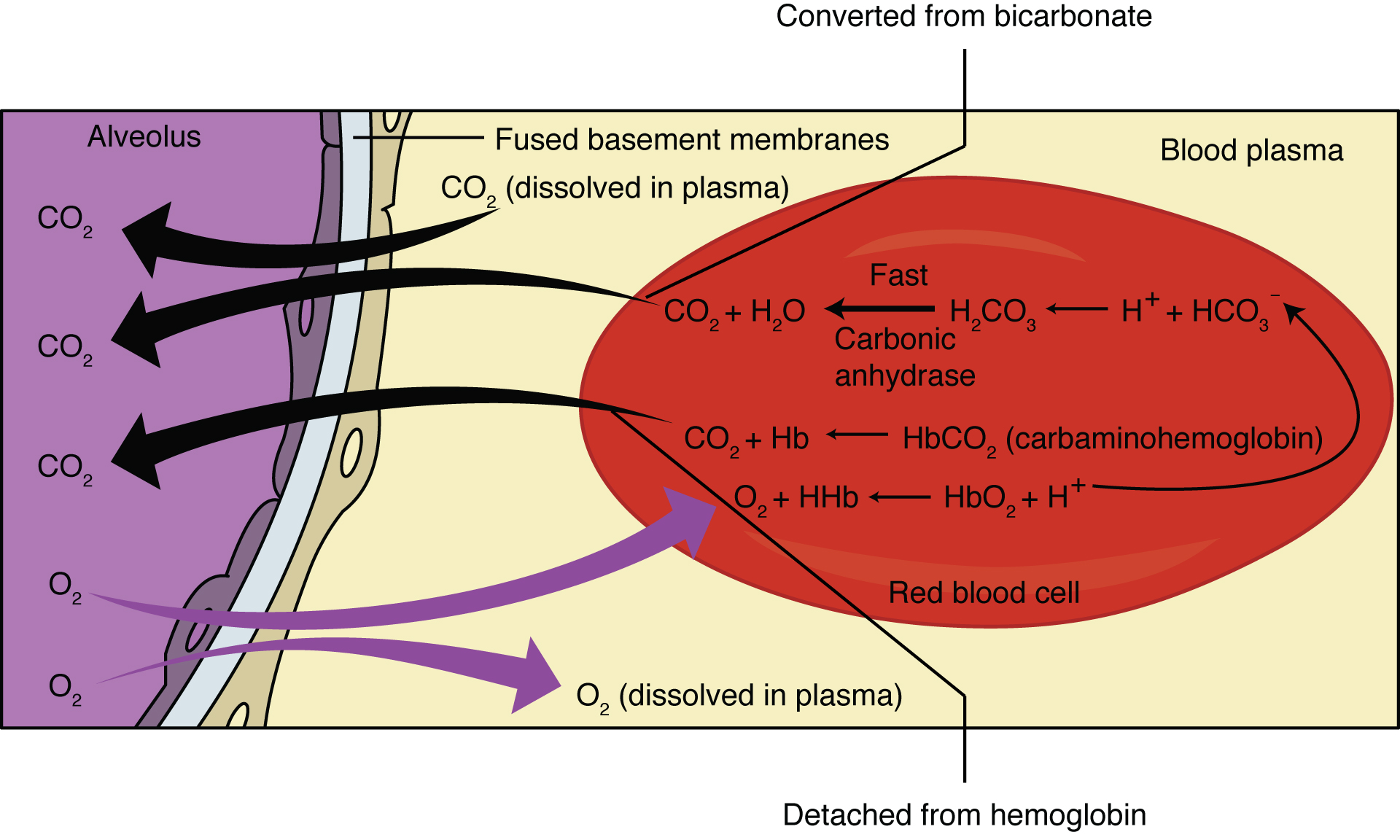 Hyperbaric Chamber Treatment A type of device used in some areas of medicine that exploits the behavior of gases is hyperbaric chamber treatment. A hyperbaric chamber is a unit that can be sealed and expose a patient to either 100 percent oxygen with increased pressure or a mixture of gases that includes a higher concentration of oxygen than normal atmospheric air, also at a higher partial pressure than the atmosphere. There are two major types of chambers: monoplace and multiplace. Monoplace chambers are typically for one patient, and the staff tending to the patient observes the patient from outside of the chamber ((Figure)). Some facilities have special monoplace hyperbaric chambers that allow multiple patients to be treated at once, usually in a sitting or reclining position, to help ease feelings of isolation or claustrophobia. Multiplace chambers are large enough for multiple patients to be treated at one time, and the staff attending these patients is present inside the chamber. In a multiplace chamber, patients are often treated with air via a mask or hood, and the chamber is pressurized. 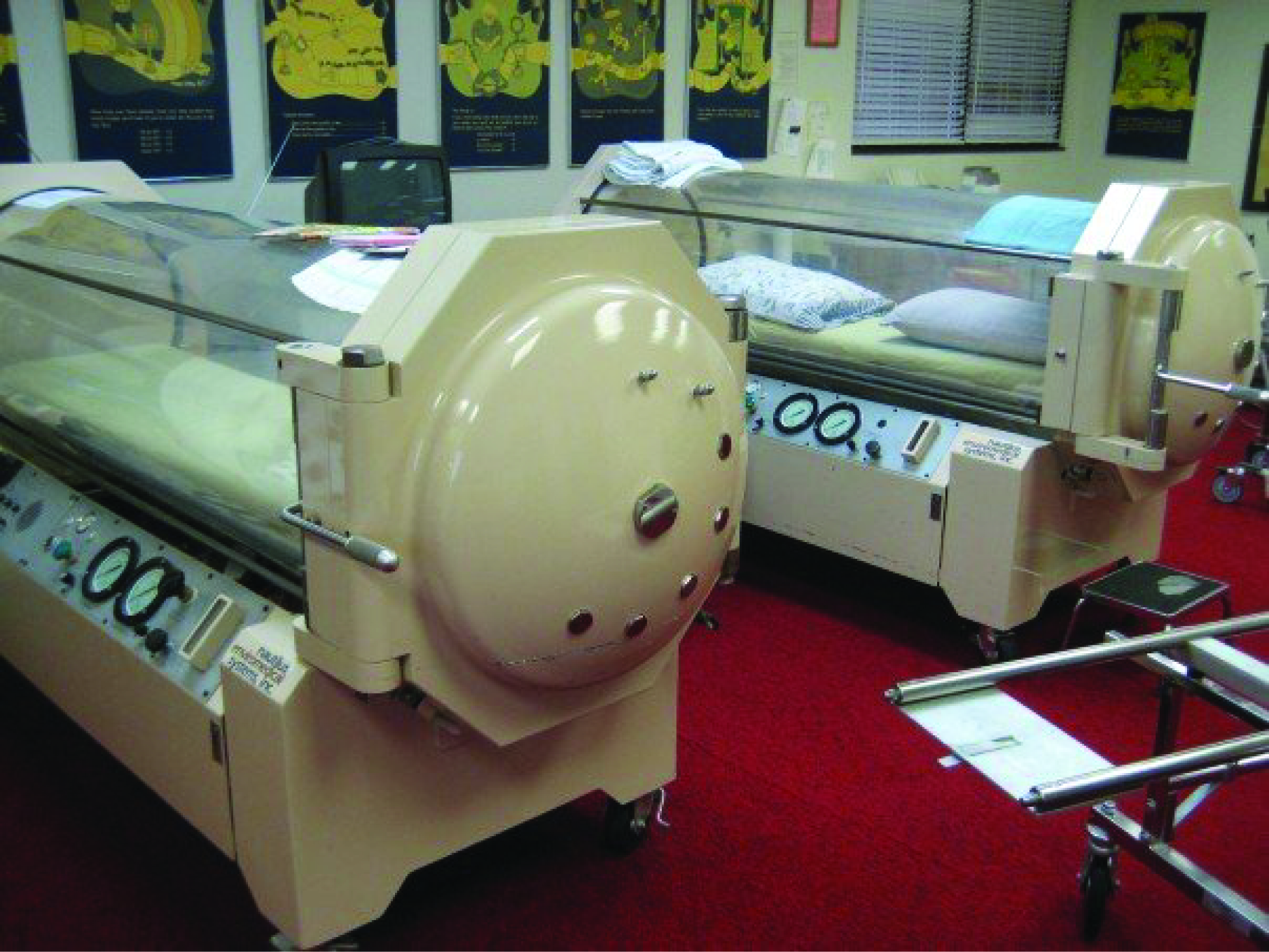 Hyperbaric chamber treatment is based on the behavior of gases. As you recall, gases move from a region of higher partial pressure to a region of lower partial pressure. In a hyperbaric chamber, the atmospheric pressure is increased, causing a greater amount of oxygen than normal to diffuse into the bloodstream of the patient. Hyperbaric chamber therapy is used to treat a variety of medical problems, such as wound and graft healing, anaerobic bacterial infections, and carbon monoxide poisoning. Exposure to and poisoning by carbon monoxide is difficult to reverse, because hemoglobin’s affinity for carbon monoxide is much stronger than its affinity for oxygen, causing carbon monoxide to replace oxygen in the blood. Hyperbaric chamber therapy can treat carbon monoxide poisoning, because the increased atmospheric pressure causes more oxygen to diffuse into the bloodstream. At this increased pressure and increased concentration of oxygen, carbon monoxide is displaced from hemoglobin. Another example is the treatment of anaerobic bacterial infections, which are created by bacteria that cannot or prefer not to live in the presence of oxygen. An increase in blood and tissue levels of oxygen helps to kill the anaerobic bacteria that are responsible for the infection, as oxygen is toxic to anaerobic bacteria. For wounds and grafts, the chamber stimulates the healing process by increasing energy production needed for repair. Increasing oxygen transport allows cells to ramp up cellular respiration and thus ATP production, the energy needed to build new structures.

The behavior of gases can be explained by the principles of Dalton’s law and Henry’s law, both of which describe aspects of gas exchange. Dalton’s law states that each specific gas in a mixture of gases exerts force (its partial pressure) independently of the other gases in the mixture. Henry’s law states that the amount of a specific gas that dissolves in a liquid is a function of its partial pressure. The greater the partial pressure of a gas, the more of that gas will dissolve in a liquid, as the gas moves toward equilibrium. Gas molecules move down a pressure gradient; in other words, gas moves from a region of high pressure to a region of low pressure. The partial pressure of oxygen is high in the alveoli and low in the blood of the pulmonary capillaries. As a result, oxygen diffuses across the respiratory membrane from the alveoli into the blood. In contrast, the partial pressure of carbon dioxide is high in the pulmonary capillaries and low in the alveoli. Therefore, carbon dioxide diffuses across the respiratory membrane from the blood into the alveoli. The amount of oxygen and carbon dioxide that diffuses across the respiratory membrane is similar.

When ventilation is not sufficient, which of the following occurs?

Gas exchange that occurs at the level of the tissues is called ________.

A smoker develops damage to several alveoli that then can no longer function. How does this affect gas exchange?

external respiration
gas exchange that occurs in the alveoli

ventilation
movement of air into and out of the lungs; consists of inspiration and expiration