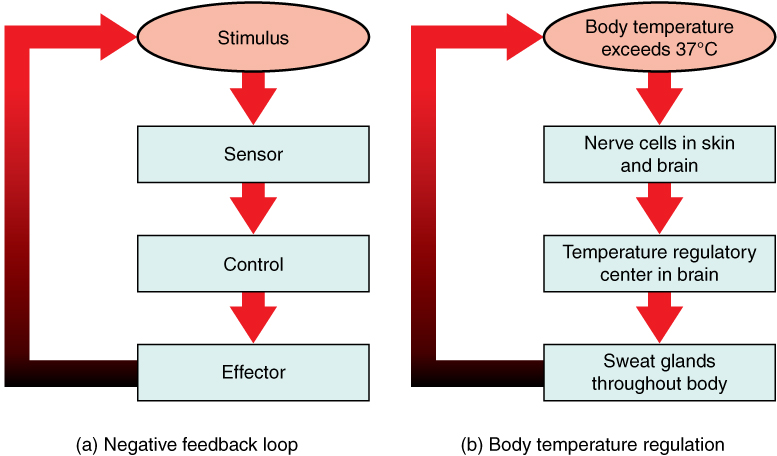 In order to set the system in motion, a stimulus must drive a physiological parameter beyond its normal range (that is, beyond homeostasis). This stimulus is “heard” by a specific sensor. For example, in the control of blood glucose, specific endocrine cells in the pancreas detect excess glucose (the stimulus) in the bloodstream. These pancreatic beta cells respond to the increased level of blood glucose by releasing the hormone insulin into the bloodstream. The insulin signals skeletal muscle fibers, fat cells (adipocytes), and liver cells to take up the excess glucose, removing it from the bloodstream. As glucose concentration in the bloodstream drops, the decrease in concentration—the actual negative feedback—is detected by pancreatic alpha cells, and insulin release stops. This prevents blood sugar levels from continuing to drop below the normal range.

Humans have a similar temperature regulation feedback system that works by promoting either heat loss or heat gain ((Figure)b). When the brain’s temperature regulation center receives data from the sensors indicating that the body’s temperature exceeds its normal range, it stimulates a cluster of brain cells referred to as the “heat-loss center.” This stimulation has three major effects:

In contrast, activation of the brain’s heat-gain center by exposure to cold reduces blood flow to the skin, and blood returning from the limbs is diverted into a network of deep veins. This arrangement traps heat closer to the body core and restricts heat loss. If heat loss is severe, the brain triggers an increase in random signals to skeletal muscles, causing them to contract and producing shivering. The muscle contractions of shivering release heat while using up ATP. The brain triggers the thyroid gland in the endocrine system to release thyroid hormone, which increases metabolic activity and heat production in cells throughout the body. The brain also signals the adrenal glands to release epinephrine (adrenaline), a hormone that causes the breakdown of glycogen into glucose, which can be used as an energy source. The breakdown of glycogen into glucose also results in increased metabolism and heat production.

Childbirth at full term is an example of a situation in which the maintenance of the existing body state is not desired. Enormous changes in the mother’s body are required to expel the baby at the end of pregnancy. And the events of childbirth, once begun, must progress rapidly to a conclusion or the life of the mother and the baby are at risk. The extreme muscular work of labor and delivery are the result of a positive feedback system ((Figure)). 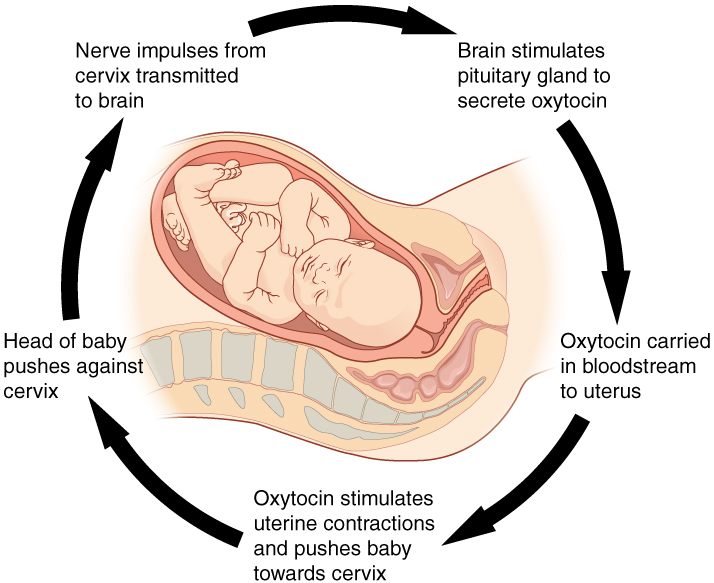 The first contractions of labor (the stimulus) push the baby toward the cervix (the lowest part of the uterus). The cervix contains stretch-sensitive nerve cells that monitor the degree of stretching (the sensors). These nerve cells send messages to the brain, which in turn causes the pituitary gland at the base of the brain to release the hormone oxytocin into the bloodstream. Oxytocin causes stronger contractions of the smooth muscles in of the uterus (the effectors), pushing the baby further down the birth canal. This causes even greater stretching of the cervix. The cycle of stretching, oxytocin release, and increasingly more forceful contractions stops only when the baby is born. At this point, the stretching of the cervix halts, stopping the release of oxytocin.

A second example of positive feedback centers on reversing extreme damage to the body. Following a penetrating wound, the most immediate threat is excessive blood loss. Less blood circulating means reduced blood pressure and reduced perfusion (penetration of blood) to the brain and other vital organs. If perfusion is severely reduced, vital organs will shut down and the person will die. The body responds to this potential catastrophe by releasing substances in the injured blood vessel wall that begin the process of blood clotting. As each step of clotting occurs, it stimulates the release of more clotting substances. This accelerates the processes of clotting and sealing off the damaged area. Clotting is contained in a local area based on the tightly controlled availability of clotting proteins. This is an adaptive, life-saving cascade of events.

After you eat lunch, nerve cells in your stomach respond to the distension (the stimulus) resulting from the food. They relay this information to ________.

Which of the following is an example of a normal physiologic process that uses a positive feedback loop?

The four components of a negative feedback loop are: stimulus, sensor, control center, and effector. If too great a quantity of the chemical were excreted, sensors would activate a control center, which would in turn activate an effector. In this case, the effector (the secreting cells) would be adjusted downward.

What regulatory processes would your body use if you were trapped by a blizzard in an unheated, uninsulated cabin in the woods?

Any prolonged exposure to extreme cold would activate the brain’s heat-gain center. This would reduce blood flow to your skin, and shunt blood returning from your limbs away from the digits and into a network of deep veins. Your brain’s heat-gain center would also increase your muscle contraction, causing you to shiver. This increases the energy consumption of skeletal muscle and generates more heat. Your body would also produce thyroid hormone and epinephrine, chemicals that promote increased metabolism and heat production.

control center
compares values to their normal range; deviations cause the activation of an effector

effector
organ that can cause a change in a value

negative feedback
homeostatic mechanism that tends to stabilize an upset in the body’s physiological condition by preventing an excessive response to a stimulus, typically as the stimulus is removed