Neurological Exam
Health care professionals, such as this air force nurse, can rapidly assess the neurological functions of a patient using the neurological exam. One part of the exam is the inspection of the oral cavity and pharynx, which enables the doctor to not only inspect the tissues for signs of infection, but also provides a means to test the functions of the cranial nerves associated with the oral cavity. (credit: U.S. Department of Defense) 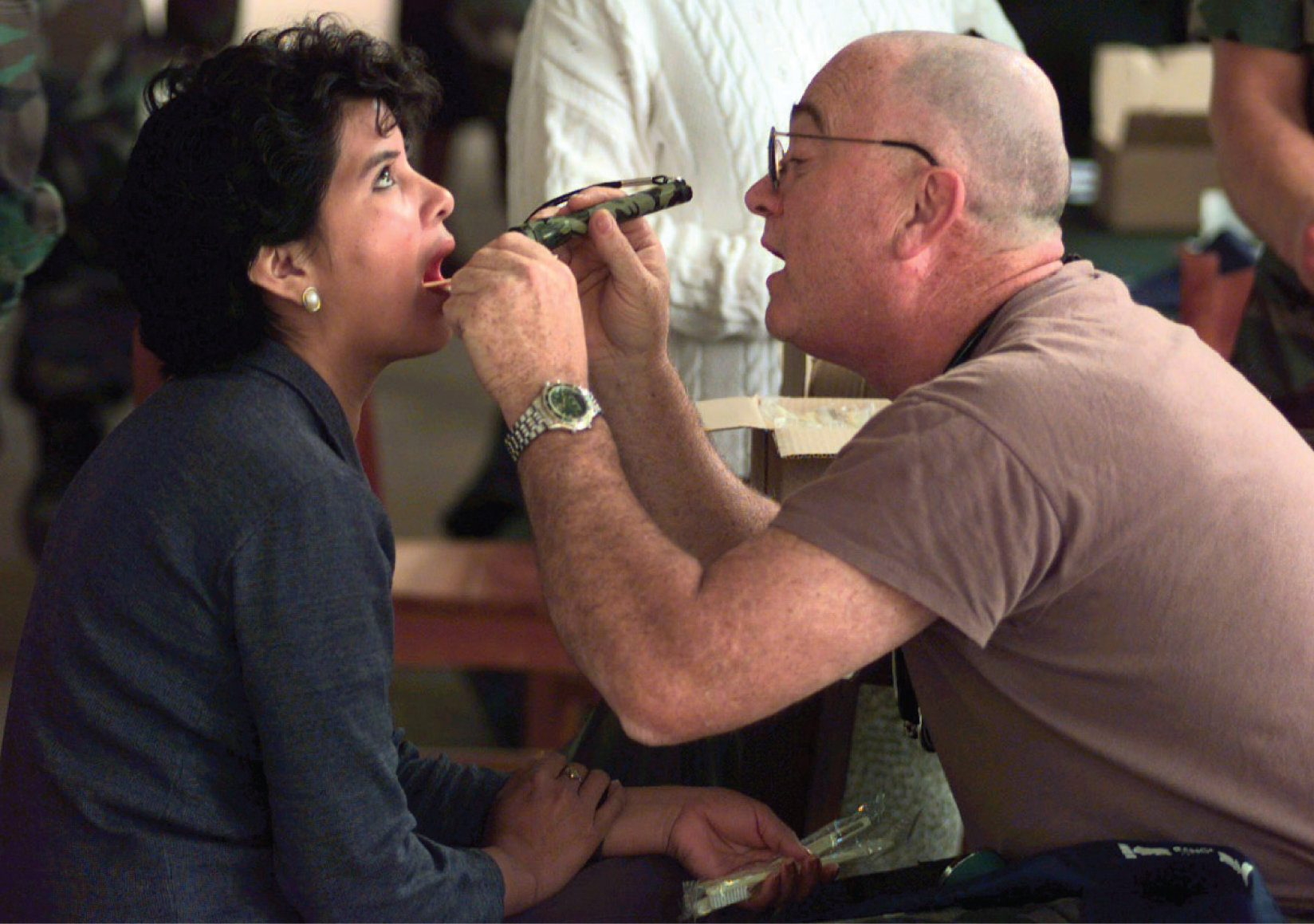 A man arrives at the hospital after feeling faint and complaining of a “pins-and-needles” feeling all along one side of his body. The most likely explanation is that he has suffered a stroke, which has caused a loss of oxygen to a particular part of the central nervous system (CNS). The problem is finding where in the entire nervous system the stroke has occurred. By checking reflexes, sensory responses, and motor control, a health care provider can focus on what abilities the patient may have lost as a result of the stroke and can use this information to determine where the injury occurred. In the emergency department of the hospital, this kind of rapid assessment of neurological function is key to treating trauma to the nervous system. In the classroom, the neurological exam is a valuable tool for learning the anatomy and physiology of the nervous system because it allows you to relate the functions of the system to particular locations in the nervous system.

Nervous tissue is different from other tissues in that it is not classified into separate tissue types. It does contain two types of cells, neurons and glia, but it is all just nervous tissue. White matter and gray matter are not types of nervous tissue, but indications of different specializations within the nervous tissue. However, not all nervous tissue performs the same function. Furthermore, specific functions are not wholly localized to individual brain structures in the way that other bodily functions occur strictly within specific organs. In the CNS, we must consider the connections between cells over broad areas, not just the function of cells in one particular nucleus or region. In a broad sense, the nervous system is responsible for the majority of electrochemical signaling in the body, but the use of those signals is different in various regions.

The nervous system is made up of the brain and spinal cord as the central organs, and the ganglia and nerves as organs in the periphery. The brain and spinal cord can be thought of as a collection of smaller organs, most of which would be the nuclei (such as the oculomotor nuclei), but white matter structures play an important role (such as the corpus callosum). Studying the nervous system requires an understanding of the varied physiology of the nervous system. For example, the hypothalamus plays a very different role than the visual cortex. The neurological exam provides a way to elicit behavior that represents those varied functions.