Microscopic Anatomy of the Kidney

The renal structures that conduct the essential work of the kidney cannot be seen by the naked eye. Only a light or electron microscope can reveal these structures. Even then, serial sections and computer reconstruction are necessary to give us a comprehensive view of the functional anatomy of the nephron and its associated blood vessels.

Nephrons take a simple filtrate of the blood and modify it into urine. Many changes take place in the different parts of the nephron before urine is created for disposal. The term forming urine will be used hereafter to describe the filtrate as it is modified into true urine. The principle task of the nephron population is to balance the plasma to homeostatic set points and excrete potential toxins in the urine. They do this by accomplishing three principle functions—filtration, reabsorption, and secretion. They also have additional secondary functions that exert control in three areas: blood pressure (via production of renin), red blood cell production (via the hormone EPO), and calcium absorption (via conversion of calcidiol into calcitriol, the active form of vitamin D).

As discussed earlier, the renal corpuscle consists of a tuft of capillaries called the glomerulus that is largely surrounded by Bowman’s (glomerular) capsule. The glomerulus is a high-pressure capillary bed between afferent and efferent arterioles. Bowman’s capsule surrounds the glomerulus to form a lumen, and captures and directs this filtrate to the PCT. The outermost part of Bowman’s capsule, the parietal layer, is a simple squamous epithelium. It transitions onto the glomerular capillaries in an intimate embrace to form the visceral layer of the capsule. Here, the cells are not squamous, but uniquely shaped cells (podocytes) extending finger-like arms (pedicels) to cover the glomerular capillaries ((Figure)). These projections interdigitate to form filtration slits, leaving small gaps between the digits to form a sieve. As blood passes through the glomerulus, 10 to 20 percent of the plasma filters between these sieve-like fingers to be captured by Bowman’s capsule and funneled to the PCT. Where the fenestrae (windows) in the glomerular capillaries match the spaces between the podocyte “fingers,” the only thing separating the capillary lumen and the lumen of Bowman’s capsule is their shared basement membrane ((Figure)). These three features comprise what is known as the filtration membrane. This membrane permits very rapid movement of filtrate from capillary to capsule though pores that are only 70 nm in diameter.

Podocytes
Podocytes interdigitate with structures called pedicels and filter substances in a way similar to fenestrations. In (a), the large cell body can be seen at the top right corner, with branches extending from the cell body. The smallest finger-like extensions are the pedicels. Pedicels on one podocyte always interdigitate with the pedicels of another podocyte. (b) This capillary has three podocytes wrapped around it.

Fenestrated Capillary
Fenestrations allow many substances to diffuse from the blood based primarily on size. 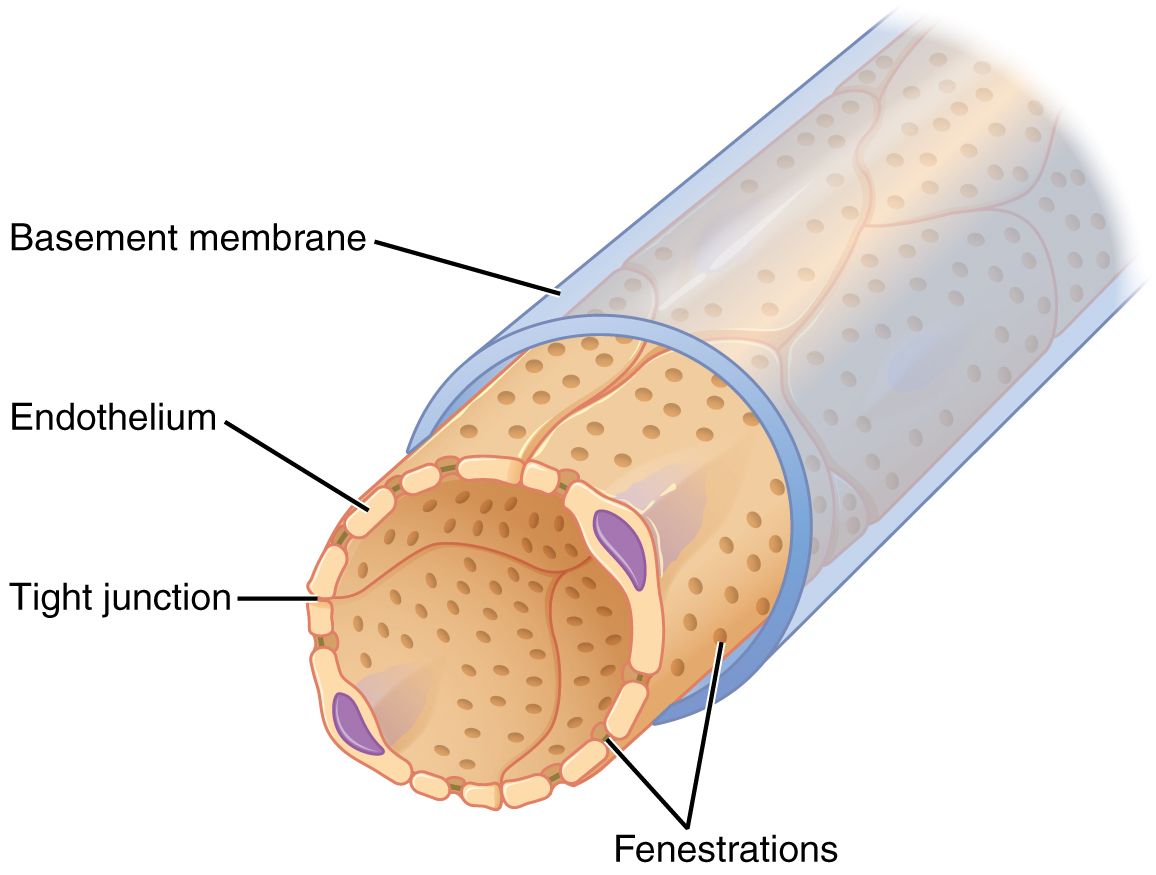 Lying just outside Bowman’s capsule and the glomerulus is the juxtaglomerular apparatus (JGA) ((Figure)). At the juncture where the afferent and efferent arterioles enter and leave Bowman’s capsule, the initial part of the distal convoluted tubule (DCT) comes into direct contact with the arterioles. The wall of the DCT at that point forms a part of the JGA known as the macula densa. This cluster of cuboidal epithelial cells monitors the fluid composition of fluid flowing through the DCT. In response to the concentration of Na+ in the fluid flowing past them, these cells release paracrine signals. They also have a single, nonmotile cilium that responds to the rate of fluid movement in the tubule. The paracrine signals released in response to changes in flow rate and Na+ concentration are adenosine triphosphate (ATP) and adenosine.

Juxtaglomerular Apparatus and Glomerulus
(a) The JGA allows specialized cells to monitor the composition of the fluid in the DCT and adjust the glomerular filtration rate. (b) This micrograph shows the glomerulus and surrounding structures. LM × 1540. (Micrograph provided by the Regents of University of Michigan Medical School © 2012)

A second cell type in this apparatus is the juxtaglomerular cell. This is a modified, smooth muscle cell lining the afferent arteriole that can contract or relax in response to ATP or adenosine released by the macula densa. Such contraction and relaxation regulate blood flow to the glomerulus. If the osmolarity of the filtrate is too high (hyperosmotic), the juxtaglomerular cells will contract, decreasing the glomerular filtration rate (GFR) so less plasma is filtered, leading to less urine formation and greater retention of fluid. This will ultimately decrease blood osmolarity toward the physiologic norm. If the osmolarity of the filtrate is too low, the juxtaglomerular cells will relax, increasing the GFR and enhancing the loss of water to the urine, causing blood osmolarity to rise. In other words, when osmolarity goes up, filtration and urine formation decrease and water is retained. When osmolarity goes down, filtration and urine formation increase and water is lost by way of the urine. The net result of these opposing actions is to keep the rate of filtration relatively constant. A second function of the macula densa cells is to regulate renin release from the juxtaglomerular cells of the afferent arteriole ((Figure)). Active renin is a protein comprised of 304 amino acids that cleaves several amino acids from angiotensinogen to produce angiotensin I. Angiotensin I is not biologically active until converted to angiotensin II by angiotensin-converting enzyme (ACE) from the lungs. Angiotensin II is a systemic vasoconstrictor that helps to regulate blood pressure by increasing it. Angiotensin II also stimulates the release of the steroid hormone aldosterone from the adrenal cortex. Aldosterone stimulates Na+ reabsorption by the kidney, which also results in water retention and increased blood pressure. 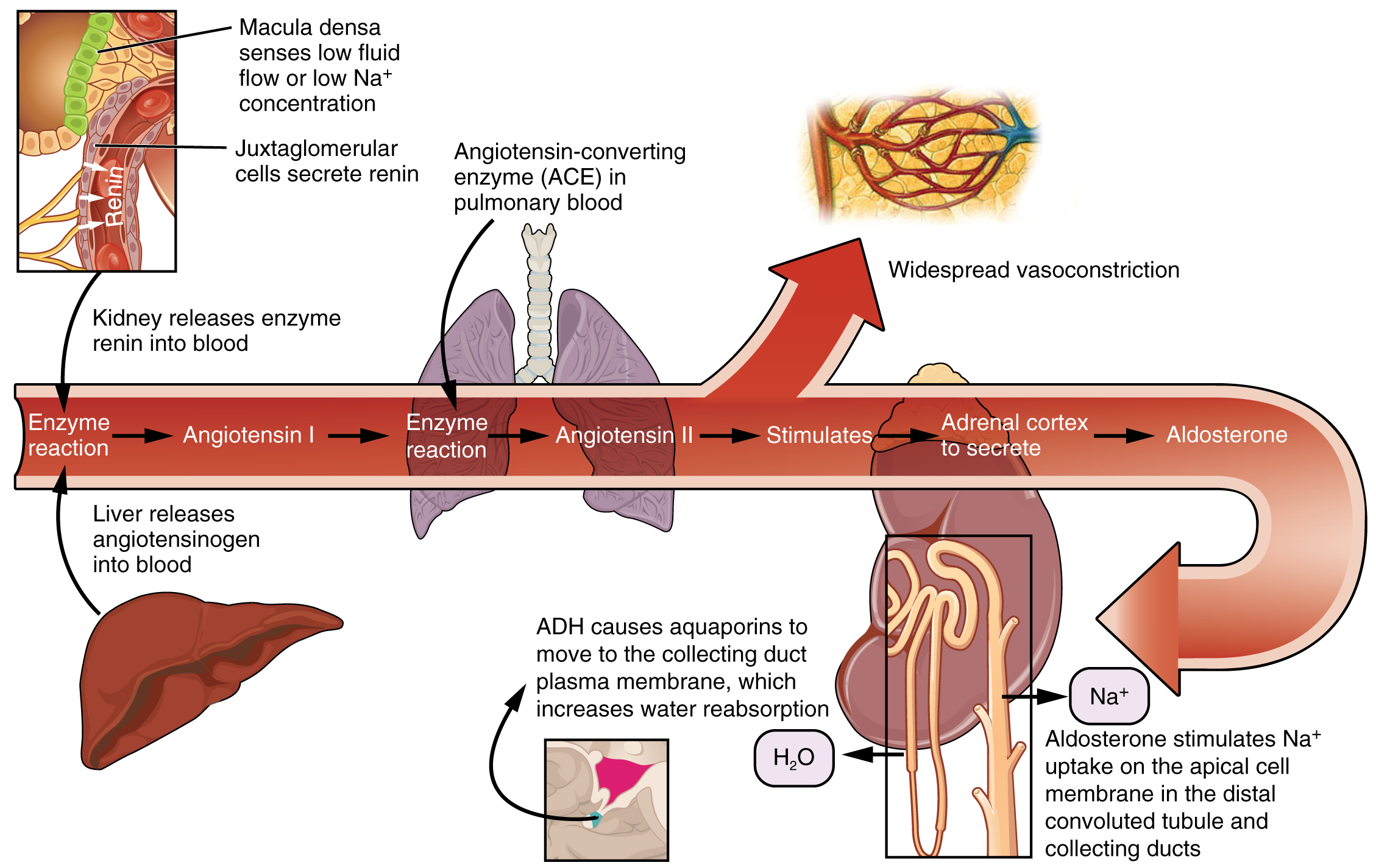 Filtered fluid collected by Bowman’s capsule enters into the PCT. It is called convoluted due to its tortuous path. Simple cuboidal cells form this tubule with prominent microvilli on the luminal surface, forming a brush border. These microvilli create a large surface area to maximize the absorption and secretion of solutes (Na+, Cl–, glucose, etc.), the most essential function of this portion of the nephron. These cells actively transport ions across their membranes, so they possess a high concentration of mitochondria in order to produce sufficient ATP.

The DCT, like the PCT, is very tortuous and formed by simple cuboidal epithelium, but it is shorter than the PCT. These cells are not as active as those in the PCT; thus, there are fewer microvilli on the apical surface. However, these cells must also pump ions against their concentration gradient, so you will find of large numbers of mitochondria, although fewer than in the PCT.

The collecting ducts are continuous with the nephron but not technically part of it. In fact, each duct collects filtrate from several nephrons for final modification. Collecting ducts merge as they descend deeper in the medulla to form about 30 terminal ducts, which empty at a papilla. They are lined with simple squamous epithelium with receptors for ADH. When stimulated by ADH, these cells will insert aquaporin channel proteins into their membranes, which as their name suggests, allow water to pass from the duct lumen through the cells and into the interstitial spaces to be recovered by the vasa recta. This process allows for the recovery of large amounts of water from the filtrate back into the blood. In the absence of ADH, these channels are not inserted, resulting in the excretion of water in the form of dilute urine. Most, if not all, cells of the body contain aquaporin molecules, whose channels are so small that only water can pass. At least 10 types of aquaporins are known in humans, and six of those are found in the kidney. The function of all aquaporins is to allow the movement of water across the lipid-rich, hydrophobic cell membrane ((Figure)).

Aquaporin Water Channel
Positive charges inside the channel prevent the leakage of electrolytes across the cell membrane, while allowing water to move due to osmosis. 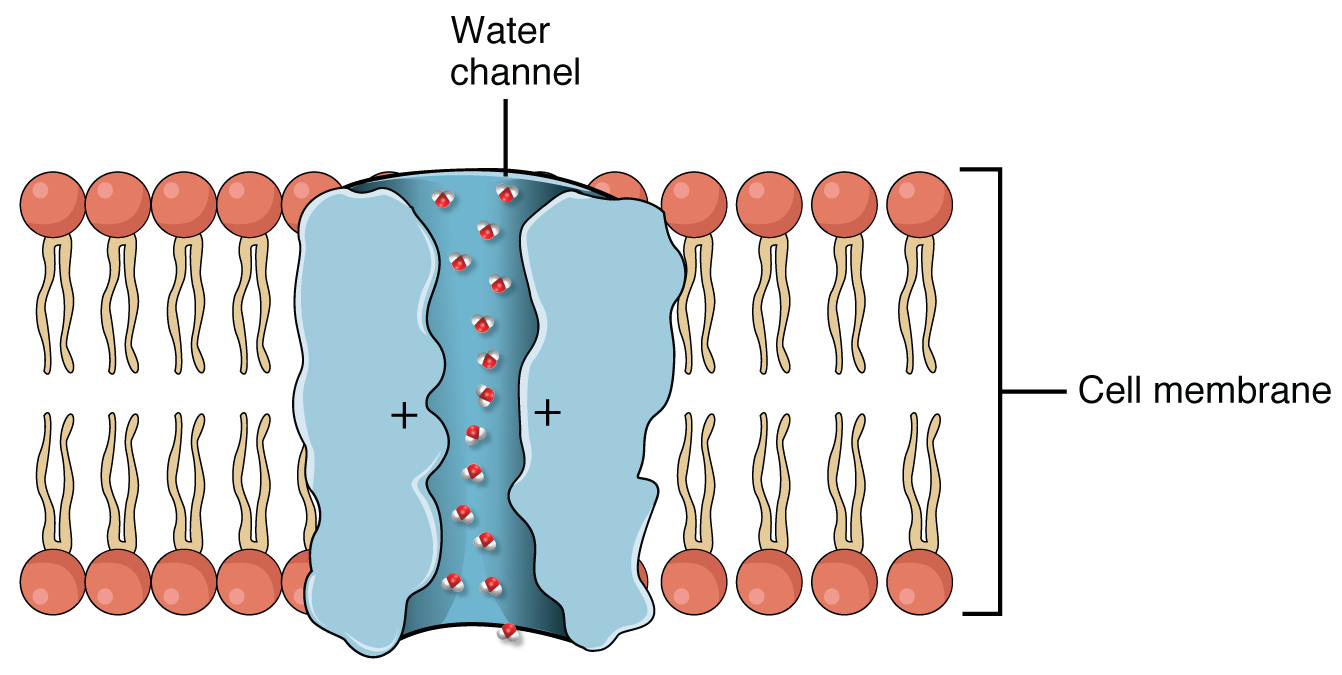 The functional unit of the kidney, the nephron, consists of the renal corpuscle, PCT, loop of Henle, and DCT. Cortical nephrons have short loops of Henle, whereas juxtamedullary nephrons have long loops of Henle extending into the medulla. About 15 percent of nephrons are juxtamedullary. The glomerulus is a capillary bed that filters blood principally based on particle size. The filtrate is captured by Bowman’s capsule and directed to the PCT. A filtration membrane is formed by the fused basement membranes of the podocytes and the capillary endothelial cells that they embrace. Contractile mesangial cells further perform a role in regulating the rate at which the blood is filtered. Specialized cells in the JGA produce paracrine signals to regulate blood flow and filtration rates of the glomerulus. Other JGA cells produce the enzyme renin, which plays a central role in blood pressure regulation. The filtrate enters the PCT where absorption and secretion of several substances occur. The descending and ascending limbs of the loop of Henle consist of thick and thin segments. Absorption and secretion continue in the DCT but to a lesser extent than in the PCT. Each collecting duct collects forming urine from several nephrons and responds to the posterior pituitary hormone ADH by inserting aquaporin water channels into the cell membrane to fine tune water recovery.

What are the names of the capillaries following the efferent arteriole?

Which structures make up the renal corpuscle?

The structures that make up the renal corpuscle are the glomerulus, Bowman’s capsule, and PCT.

What are the major structures comprising the filtration membrane?

angiotensin II
protein produced by the enzymatic action of ACE on inactive angiotensin I; actively causes vasoconstriction and stimulates aldosterone release by the adrenal cortex

angiotensinogen
inactive protein in the circulation produced by the liver; precursor of angiotensin I; must be modified by the enzymes renin and ACE to be activated

aquaporin
protein-forming water channels through the lipid bilayer of the cell; allows water to cross; activation in the collecting ducts is under the control of ADH

brush border
formed by microvilli on the surface of certain cuboidal cells; in the kidney it is found in the PCT; increases surface area for absorption in the kidney

fenestrations
small windows through a cell, allowing rapid filtration based on size; formed in such a way as to allow substances to cross through a cell without mixing with cell contents

filtration slits
formed by pedicels of podocytes; substances filter between the pedicels based on size

juxtaglomerular apparatus (JGA)
located at the juncture of the DCT and the afferent and efferent arterioles of the glomerulus; plays a role in the regulation of renal blood flow and GFR

juxtaglomerular cell
modified smooth muscle cells of the afferent arteriole; secretes renin in response to a drop in blood pressure

macula densa
cells found in the part of the DCT forming the JGA; sense Na+ concentration in the forming urine

mesangial
contractile cells found in the glomerulus; can contract or relax to regulate filtration rate

renin
enzyme produced by juxtaglomerular cells in response to decreased blood pressure or sympathetic nervous activity; catalyzes the conversion of angiotensinogen into angiotensin I