The Nervous System and Nervous Tissue

The Function of Nervous Tissue

Testing the Water
(1) The sensory neuron has endings in the skin that sense a stimulus such as water temperature. The strength of the signal that starts here is dependent on the strength of the stimulus. (2) The graded potential from the sensory endings, if strong enough, will initiate an action potential at the initial segment of the axon (which is immediately adjacent to the sensory endings in the skin). (3) The axon of the peripheral sensory neuron enters the spinal cord and contacts another neuron in the gray matter. The contact is a synapse where another graded potential is caused by the release of a chemical signal from the axon terminals. (4) An action potential is initiated at the initial segment of this neuron and travels up the sensory pathway to a region of the brain called the thalamus. Another synapse passes the information along to the next neuron. (5) The sensory pathway ends when the signal reaches the cerebral cortex. (6) After integration with neurons in other parts of the cerebral cortex, a motor command is sent from the precentral gyrus of the frontal cortex. (7) The upper motor neuron sends an action potential down to the spinal cord. The target of the upper motor neuron is the dendrites of the lower motor neuron in the gray matter of the spinal cord. (8) The axon of the lower motor neuron emerges from the spinal cord in a nerve and connects to a muscle through a neuromuscular junction to cause contraction of the target muscle. 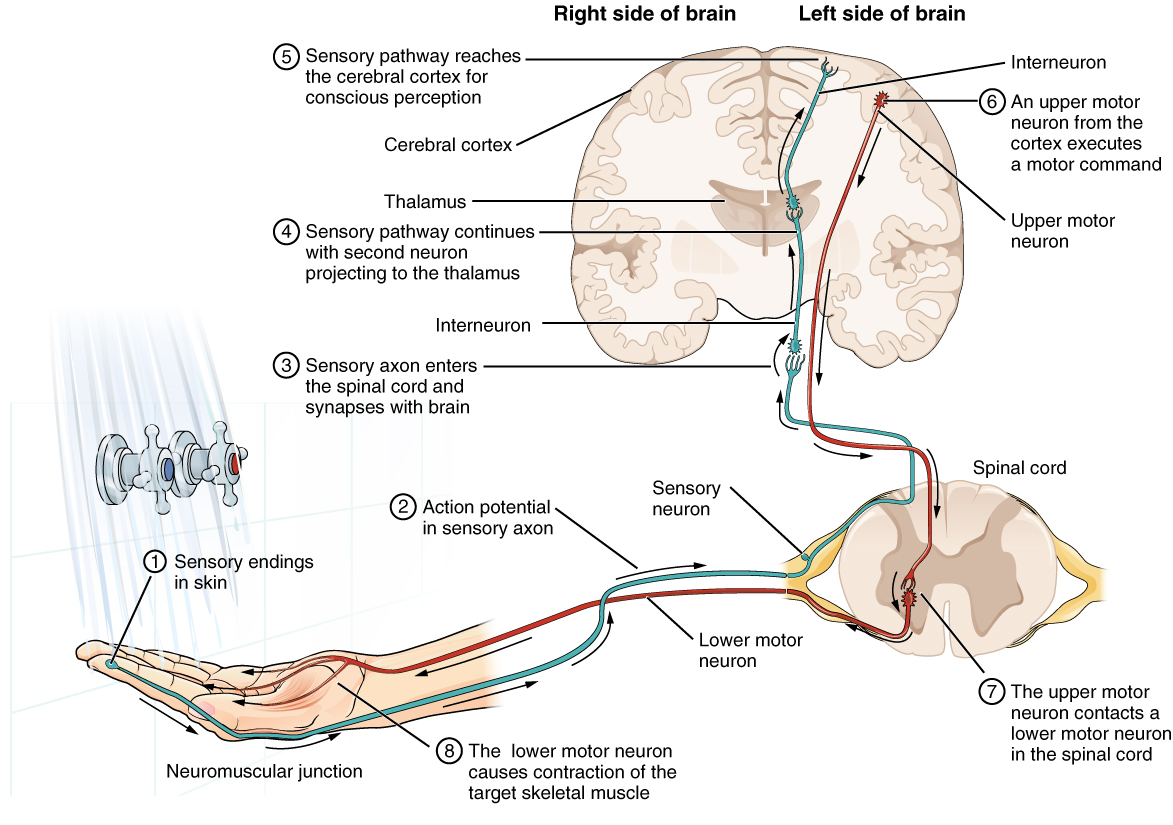 Imagine you are about to take a shower in the morning before going to school. You have turned on the faucet to start the water as you prepare to get in the shower. After a few minutes, you expect the water to be a temperature that will be comfortable to enter. So you put your hand out into the spray of water. What happens next depends on how your nervous system interacts with the stimulus of the water temperature and what you do in response to that stimulus.

Found in the skin of your fingers or toes is a type of sensory receptor that is sensitive to temperature, called a thermoreceptor. When you place your hand under the shower ((Figure)), the cell membrane of the thermoreceptors changes its electrical state (voltage). The amount of change is dependent on the strength of the stimulus (how hot the water is). This is called a graded potential. If the stimulus is strong, the voltage of the cell membrane will change enough to generate an electrical signal that will travel down the axon. You have learned about this type of signaling before, with respect to the interaction of nerves and muscles at the neuromuscular junction. The voltage at which such a signal is generated is called the threshold, and the resulting electrical signal is called an action potential. In this example, the action potential travels—a process known as propagation—along the axon from the axon hillock to the axon terminals and into the synaptic end bulbs. When this signal reaches the end bulbs, it causes the release of a signaling molecule called a neurotransmitter.

The Sensory Input
Receptors in the skin sense the temperature of the water. 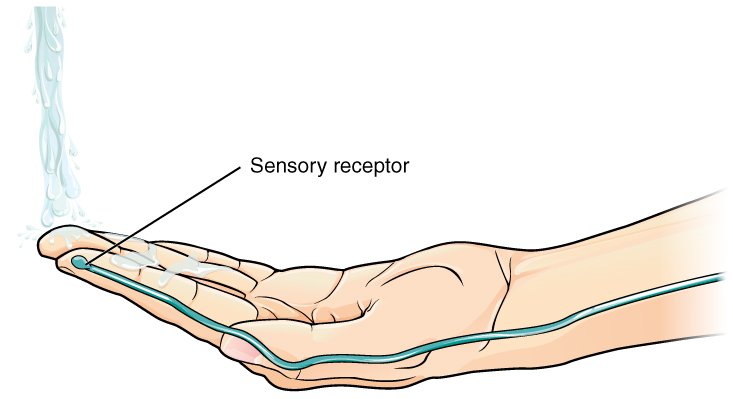 The neurotransmitter diffuses across the short distance of the synapse and binds to a receptor protein of the target neuron. When the molecular signal binds to the receptor, the cell membrane of the target neuron changes its electrical state and a new graded potential begins. If that graded potential is strong enough to reach threshold, the second neuron generates an action potential at its axon hillock. The target of this neuron is another neuron in the thalamus of the brain, the part of the CNS that acts as a relay for sensory information. At another synapse, neurotransmitter is released and binds to its receptor. The thalamus then sends the sensory information to the cerebral cortex, the outermost layer of gray matter in the brain, where conscious perception of that water temperature begins.

Within the cerebral cortex, information is processed among many neurons, integrating the stimulus of the water temperature with other sensory stimuli, with your emotional state (you just aren’t ready to wake up; the bed is calling to you), memories (perhaps of the lab notes you have to study before a quiz). Finally, a plan is developed about what to do, whether that is to turn the temperature up, turn the whole shower off and go back to bed, or step into the shower. To do any of these things, the cerebral cortex has to send a command out to your body to move muscles ((Figure)).

The Motor Response
On the basis of the sensory input and the integration in the CNS, a motor response is formulated and executed. 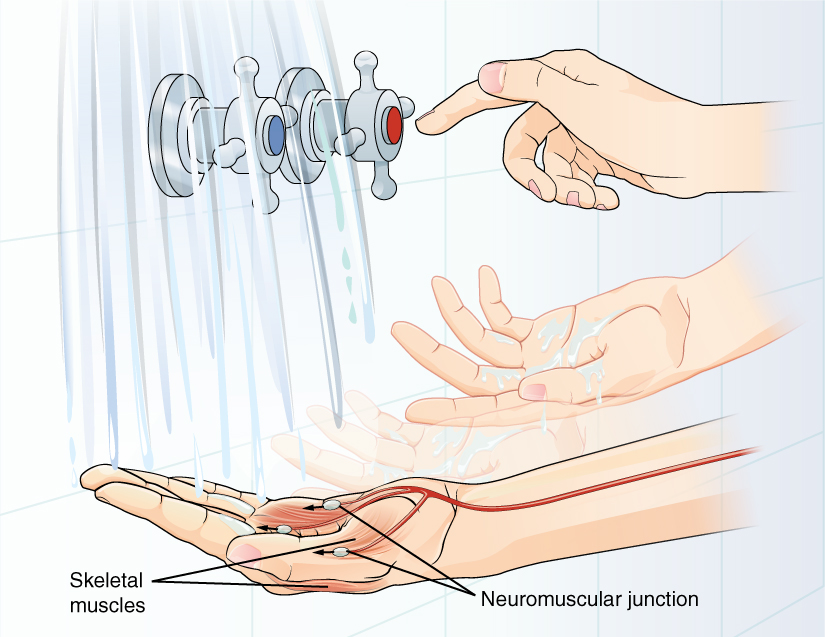 A region of the cortex is specialized for sending signals down to the spinal cord for movement. The upper motor neuron is in this region, called the precentral gyrus of the frontal cortex, which has an axon that extends all the way down the spinal cord. At the level of the spinal cord at which this axon makes a synapse, a graded potential occurs in the cell membrane of a lower motor neuron. This second motor neuron is responsible for causing muscle fibers to contract. In the manner described in the chapter on muscle tissue, an action potential travels along the motor neuron axon into the periphery. The axon terminates on muscle fibers at the neuromuscular junction. Acetylcholine is released at this specialized synapse, which causes the muscle action potential to begin, following a large potential known as an end plate potential. When the lower motor neuron excites the muscle fiber, it contracts. All of this occurs in a fraction of a second, but this story is the basis of how the nervous system functions.

Neurophysiologist Understanding how the nervous system works could be a driving force in your career. Studying neurophysiology is a very rewarding path to follow. It means that there is a lot of work to do, but the rewards are worth the effort.

The career path of a research scientist can be straightforward: college, graduate school, postdoctoral research, academic research position at a university. A Bachelor’s degree in science will get you started, and for neurophysiology that might be in biology, psychology, computer science, engineering, or neuroscience. But the real specialization comes in graduate school. There are many different programs out there to study the nervous system, not just neuroscience itself. Most graduate programs are doctoral, meaning that a Master’s degree is not part of the work. These are usually considered five-year programs, with the first two years dedicated to course work and finding a research mentor, and the last three years dedicated to finding a research topic and pursuing that with a near single-mindedness. The research will usually result in a few publications in scientific journals, which will make up the bulk of a doctoral dissertation. After graduating with a Ph.D., researchers will go on to find specialized work called a postdoctoral fellowship within established labs. In this position, a researcher starts to establish their own research career with the hopes of finding an academic position at a research university.

Other options are available if you are interested in how the nervous system works. Especially for neurophysiology, a medical degree might be more suitable so you can learn about the clinical applications of neurophysiology and possibly work with human subjects. An academic career is not a necessity. Biotechnology firms are eager to find motivated scientists ready to tackle the tough questions about how the nervous system works so that therapeutic chemicals can be tested on some of the most challenging disorders such as Alzheimer’s disease or Parkinson’s disease, or spinal cord injury.

Others with a medical degree and a specialization in neuroscience go on to work directly with patients, diagnosing and treating mental disorders. You can do this as a psychiatrist, a neuropsychologist, a neuroscience nurse, or a neurodiagnostic technician, among other possible career paths.

Sensation starts with the activation of a sensory ending, such as the thermoreceptor in the skin sensing the temperature of the water. The sensory endings in the skin initiate an electrical signal that travels along the sensory axon within a nerve into the spinal cord, where it synapses with a neuron in the gray matter of the spinal cord. The temperature information represented in that electrical signal is passed to the next neuron by a chemical signal that diffuses across the small gap of the synapse and initiates a new electrical signal in the target cell. That signal travels through the sensory pathway to the brain, passing through the thalamus, where conscious perception of the water temperature is made possible by the cerebral cortex. Following integration of that information with other cognitive processes and sensory information, the brain sends a command back down to the spinal cord to initiate a motor response by controlling a skeletal muscle. The motor pathway is composed of two cells, the upper motor neuron and the lower motor neuron. The upper motor neuron has its cell body in the cerebral cortex and synapses on a cell in the gray matter of the spinal cord. The lower motor neuron is that cell in the gray matter of the spinal cord and its axon extends into the periphery where it synapses with a skeletal muscle in a neuromuscular junction.

Which of these locations is where the greatest level of integration is taking place in the example of testing the temperature of the shower?

How long does all the signaling through the sensory pathway, within the central nervous system, and through the motor command pathway take?

What is the target of an upper motor neuron?

If a person has a motor disorder and cannot move their arm voluntarily, but their muscles have tone, which motor neuron—upper or lower—is probably affected? Explain why.

The upper motor neuron would be affected because it is carrying the command from the brain down.

action potential
change in voltage of a cell membrane in response to a stimulus that results in transmission of an electrical signal; unique to neurons and muscle fibers

graded potential
change in the membrane potential that varies in size, depending on the size of the stimulus that elicits it

precentral gyrus of the frontal cortex
region of the cerebral cortex responsible for generating motor commands, where the upper motor neuron cell body is located

threshold
membrane voltage at which an action potential is initiated