The other major activity in the lungs is the process of respiration, the process of gas exchange. The function of respiration is to provide oxygen for use by body cells during cellular respiration and to eliminate carbon dioxide, a waste product of cellular respiration, from the body. In order for the exchange of oxygen and carbon dioxide to occur, both gases must be transported between the external and internal respiration sites. Although carbon dioxide is more soluble than oxygen in blood, both gases require a specialized transport system for the majority of the gas molecules to be moved between the lungs and other tissues.

Oxygen Transport in the Blood

Even though oxygen is transported via the blood, you may recall that oxygen is not very soluble in liquids. A small amount of oxygen does dissolve in the blood and is transported in the bloodstream, but it is only about 1.5% of the total amount. The majority of oxygen molecules are carried from the lungs to the body’s tissues by a specialized transport system, which relies on the erythrocyte—the red blood cell. Erythrocytes contain a metalloprotein, hemoglobin, which serves to bind oxygen molecules to the erythrocyte ((Figure)). Heme is the portion of hemoglobin that contains iron, and it is heme that binds oxygen. One hemoglobin molecule contains iron-containing Heme molecules, and because of this, each hemoglobin molecule is capable of carrying up to four molecules of oxygen. As oxygen diffuses across the respiratory membrane from the alveolus to the capillary, it also diffuses into the red blood cell and is bound by hemoglobin. The following reversible chemical reaction describes the production of the final product, oxyhemoglobin (Hb–O2), which is formed when oxygen binds to hemoglobin. Oxyhemoglobin is a bright red-colored molecule that contributes to the bright red color of oxygenated blood.

In this formula, Hb represents reduced hemoglobin, that is, hemoglobin that does not have oxygen bound to it. There are multiple factors involved in how readily heme binds to and dissociates from oxygen, which will be discussed in the subsequent sections.

Erythrocyte and Hemoglobin
Hemoglobin consists of four subunits, each of which contains one molecule of iron. 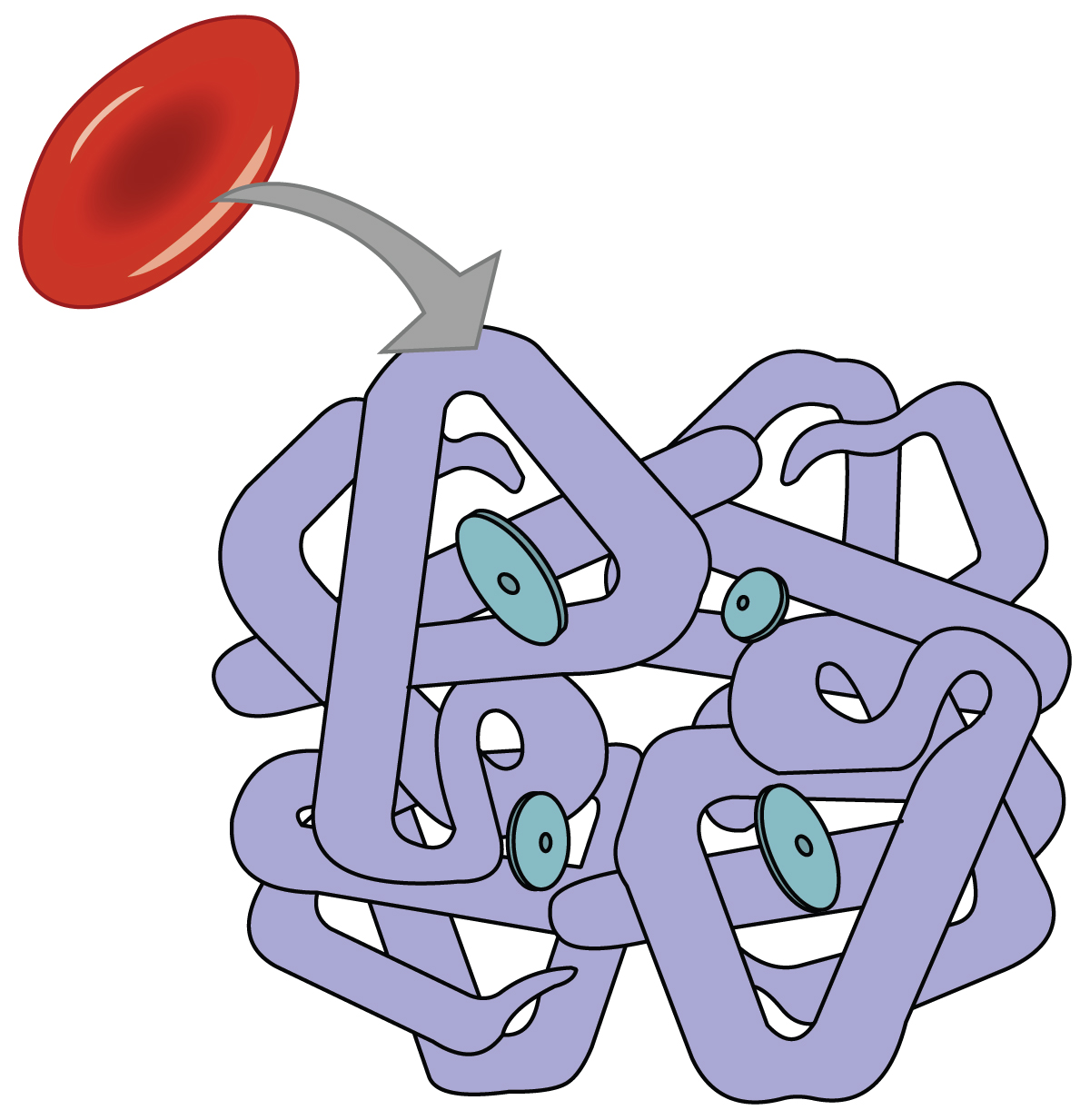 Hemoglobin is composed of subunits, a protein structure that is referred to as a quaternary structure. Each of the four subunits that make up hemoglobin is arranged in a ring-like fashion, with an iron atom covalently bound to the heme in the center of each subunit. Binding of the first oxygen molecule causes a conformational change in hemoglobin that allows the second molecule of oxygen to bind more readily. As each molecule of oxygen is bound, it further facilitates the binding of the next molecule, until all four heme sites are occupied by oxygen. The opposite occurs as well: After the first oxygen molecule dissociates and is “dropped off” at the tissues, the next oxygen molecule dissociates more readily. When all four heme sites are occupied, the hemoglobin is said to be saturated. When one to three heme sites are occupied, the hemoglobin is said to be partially saturated. Therefore, when considering the blood as a whole, the percent of the available heme units that are bound to oxygen at a given time is called hemoglobin saturation. Hemoglobin saturation of 100 percent means that every heme unit in all of the erythrocytes of the body is bound to oxygen. In a healthy individual with normal hemoglobin levels, hemoglobin saturation generally ranges from 95 percent to 99 percent. 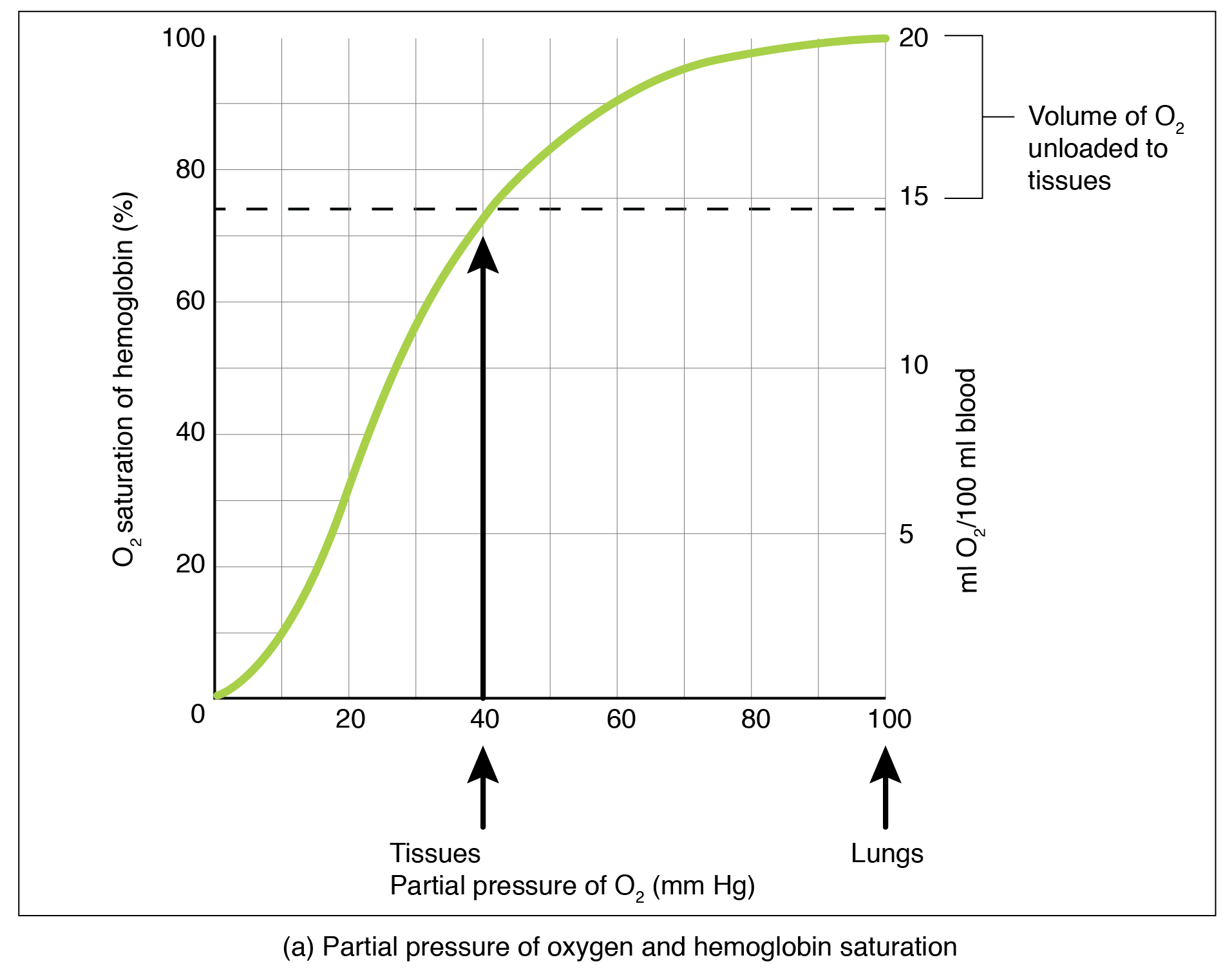 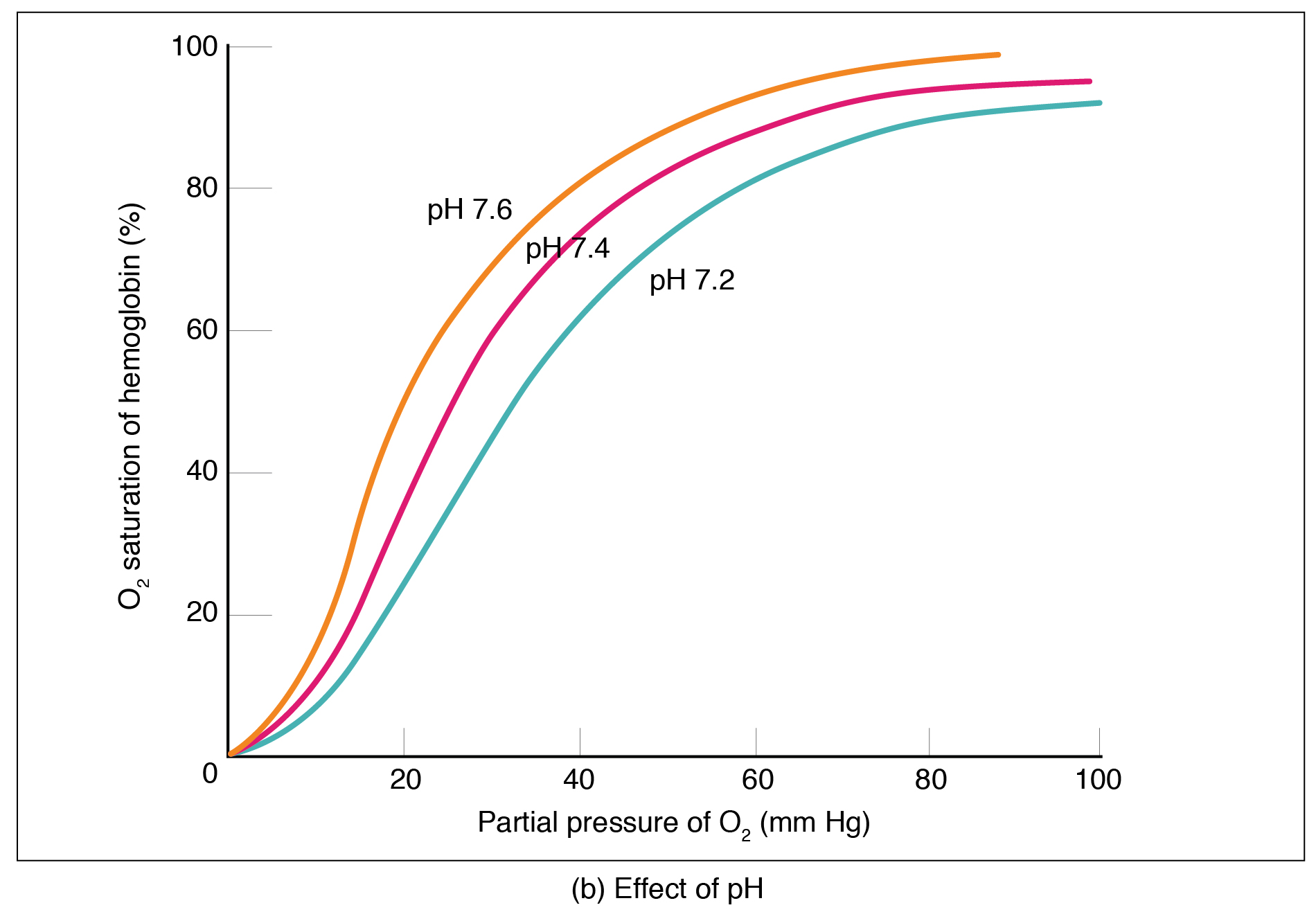 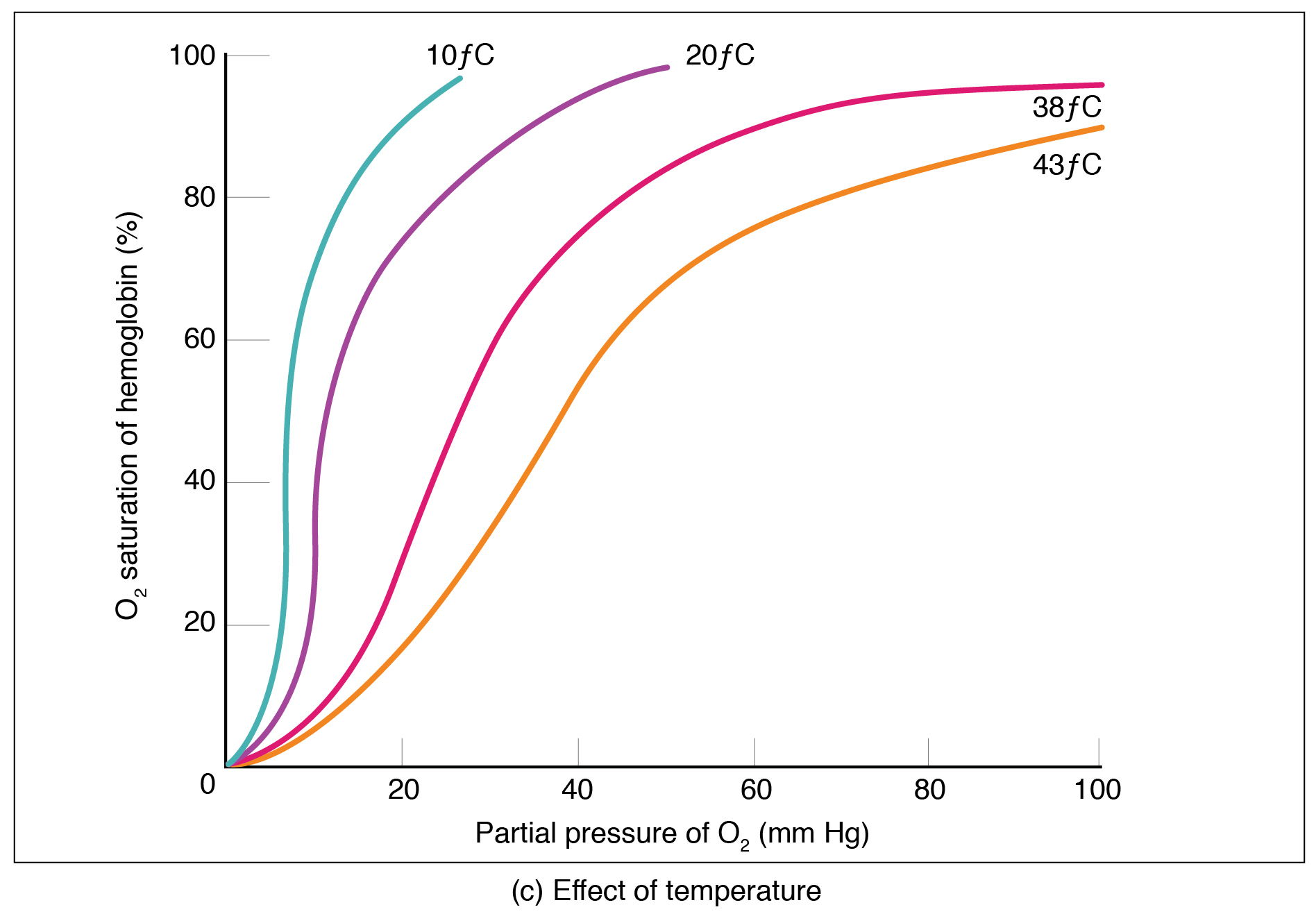 The mechanisms behind the oxygen–hemoglobin saturation/dissociation curve also serve as automatic control mechanisms that regulate how much oxygen is delivered to different tissues throughout the body. This is important because some tissues have a higher metabolic rate than others. Highly active tissues, such as muscle, rapidly use oxygen to produce ATP, lowering the partial pressure of oxygen in the tissue to about 20 mm Hg. The partial pressure of oxygen inside capillaries is about 100 mm Hg, so the difference between the two becomes quite high, about 80 mm Hg. As a result, a greater number of oxygen molecules dissociate from hemoglobin and enter the tissues. The reverse is true of tissues, such as adipose (body fat), which have lower metabolic rates. Because less oxygen is used by these cells, the partial pressure of oxygen within such tissues remains relatively high, resulting in fewer oxygen molecules dissociating from hemoglobin and entering the tissue interstitial fluid. Although venous blood is said to be deoxygenated, some oxygen is still bound to hemoglobin in its red blood cells. This provides an oxygen reserve that can be used when tissues suddenly demand more oxygen.

Factors other than partial pressure also affect the oxygen–hemoglobin saturation/dissociation curve. For example, a higher temperature promotes hemoglobin and oxygen to dissociate faster, whereas a lower temperature inhibits dissociation (see (Figure), middle). However, the human body tightly regulates temperature, so this factor may not affect gas exchange throughout the body. The exception to this is in highly active tissues, which may release a larger amount of energy than is given off as heat. As a result, oxygen readily dissociates from hemoglobin, which is a mechanism that helps to provide active tissues with more oxygen.

Certain hormones, such as androgens, epinephrine, thyroid hormones, and growth hormone, can affect the oxygen–hemoglobin saturation/disassociation curve by stimulating the production of a compound called 2,3-bisphosphoglycerate (BPG) by erythrocytes. BPG is a byproduct of glycolysis. Because erythrocytes do not contain mitochondria, glycolysis is the sole method by which these cells produce ATP. BPG promotes the disassociation of oxygen from hemoglobin. Therefore, the greater the concentration of BPG, the more readily oxygen dissociates from hemoglobin, despite its partial pressure.

The pH of the blood is another factor that influences the oxygen–hemoglobin saturation/dissociation curve (see (Figure)). The Bohr effect is a phenomenon that arises from the relationship between pH and oxygen’s affinity for hemoglobin: A lower, more acidic pH promotes oxygen dissociation from hemoglobin. In contrast, a higher, or more basic, pH inhibits oxygen dissociation from hemoglobin. The greater the amount of carbon dioxide in the blood, the more molecules that must be converted, which in turn generates hydrogen ions and thus lowers blood pH. Furthermore, blood pH may become more acidic when certain byproducts of cell metabolism, such as lactic acid, carbonic acid, and carbon dioxide, are released into the bloodstream.

Hemoglobin of the Fetus

The fetus has its own circulation with its own erythrocytes; however, it is dependent on the mother for oxygen. Blood is supplied to the fetus by way of the umbilical cord, which is connected to the placenta and separated from maternal blood by the chorion. The mechanism of gas exchange at the chorion is similar to gas exchange at the respiratory membrane. However, the partial pressure of oxygen is lower in the maternal blood in the placenta, at about 35 to 50 mm Hg, than it is in maternal arterial blood. The difference in partial pressures between maternal and fetal blood is not large, as the partial pressure of oxygen in fetal blood at the placenta is about 20 mm Hg. Therefore, there is not as much diffusion of oxygen into the fetal blood supply. The fetus’ hemoglobin overcomes this problem by having a greater affinity for oxygen than maternal hemoglobin ((Figure)). Both fetal and adult hemoglobin have four subunits, but two of the subunits of fetal hemoglobin have a different structure that causes fetal hemoglobin to have a greater affinity for oxygen than does adult hemoglobin.

Oxygen-Hemoglobin Dissociation Curves in Fetus and Adult
Fetal hemoglobin has a greater affinity for oxygen than does adult hemoglobin. 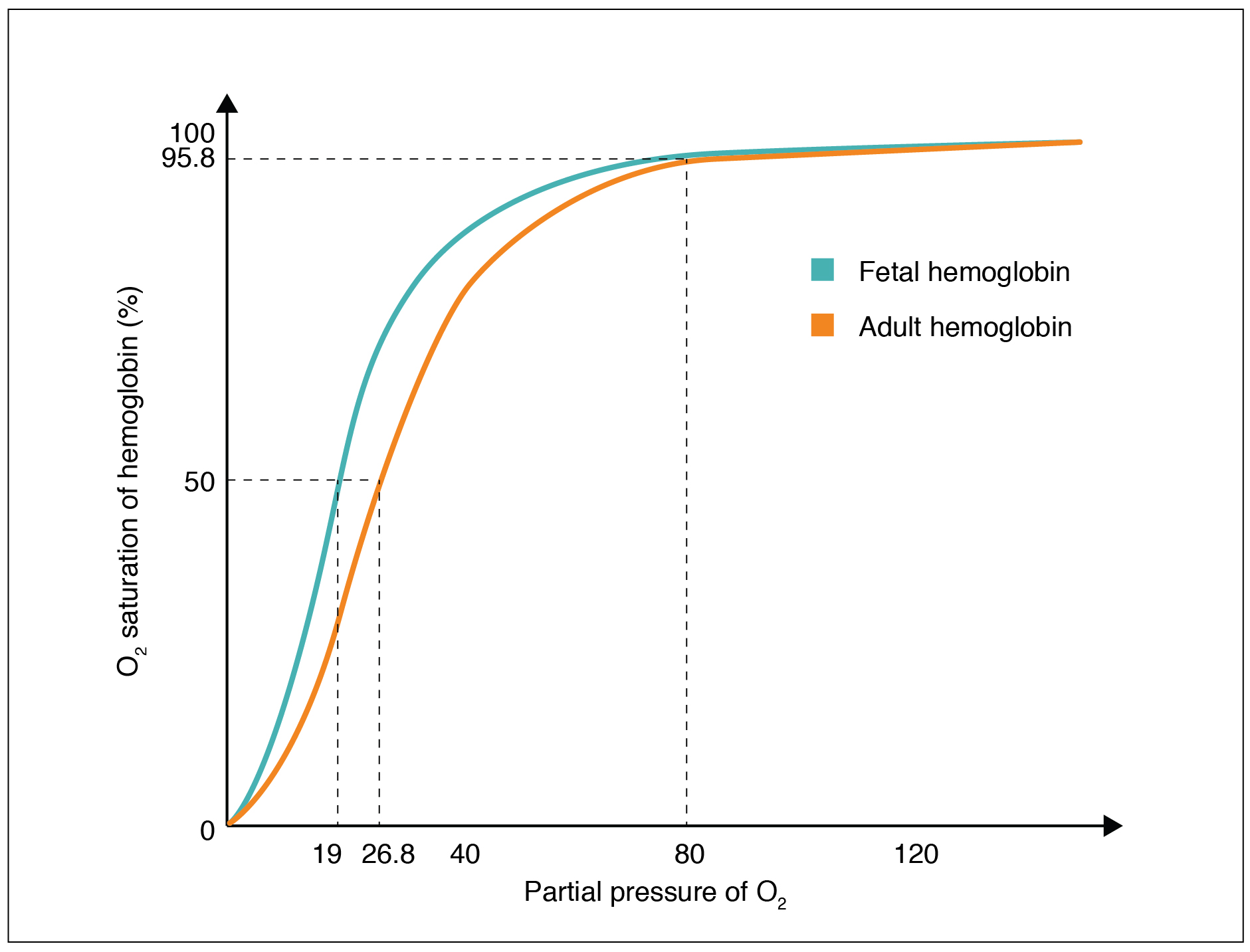 Carbon Dioxide Transport in the Blood

Carbon Dioxide Transport
Carbon dioxide is transported by three different methods: (a) in erythrocytes; (b) after forming carbonic acid (H2CO3 ), which is dissolved in plasma; (c) and in plasma.

A large fraction—about 70 percent—of the carbon dioxide molecules that diffuse into the blood is transported to the lungs as bicarbonate. Most bicarbonate is produced in erythrocytes after carbon dioxide diffuses into the capillaries, and subsequently into red blood cells. Carbonic anhydrase (CA) causes carbon dioxide and water to form carbonic acid (H2CO3), which dissociates into two ions: bicarbonate (HCO3–) and hydrogen (H+). The following formula depicts this reaction:

At the pulmonary capillaries, the chemical reaction that produced bicarbonate (shown above) is reversed, and carbon dioxide and water are the products. Much of the bicarbonate in the plasma re-enters the erythrocytes in exchange for chloride ions. Hydrogen ions and bicarbonate ions join to form carbonic acid, which is converted into carbon dioxide and water by carbonic anhydrase. Carbon dioxide diffuses out of the erythrocytes and into the plasma, where it can further diffuse across the respiratory membrane into the alveoli to be exhaled during pulmonary ventilation.

Watch this video to see the transport of oxygen from the lungs to the tissues. Why is oxygenated blood bright red, whereas deoxygenated blood tends to be more of a purple color?

Oxygen is primarily transported through the blood by erythrocytes. These cells contain a metalloprotein called hemoglobin, which is composed of four subunits with a ring-like structure. Each subunit contains one atom of iron bound to a molecule of heme. Heme binds oxygen so that each hemoglobin molecule can bind up to four oxygen molecules. When all of the heme units in the blood are bound to oxygen, hemoglobin is considered to be saturated. Hemoglobin is partially saturated when only some heme units are bound to oxygen. An oxygen–hemoglobin saturation/dissociation curve is a common way to depict the relationship of how easily oxygen binds to or dissociates from hemoglobin as a function of the partial pressure of oxygen. As the partial pressure of oxygen increases, the more readily hemoglobin binds to oxygen. At the same time, once one molecule of oxygen is bound by hemoglobin, additional oxygen molecules more readily bind to hemoglobin. Other factors such as temperature, pH, the partial pressure of carbon dioxide, and the concentration of 2,3-bisphosphoglycerate can enhance or inhibit the binding of hemoglobin and oxygen as well. Fetal hemoglobin has a different structure than adult hemoglobin, which results in fetal hemoglobin having a greater affinity for oxygen than adult hemoglobin.

Watch this video to see the transport of oxygen from the lungs to the tissues. Why is oxygenated blood bright red, whereas deoxygenated blood tends to be more of a purple color?

Oxyhemoglobin forms by a chemical reaction between which of the following?

Which of the following factors play a role in the oxygen–hemoglobin saturation/dissociation curve?

Which of the following occurs during the chloride shift?

A low partial pressure of oxygen promotes hemoglobin binding to carbon dioxide. This is an example of the ________.

Describe the relationship between the partial pressure of oxygen and the binding of oxygen to hemoglobin.

Describe three ways in which carbon dioxide can be transported.