Structure and Function of Plasma Membranes 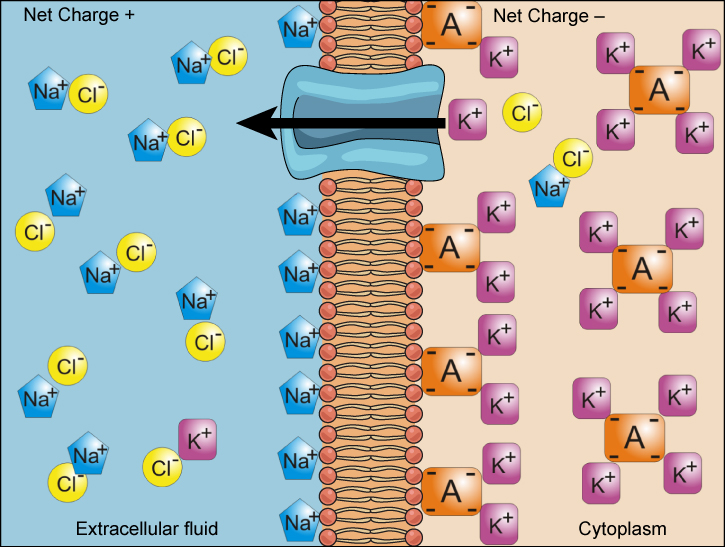 Moving Against a Gradient

To move substances against a concentration or electrochemical gradient, the cell must use energy. This energy comes from ATP generated through the cell’s metabolism. Active transport mechanisms, or pumps, work against electrochemical gradients. Small substances constantly pass through plasma membranes. Active transport maintains concentrations of ions and other substances that living cells require in the face of these passive movements. A cell may spend much of its metabolic energy supply maintaining these processes. (A red blood cell uses most of its metabolic energy to maintain the imbalance between exterior and interior sodium and potassium levels that the cell requires.) Because active transport mechanisms depend on a cell’s metabolism for energy, they are sensitive to many metabolic poisons that interfere with the ATP supply.

An important membrane adaption for active transport is the presence of specific carrier proteins or pumps to facilitate movement: there are three protein types or transporters ((Figure)). A uniporter carries one specific ion or molecule. A symporter carries two different ions or molecules, both in the same direction. An antiporter also carries two different ions or molecules, but in different directions. All of these transporters can also transport small, uncharged organic molecules like glucose. These three types of carrier proteins are also in facilitated diffusion, but they do not require ATP to work in that process. Some examples of pumps for active transport are Na+-K+ ATPase, which carries sodium and potassium ions, and H+-K+ ATPase, which carries hydrogen and potassium ions. Both of these are antiporter carrier proteins. Two other carrier proteins are Ca2+ ATPase and H+ ATPase, which carry only calcium and only hydrogen ions, respectively. Both are pumps.

One of the most important pumps in animal cells is the sodium-potassium pump (Na+-K+ ATPase), which maintains the electrochemical gradient (and the correct concentrations of Na+ and K+) in living cells. The sodium-potassium pump moves K+ into the cell while moving Na+ out at the same time, at a ratio of three Na+ for every two K+ ions moved in. The Na+-K+ ATPase exists in two forms, depending on its orientation to the cell’s interior or exterior and its affinity for either sodium or potassium ions. The process consists of the following six steps.

Several things have happened as a result of this process. At this point, there are more sodium ions outside the cell than inside and more potassium ions inside than out. For every three sodium ions that move out, two potassium ions move in. This results in the interior being slightly more negative relative to the exterior. This difference in charge is important in creating the conditions necessary for the secondary process. The sodium-potassium pump is, therefore, an electrogenic pump (a pump that creates a charge imbalance), creating an electrical imbalance across the membrane and contributing to the membrane potential.

Watch this video to see an active transport simulation in a sodium-potassium ATPase.

Secondary active transport brings sodium ions, and possibly other compounds, into the cell. As sodium ion concentrations build outside of the plasma membrane because of the primary active transport process, this creates an electrochemical gradient. If a channel protein exists and is open, the sodium ions will pull through the membrane. This movement transports other substances that can attach themselves to the transport protein through the membrane ((Figure)). Many amino acids, as well as glucose, enter a cell this way. This secondary process also stores high-energy hydrogen ions in the mitochondria of plant and animal cells in order to produce ATP. The potential energy that accumulates in the stored hydrogen ions translates into kinetic energy as the ions surge through the channel protein ATP synthase, and that energy then converts ADP into ATP. 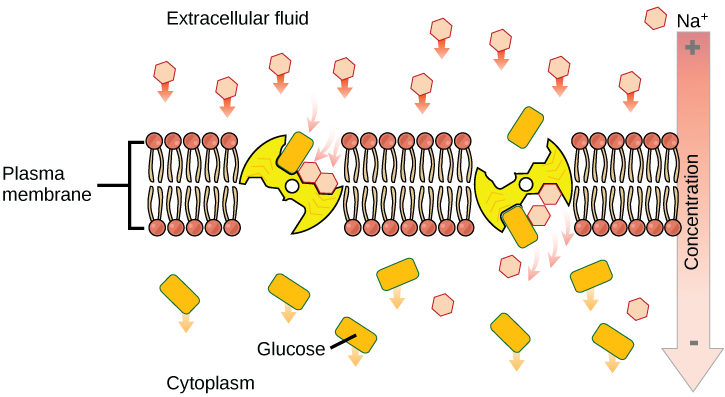 If the pH outside the cell decreases, would you expect the amount of amino acids transported into the cell to increase or decrease?

(Figure) Cells typically have a high concentration of potassium in the cytoplasm and are bathed in a high concentration of sodium. Injection of potassium dissipates this electrochemical gradient. In heart muscle, the sodium/potassium potential is responsible for transmitting the signal that causes the muscle to contract. When this potential is dissipated, the signal can’t be transmitted, and the heart stops beating. Potassium injections are also used to stop the heart from beating during surgery.

(Figure) If the pH outside the cell decreases, would you expect the amount of amino acids transported into the cell to increase or decrease?

(Figure) A decrease in pH means an increase in positively charged H+ ions, and an increase in the electrical gradient across the membrane. The transport of amino acids into the cell will increase.

Active transport must function continuously because __________.

How does the sodium-potassium pump make the interior of the cell negatively charged?

What is the combination of an electrical gradient and a concentration gradient called?

Where does the cell get energy for active transport processes?

The cell harvests energy from ATP produced by its own metabolism to power active transport processes, such as the activity of pumps.

How does the sodium-potassium pump contribute to the net negative charge of the interior of the cell?

The sodium-potassium pump forces out three (positive) Na+ ions for every two (positive) K+ ions it pumps in, thus the cell loses a positive charge at every cycle of the pump.

The sodium/calcium exchanger (NCX) transports sodium into and calcium out of cardiac muscle cells. Describe why this transporter is classified as secondary active transport.

symporter
transporter that carries two different ions or small molecules, both in the same direction

uniporter
transporter that carries one specific ion or molecule