Phylogenies and the History of Life

Scientists must collect accurate information that allows them to make evolutionary connections among organisms. Similar to detective work, scientists must use evidence to uncover the facts. In the case of phylogeny, evolutionary investigations focus on two types of evidence: morphologic (form and function) and genetic.

In general, organisms that share similar physical features and genomes are more closely related than those that do not. We refer to such features that overlap both morphologically (in form) and genetically as homologous structures. They stem from developmental similarities that are based on evolution. For example, the bones in bat and bird wings have homologous structures ((Figure)).

Notice it is not simply a single bone, but rather a grouping of several bones arranged in a similar way. The more complex the feature, the more likely any kind of overlap is due to a common evolutionary past. Imagine two people from different countries both inventing a car with all the same parts and in exactly the same arrangement without any previous or shared knowledge. That outcome would be highly improbable. However, if two people both invented a hammer, we can reasonably conclude that both could have the original idea without the help of the other. The same relationship between complexity and shared evolutionary history is true for homologous structures in organisms.

Some organisms may be very closely related, even though a minor genetic change caused a major morphological difference to make them look quite different. Similarly, unrelated organisms may be distantly related, but appear very much alike. This usually happens because both organisms were in common adaptations that evolved within similar environmental conditions. When similar characteristics occur because of environmental constraints and not due to a close evolutionary relationship, it is an analogy or homoplasy. For example, insects use wings to fly like bats and birds, but the wing structure and embryonic origin is completely different. These are analogous structures ((Figure)). 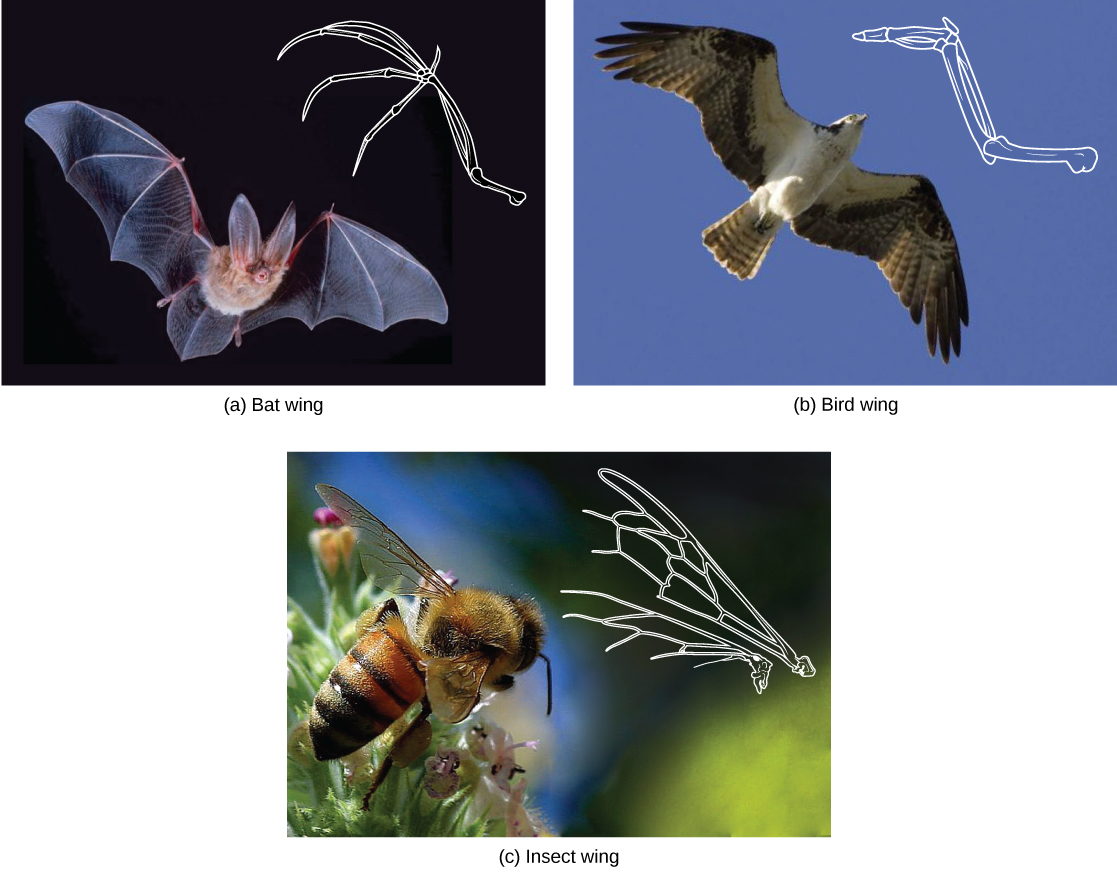 This website has several examples to show how appearances can be misleading in understanding organisms’ phylogenetic relationships.

The advancement of DNA technology has given rise to molecular systematics, which is use of molecular data in taxonomy and biological geography (biogeography). New computer programs not only confirm many earlier classified organisms, but also uncover previously made errors. As with physical characteristics, even the DNA sequence can be tricky to read in some cases. For some situations, two very closely related organisms can appear unrelated if a mutation occurred that caused a shift in the genetic code. Inserting or deleting a mutation would move each nucleotide base over one place, causing two similar codes to appear unrelated.

Sometimes two segments of DNA code in distantly related organisms randomly share a high percentage of bases in the same locations, causing these organisms to appear closely related when they are not. For both of these situations, computer technologies help identify the actual relationships, and, ultimately, the coupled use of both morphologic and molecular information is more effective in determining phylogeny.

Why Does Phylogeny Matter?Evolutionary biologists could list many reasons why understanding phylogeny is important to everyday life in human society. For botanists, phylogeny acts as a guide to discovering new plants that can be used to benefit people. Think of all the ways humans use plants—food, medicine, and clothing are a few examples. If a plant contains a compound that is effective in treating cancer, scientists might want to examine all of the compounds for other useful drugs.

A research team in China identified a DNA segment that they thought to be common to some medicinal plants in the family Fabaceae (the legume family). They worked to identify which species had this segment ((Figure)). After testing plant species in this family, the team found a DNA marker (a known location on a chromosome that enabled them to identify the species) present. Then, using the DNA to uncover phylogenetic relationships, the team could identify whether a newly discovered plant was in this family and assess its potential medicinal properties. 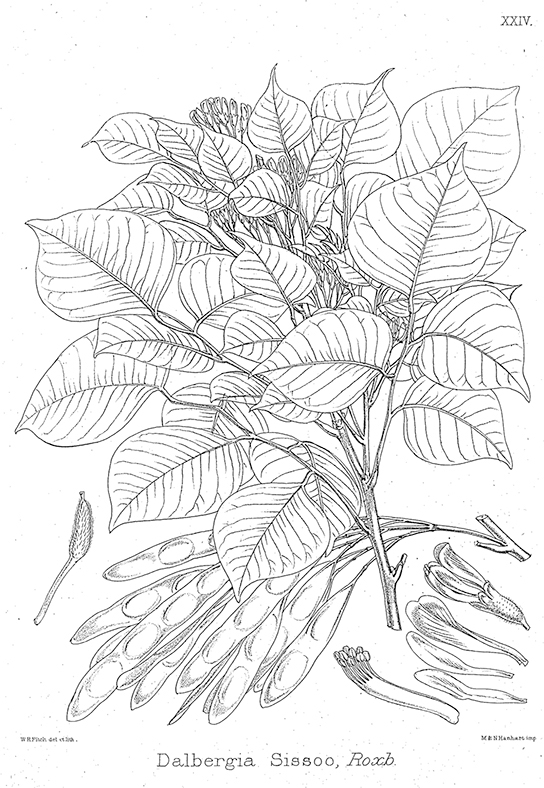 How do scientists construct phylogenetic trees? After they sort the homologous and analogous traits, scientists often organize the homologous traits using cladistics. This system sorts organisms into clades: groups of organisms that descended from a single ancestor. For example, in (Figure), all the organisms in the orange region evolved from a single ancestor that had amniotic eggs. Consequently, these organisms also have amniotic eggs and make a single clade, or a monophyletic group. Clades must include all descendants from a branch point. 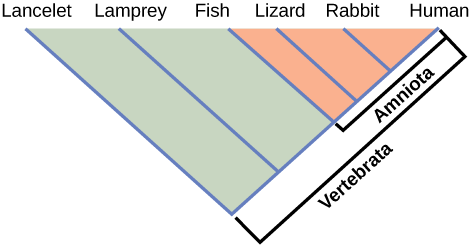 Which animals in this figure belong to a clade that includes animals with hair? Which evolved first, hair or the amniotic egg?

Clades can vary in size depending on which branch point one references. The important factor is that all organisms in the clade or monophyletic group stem from a single point on the tree. You can remember this because monophyletic breaks down into “mono,” meaning one, and “phyletic,” meaning evolutionary relationship. (Figure) shows various clade examples. Notice how each clade comes from a single point; whereas, the non-clade groups show branches that do not share a single point. 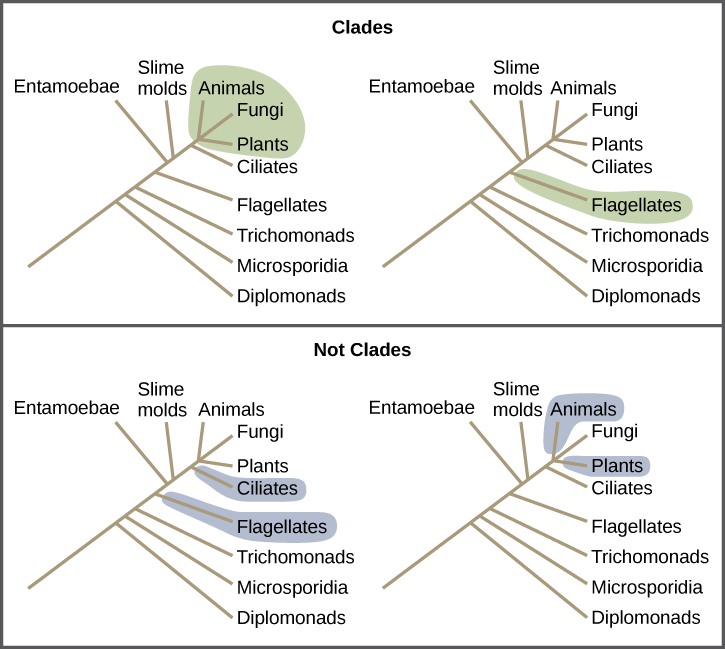 What is the largest clade in this diagram?

Organisms evolve from common ancestors and then diversify. Scientists use the phrase “descent with modification” because even though related organisms have many of the same characteristics and genetic codes, changes occur. This pattern repeats as one goes through the phylogenetic tree of life:

If a characteristic is found in the ancestor of a group, it is considered a shared ancestral character because all of the organisms in the taxon or clade have that trait. The vertebrate in (Figure) is a shared ancestral character. Now consider the amniotic egg characteristic in the same figure. Only some of the organisms in (Figure) have this trait, and to those that do, it is called a shared derived character because this trait derived at some point but does not include all of the ancestors in the tree.

The tricky aspect to shared ancestral and shared derived characters is that these terms are relative. We can consider the same trait one or the other depending on the particular diagram that we use. Returning to (Figure), note that the amniotic egg is a shared ancestral character for the Amniota clade, while having hair is a shared derived character for some organisms in this group. These terms help scientists distinguish between clades in building phylogenetic trees.

Imagine being the person responsible for organizing all department store items properly—an overwhelming task. Organizing the evolutionary relationships of all life on Earth proves much more difficult: scientists must span enormous blocks of time and work with information from long-extinct organisms. Trying to decipher the proper connections, especially given the presence of homologies and analogies, makes the task of building an accurate tree of life extraordinarily difficult. Add to that advancing DNA technology, which now provides large quantities of genetic sequences for researchers to use and analzye. Taxonomy is a subjective discipline: many organisms have more than one connection to each other, so each taxonomist will decide the order of connections.

To aid in the tremendous task of describing phylogenies accurately, scientists often use the concept of maximum parsimony, which means that events occurred in the simplest, most obvious way. For example, if a group of people entered a forest preserve to hike, based on the principle of maximum parsimony, one could predict that most would hike on established trails rather than forge new ones.

For scientists deciphering evolutionary pathways, the same idea is used: the pathway of evolution probably includes the fewest major events that coincide with the evidence at hand. Starting with all of the homologous traits in a group of organisms, scientists look for the most obvious and simple order of evolutionary events that led to the occurrence of those traits.

Head to this website to learn how researchers use maximum parsimony to create phylogenetic trees.

These tools and concepts are only a few strategies scientists use to tackle the task of revealing the evolutionary history of life on Earth. Recently, newer technologies have uncovered surprising discoveries with unexpected relationships, such as the fact that people seem to be more closely related to fungi than fungi are to plants. Sound unbelievable? As the information about DNA sequences grows, scientists will become closer to mapping the evolutionary history of all life on Earth.

To build phylogenetic trees, scientists must collect accurate information that allows them to make evolutionary connections between organisms. Using morphologic and molecular data, scientists work to identify homologous characteristics and genes. Similarities between organisms can stem either from shared evolutionary history (homologies) or from separate evolutionary paths (analogies). Scientists can use newer technologies to help distinguish homologies from analogies. After identifying homologous information, scientists use cladistics to organize these events as a means to determine an evolutionary timeline. They then apply the concept of maximum parsimony, which states that the order of events probably occurred in the most obvious and simple way with the least amount of steps. For evolutionary events, this would be the path with the least number of major divergences that correlate with the evidence.

(Figure) Which animals in this figure belong to a clade that includes animals with hair? Which evolved first, hair or the amniotic egg?

(Figure) What is the largest clade in this diagram?

Which statement about analogies is correct?

What do scientists use to apply cladistics?

What is true about organisms that are a part of the same clade?

Why do scientists apply the concept of maximum parsimony?

Dolphins and fish have similar body shapes. Is this feature more likely a homologous or analogous trait?

Dolphins are mammals and fish are not, which means that their evolutionary paths (phylogenies) are quite separate. Dolphins probably adapted to have a similar body plan after returning to an aquatic lifestyle, and, therefore, this trait is probably analogous.

Why is it so important for scientists to distinguish between homologous and analogous characteristics before building phylogenetic trees?

Phylogenetic trees are based on evolutionary connections. If an analogous similarity were used on a tree, this would be erroneous and, furthermore, would cause the subsequent branches to be inaccurate.

Maximum parsimony hypothesizes that events occurred in the simplest, most obvious way, and the pathway of evolution probably includes the fewest major events that coincide with the evidence at hand.

analogy
(also, homoplasy) characteristic that is similar between organisms by convergent evolution, not due to the same evolutionary path

maximum parsimony
applying the simplest, most obvious way with the least number of steps