Animal Nutrition and the Digestive System

The brain is the control center for the sensation of hunger and satiety. The functions of the digestive system are regulated through neural and hormonal responses.

In reaction to the smell, sight, or thought of food, like that shown in (Figure), the first response is that of salivation. The salivary glands secrete more saliva in response to stimulation by the autonomic nervous system triggered by food in preparation for digestion. Simultaneously, the stomach begins to produce hydrochloric acid to digest the food. Recall that the peristaltic movements of the esophagus and other organs of the digestive tract are under the control of the brain. The brain prepares these muscles for movement as well. When the stomach is full, the part of the brain that detects satiety signals fullness. There are three overlapping phases of gastric control—the cephalic phase, the gastric phase, and the intestinal phase—each requires many enzymes and is under neural control as well.

Seeing a plate of food triggers the secretion of saliva in the mouth and the production of HCL in the stomach. (credit: Kelly Bailey) 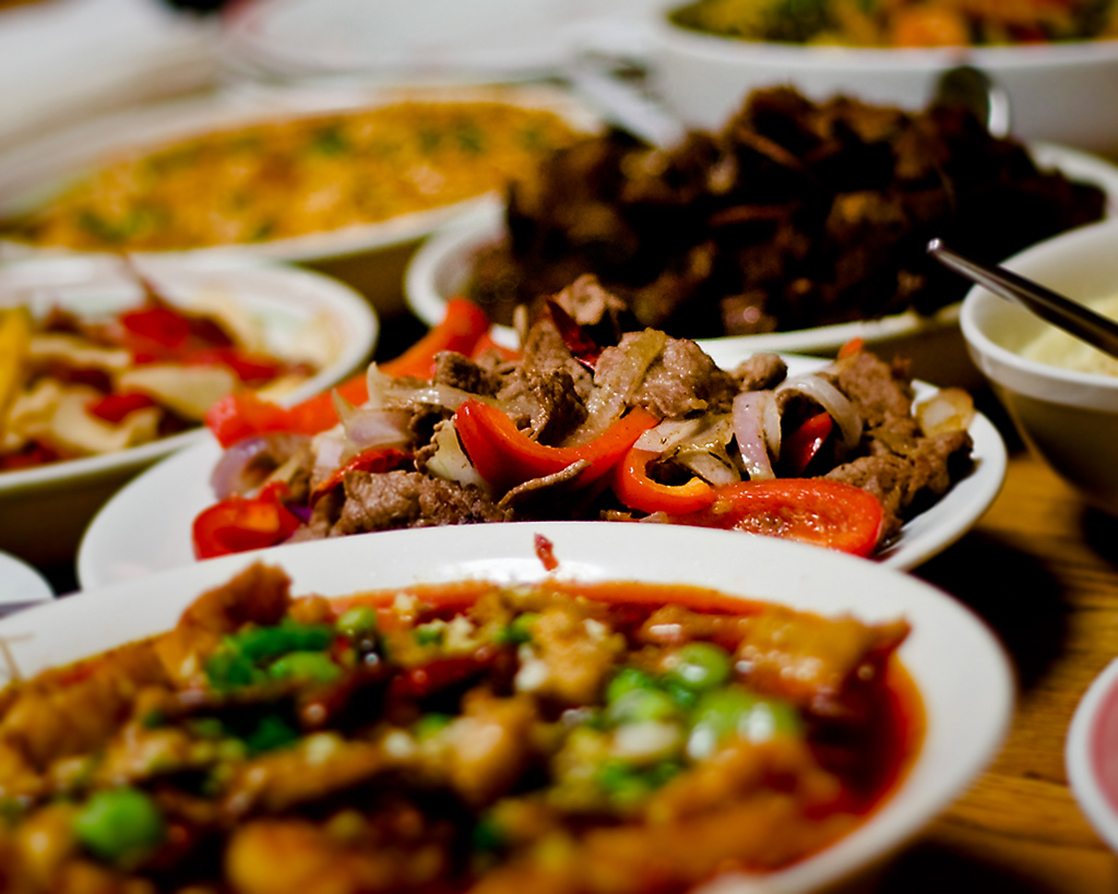 The response to food begins even before food enters the mouth. The first phase of ingestion, called the cephalic phase, is controlled by the neural response to the stimulus provided by food. All aspects—such as sight, sense, and smell—trigger the neural responses resulting in salivation and secretion of gastric juices. The gastric and salivary secretion in the cephalic phase can also take place due to the thought of food. Right now, if you think about a piece of chocolate or a crispy potato chip, the increase in salivation is a cephalic phase response to the thought. The central nervous system prepares the stomach to receive food.

The gastric phase begins once the food arrives in the stomach. It builds on the stimulation provided during the cephalic phase. Gastric acids and enzymes process the ingested materials. The gastric phase is stimulated by (1) distension of the stomach, (2) a decrease in the pH of the gastric contents, and (3) the presence of undigested material. This phase consists of local, hormonal, and neural responses. These responses stimulate secretions and powerful contractions.

The intestinal phase begins when chyme enters the small intestine triggering digestive secretions. This phase controls the rate of gastric emptying. In addition to gastrin emptying, when chyme enters the small intestine, it triggers other hormonal and neural events that coordinate the activities of the intestinal tract, pancreas, liver, and gallbladder.

The endocrine system controls the response of the various glands in the body and the release of hormones at the appropriate times.

One of the important factors under hormonal control is the stomach acid environment. During the gastric phase, the hormone gastrin is secreted by G cells in the stomach in response to the presence of proteins. Gastrin stimulates the release of stomach acid, or hydrochloric acid (HCl) which aids in the digestion of the proteins. However, when the stomach is emptied, the acidic environment need not be maintained and a hormone called somatostatin stops the release of hydrochloric acid. This is controlled by a negative feedback mechanism.

In the duodenum, digestive secretions from the liver, pancreas, and gallbladder play an important role in digesting chyme during the intestinal phase. In order to neutralize the acidic chyme, a hormone called secretin stimulates the pancreas to produce alkaline bicarbonate solution and deliver it to the duodenum. Secretin acts in tandem with another hormone called cholecystokinin (CCK). Not only does CCK stimulate the pancreas to produce the requisite pancreatic juices, it also stimulates the gallbladder to release bile into the duodenum.

Another level of hormonal control occurs in response to the composition of food. Foods high in lipids take a long time to digest. A hormone called gastric inhibitory peptide is secreted by the small intestine to slow down the peristaltic movements of the intestine to allow fatty foods more time to be digested and absorbed.

Understanding the hormonal control of the digestive system is an important area of ongoing research. Scientists are exploring the role of each hormone in the digestive process and developing ways to target these hormones. Advances could lead to knowledge that may help to battle the obesity epidemic.

Which hormone controls the release of bile from the gallbladder

Which hormone stops acid secretion in the stomach?

In the famous conditioning experiment, Pavlov demonstrated that his dogs started drooling in response to a bell sounding. What part of the digestive process did he stimulate?

Hormones control the different digestive enzymes that are secreted in the stomach and the intestine during the process of digestion and absorption. For example, the hormone gastrin stimulates stomach acid secretion in response to food intake. The hormone somatostatin stops the release of stomach acid.

Describe one or more scenarios where loss of hormonal regulation of digestion can lead to diseases.

There are many cases where loss of hormonal regulation can lead to illnesses. For example, the bilirubin produced by the breakdown of red blood cells is converted to bile by the liver. When there is malfunction of this process, there is excess bilirubin in the blood and bile levels are low. As a result, the body struggles with dealing with fatty food. This is why a patient suffering from jaundice is asked to eat a diet with almost zero fat.

A scientist is studying a model that has a mutation in the receptor for somatostatin that prevents hormone binding. How would this mutation affect the structure and function of the digestive system?

cephalic phase
first phase of digestion, controlled by the neural response to the stimulus provided by food

gastric inhibitory peptide
hormone secreted by the small intestine in the presence of fatty acids and sugars; it also inhibits acid production and peristalsis in order to slow down the rate at which food enters the small intestine

gastrin
hormone which stimulates hydrochloric acid secretion in the stomach