Until recently, all photosynthetic eukaryotes were classified as members of the kingdom Plantae. The brown and golden algae, however, are now reassigned to the protist supergroup Chromalveolata. This is because apart from their ability to capture light energy and fix CO2, they lack many structural and biochemical traits that are characteristic of plants. The plants are now classified, along with the red and green algae, in the protist supergroup Archaeplastida. Green algae contain the same carotenoids and chlorophyll a and b as land plants, whereas other algae have different accessory pigments and types of chlorophyll molecules in addition to chlorophyll a. Both green algae and land plants also store carbohydrates as starch. Their cells contain chloroplasts that display a dizzying variety of shapes, and their cell walls contain cellulose, as do land plants. Which of the green algae to include among the plants has not been phylogenetically resolved.

Green algae fall into two major groups, the chlorophytes and the charophytes. The chlorophytes include the genera Chlorella, Chlamydomonas, the “sea lettuce” Ulva, and the colonial alga Volvox. The charophytes include desmids, as well as the genera Spirogyra, Coleochaete, and Chara. There are familiar green algae in both groups. Some green algae are single cells, such as Chlamydomonas and desmids, which adds to the ambiguity of green algae classification, because plants are multicellular. Other green algae, like Volvox, form colonies, and some, like Ulva are multicellular ((Figure)). Spirogyra is a long filament of colonial cells. Most members of this genus live in fresh water, brackish water, seawater, or even in snow patches. A few green algae can survive on soil, provided it is covered by a thin film of moisture within which they can live. Periodic dry spells provide a selective advantage to algae that can survive water stress. 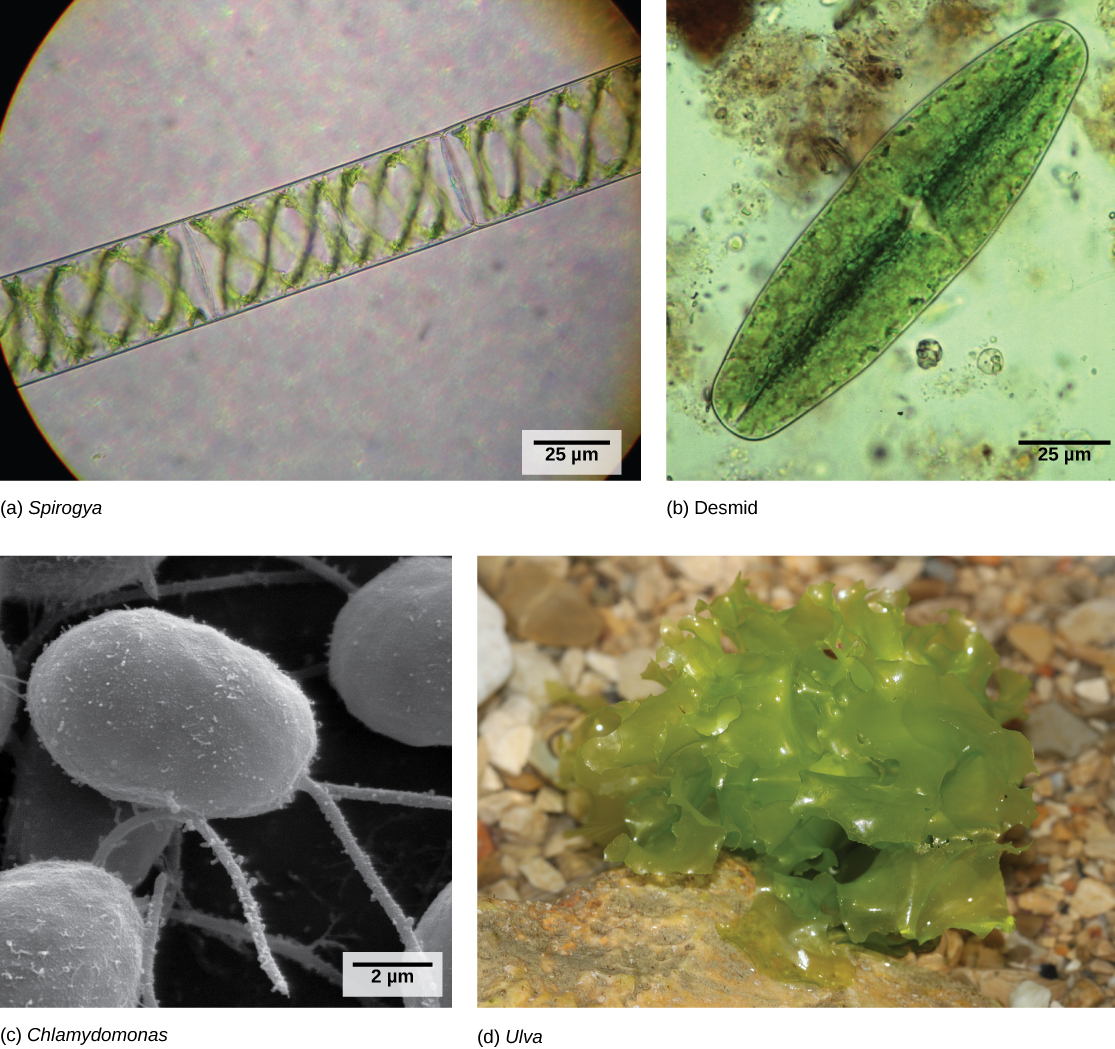 The charophytes include several different algal orders that have each been suggested to be the closest relatives of the land plants: the Charales, the Zygnematales, and the Coleochaetales. The Charales can be traced back 420 million years. They live in a range of freshwater habitats and vary in size from a few millimeters to a meter in length. The representative genus is Chara ((Figure)), often called muskgrass or skunkweed because of its unpleasant smell. Large cells form the thallus: the main stem of the alga. Branches arising from the nodes are made of smaller cells. Male and female reproductive structures are found on the nodes, and the sperm have flagella. Although Chara looks superficially like some land plants, a major difference is that the stem has no supportive tissue. However, the Charales exhibit a number of traits that are significant for adaptation to land life. They produce the compounds lignin and sporopollenin, and form plasmodesmata that connect the cytoplasm of adjacent cells. Although the life cycle of the Charales is haplontic (the main form is haploid, and diploid zygotes are formed but have a brief existence), the egg, and later, the zygote, form in a protected chamber on the haploid parent plant. 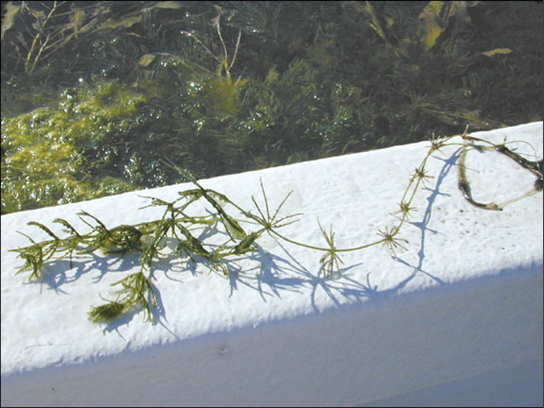 The Coleochaetes are branched or disclike multicellular forms. They can produce both sexually and asexually, but the life cycle is basically haplontic. Recent extensive DNA sequence analysis of charophytes indicates that the Zygnematales are more closely related to the embryophytes than the Charales or the Coleochaetales. The Zygnematales include the familiar genus Spirogyra, as well as the desmids. As techniques in DNA analysis improve and new information on comparative genomics arises, the phylogenetic connections between the charophytes and the land plants will continued to be examined to produce a satisfactory solution to the mystery of the origin of land plants.

Charophytes share more traits with land plants than do other algae, according to structural features and DNA analysis. Within the charophytes, the Charales, the Coleochaetales, and the Zygnematales have been each considered as sharing the closest common ancestry with the land plants. Charophytes form sporopollenin and precursors of lignin, phragmoplasts, and have flagellated sperm. They do not exhibit alternation of generations.

What characteristic of Charales would enable them to survive a dry spell?

Which one of these characteristics is present in land plants and not in Charales?

A scientist sequences the genome of Chara, red algae, and a tomato plant. What result would support the conclusion that Charophytes should be included in the Plantae kingdom?

Which of the following features does not support the inclusion of Charophytes in the Plantae kingdom?

To an alga, what is the main advantage of producing drought-resistant structures?

It allows for survival through periodic droughts and colonization of environments where the supply of water fluctuates.