By the end of this chapter, you will be able to do the following:

Testosterone, the hormone responsible for the secondary sexual characteristics that develop in the male during adolescence, stimulates spermatogenesis. These secondary sex characteristics include a deepening of the voice, the growth of facial, axillary, and pubic hair, and the beginnings of the sex drive.

The control of reproduction in females is more complex. As with the male, the anterior pituitary hormones cause the release of the hormones FSH and LH. In addition, estrogens and progesterone are released from the developing follicles. Estrogen is the reproductive hormone in females that assists in endometrial regrowth, ovulation, and calcium absorption; it is also responsible for the secondary sexual characteristics of females. These include breast development, flaring of the hips, and a shorter period necessary for bone maturation. Progesterone assists in endometrial regrowth and inhibition of FSH and LH release.

The Ovarian Cycle and the Menstrual Cycle

The first half of the ovarian cycle is the follicular phase shown in (Figure). Slowly rising levels of FSH and LH cause the growth of follicles on the surface of the ovary. This process prepares the egg for ovulation. As the follicles grow, they begin releasing estrogens and a low level of progesterone. Progesterone maintains the endometrium to help ensure pregnancy. The trip through the fallopian tube takes about seven days. At this stage of development, called the morula, there are 30-60 cells. If pregnancy implantation does not occur, the lining is sloughed off. After about five days, estrogen levels rise and the menstrual cycle enters the proliferative phase. The endometrium begins to regrow, replacing the blood vessels and glands that deteriorated during the end of the last cycle.

Visual Connection
The ovarian and menstrual cycles of female reproduction are regulated by hormones produced by the hypothalamus, pituitary, and ovaries. 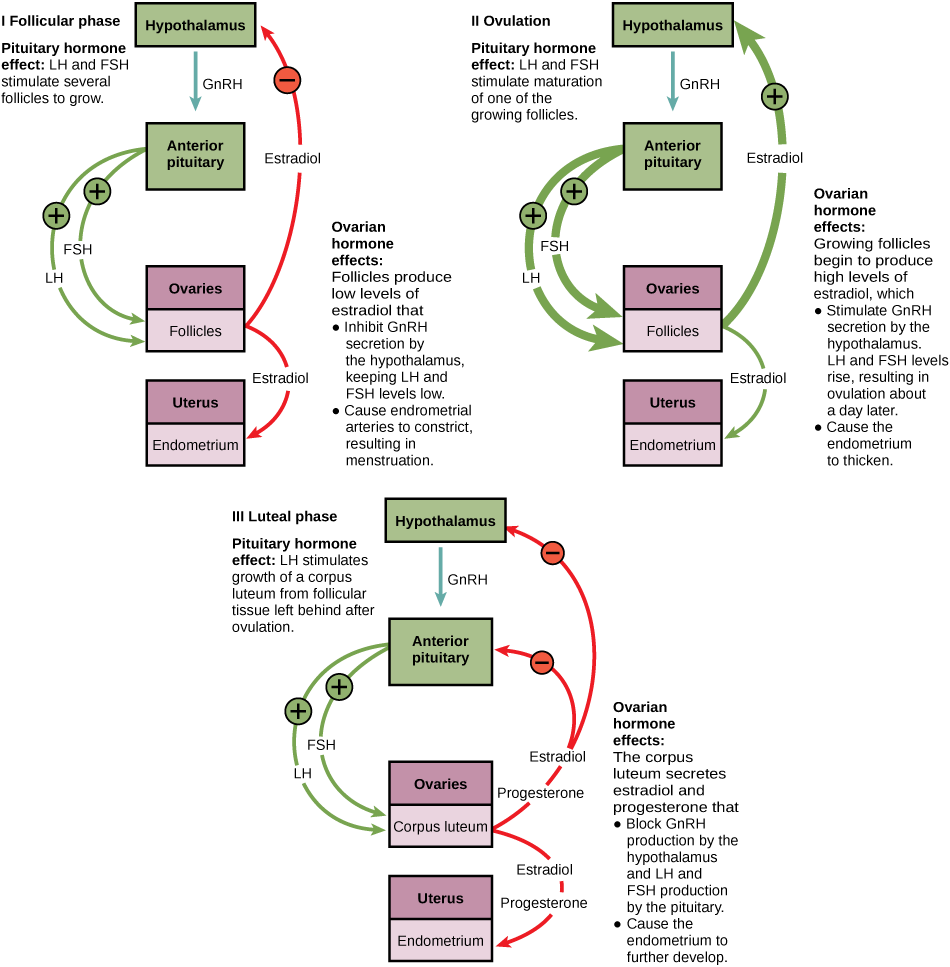 Which of the following statements about hormone regulation of the female reproductive cycle is false?

Just prior to the middle of the cycle (approximately day 14), the high level of estrogen causes FSH and especially LH to rise rapidly, then fall. The spike in LH causes ovulation: the most mature follicle, like that shown in (Figure), ruptures and releases its egg. The follicles that did not rupture degenerate and their eggs are lost. The level of estrogen decreases when the extra follicles degenerate.

This mature egg follicle may rupture and release an egg. (credit: scale-bar data from Matt Russell) 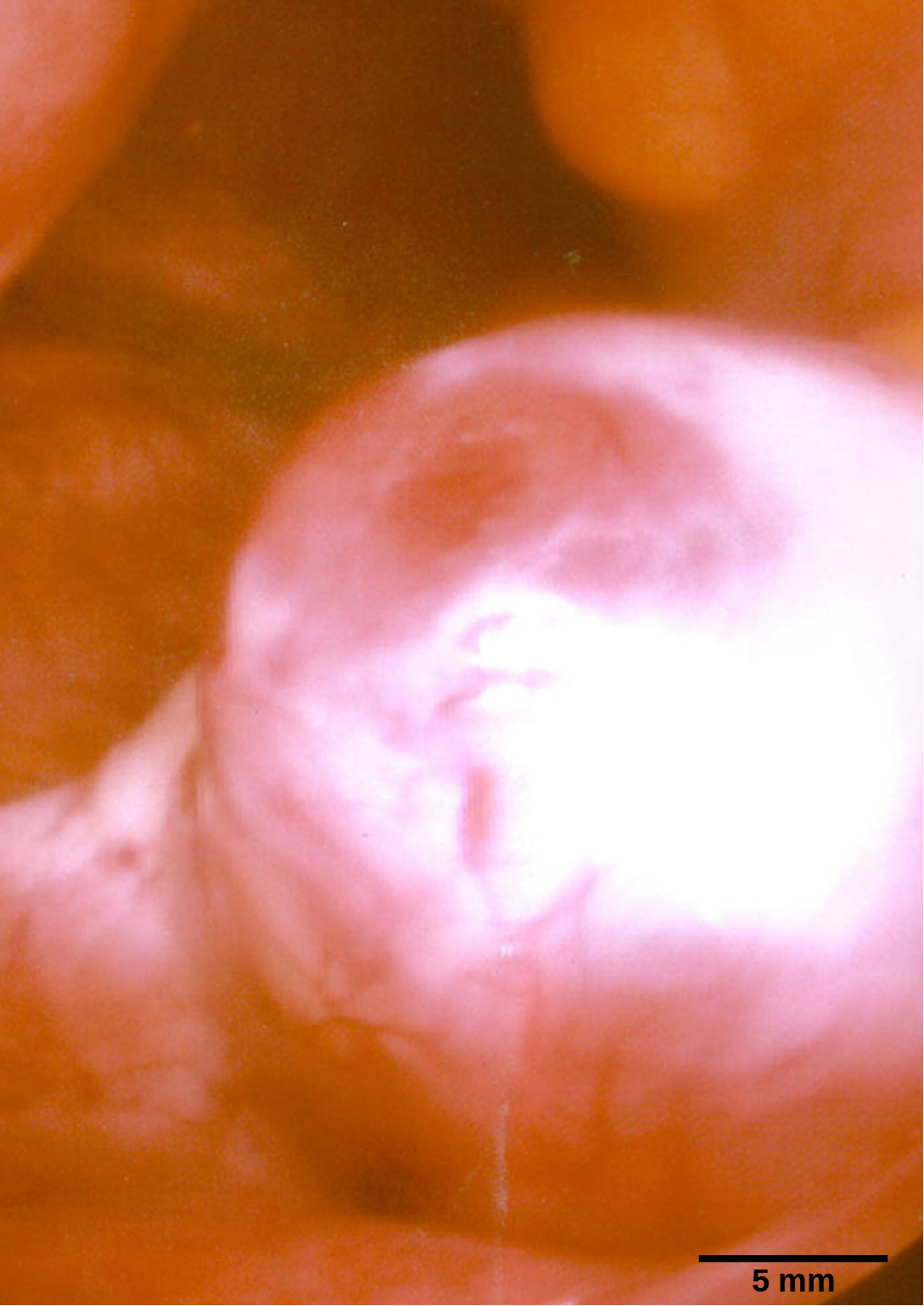 Following ovulation, the ovarian cycle enters its luteal phase, illustrated in (Figure) and the menstrual cycle enters its secretory phase, both of which run from about day 15 to 28. The luteal and secretory phases refer to changes in the ruptured follicle. The cells in the follicle undergo physical changes and produce a structure called a corpus luteum. The corpus luteum produces estrogen and progesterone. The progesterone facilitates the regrowth of the uterine lining and inhibits the release of further FSH and LH. The uterus is being prepared to accept a fertilized egg, should it occur during this cycle. The inhibition of FSH and LH prevents any further eggs and follicles from developing, while the progesterone is elevated. The level of estrogen produced by the corpus luteum increases to a steady level for the next few days.

If no fertilized egg is implanted into the uterus, the corpus luteum degenerates and the levels of estrogen and progesterone decrease. The endometrium begins to degenerate as the progesterone levels drop, initiating the next menstrual cycle. The decrease in progesterone also allows the hypothalamus to send GnRH to the anterior pituitary, releasing FSH and LH and starting the cycles again. (Figure) visually compares the ovarian and uterine cycles as well as the commensurate hormone levels.

Visual Connection
Rising and falling hormone levels result in progression of the ovarian and menstrual cycles. (credit: modification of work by Mikael Häggström) 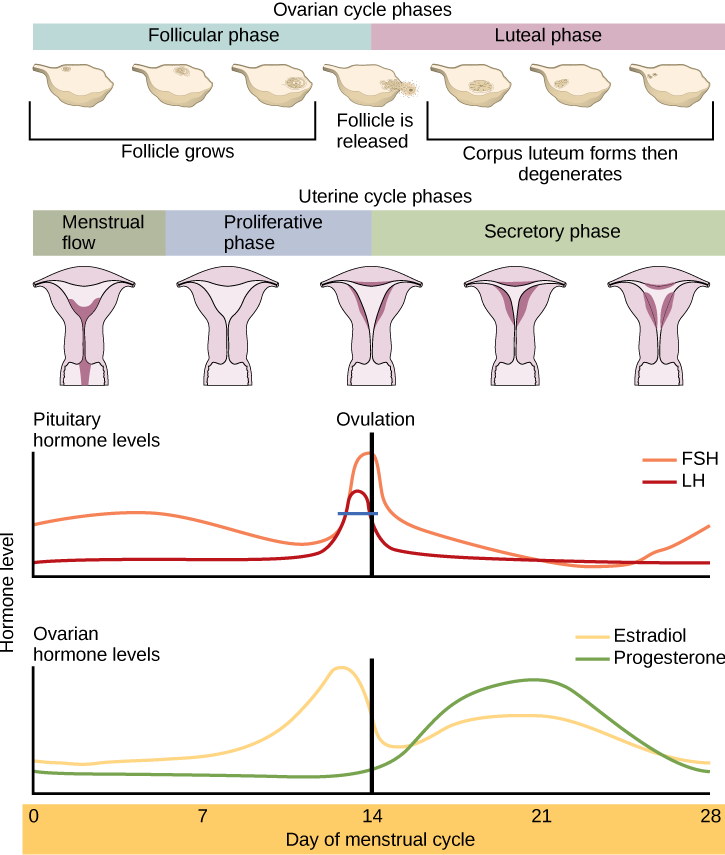 Which of the following statements about the menstrual cycle is false?

As women approach their mid-40s to mid-50s, their ovaries begin to lose their sensitivity to FSH and LH. Menstrual periods become less frequent and finally cease; this is menopause. There are still eggs and potential follicles on the ovaries, but without the stimulation of FSH and LH, they will not produce a viable egg to be released. The outcome of this is the inability to have children.

The side effects of menopause include hot flashes, heavy sweating (especially at night), headaches, some hair loss, muscle pain, vaginal dryness, insomnia, depression, weight gain, and mood swings. Estrogen is involved in calcium metabolism and, without it, blood levels of calcium decrease. To replenish the blood, calcium is lost from bone which may decrease the bone density and lead to osteoporosis. Supplementation of estrogen in the form of hormone replacement therapy (HRT) can prevent bone loss, but the therapy can have negative side effects. While HRT is thought to give some protection from colon cancer, osteoporosis, heart disease, macular degeneration, and possibly depression, its negative side effects include increased risk of: stroke or heart attack, blood clots, breast cancer, ovarian cancer, endometrial cancer, gall bladder disease, and possibly dementia.

Reproductive Endocrinologist
A reproductive endocrinologist is a physician who treats a variety of hormonal disorders related to reproduction and infertility in both men and women. The disorders include menstrual problems, infertility, pregnancy loss, sexual dysfunction, and menopause. Doctors may use fertility drugs, surgery, or assisted reproductive techniques (ART) in their therapy. ART involves the use of procedures to manipulate the egg or sperm to facilitate reproduction, such as in vitro fertilization.

The male and female reproductive cycles are controlled by hormones released from the hypothalamus and anterior pituitary as well as hormones from reproductive tissues and organs. The hypothalamus monitors the need for the FSH and LH hormones made and released from the anterior pituitary. FSH and LH affect reproductive structures to cause the formation of sperm and the preparation of eggs for release and possible fertilization. In the male, FSH and LH stimulate Sertoli cells and interstitial cells of Leydig in the testes to facilitate sperm production. The Leydig cells produce testosterone, which also is responsible for the secondary sexual characteristics of males. In females, FSH and LH cause estrogen and progesterone to be produced. They regulate the female reproductive system which is divided into the ovarian cycle and the menstrual cycle. Menopause occurs when the ovaries lose their sensitivity to FSH and LH and the female reproductive cycles slow to a stop.

(Figure) Which of the following statements about hormone regulation of the female reproductive cycle is false?

(Figure) Which of the following statements about the menstrual cycle is false?

Which hormone causes FSH and LH to be released?

Which hormone causes the regrowth of the endometrial lining of the uterus?

If male reproductive pathways are not cyclical, how are they controlled?

Negative feedback in the male system is supplied through two hormones: inhibin and testosterone. Inhibin is produced by Sertoli cells when the sperm count exceeds set limits. The hormone inhibits GnRH and FSH, decreasing the activity of the Sertoli cells. Increased levels of testosterone affect the release of both GnRH and LH, decreasing the activity of the Leydig cells, resulting in decreased testosterone and sperm production.

Describe the events in the ovarian cycle leading up to ovulation.

Low levels of progesterone allow the hypothalamus to send GnRH to the anterior pituitary and cause the release of FSH and LH. FSH stimulates follicles on the ovary to grow and prepare the eggs for ovulation. As the follicles increase in size, they begin to release estrogen and a low level of progesterone into the blood. The level of estrogen rises to a peak, causing a spike in the concentration of LH. This causes the most mature follicle to rupture and ovulation occurs.

inhibin
hormone made by Sertoli cells; provides negative feedback to hypothalamus in control of FSH and GnRH release

luteinizing hormone (LH)
reproductive hormone in both men and women, causes testosterone production in men and ovulation and lactation in women

menstrual cycle
cycle of the degradation and regrowth of the endometrium

ovulation
release of the egg by the most mature follicle

progesterone
reproductive hormone in women; assists in endometrial regrowth and inhibition of FSH and LH release