Population dynamics can be applied to human population growth. Earth’s human population is growing rapidly, to the extent that some worry about the ability of the earth’s environment to sustain this population. Long-term exponential growth carries the potential risks of famine, disease, and large-scale death.

Although humans have increased the carrying capacity of their environment, the technologies used to achieve this transformation have caused unprecedented changes to Earth’s environment, altering ecosystems to the point where some may be in danger of collapse. The depletion of the ozone layer, erosion due to acid rain, and damage from global climate change are caused by human activities. The ultimate effect of these changes on our carrying capacity is unknown. As some point out, it is likely that the negative effects of increasing carrying capacity will outweigh the positive ones—the world’s carrying capacity for human beings might actually decrease.

The human population is currently experiencing exponential growth even though human reproduction is far below its biotic potential ((Figure)). To reach its biotic potential, all females would have to become pregnant every nine months or so during their reproductive years. Also, resources would have to be such that the environment would support such growth. Neither of these two conditions exists. In spite of this fact, human population is still growing exponentially. 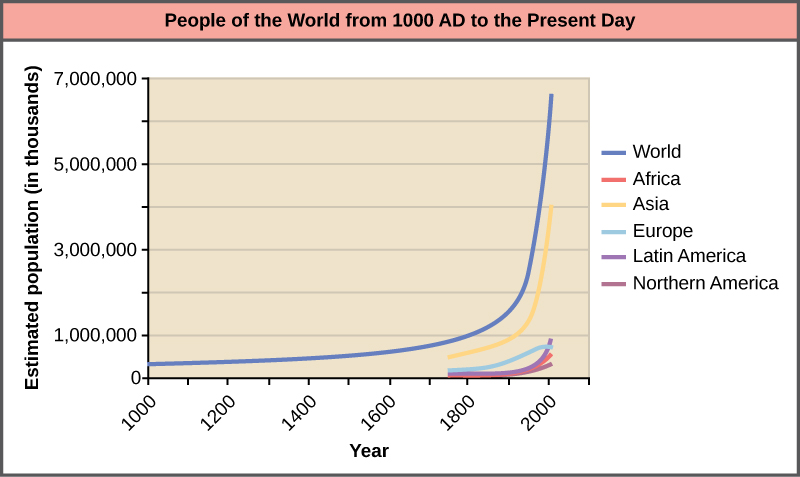 A consequence of exponential human population growth is a reduction in time that it takes to add a particular number of humans to the Earth. (Figure) shows that 123 years were necessary to add 1 billion humans in 1930, but it only took 24 years to add two billion people between 1975 and 1999. As already discussed, our ability to increase our carrying capacity indefinitely my be limited. Without new technological advances, the human growth rate has been predicted to slow in the coming decades. However, the population will still be increasing and the threat of overpopulation remains.

The time between the addition of each billion human beings to Earth decreases over time. (credit: modification of work by Ryan T. Cragun) 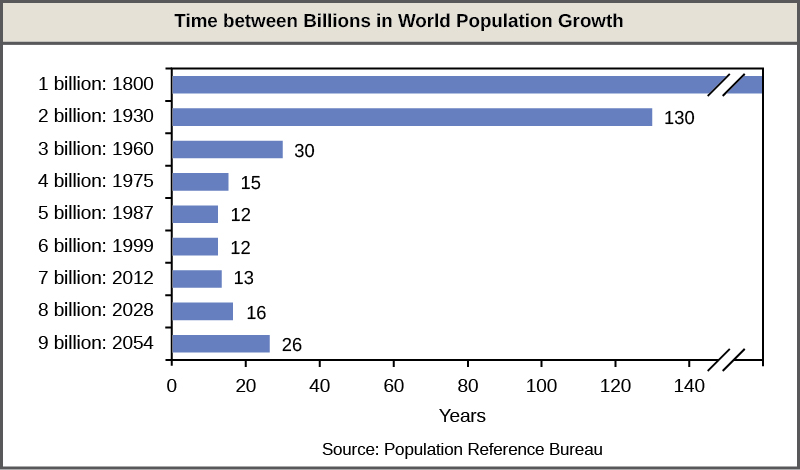 Click through this interactive view of how human populations have changed over time.

Humans are unique in their ability to alter their environment with the conscious purpose of increasing carrying capacity. This ability is a major factor responsible for human population growth and a way of overcoming density-dependent growth regulation. Much of this ability is related to human intelligence, society, and communication. Humans can construct shelter to protect them from the elements and have developed agriculture and domesticated animals to increase their food supplies. In addition, humans use language to communicate this technology to new generations, allowing them to improve upon previous accomplishments.

Age structure diagrams for rapidly growing, slow growing, and stable populations are shown in stages 1 through 3. What type of population change do you think stage 4 represents?

<!–<para>Stage 4 represents a population that is decreasing.–>

The percent growth rate of population in different countries is shown. Notice that the highest growth is occurring in less economically developed countries in Africa and Asia.

Many dire predictions have been made about the world’s population leading to a major crisis called the “population explosion.” In the 1968 book The Population Bomb, biologist Dr. Paul R. Ehrlich wrote, “The battle to feed all of humanity is over. In the 1970s hundreds of millions of people will starve to death in spite of any crash programs embarked upon now. At this late date nothing can prevent a substantial increase in the world death rate.”1 While many experts view this statement as incorrect based on evidence, the laws of exponential population growth are still in effect, and unchecked human population growth cannot continue indefinitely.

Several nations have instituted policies aimed at influencing population. Efforts to control population growth led to the one-child policy in China, which is now being phased out. India also implements national and regional populations to encourage family planning. On the other hand, Japan, Spain, Russia, Iran, and other countries have made efforts to increase population growth after birth rates dipped. Such policies are controversial, and the human population continues to grow. At some point the food supply may run out, but the outcomes are difficult to predict. The United Nations estimates that future world population growth may vary from 6 billion (a decrease) to 16 billion people by the year 2100.

Another result of population growth is the endangerment of the natural environment. Many countries have attempted to reduce the human impact on climate change by reducing their emission of the greenhouse gas carbon dioxide. However, these treaties have not been ratified by every country. The role of human activity in causing climate change has become a hotly debated socio-political issue in some countries, including the United States. Thus, we enter the future with considerable uncertainty about our ability to curb human population growth and protect our environment.

Visit this website and select “Launch movie” for an animation discussing the global impacts of human population growth.

(Figure) Age structure diagrams for rapidly growing, slow growing, and stable populations are shown in stages 1 through 3. What type of population change do you think stage 4 represents?

(Figure) Stage 4 represents a population that is decreasing.

Which type of country has the greatest proportion of young individuals?

Which of the following is not a way that humans have increased the carrying capacity of the environment?

Since the introduction of the Endangered Species Act the number of species on the protected list has more than doubled. Describe how the human population’s growth pattern contributes to the rise in endangered species.

Continued exponential human population growth results in the human population requiring more resources to sustain itself. These resources are usually taken at the expense of the environment and the organisms that rely on the resources in that environment (e.g., habitat destruction for human development, water rerouting for irrigation, etc.). The continued use of fossil fuels to generate power for human activities also contributes to climate change, changing climates in some areas so that certain species can no longer survive there.