The roots of seed plants have three major functions: anchoring the plant to the soil, absorbing water and minerals and transporting them upwards, and storing the products of photosynthesis. Some roots are modified to absorb moisture and exchange gases. Most roots are underground. Some plants, however, also have adventitious roots, which emerge above the ground from the shoot.

Root systems are mainly of two types ((Figure)). Dicots have a tap root system, while monocots have a fibrous root system. A tap root system has a main root that grows down vertically, and from which many smaller lateral roots arise. Dandelions are a good example; their tap roots usually break off when trying to pull these weeds, and they can regrow another shoot from the remaining root. A tap root system penetrates deep into the soil. In contrast, a fibrous root system is located closer to the soil surface, and forms a dense network of roots that also helps prevent soil erosion (lawn grasses are a good example, as are wheat, rice, and corn). Some plants have a combination of tap roots and fibrous roots. Plants that grow in dry areas often have deep root systems, whereas plants growing in areas with abundant water are likely to have shallower root systems.

(a) Tap root systems have a main root that grows down, while (b) fibrous root systems consist of many small roots. (credit b: modification of work by “Austen Squarepants”/Flickr) 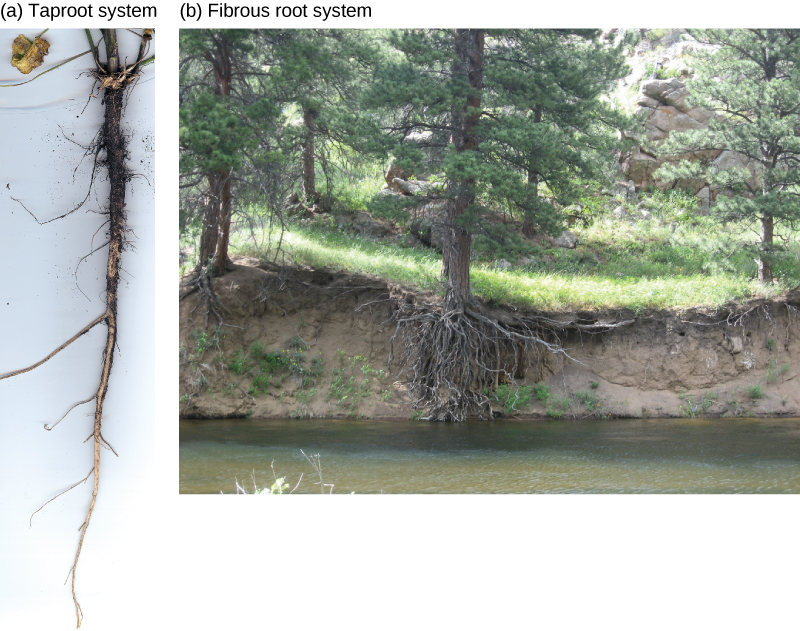 Root growth begins with seed germination. When the plant embryo emerges from the seed, the radicle of the embryo forms the root system. The tip of the root is protected by the root cap, a structure exclusive to roots and unlike any other plant structure. The root cap is continuously replaced because it gets damaged easily as the root pushes through soil. The root tip can be divided into three zones: a zone of cell division, a zone of elongation, and a zone of maturation and differentiation ((Figure)). The zone of cell division is closest to the root tip; it is made up of the actively dividing cells of the root meristem. The zone of elongation is where the newly formed cells increase in length, thereby lengthening the root. Beginning at the first root hair is the zone of cell maturation where the root cells begin to differentiate into special cell types. All three zones are in the first centimeter or so of the root tip.

A longitudinal view of the root reveals the zones of cell division, elongation, and maturation. Cell division occurs in the apical meristem. 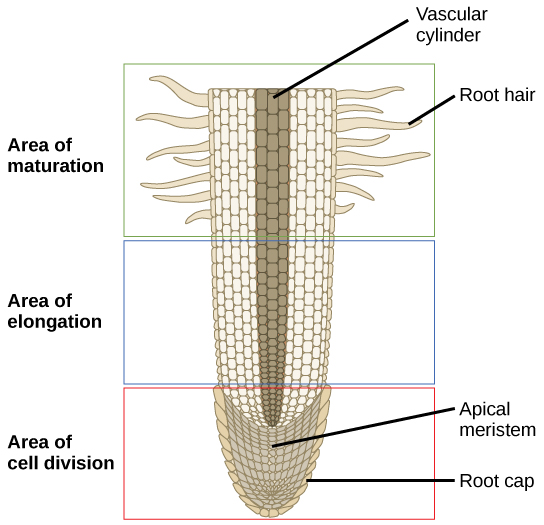 The root has an outer layer of cells called the epidermis, which surrounds areas of ground tissue and vascular tissue. The epidermis provides protection and helps in absorption. Root hairs, which are extensions of root epidermal cells, increase the surface area of the root, greatly contributing to the absorption of water and minerals.

Inside the root, the ground tissue forms two regions: the cortex and the pith ((Figure)). Compared to stems, roots have lots of cortex and little pith. Both regions include cells that store photosynthetic products. The cortex is between the epidermis and the vascular tissue, whereas the pith lies between the vascular tissue and the center of the root.

Staining reveals different cell types in this light micrograph of a wheat (Triticum) root cross section. Sclerenchyma cells of the exodermis and xylem cells stain red, and phloem cells stain blue. Other cell types stain black. The stele, or vascular tissue, is the area inside endodermis (indicated by a green ring). Root hairs are visible outside the epidermis. (credit: scale-bar data from Matt Russell) 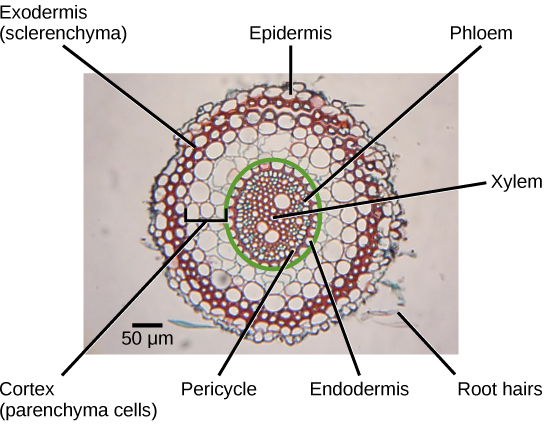 The vascular tissue in the root is arranged in the inner portion of the root, which is called the stele ((Figure)). A layer of cells known as the endodermis separates the stele from the ground tissue in the outer portion of the root. The endodermis is exclusive to roots, and serves as a checkpoint for materials entering the root’s vascular system. A waxy substance called suberin is present on the walls of the endodermal cells. This waxy region, known as the Casparian strip, forces water and solutes to cross the plasma membranes of endodermal cells instead of slipping between the cells. This ensures that only materials required by the root pass through the endodermis, while toxic substances and pathogens are generally excluded. The outermost cell layer of the root’s vascular tissue is the pericycle, an area that can give rise to lateral roots. In dicot roots, the xylem and phloem of the stele are arranged alternately in an X shape, whereas in monocot roots, the vascular tissue is arranged in a ring around the pith.

In (left) typical dicots, the vascular tissue forms an X shape in the center of the root. In (right) typical monocots, the phloem cells and the larger xylem cells form a characteristic ring around the central pith. 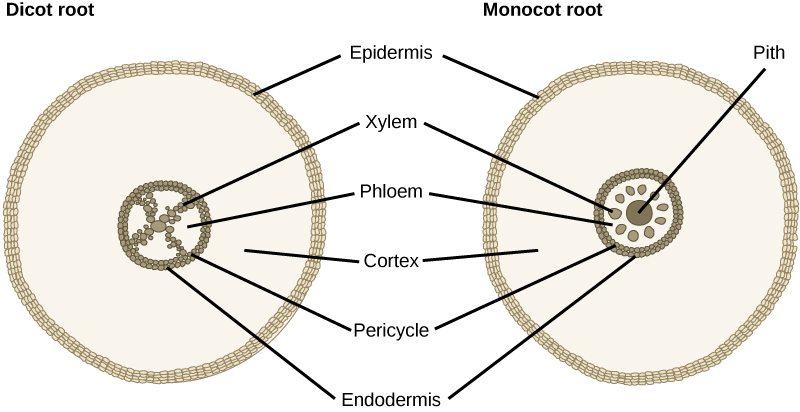 Root structures may be modified for specific purposes. For example, some roots are bulbous and store starch. Aerial roots and prop roots are two forms of aboveground roots that provide additional support to anchor the plant. Tap roots, such as carrots, turnips, and beets, are examples of roots that are modified for food storage ((Figure)).

Many vegetables are modified roots. 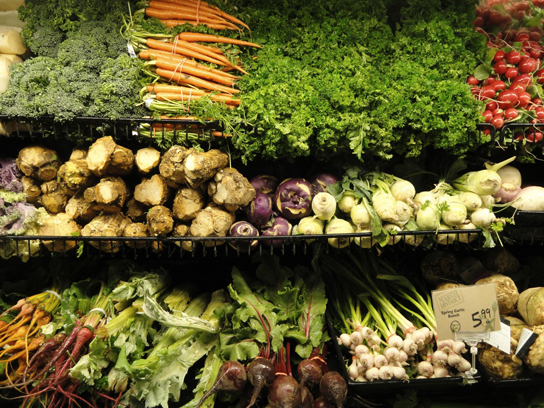 Epiphytic roots enable a plant to grow on another plant. For example, the epiphytic roots of orchids develop a spongy tissue to absorb moisture. The banyan tree (Ficus sp.) begins as an epiphyte, germinating in the branches of a host tree; aerial roots develop from the branches and eventually reach the ground, providing additional support ((Figure)). In screwpine (Pandanus sp.), a palm-like tree that grows in sandy tropical soils, aboveground prop roots develop from the nodes to provide additional support.

The (a) banyan tree, also known as the strangler fig, begins life as an epiphyte in a host tree. Aerial roots extend to the ground and support the growing plant, which eventually strangles the host tree. The (b) screwpine develops aboveground roots that help support the plant in sandy soils. (credit a: modification of work by “psyberartist”/Flickr; credit b: modification of work by David Eikhoff)

Roots help to anchor a plant, absorb water and minerals, and serve as storage sites for food. Taproots and fibrous roots are the two main types of root systems. In a taproot system, a main root grows vertically downward with a few lateral roots. Fibrous root systems arise at the base of the stem, where a cluster of roots forms a dense network that is shallower than a taproot. The growing root tip is protected by a root cap. The root tip has three main zones: a zone of cell division (cells are actively dividing), a zone of elongation (cells increase in length), and a zone of maturation (cells differentiate to form different kinds of cells). Root vascular tissue conducts water, minerals, and sugars. In some habitats, the roots of certain plants may be modified to form aerial roots or epiphytic roots.

Roots that enable a plant to grow on another plant are called ________.

The ________ forces selective uptake of minerals in the root.

What might happen to a root if the pericycle disappeared?

The root would not be able to produce lateral roots.

Casparian strip
waxy coating that forces water to cross endodermal plasma membranes before entering the vascular cylinder, instead of moving between endodermal cells

endodermis
layer of cells in the root that forms a selective barrier between the ground tissue and the vascular tissue, allowing water and minerals to enter the root while excluding toxins and pathogens

fibrous root system
type of root system in which the roots arise from the base of the stem in a cluster, forming a dense network of roots; found in monocots

root hair
hair-like structure that is an extension of epidermal cells; increases the root surface area and aids in absorption of water and minerals

stele
inner portion of the root containing the vascular tissue; surrounded by the endodermis