Most macromolecules are made from single subunits, or building blocks, called monomers. The monomers combine with each other using covalent bonds to form larger molecules known as polymers. In doing so, monomers release water molecules as byproducts. This type of reaction is dehydration synthesis, which means “to put together while losing water.”

In the dehydration synthesis reaction above, two glucose molecules link to form the disaccharide maltose. In the process, it forms a water molecule.

In a dehydration synthesis reaction ((Figure)), the hydrogen of one monomer combines with the hydroxyl group of another monomer, releasing a water molecule. At the same time, the monomers share electrons and form covalent bonds. As additional monomers join, this chain of repeating monomers forms a polymer. Different monomer types can combine in many configurations, giving rise to a diverse group of macromolecules. Even one kind of monomer can combine in a variety of ways to form several different polymers. For example, glucose monomers are the constituents of starch, glycogen, and cellulose.

Polymers break down into monomers during hydrolysis. A chemical reaction occurs when inserting a water molecule across the bond. Breaking a covalent bond with this water molecule in the compound achieves this ((Figure)). During these reactions, the polymer breaks into two components: one part gains a hydrogen atom (H+) and the other gains a hydroxyl molecule (OH–) from a split water molecule.

In the hydrolysis reaction here, the disaccharide maltose breaks down to form two glucose monomers by adding a water molecule. Note that this reaction is the reverse of the synthesis reaction in (Figure).

Dehydration and hydrolysis reactions are catalyzed, or “sped up,” by specific enzymes; dehydration reactions involve the formation of new bonds, requiring energy, while hydrolysis reactions break bonds and release energy. These reactions are similar for most macromolecules, but each monomer and polymer reaction is specific for its class. For example, catalytic enzymes in the digestive system hydrolyze or break down the food we ingest into smaller molecules. This allows cells in our body to easily absorb nutrients in the intestine. A specific enzyme breaks down each macromolecule. For instance, amylase, sucrase, lactase, or maltase break down carbohydrates. Enzymes called proteases, such as pepsin and peptidase, and hydrochloric acid break down proteins. Lipases break down lipids. These broken down macromolecules provide energy for cellular activities.

Visit this site to see visual representations of dehydration synthesis and hydrolysis.

Proteins, carbohydrates, nucleic acids, and lipids are the four major classes of biological macromolecules—large molecules necessary for life that are built from smaller organic molecules. Macromolecules are comprised of single units scientists call monomers that are joined by covalent bonds to form larger polymers. The polymer is more than the sum of its parts: it acquires new characteristics, and leads to an osmotic pressure that is much lower than that formed by its ingredients. This is an important advantage in maintaining cellular osmotic conditions. A monomer joins with another monomer with water molecule release, leading to a covalent bond forming. Scientists call these dehydration or condensation reactions. When polymers break down into smaller units (monomers), they use a water molecule for each bond broken by these reactions. Such reactions are hydrolysis reactions. Dehydration and hydrolysis reactions are similar for all macromolecules, but each monomer and polymer reaction is specific to its class. Dehydration reactions typically require an investment of energy for new bond formation, while hydrolysis reactions typically release energy by breaking bonds.

Dehydration synthesis leads to formation of

During the breakdown of polymers, which of the following reactions takes place?

What type of reaction occurs to make ethyl ethanoate?

Why are biological macromolecules considered organic?

Biological macromolecules are organic because they contain carbon.

What role do electrons play in dehydration synthesis and hydrolysis?

In a dehydration synthesis reaction, the hydrogen of one monomer combines with the hydroxyl group of another monomer, releasing a molecule of water. This creates an opening in the outer shells of atoms in the monomers, which can share electrons and form covalent bonds.

Amino acids have the generic structure seen below, where R represents different carbon-based side chains. 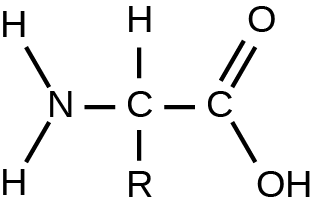 Describe how the structure of amino acids allows them to be linked into long peptide chains to form proteins.

monomer
smallest unit of larger molecules that are polymers

polymer
chain of monomer residues that covalent bonds link; polymerization is the process of polymer formation from monomers by condensation