Nations that frequently trade with each other may decide to formalize their relationship. The governments meet and work out agreements for a common economic policy. The result is an economic community or, in other cases, a bilateral trade agreement (an agreement between two countries to lower trade barriers). For example, two nations may agree upon a preferential tariff, which gives advantages to one nation (or several nations) over others. When members of the British Commonwealth (countries that are former British territories) trade with Great Britain, they pay lower tariffs than do other nations. For example, Canada and Australia are former British territories but still members of the British Commonwealth. You will note that Queen Elizabeth still appears on Canadian currency and the Union Jack is still incorporated into the Australian flag. In other cases, nations may form free-trade associations. In a free-trade zone, few duties or rules restrict trade among the partners, but nations outside the zone must pay the tariffs set by the individual members.

The North American Free Trade Agreement (NAFTA) created the world’s largest free-trade zone. The agreement was ratified by the U.S. Congress in 1993. It includes Canada, the United States, and Mexico, with a combined population of 450 million and an economy of over $20.8 trillion.

Canada, one of the largest U.S. trading partners, entered a free-trade agreement with the United States in 1988. Thus, most of the new long-run opportunities opened for U.S. business under NAFTA are in Mexico, America’s third-largest trading partner. Before NAFTA, tariffs on Mexican exports to the United States averaged just 4 percent, and most goods entered the United States duty-free, so NAFTA’s primary impact was to open the Mexican market to U.S. companies. When the treaty went into effect, tariffs on about half the items traded across the Rio Grande disappeared. Since NAFTA came into effect, U.S.-Mexican trade has increased from $80 billion to $515 billion annually. The pact removed a web of Mexican licensing requirements, quotas, and tariffs that limited transactions in U.S. goods and services. For instance, the pact allows U.S. and Canadian financial-services companies to own subsidiaries in Mexico for the first time in 50 years. 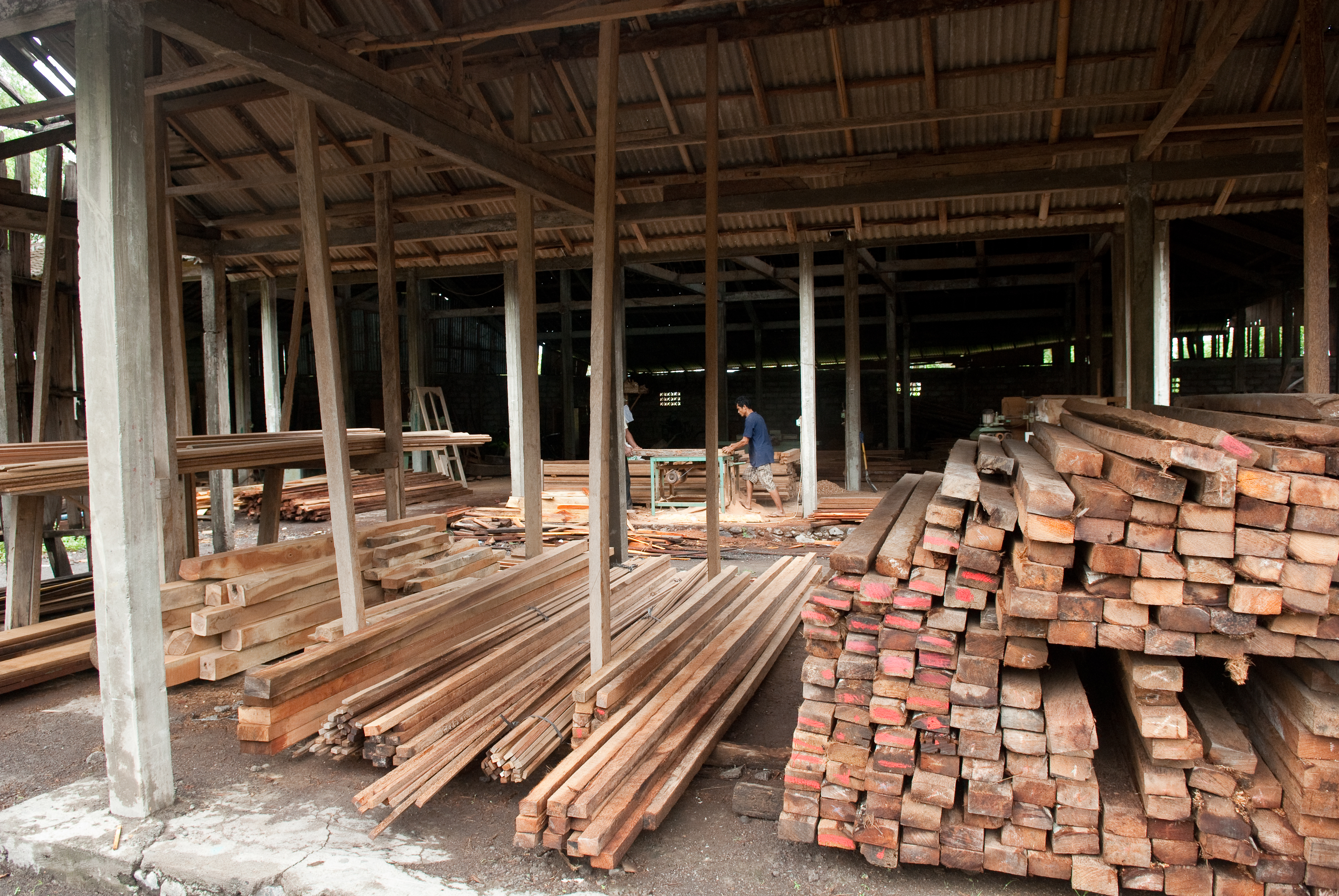 The real test of NAFTA will be whether it can deliver rising prosperity on both sides of the Rio Grande. For Mexicans, NAFTA must provide rising wages, better benefits, and an expanding middle class with enough purchasing power to keep buying goods from the United States and Canada. That scenario seems to be working. At the Delphi Corp. auto parts plant in Ciudad Juárez, just across the border from El Paso, Texas, the assembly line is a cross section of working-class Mexico. In the years since NAFTA lowered trade and investment barriers, Delphi has significantly expanded its presence in the country. Today it employs 70,000 Mexicans, who every day receive up to 70 million U.S.-made components to assemble into parts. The wages are modest by U.S. standards—an assembly-line worker with two years’ experience earns about $2.30 an hour. But that’s triple Mexico’s minimum wage, and Delphi jobs are among the most coveted in Juárez. The United States recently notified the Canadian and Mexican governments that it intends to renegotiate aspects of the NAFTA agreement.

The largest new trade agreement is Mercosur, which includes Peru, Brazil, Argentina, Uruguay, and Paraguay. The elimination of most tariffs among the trading partners has resulted in trade revenues that currently exceed $16 billion annually. Recent recessions in Mercosur countries have limited economic growth, even though trade among Mercosur countries has continued to grow.

The newest free trade agreement is the Central America Free Trade Agreement (CAFTA) passed in 2005. Besides the United States, the agreement includes Costa Rica, the Dominican Republic, El Salvador, Guatemala, Honduras, and Nicaragua. The United States is already the principal exporter to these nations, so economists don’t think that it will result in a major increase in U.S. exports. It will, however, reduce tariffs on exports to CAFTA countries. Already, some 80 percent of the goods imported into the United States from CAFTA nations are tariff-free. CAFTA countries may benefit from the new permanent trade deal if U.S. multinational firms deepen their investment in the region.

In 1993, the member countries of the European Community (EC) ratified the Maastricht Treaty, which proposed to take the EC further toward economic, monetary, and political union. Although the heart of the treaty deals with developing a unified European Market, Maastricht was also intended to increase integration among European Union (EU) members.

The EU has helped increase this integration by creating a borderless economy for the 28 European nations, shown on the map in (Figure).

European Union member states have set up common institutions to which they delegate some of their sovereignty so that decisions on specific matters of joint interest can be made democratically at the European level. This pooling of sovereignty is also called European integration. In 2016, citizens of the United Kingdom voted to leave the European Union, a plan known as Brexit, which could take several years to occur. 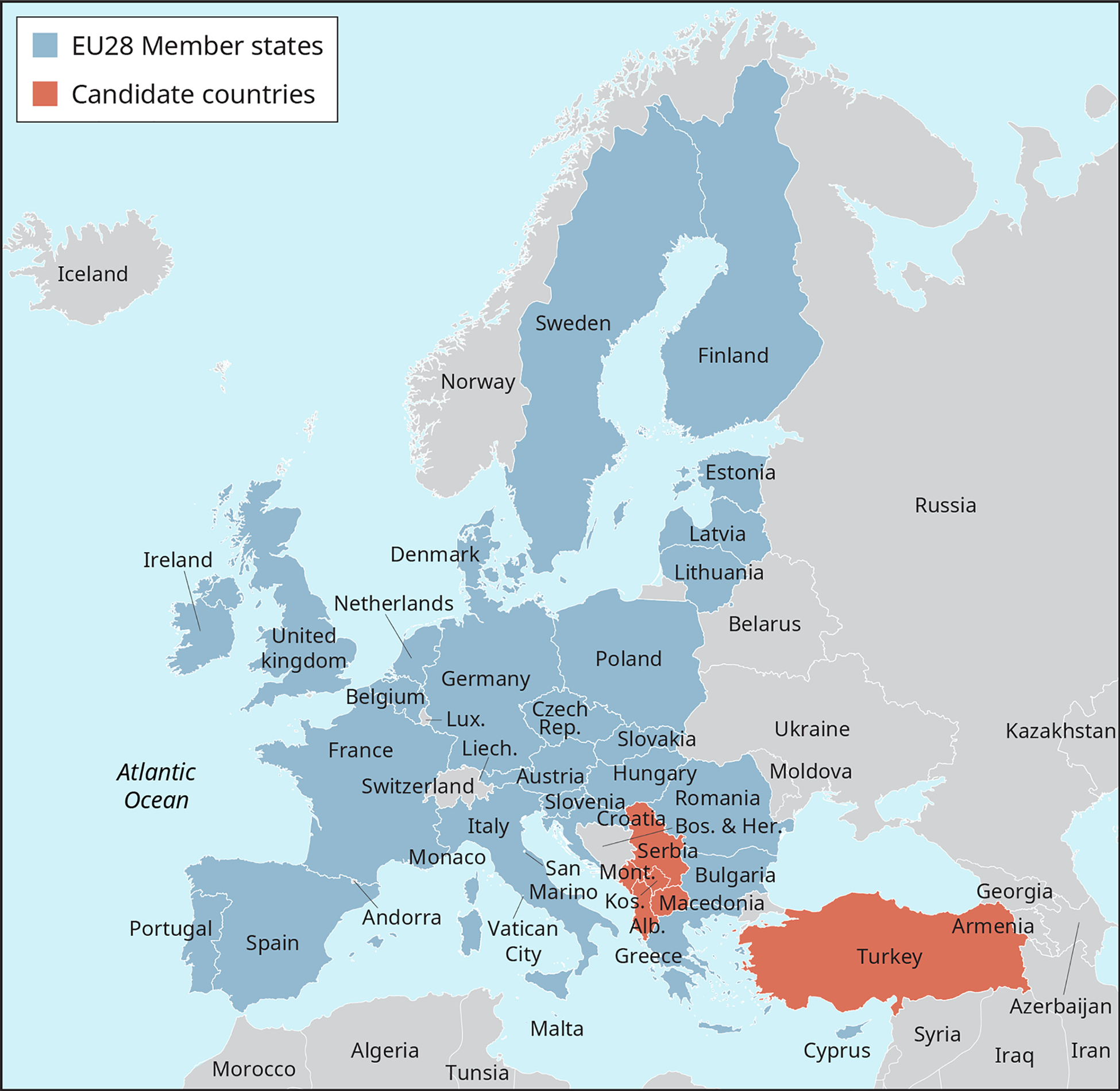 One of the principal objectives of the European Union is to promote economic progress of all member countries. The EU has stimulated economic progress by eliminating trade barriers, differences in tax laws, and differences in product standards, and by establishing a common currency. A new European Community Bank was created, along with a common currency called the euro. The European Union’s single market has created 2.5 million new jobs since it was founded and generated more than $1 trillion in new wealth.

The opening of national EU markets has brought down the price of national telephone calls by 50 percent since 1998. Under pressure of competition, the prices of airfares in Europe have fallen significantly. The removal of national restrictions has enabled more than 15 million Europeans to go to another EU country to work or spend their retirement.

The EU is a very tough antitrust enforcer; some would say it is tougher than the United States. The EU, for example, fined Google $2.7 billion for favoring some of its own services in its search results.

Unlike in the United States, the EU can seal off corporate offices for unspecified periods to prevent destruction of evidence and enter the homes, cars, yachts, and other personal property of executives suspected of abusing their companies’ market power or conspiring to fix prices.

Microsoft has been fighting the European Court since 2002, with no quick end in sight. The Court fined Microsoft for monopolizing internet access by offering Internet Explorer with its Windows software. The company is also appealing a Court decision requiring it to share code with “open source” companies. Another big U.S. company, Coca-Cola, settled a six-year antitrust dispute with the European Court by agreeing to strict limits on its sales tactics. Coke can’t sign exclusive agreements with retailers that would ban competing soft drinks or give retailers rebates based on sales volume. Furthermore, it must give rivals, like Pepsi, 20 percent of the space in Coke coolers so Pepsi can stock its own brands. If Coke violates the terms of the agreement, it will be fined 10 percent of its worldwide revenue (over $2 billion).

An entirely different type of problem facing global businesses is the possibility of a protectionist movement by the EU against outsiders. For example, European automakers have proposed holding Japanese imports at roughly their current 10 percent market share. The Irish, Danes, and Dutch don’t make cars and have unrestricted home markets; they are unhappy at the prospect of limited imports of Toyotas and Hondas. Meanwhile, France has a strict quota on Japanese cars to protect its own Renault and Peugeot. These local automakers could be hurt if the quota is raised at all.

Interestingly, a number of big U.S. companies are already considered more “European” than many European companies. Coke and Kellogg’s are considered classic European brand names. Ford and General Motors compete for the largest share of auto sales on the continent. Apple, IBM, and Dell dominate their markets. General Electric, AT&T, and Westinghouse are already strong all over Europe and have invested heavily in new manufacturing facilities there.

The European Union proposed a constitution that would centralize powers at the Union level and decrease the powers of individual member countries. It also would create a single voice in world affairs by creating a post of foreign minister. The constitution also gave the EU control over political asylum, immigration, guaranteed freedom of speech, and collective labor bargaining. In order to become law, each EU country had to ratify the constitution. The two most powerful countries in the EU, France and Germany, voted “no” in the summer of 2005. Citizens of both countries were afraid that the constitution would draw jobs away from Western Europe and to the Eastern European EU countries. These new members of the EU have lower wage rates and fewer regulations. Voters were also worried that the constitution would result in free-market reforms along American or British lines over France and Germany’s traditional social protections. Concerns over immigration also sparked the referendum vote that is leading to the United Kingdom leaving the European Union.

European integration
The delegation of limited sovereignty by European Union member states to the EU so that common laws and policies can be created at the European level.

free-trade zone
An area where the nations allow free, or almost free, trade among each other while imposing tariffs on goods of nations outside the zone.

preferential tariff
A tariff that is lower for some nations than for others.