Acting in an ethical manner is one of the four components of the pyramid of corporate social responsibility (CSR), which is the concern of businesses for the welfare of society as a whole. It consists of obligations beyond those required by law or union contract. This definition makes two important points. First, CSR is voluntary. Beneficial action required by law, such as cleaning up factories that are polluting air and water, is not voluntary. Second, the obligations of corporate social responsibility are broad. They extend beyond investors in the company to include workers, suppliers, consumers, communities, and society at large.

Many companies continue to work hard to make the world a better place to live. Recent data suggests that Fortune 500 companies spend more than $15 billion annually on CSR activities. Consider the following examples:

Peter Drucker, the late globally respected management expert, said that we should look first at what an organization does to society and second at what it can do for society. This idea suggests that social responsibility has two basic dimensions: legality and responsibility. 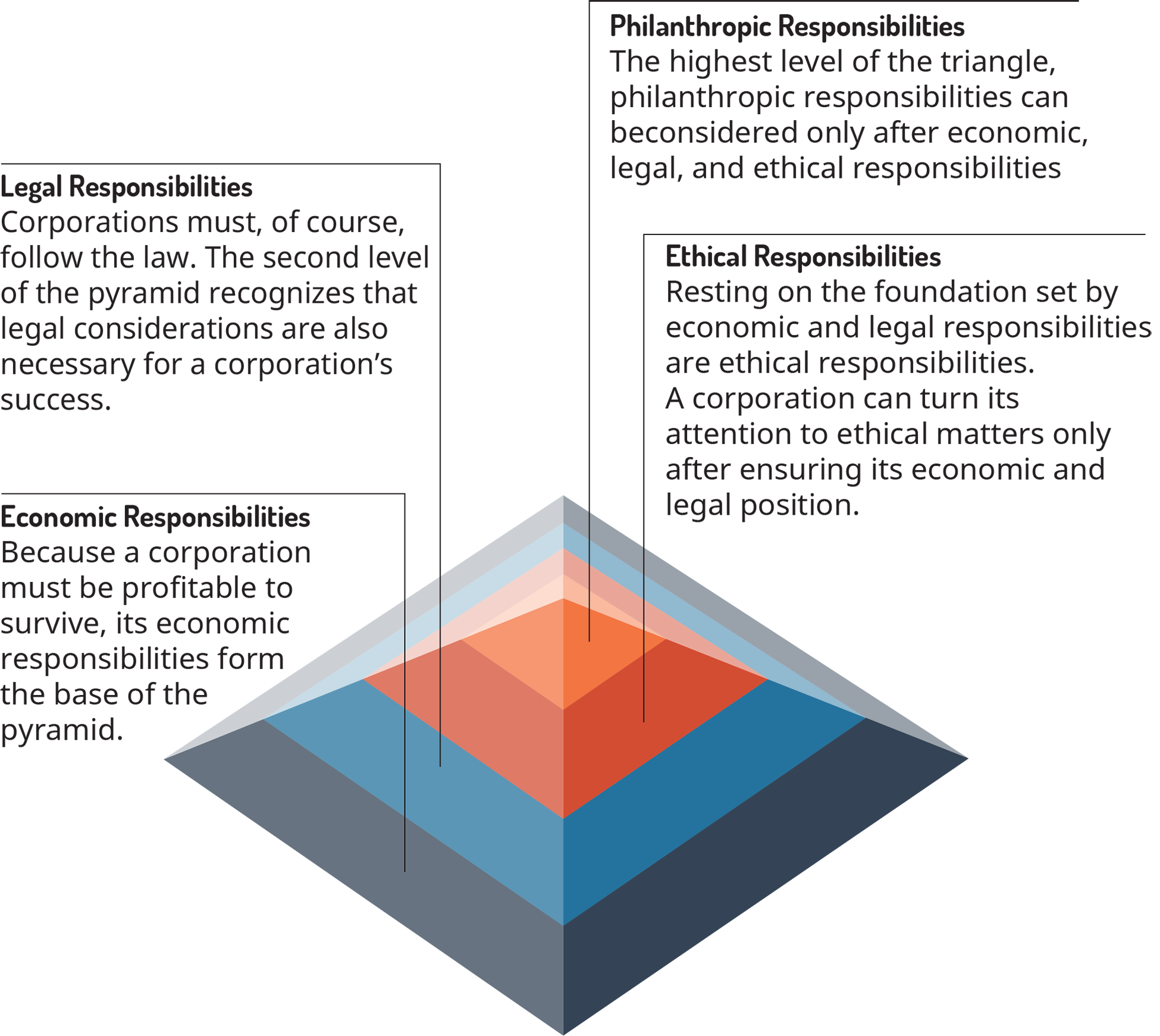 The idea of corporate social responsibility is so widespread today that it is hard to conceive of a company continually acting in illegal and irresponsible ways. Nevertheless, such actions do sometimes occur, which can create financial ruin for organizations, extreme financial hardships for many former employees, and general struggles for the communities in which they operate. Unfortunately, top executives still walk away with millions. Some, however, will ultimately pay large fines and spend time in prison for their actions. Federal, state, and local laws determine whether an activity is legal or not. The laws that regulate business are discussed later in this module.

Sometimes companies act irresponsibly, yet their actions are legal. For example, the Minnesota-based company that makes MyPillow was recently fined $1 million by the state of California for making unsubstantiated claims that the “most comfortable pillow you’ll ever own” could help alleviate medical conditions such as snoring, fibromyalgia, migraines, and other disorders. The company’s CEO countered that the claims were actually made by customers; these testimonials were posted on the company’s website but later removed. In addition to the fine, the company faced several class-action lawsuits, and the Better Business Bureau has revoked MyPillow’s accreditation.

As a carpenter, Bill Whyte was always looking for a solution to his dry, cracked hands, especially in the harsh New Hampshire winters. After trying many commercial lotions that didn’t really work, Whyte experimented with olive oil and beeswax to come up with a soothing balm to help heal rough hands. Mixing up the concoction at home, Whyte came up with a product that seemed to work and was made from natural ingredients.

Originally called Bear Paw, the lotion became known as Badger Balm after a friend found a competing product already named Bear Paw. Whyte set up a production line at home to fill the tins. Soon he was pounding the pavement in the town of Gilsum, trying to sell the new product to hardware stores, lumber yards, and health food stores.

Fast-forward a little more than 20 years from his early days of experimentation, and Whyte (affectionately known as the “head badger”) runs W.S. Badger Company with the same goals and passions he started with back in the mid-1990s. The company uses only organic plant extracts, exotic oils, beeswax, and minerals to make the most effective products to soothe, heal, and protect the body. And the natural ingredients come from all over the world—for example, organic extra virgin olive oil from Spain, organic rose essential oil from Bulgaria, and bergamot oil from southern Italy.

Badger’s homey culture is no accident. In fact, in the early days, Whyte made soup every Friday for the small staff. Today, Whyte and family members, including his wife Kathy, chief operating officer; daughter Rebecca, head of sustainability and innovation; and daughter Emily, head of sales and marketing, all embrace the ethical and social principles of this family business that have made the company a success.

To reinforce the commitment of being socially responsible and demonstrating transparency, W.S. Badger Company became a Certified Benefit Corporation, or B Corp for short. This certification requires companies to meet rigorous standards for transparency, accountability, and social and environmental performance. (Benefit Corporations are discussed in more detail later in this module.)

Becoming a B Corp. has helped the company organize how it operates. For example, pay for the highest-paid full-time employee is capped at five times that of the lowest paid, which is now $15 an hour (more than double New Hampshire’s minimum wage); a portion of company profits flows to employees via profit sharing, and all employees participate in a bonus plan; and new parents are encouraged to bring their babies to work, a program that has helped foster a new style of teamwork for the entire organization, as well as increase employee morale. In addition, Badger donates 10 percent of its pre-tax profits annually to nonprofit organizations that focus on the health and welfare of children, matches employee contributions to charitable causes (up to $100 per employee), and donates an additional $50 to a nonprofit chosen by each employee on their birthday.

Badger staff, which now number more than 100, enjoy a living wage, great benefits, and a socially responsible work environment thanks to a visionary who found an eco-friendly way to soothe his rough hands and created an ethical business as part of his journey.

The vast majority of business activities fall into the category of behavior that is both legal and responsible. Most companies act legally, and most try to be socially responsible. Research shows that consumers, especially those under 30, are likely to buy brands that have excellent ethical track records and community involvement. Outdoor specialty retailer REI, for example, recently announced that it gave back nearly 70 percent of its profits to the outdoor community. A member cooperative, the company invested a record $9.3 million in its nonprofit partners in 2016.

corporate social responsibility (CSR)
The concern of businesses for the welfare of society as a whole; consists of obligations beyond those required by law or contracts.