Distributing and Promoting Products and Services

Procter & Gamble believes shoppers make up their mind about a product in about the time it takes to read this paragraph.

This “first moment of truth,” as P&G calls it, is the three to seven seconds when someone notices an item on a store shelf. Despite spending billions on traditional advertising, the consumer-products giant thinks this instant is one of its most important marketing opportunities. It recently created a position entitled Director of First Moment of Truth, or Director of FMOT (pronounced “EFF-mott”), to produce sharper, flashier in-store displays. There is a 15-person FMOT department at P&G headquarters in Cincinnati as well as 50 FMOT leaders stationed around the world.

Jim Tincher, “Your Moment of Truth,” Customer Think, http://customerthink.com, August 30, 2016.
Pet lovers want the best for their animals, and choosing a proper diet is an essential part of raising happy, healthy pets. That’s why many dog food providers such as Purina and Blue Buffalo are creating specific size- and age-appropriate diets for dogs. They often use sales promotion to encourage animal lovers to transition their pets to premium-brand food, encourage pet owners to track their pets’ performance during the trial, and evaluate the “before and after” health of their pets. What promotional objectives underlie these practices? (Credit: Ted Van Pelt/ Flickr/ Attribution 2.0 Generic (CC BY 2.0)) 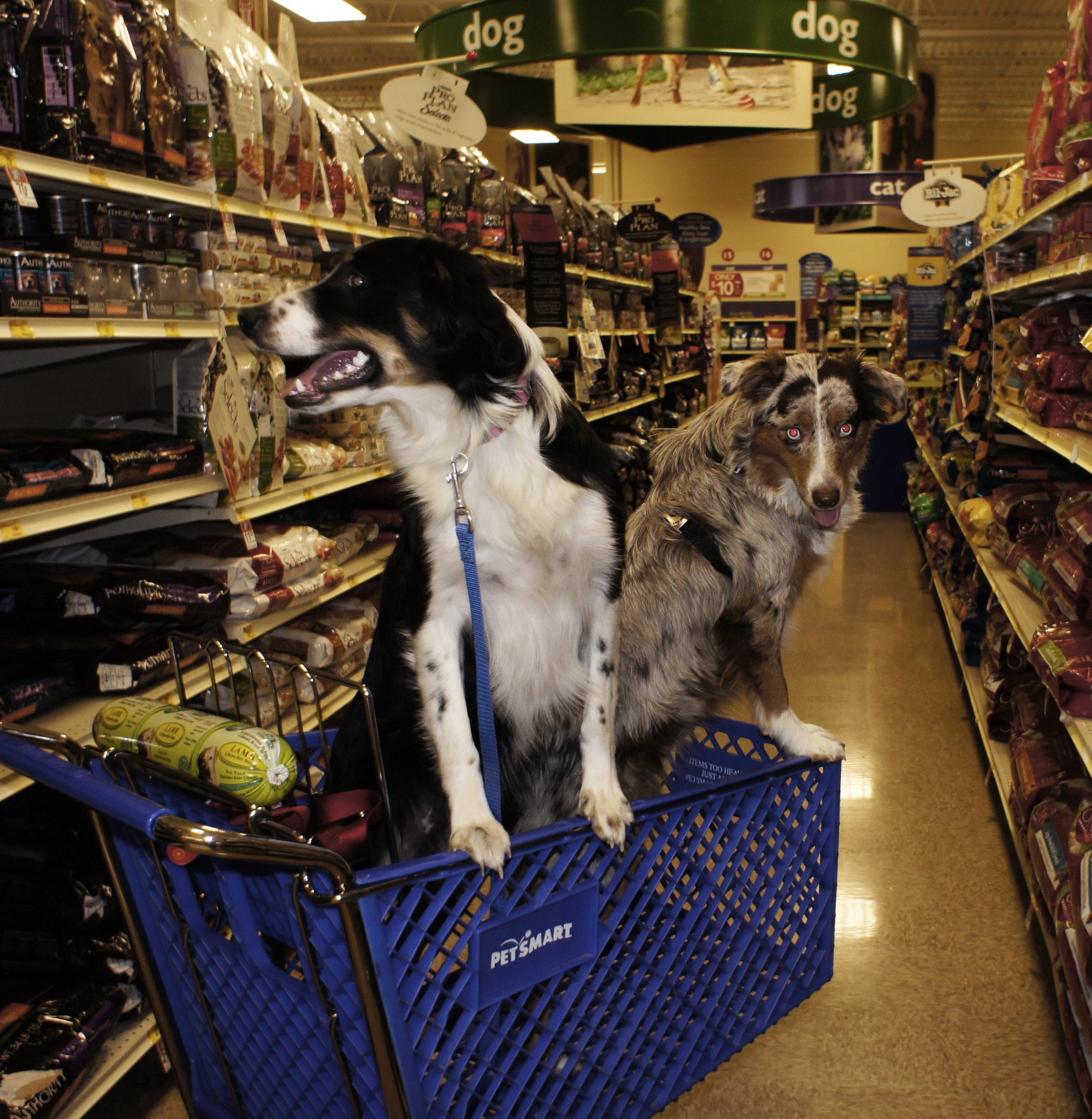 One of P&G’s most prominent in-store promotions has been for a new line of Pampers. In the United States, P&G came up with what it calls a “shopper concept”—a single promotional theme that allows it to pitch products in a novel way. The theme for Pampers was “Babies First.” In stores, the company handed out information on childhood immunizations, car-seat safety, and healthy diets while promoting its diapers and wipes in other parts of the store. To market Pampers diapers in the United Kingdom, P&G persuaded retailers earlier this year to put fake doorknobs high up on restroom doors, to remind parents how much babies need to stretch.

The objectives of a promotion depend on the general behavior of target consumers, as described in (Figure). For example, marketers who are targeting loyal users of their product don’t want to change behavior. Instead, they want to reinforce existing behavior or increase product usage. Frequent-buyer programs that reward consumers for repeat purchases can be effective in strengthening brand loyalty. Other types of promotions are more effective with customers prone to brand switching or with those who are loyal to a competitor’s product. Cents-off coupons, free samples, or an eye-catching display in a store will often entice shoppers to try a different brand.

The use of sales promotion for services products depends on the type of services. Consumer services, such as hairstyling, rely heavily on sales promotions (such as providing half off the price of a haircut for senior citizens on Mondays). Professional services, however, use very little sales promotion. Doctors, for example, do not often use coupons for performing an appendectomy, for example. In fact, service product companies must be careful not to utilize too many sales-promotion tactics because they can lower the credibility of the firm. Attorneys do not have a sale on providing services for divorce proceedings, for example.

Two growing areas of sales promotion are couponing and product placement. American consumers receive over $321 billion worth of coupons each year and redeem about $3 billion.

Almost 85 percent of all Americans redeem coupons. Sunday newspaper supplements remain the number one source, but there has been explosive growth of online or consumer-printed coupons. General Mills, Kimberly-Clark, and General Electric like online coupons because they have a higher redemption rate. Coupons are used most often for grocery shopping. Do they save you money? One study found that people using coupons at the grocery store spent eight percent more than those who didn’t.

Product placement is paid inclusion of brands in mass media programming. This includes movies, TV, books, music videos, and video games. So when you see Ford vehicles in the latest James Bond movie or Tom Hanks putting on a pair on Nikes on-screen, that is product placement. Product placement has become a huge business. For example, companies paid more than $6 billion in a recent year to have their products placed prominently in a film or television program; that figure is expected to reach more than $11 billion by 2019.

It is easy to go overboard with this trend and be portrayed as a parody, however. The 2017 Emoji Movie is an example of failed product placements. The theme of the movie centered on various emojis caught in a smartphone as they are forced to play Candy Crush and say glowing things about such apps as Dropbox and Instagram as they make their way through the phone.

Also, some have suggested that product placement might doom the products and companies. For example, Atari products appeared in the classic 1982 film Blade Runner, but the original company went out of business shortly after the movie was released, while another product, the Cuisinart food processor, had to settle a price-fixing scandal after making an appearance in the film. This has not stopped companies such as Sony, Peugeot, and Coca-Cola from tempting fate by appearing in the recently released Blade Runner 2049.

Many large companies are cutting their advertising budgets to spend more on product placements. One area of product placement that continues to raise ethical issues is so-called “experts” being paid to mention brands on the air.

Whether making a cameo appearance or starring in a major role, brands are top talent in the entertainment world. NASCAR drivers, racing cars, and tracks are speckled with corporate brands, and Coca-Cola sits at the judges’ table on American Idol. Drive through the video game Need for Speed and you will see Best Buy stores along the way, as well as billboards for Burger King and other products. And Reese’s Pieces are forever immortalized in the movie E.T. the Extra-Terrestrial. Does product placement blur the lines between advertising and content, and should viewers be concerned? (Credit: roger blake/ Flickr/ Attribution 2.0 Generic (CC BY 2.0))

Influencer Marketing and Product Placement: Are They Always Ethical?

Traditional marketing vehicles such as advertising have been regulated to include limitations on promotions for such products as tobacco and alcohol. One area that has not had the same type of regulatory oversight has been the practice of product placement and companies working with “influencers” to market their products.

In a classic scene from Forrest Gump, actor Tom Hanks, who plays Gump, meets President Kennedy and says, “The best thing about visiting the president is the food! Now, since it was all free, and I wasn’t hungry but thirsty, I must have drank me 15 Dr Peppers.” Since Forrest Gump was a family film seen by many children, this scene could influence them to think that consuming large quantities of the beverage was appropriate and might even give them the stamina to undertake cross-country marathons (one of Gump’s other activities in the film). Unlike traditional television and print advertising, product placement in films, television shows, and even video games has not been heavily regulated, but that’s about to change. For instance, in Australia, the Alcohol Beverages Advertising Code (ABAC) is instituting expanded regulation of advertising and product placement for new, nontraditional media that have not been regulated previously.

Companies are also enlisting influencers to help them reach customers. Influencers might be people who have achieved recognition as an expert in a certain area, or someone who has amassed a large number of followers on platforms such as Facebook, Twitter, or Instagram. The use of influencers has raised concern about the ethics of companies such as Amazon, Apple, and Google when they enlist teachers such as Kayla Delzer, who has her own brand, Top Dog Teacher (http://www.topdogteaching.com), that touts her teaching approaches through workshops. Since Delzer incorporates technology into her classroom, she has attracted the attention of both small start-ups such as Seesaw and large companies such as Apple, which provide her with products and services in the hope that disseminating her experiences through blogs, tweets, and workshops will encourage her followers to adopt their technologies. Because there is little research-based evidence that these technologies actually improve student outcomes, this situation presents an ethical dilemma for school administrators.

Another ethical dilemma is that some influencers use fake followers to increase the appearance of extended media reach, thus being able to command larger sums of money from various companies for their services. One of the most blatant examples of signing up fake followers was the appearance of a vending machine in Moscow where patrons could use a credit card to purchase likes, favorites, and followers for their social media sites.

Immediate purchase is the goal of most sales promotion, whether it is aimed at consumers or the trade (wholesalers and retailers). The most popular sales promotions are coupons, samples, product placement, premiums, contests, and sweepstakes. Trade shows, conventions, and point-of-purchase displays are other types of sales promotion.