Before the twentieth century, there was very little government regulation of the U.S. financial or monetary systems. In 1907, however, several large banks failed, creating a public panic that led worried depositors to withdraw their money from other banks. Soon many other banks had failed, and the U.S. banking system was near collapse. The panic of 1907 was so severe that Congress created the Federal Reserve System in 1913 to provide the nation with a more stable monetary and banking system.

The Federal Reserve System (commonly called the Fed) is the central bank of the United States. The Fed’s primary mission is to oversee the nation’s monetary and credit system and to support the ongoing operation of America’s private-banking system. The Fed’s actions affect the interest rates banks charge businesses and consumers, help keep inflation under control, and ultimately stabilize the U.S. financial system. The Fed operates as an independent government entity. It derives its authority from Congress but its decisions do not have to be approved by the president, Congress, or any other government branch. However, Congress does periodically review the Fed’s activities, and the Fed must work within the economic framework established by the government.

The Fed consists of 12 district banks, each covering a specific geographic area. (Figure) shows the 12 districts of the Federal Reserve. Each district has its own bank president who oversees operations within that district.

Originally, the Federal Reserve System was created to control the money supply, act as a borrowing source for banks, hold the deposits of member banks, and supervise banking practices. Its activities have since broadened, making it the most powerful financial institution in the United States. Today, four of the Federal Reserve System’s most important responsibilities are carrying out monetary policy, setting rules on credit, distributing currency, and making check clearing easier. 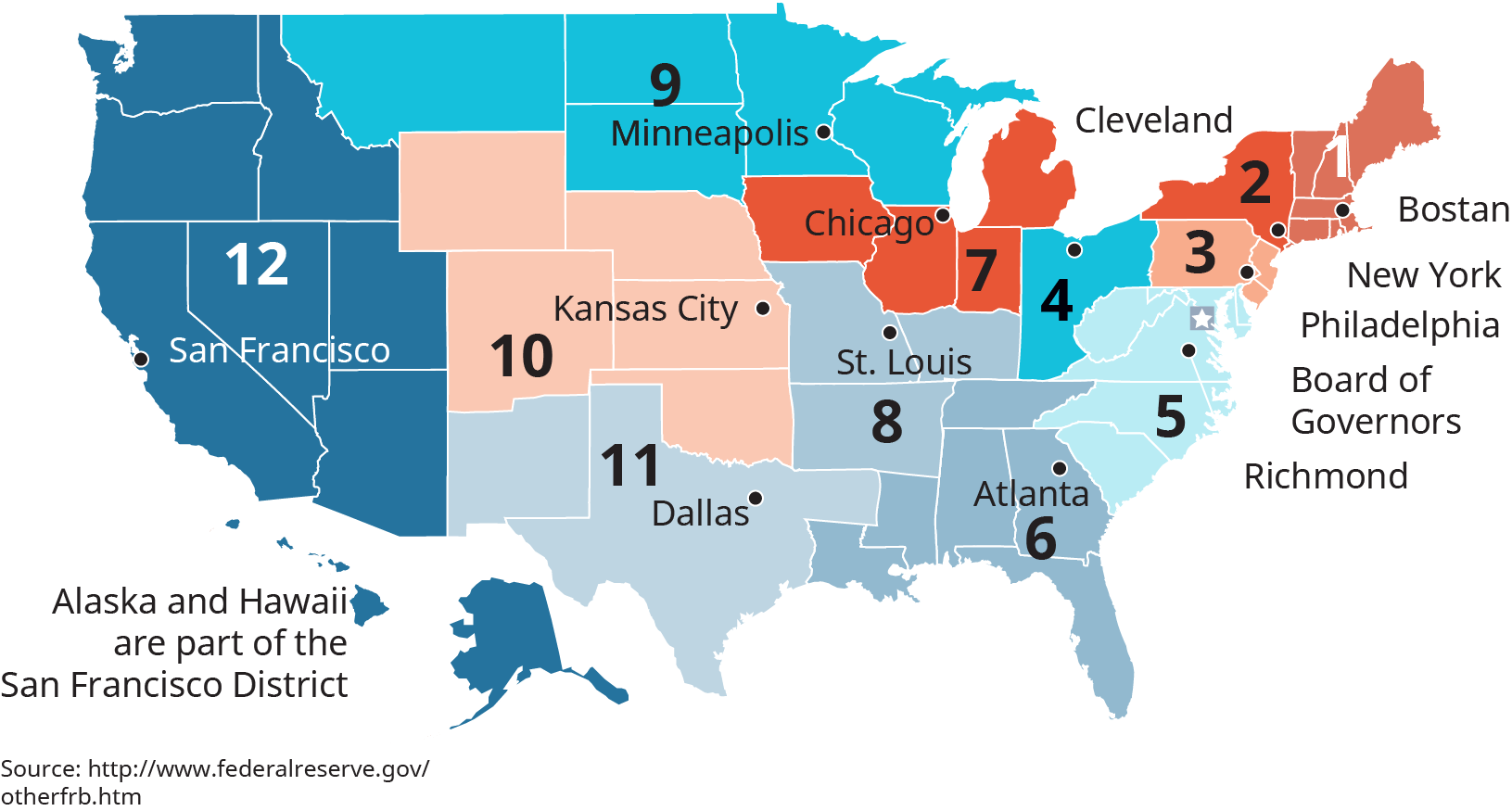 The most important function of the Federal Reserve System is carrying out monetary policy. The Federal Open Market Committee (FOMC) is the Fed policy-making body that meets eight times a year to make monetary policy decisions. It uses its power to change the money supply in order to control inflation and interest rates, increase employment, and influence economic activity. Three tools used by the Federal Reserve System in managing the money supply are open market operations, reserve requirements, and the discount rate. (Figure) summarizes the short-term effects of these tools on the economy.

The time between when the check is written and when the funds are deducted from the check writer’s account provides float. Float benefits the check writer by allowing it to retain the funds until the check clears—that is, when the funds are actually withdrawn from its accounts. Businesses open accounts at banks around the country that are known to have long check-clearing times. By “playing the float,” firms can keep their funds invested for several extra days, thus earning more money. To reduce this practice, in 1988 the Fed established maximum check-clearing times. However, as credit cards and other types of electronic payments have become more popular, the use of checks continues to decline. Responding to this decline, the Federal Reserve scaled back its check-processing facilities over the past decade. Current estimates suggest that the number of check payments has declined by two billion annually over the last couple of years and will continue to do so as more people use online banking and other electronic payment systems.

Much has been written over the past decade about the global financial crisis that occurred between 2007 and 2009. Some suggest that without the Fed’s intervention, the U.S. economy would have slipped deeper into a financial depression that could have lasted years. Several missteps by banks, mortgage lenders, and other financial institutions, which included approving consumers for home mortgages they could not afford and then packaging those mortgages into high-risk financial products sold to investors, put the U.S. economy into serious financial trouble.

In the early 2000s, the housing industry was booming. Mortgage lenders were signing up consumers for mortgages that “on paper” they could afford. In many instances, lenders told consumers that based on their credit rating and other financial data, they could easily take the next step and buy a bigger house or maybe a vacation home because of the availability of mortgage money and low interest rates. When the U.S. housing bubble burst in late 2007, the value of real estate plummeted, and many consumers struggled to pay mortgages on houses no longer worth the value they borrowed to buy the properties, leaving their real estate investments “underwater.” Millions of consumers simply walked away from their houses, letting them go into foreclosure while filing personal bankruptcy. At the same time, the overall economy was going into a recession, and millions of people lost their jobs as companies tightened their belts to try to survive the financial upheaval affecting the United States as well as other countries across the globe.

“Predatory Lending,” The Economist, https://www.economist.com, accessed September 7, 2017; Steve Denning, “Lest We Forget: Why We Had a Financial Crisis,” Forbes, http://www.forbes.com, November 22, 2011.

In addition, several leading financial investment firms, particularly those that managed and sold the high-risk, mortgage-backed financial products, failed quickly because they had not set aside enough money to cover the billions of dollars they lost on mortgages now going into default. For example, the venerable financial company Bear Stearns, which had been a successful business for more than 85 years, was eventually sold to JP Morgan for less than $10 a share, even after the Federal Reserve made more than $50 billion dollars available to help prop up financial institutions in trouble.

After the collapse of Bear Stearns and other firms such as Lehman Brothers and insurance giant AIG, the Fed set up a special loan program to stabilize the banking system and to keep the U.S. bond markets trading at a normal pace. It is estimated that the Federal Reserve made more than $9 trillion in loans to major banks and other financial firms during the two-year crisis—not to mention bailing out the auto industry and buying several other firms to keep the financial system afloat.

As a result of this financial meltdown, Congress passed legislation in 2010 to implement major regulations in the financial industry to prevent the future collapse of financial institutions, as well to put a check on abusive lending practices by banks and other firms. Among its provisions, the Dodd-Frank Wall Street Reform and Consumer Protection Act (known as Dodd-Frank) created an oversight council to monitor risks that affect the financial industry; requires banks to increase their cash reserves if the council feels the bank has too much risk in its current operations; prohibits banks from owning, investing, or sponsoring hedge funds, private equity funds, or other proprietary trading operations for profit; and set up a whistle-blower program to reward people who come forward to report security and other financial violations.

Another provision of Dodd-Frank legislation requires major U.S. banks to submit to annual stress tests conducted by the Federal Reserve. These annual checkups determine whether banks have enough capital to survive economic turbulence in the financial system and whether the institutions can identify and measure risk as part of their capital plan to pay dividends or buy back shares. In 2017, seven years after Dodd-Frank became law, all of the country’s major banks passed the annual examination.

James McBride, “The Role of the U.S. Federal Reserve,” Council on Foreign Relations, https://www.cfr.org, accessed September 7, 2017; Donna Borak, “For the First Time, All U.S. Banks Pass Fed’s Stress Tests,” CNN Money, http://money.cnn.com, June 28, 2017.
The Federal Reserve kept short-term interest rates close to 0 percent for more than seven years, from 2009 to December 2015, as a result of the global financial crisis. Now that the economy seems to be recovering at a slow but steady pace, the Fed began to raise the interest rate to 1.00–1.25 percent in mid-2017. What effect do higher interest rates have on the U.S. economy? (Credit: ./ Pexels/ CC0 License/✓ Free for personal and commercial use/✓ No attribution required)

The Federal Reserve System (the Fed) is an independent government agency that performs four main functions: carrying out monetary policy, setting rules on credit, distributing currency, and making check clearing easier. The three tools it uses in managing the money supply are open market operations, reserve requirements, and the discount rate. The Fed played a major role in keeping the U.S. financial system solvent during the financial crisis of 2007–2009 by making more than $9 trillion available in loans to major banks and other financial firms, in addition to bailing out the auto industry and other companies and supporting congressional passage of Dodd-Frank federal legislation.

discount rate
The interest rate that the Federal Reserve charges its member banks.

Federal Reserve System (Fed)
The central bank of the United States; consists of 12 district banks, each located in a major U.S. city.

open market operations
The purchase or sale of U.S. government bonds by the Federal Reserve to stimulate or slow down the economy.

reserve requirement
Requires banks that are members of the Federal Reserve System to hold some of their deposits in cash in their vaults or in an account at a district bank.