Businesses do not operate in a vacuum but rather in a dynamic environment that has a direct influence on how they operate and whether they will achieve their objectives. This external business environment is composed of numerous outside organizations and forces that we can group into seven key subenvironments, as (Figure) illustrates: economic, political and legal, demographic, social, competitive, global, and technological. Each of these sectors creates a unique set of challenges and opportunities for businesses.

Business owners and managers have a great deal of control over the internal environment of business, which covers day-to-day decisions. They choose the supplies they purchase, which employees they hire, the products they sell, and where they sell those products. They use their skills and resources to create goods and services that will satisfy existing and prospective customers. However, the external environmental conditions that affect a business are generally beyond the control of management and change constantly. To compete successfully, business owners and managers must continuously study the environment and adapt their businesses accordingly.

Other forces, such as natural disasters, can also have a major impact on businesses. While still in the rebuilding stage after Hurricane Katrina hit in 2005, the U.S. Gulf Coast suffered another disaster in April 2010 as a result of an explosion on the Deepwater Horizon oil-rig, which killed 11 workers and sent more than 3 million barrels of oil into the Gulf of Mexico. This event, which played out for more than 87 days, severely affected the environment, businesses, tourism, and people’s livelihoods. Global oil conglomerate BP, which was responsible for the oil spill, has spent more than $60 billion in response to the disaster and cleanup. Seven years after the explosion, tourism and other businesses are slowly recovering, although scientists are not certain about the long-term environmental consequences of the oil spill. 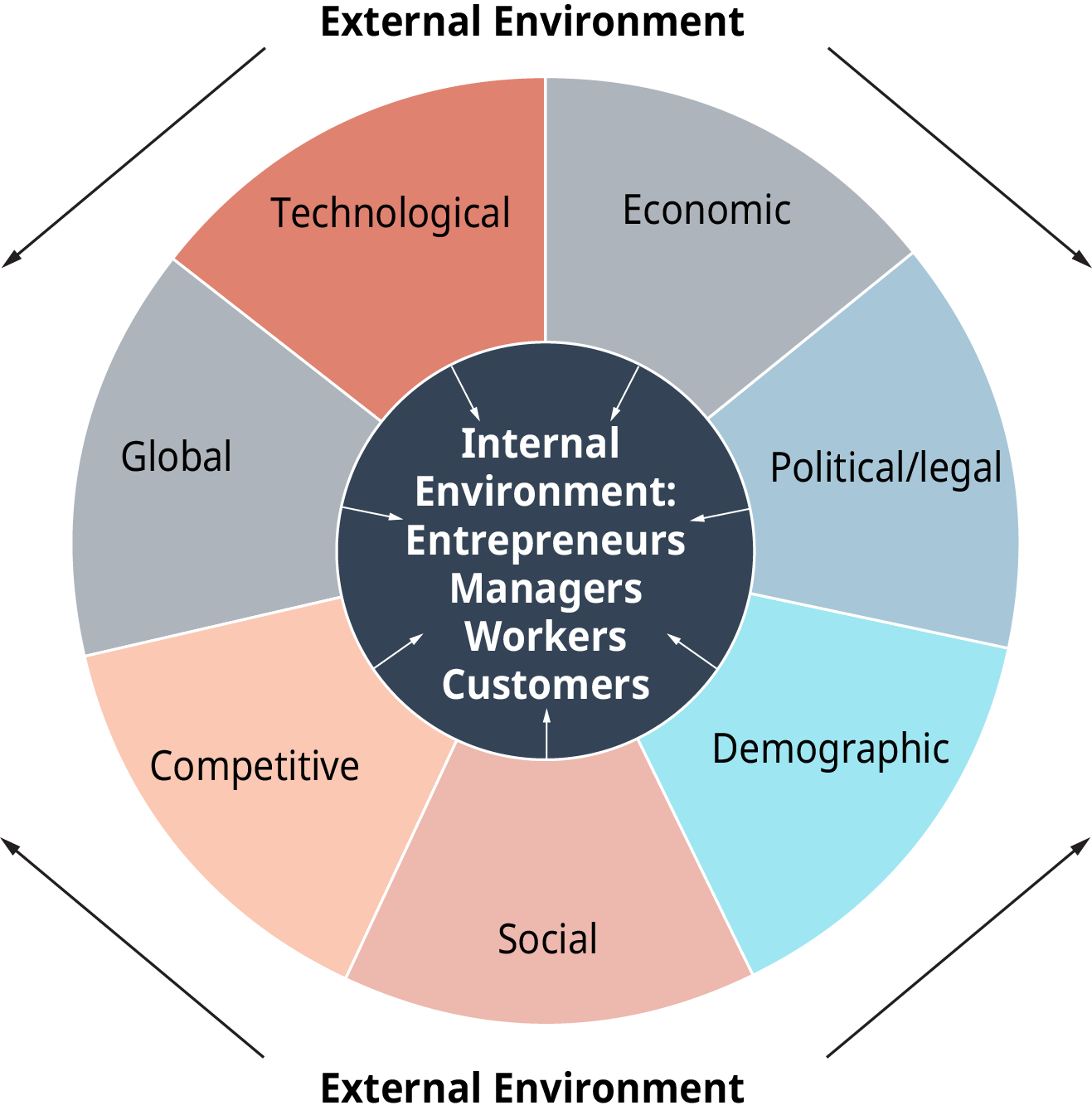 No one business is large or powerful enough to create major changes in the external environment. Thus, managers are primarily adapters to, rather than agents of, change. Global competition is basically an uncontrollable element in the external environment. In some situations, however, a firm can influence external events through its strategies. For example, major U.S. pharmaceutical companies have been successful in getting the Food and Drug Administration (FDA) to speed up the approval process for new drugs.

In recent years, the five largest companies in the S&P Index—Google, Facebook, Amazon, Microsoft, and Apple—have spent close to $50 million on lobbying activities in the nation’s capital in an effort to help policy makers understand the tech industry and the importance of innovation and an “open” internet.

This category is one of the most important external influences on businesses. Fluctuations in the level of economic activity create business cycles that affect businesses and individuals in many ways. When the economy is growing, for example, unemployment rates are low, and income levels rise. Inflation and interest rates are other areas that change according to economic activity. Through the policies it sets, such as taxes and interest rate levels, a government attempts to stimulate or curtail the level of economic activity. In addition, the forces of supply and demand determine how prices and quantities of goods and services behave in a free market.

The political climate of a country is another critical factor for managers to consider in day-to-day business operations. The amount of government activity, the types of laws it passes, and the general political stability of a government are three components of political climate. For example, a multinational company such as General Electric will evaluate the political climate of a country before deciding to locate a plant there. Is the government stable, or might a coup disrupt the country? How restrictive are the regulations for foreign businesses, including foreign ownership of business property and taxation? Import tariffs, quotas, and export restrictions also must be taken into account.

In the United States, laws passed by Congress and the many regulatory agencies cover such areas as competition, minimum wages, environmental protection, worker safety, and copyrights and patents. For example, Congress passed the Telecommunications Act of 1996 to deregulate the telecommunications industry. As a result, competition increased and new opportunities arose as traditional boundaries between service providers blurred. Today the dramatic growth in mobile technology has changed the focus of telecommunications, which now faces challenges related to broadband access and speed, content streaming, and much-needed improvements in network infrastructure to address ever-increasing data transmissions.

Federal agencies play a significant role in business operations. When Pfizer wants to bring a new medication for heart disease to market, it must follow the procedures set by the Food and Drug Administration for testing and clinical trials and secure FDA approval. Before issuing stock, Pfizer must register the securities with the Securities and Exchange Commission. The Federal Trade Commission will penalize Pfizer if its advertisements promoting the drug’s benefits are misleading. These are just a few ways the political and legal environment affect business decisions.

Demographic factors are an uncontrollable factor in the business environment and extremely important to managers. Demography is the study of people’s vital statistics, such as their age, gender, race and ethnicity, and location. Demographics help companies define the markets for their products and also determine the size and composition of the workforce. You’ll encounter demographics as you continue your study of business.

Demographics are at the heart of many business decisions. Businesses today must deal with the unique shopping preferences of different generations, which each require marketing approaches and goods and services targeted to their needs. For example, the more than 75 million members of the millennial generation were born between 1981 and 1997. In 2017 they surpassed baby boomers as America’s largest generation.

The marketing impact of millennials continues to be immense. These are technologically savvy and prosperous young people, with hundreds of billions of dollars to spend. And spend they do—freely, even though they haven’t yet reached their peak income and spending years.

Ashley Lutz, “Everything You Know about Millennial Spending Is about to Change,” Business Insider, http://www.businessinsider.com, October 1, 2016.

Other age groups, such as Generation X—people born between 1965 and 1980—and the baby boomers—born between 1946 and 1964—have their own spending patterns. Many boomers nearing retirement have money and are willing to spend it on their health, their comforts, leisure pursuits, and cars. As the population ages, businesses are offering more products that appeal to middle-aged and senior markets.

Companies recognize the value of hiring a diverse workforce that reflects our society. Minorities’ buying power has increased significantly as well, and companies are developing products and marketing campaigns that target different ethnic groups.

Social factors—our attitudes, values, ethics, and lifestyles—influence what, how, where, and when people purchase products or services. They are difficult to predict, define, and measure because they can be very subjective. They also change as people move through different life stages. People of all ages have a broader range of interests, defying traditional consumer profiles. They also experience a “poverty of time” and seek ways to gain more control over their time. Changing roles have brought more women into the workforce. This development is increasing family incomes, heightening demand for time-saving goods and services, changing family shopping patterns, and impacting individuals’ ability to achieve a work-life balance. In addition, a renewed emphasis on ethical behavior within organizations at all levels of the company has managers and employees alike searching for the right approach when it comes to gender inequality, sexual harassment, and other social behaviors that impact the potential for a business’s continued success.

In an industry driven by deadlines and details, it’s hard to imagine striking a balance between work and everyday life for full-time employees and seasonal staff. Fortunately, the management team at H&R Block not only believes in maintaining a strong culture, it also tries to offer flexibility to its more than 70,000 employees and seasonal workers in 12,000 retail offices worldwide.

According to Paul Wolfe, Indeed’s senior vice president of human resources, empathy on the part of organizations is a key factor in helping employees achieve balance. Wolfe says companies that demonstrate empathy and work diligently to provide personal time for all employees tend to take the top spots on the work-life balance list. “Comments we have seen from employee reviews for these companies indicate ‘fair’ and ‘flexible work environments,’” he says. Surprisingly, none of the tech companies known for their generous work perks made the top 20 list in 2017.

In this 24/7 world, when no one is far from a text or tweet, finding time for both family and work can be difficult, especially in the tax services industry, which is so schedule driven for a good part of the year. Making a commitment to help workers achieve a healthy work-life balance not only helps its employees, but it also helps H&R Block retain workers in a tight labor market where individuals continue to have choices when it comes to where and for whom they want to work.

The application of technology can stimulate growth under capitalism or any other economic system. Technology is the application of science and engineering skills and knowledge to solve production and organizational problems. New equipment and software that improve productivity and reduce costs can be among a company’s most valuable assets. Productivity is the amount of goods and services one worker can produce. Our ability as a nation to maintain and build wealth depends in large part on the speed and effectiveness with which we use technology—to invent and adapt more efficient equipment to improve manufacturing productivity, to develop new products, and to process information and make it instantly available across the organization and to suppliers and customers.

Many U.S. businesses, large and small, use technology to create change, improve efficiencies, and streamline operations. For example, advances in cloud computing provide businesses with the ability to access and store data without running applications or programs housed on a physical computer or server in their offices. Such applications and programs can now be accessed through the internet. Mobile technology allows businesses to communicate with employees, customers, suppliers, and others at the swipe of a tablet or smartphone screen. Robots help businesses automate repetitive tasks that free up workers to focus on more knowledge-based tasks critical to business operations.

The external business environment consists of economic, political and legal, demographic, social, competitive, global, and technological sectors. Managers must understand how the environment is changing and the impact of those changes on the business. When economic activity is strong, unemployment rates are low, and income levels rise. The political environment is shaped by the amount of government intervention in business affairs, the types of laws it passes to regulate both domestic and foreign businesses, and the general political stability of a government. Demographics, or the study of people’s vital statistics, are at the heart of many business decisions. Businesses today must deal with the unique preferences of different generations, each of which requires different marketing approaches and different goods and services. The population is becoming increasingly diverse: currently minorities represent more than 38 percent of the total U.S. population, and that number will continue to increase over the next several decades. Minorities’ buying power has increased significantly as well, and companies are developing products and marketing campaigns that target different ethnic groups. Social factors—our attitudes, values, and lifestyles—influence what, how, where, and when people purchase products. They are difficult to predict, define, and measure because they can be very subjective. They also change as people move through different life stages.

demography
The study of people’s vital statistics, such as their age, gender, race and ethnicity, and location.

productivity
The amount of goods and services one worker can produce.

technology
The application of science and engineering skills and knowledge to solve production and organizational problems.