One might argue that the best way to protect workers and the domestic economy is to stop trade with other nations. Then the whole circular flow of inputs and outputs would stay within our borders. But if we decided to do that, how would we get resources like cobalt and coffee beans? The United States simply can’t produce some things, and it can’t manufacture some products, such as steel and most clothing, at the low costs we’re used to. The fact is that nations—like people—are good at producing different things: you may be better at balancing a ledger than repairing a car. In that case you benefit by “exporting” your bookkeeping services and “importing” the car repairs you need from a good mechanic. Economists refer to specialization like this as advantage.

Even if the United States had an absolute advantage in both coffee and air traffic control systems, it should still specialize and engage in trade. Why? The reason is the principle of comparative advantage, which says that each country should specialize in the products that it can produce most readily and cheaply and trade those products for goods that foreign countries can produce most readily and cheaply. This specialization ensures greater product availability and lower prices.

Thus, comparative advantage acts as a stimulus to trade. When nations allow their citizens to trade whatever goods and services they choose without government regulation, free trade exists. Free trade is the policy of permitting the people and businesses of a country to buy and sell where they please without restrictions. The opposite of free trade is protectionism, in which a nation protects its home industries from outside competition by establishing artificial barriers such as tariffs and quotas. In the next section, we’ll look at the various barriers, some natural and some created by governments, that restrict free trade.

The Fear of Trade and Globalization

The continued protests during meetings of the World Trade Organization and the protests during the convocations of the World Bank and the International Monetary Fund (the three organizations are discussed later in the chapter) show that many people fear world trade and globalization. What do they fear? The negatives of global trade are as follows:

Sending domestic jobs to another country is called outsourcing, a topic you can explore in more depth. Many U.S. companies, such as Dell, IBM, and AT&T, have set up call service centers in India, the Philippines, and other countries. Now even engineering and research and development jobs are being outsourced. Outsourcing and “American jobs” were a big part of the 2016 presidential election with Carrier’s plan to close a plant in Indianapolis and open a new plant in Mexico. While intervention by President Trump did lead to 800 jobs remaining in Indianapolis, Carrier informed the state of Indiana that it will cut 632 workers from its Indianapolis factory. The manufacturing jobs will move to Monterrey, Mexico, where the minimum wage is $3.90 per day.

Danielle Paquette, “Trump Said He Would Save Jobs at Carrier. The Layoffs Start July 20,” The Washington Post, https://www.washingtonpost.com, May 24, 2017.
Anti-globalization groups oppose America’s free-trade stance, arguing that corporate interests are hurting the U.S. economy and usurping the power of the American people. The recent protests at the G20 meetings in Hamburg, Germany, expressed anti-free-trade sentiment, supporting the idea that multinational corporations wield too much power. Are fears expressed by anti-globalization activists and nationalists justified? (Credit: fiction of reality/ Flickr/ Attribution 2.0 Generic (CC BY 2.0)) 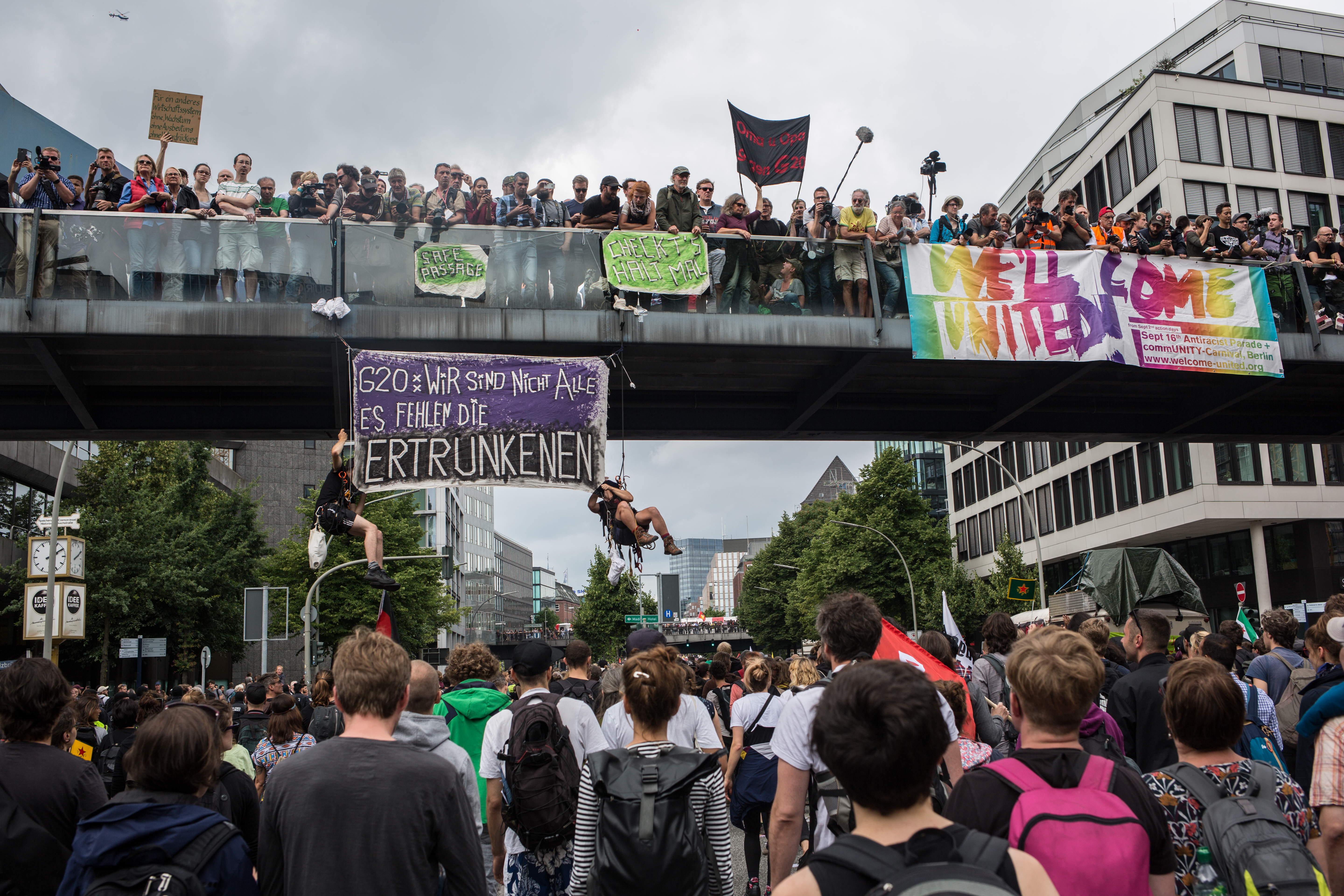 So is outsourcing good or bad? If you happen to lose your job, it’s obviously bad for you. However, some economists say it leads to cheaper goods and services for U.S. consumers because costs are lower. Also, it should stimulate exports to fast-growing countries. No one knows how many jobs will be lost to outsourcing in coming years. According to estimates, almost 2.4 million U.S. jobs were outsourced in 2015.

A closer look reveals that globalization has been the engine that creates jobs and wealth. Benefits of global trade include the following:

Nations trade because they gain by doing so. The principle of comparative advantage states that each country should specialize in the goods it can produce most readily and cheaply and trade them for those that other countries can produce most readily and cheaply. The result is more goods at lower prices than if each country produced by itself everything it needed. Free trade allows trade among nations without government restrictions.

absolute advantage
The situation when a country can produce and sell a product at a lower cost than any other country or when it is the only country that can provide the product.

free trade
The policy of permitting the people and businesses of a country to buy and sell where they please without restrictions.

G20
Informal group that brings together 19 countries and the European Union—the 20 leading economies in the world.

protectionism
The policy of protecting home industries from outside competition by establishing artificial barriers such as tariffs and quotas.