Now that we have both a conceptual understanding of a limit and the practical ability to compute limits, we have established the foundation for our study of calculus, the branch of mathematics in which we compute derivatives and integrals. Most mathematicians and historians agree that calculus was developed independently by the Englishman Isaac Newton (1643–1727) and the German Gottfried Leibniz (1646–1716), whose images appear in (Figure). When we credit Newton and Leibniz with developing calculus, we are really referring to the fact that Newton and Leibniz were the first to understand the relationship between the derivative and the integral. Both mathematicians benefited from the work of predecessors, such as Barrow, Fermat, and Cavalieri. The initial relationship between the two mathematicians appears to have been amicable; however, in later years a bitter controversy erupted over whose work took precedence. Although it seems likely that Newton did, indeed, arrive at the ideas behind calculus first, we are indebted to Leibniz for the notation that we commonly use today.

We begin our study of calculus by revisiting the notion of secant lines and tangent lines. Recall that we used the slope of a secant line to a function at a point

to estimate the rate of change, or the rate at which one variable changes in relation to another variable. We can obtain the slope of the secant by choosing a value of

and drawing a line through the points

, as shown in (Figure). The slope of this line is given by an equation in the form of a difference quotient:

by using this equation and replacing

is a value close to

. We can then calculate the slope of the line through the points

. In this case, we find the secant line has a slope given by the following difference quotient with increment

be a function defined on an interval

is a difference quotient.

is chosen so that

is a difference quotient with increment

View several Java applets on the development of the derivative.

In (Figure)(a) we see that, as the values of

, the slopes of the secant lines provide better estimates of the rate of change of the function at

. Furthermore, the secant lines themselves approach the tangent line to the function at

, which represents the limit of the secant lines. Similarly, (Figure)(b) shows that as the values of

is the rate of change of the function at

You can use this site to explore graphs to see if they have a tangent line at a point.

In (Figure) we show the graph of

and its tangent line at

in a series of tighter intervals about

itself appears to be locally linear in the immediate vicinity of

Formally we may define the tangent line to the graph of a function as follows.

be a function defined in an open interval containing

. The tangent line to

is the line passing through the point

Equivalently, we may define the tangent line to

to be the line passing through the point

Find the equation of the line tangent to the graph of

First find the slope of the tangent line. In this example, use (Figure).

Next, find a point on the tangent line. Since the line is tangent to the graph of

, it passes through the point

, so the tangent line passes through the point

Using the point-slope equation of the line with the slope

, we obtain the line

and its tangent line at

The Slope of a Tangent Line Revisited

The steps are very similar to (Figure). See (Figure) for the definition.

We obtained the same value for the slope of the tangent line by using the other definition, demonstrating that the formulas can be interchanged.

Finding the Equation of a Tangent Line

Find the equation of the line tangent to the graph of

We now know that the slope of the tangent line is

. To find the equation of the tangent line, we also need a point on the line. We know that

. Since the tangent line passes through the point

Find the slope of the line tangent to the graph of

Use either (Figure) or (Figure). Multiply the numerator and the denominator by a conjugate.

The Derivative of a Function at a Point

The type of limit we compute in order to find the slope of the line tangent to a function at a point occurs in many applications across many disciplines. These applications include velocity and acceleration in physics, marginal profit functions in business, and growth rates in biology. This limit occurs so frequently that we give this value a special name: the derivative. The process of finding a derivative is called differentiation.

be a function defined in an open interval containing

. The derivative of the function

Alternatively, we may also define the derivative of

, use a table to estimate

Create a table using values of

just below 3 and just above 3.

After examining the table, we see that a good estimate is

, use a table to estimate

Substitute the given function and value directly into the equation.

Using this equation, we can substitute two values of the function into the equation, and we should get the same value as in (Figure).

The results are the same whether we use (Figure) or (Figure).

Velocities and Rates of Change

Now that we can evaluate a derivative, we can use it in velocity applications. Recall that if

is the position of an object moving along a coordinate axis, the average velocity of the object over a time interval

is given by the difference quotient

As the values of

approach the value we call the instantaneous velocity at

. That is, instantaneous velocity at

whose position at time

is given by the function

. The slope of the secant line (shown in green) is the average velocity of the object over the time interval

We can use (Figure) to calculate the instantaneous velocity, or we can estimate the velocity of a moving object by using a table of values. We can then confirm the estimate by using (Figure).

A lead weight on a spring is oscillating up and down. Its position at time

with respect to a fixed horizontal line is given by

((Figure)). Use a table of values to estimate

. Check the estimate by using (Figure).

We can estimate the instantaneous velocity at

by computing a table of average velocities using values of

approaching 0, as shown in (Figure).

By using (Figure), we can see that

A rock is dropped from a height of 64 feet. Its height above ground at time

seconds later is given by

. Find its instantaneous velocity 1 second after it is dropped, using (Figure).

. Follow the earlier examples of the derivative using (Figure).

The instantaneous rate of change of a function

ft/s. We can summarize the information in a table.

approaches 19.96, as shown in the following table.

The rate at which the car is accelerating is decreasing as its velocity approaches 229.9 mph (337.19 ft/s).

Rate of Change of Temperature

during the night, and rises back to

by 7 a.m. the next morning. Suppose that the temperature in the house is given by

is the number of hours past 9 p.m. Find the instantaneous rate of change of the temperature at midnight.

Since midnight is 3 hours past 9 p.m., we want to compute

The instantaneous rate of change of the temperature at midnight is

Rate of Change of Profit

A toy company can sell

electronic gaming systems at a price of

dollars per gaming system. The cost of manufacturing

systems is given by

dollars. Find the rate of change of profit when 10,000 games are produced. Should the toy company increase or decrease production?

is the revenue obtained from the sale of

games. Since the company can sell

Therefore, evaluating the rate of change of profit gives

Since the rate of change of profit

, the company should increase production.

dollars per scone is

, the rate of change of profit when the price is

and decide whether or not the coffee shop should consider raising or lowering its prices on scones.

Use (Figure) for a guide.

For the following exercises, use (Figure) to find the slope of the secant line between the values

For the following functions,

For the following functions

For the following exercises, given the function

(Round to 6 decimal places.)

(Round to 4 decimal places.)

For the following position functions

, an object is moving along a straight line, where

is in seconds and

is in meters. Find

39. Use the following graph to evaluate a. 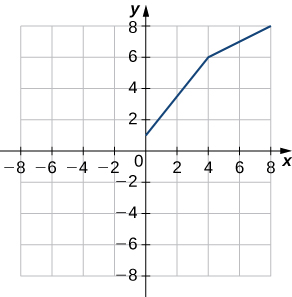 40. Use the following graph to evaluate a. 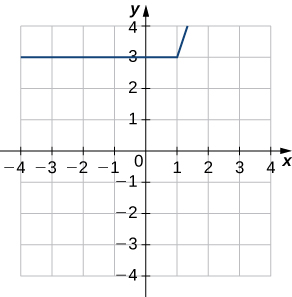 For the following exercises, use the limit definition of derivative to show that the derivative does not exist at

for each of the given functions.

45. [T] The position in feet of a race car along a straight track after

seconds is modeled by the function

46. [T] The distance in feet that a ball rolls down an incline is modeled by the function

is seconds after the ball begins rolling.

47. Two vehicles start out traveling side by side along a straight road. Their position functions, shown in the following graph, are given by

is measured in feet and

is measured in seconds. 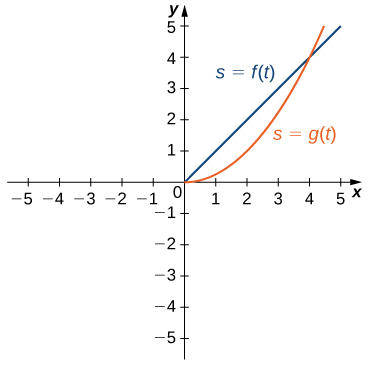 a. The vehicle represented by

, because it has traveled 2 feet, whereas

has traveled 1 foot.
b. The velocity of

is constant at 1 ft/s, while the velocity of

is approximately 2 ft/s.
c. The vehicle represented by

, with a velocity of approximately 4 ft/s.
d. Both have traveled 4 feet in 4 seconds.

, in hundreds of dollars, to produce

jars of mayonnaise is given by 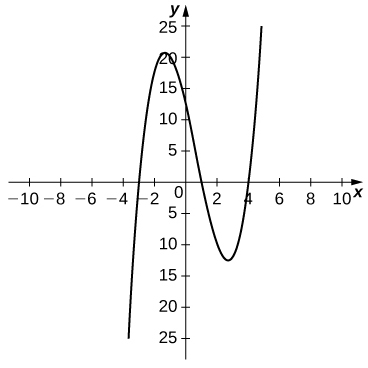 miles. Suppose the vehicle gets 30 mpg.

. The rate of gas consumption in gallons per mile that the vehicle is achieving after having traveled 100 miles. 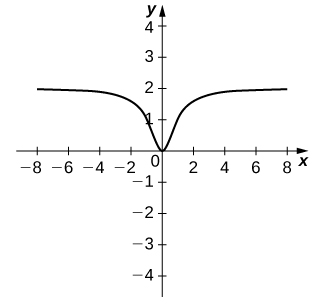 derivative
the slope of the tangent line to a function at a point, calculated by taking the limit of the difference quotient, is the derivative

difference quotient
of a function

differentiation
the process of taking a derivative

, or the derivative of the function at

3.1 Defining the Derivative by OSCRiceUniversity is licensed under a Creative Commons Attribution-NonCommercial-ShareAlike 4.0 International License, except where otherwise noted.