Many systems exhibit exponential growth. These systems follow a model of the form

is a positive constant, called the growth constant. Notice that in an exponential growth model, we have

Systems that exhibit exponential growth increase according to the mathematical model

is a constant, called the growth constant.

minutes), the population is 10 times its original size!

Note that we are using a continuous function to model what is inherently discrete behavior. At any given time, the real-world population contains a whole number of bacteria, although the model takes on noninteger values. When using exponential growth models, we must always be careful to interpret the function values in the context of the phenomenon we are modeling.

Consider the population of bacteria described earlier. This population grows according to the function

is measured in minutes. How many bacteria are present in the population after 5 hours

minutes)? When does the population reach 100,000 bacteria?

There are 80,686 bacteria in the population after 5 hours.

To find when the population reaches 100,000 bacteria, we solve the equation

Consider a population of bacteria that grows according to the function

Let’s now turn our attention to a financial application: compound interest. Interest that is not compounded is called simple interest. Simple interest is paid once, at the end of the specified time period (usually 1 year). So, if we put

in a savings account earning 2% simple interest per year, then at the end of the year we have

but also on the interest earned during the first half of the year. Mathematically speaking, at the end of the year, we have

Similarly, if the interest is compounded every 4 months, we have

and if the interest is compounded daily

times per year), we have

If we extend this concept, so that the interest is compounded continuously, after

Now let’s manipulate this expression so that we have an exponential growth function. Recall that the number

can be expressed as a limit:

Based on this, we want the expression inside the parentheses to have the form

as well. Then we get

We recognize the limit inside the brackets as the number

years is given by

Generalizing this concept, we see that if a bank account with an initial balance of

earns interest at a rate of

compounded continuously, then the balance of the account after

A 25-year-old student is offered an opportunity to invest some money in a retirement account that pays 5% annual interest compounded continuously. How much does the student need to invest today to have

million when she retires at age

What if she could earn 6% annual interest compounded continuously instead?

If, instead, she is able to earn

then the equation becomes

In this case, she needs to invest only

The fact that the interest is compounded continuously greatly magnifies the effect of the 1% increase in interest rate.

Suppose instead of investing at age

the student waits until age 35. How much would she have to invest at

At 5% interest, she must invest

At 6% interest, she must invest

If a quantity grows exponentially, the time it takes for the quantity to double remains constant. In other words, it takes the same amount of time for a population of bacteria to grow from 100 to 200 bacteria as it does to grow from 10,000 to 20,000 bacteria. This time is called the doubling time. To calculate the doubling time, we want to know when the quantity reaches twice its original size. So we have

If a quantity grows exponentially, the doubling time is the amount of time it takes the quantity to double. It is given by

Assume a population of fish grows exponentially. A pond is stocked initially with 500 fish. After 6 months, there are 1000 fish in the pond. The owner will allow his friends and neighbors to fish on his pond after the fish population reaches 10,000. When will the owner’s friends be allowed to fish?

We know it takes the population of fish 6 months to double in size. So, if

represents time in months, by the doubling-time formula, we have

Thus, the population is given by

To figure out when the population reaches 10,000 fish, we must solve the following equation:

The owner’s friends have to wait 25.93 months (a little more than 2 years) to fish in the pond.

Suppose it takes 9 months for the fish population in (Figure) to reach 1000 fish. Under these circumstances, how long do the owner’s friends have to wait?

Exponential functions can also be used to model populations that shrink (from disease, for example), or chemical compounds that break down over time. We say that such systems exhibit exponential decay, rather than exponential growth. The model is nearly the same, except there is a negative sign in the exponent. Thus, for some positive constant

Systems that exhibit exponential decay behave according to the model

is a constant, called the decay constant.

The following figure shows a graph of a representative exponential decay function.

represents the temperature of the object and

represents the ambient temperature in a room, then

Note that this is not quite the right model for exponential decay. We want the derivative to be proportional to the function, and this expression has the additional

term. Fortunately, we can make a change of variables that resolves this issue. Let

and our equation becomes

From our previous work, we know this relationship between

and its derivative leads to exponential decay. Thus,

and we see that

represents the initial temperature. Let’s apply this formula in the following example.

According to experienced baristas, the optimal temperature to serve coffee is between

Suppose coffee is poured at a temperature of

and after 2 minutes in a

room it has cooled to 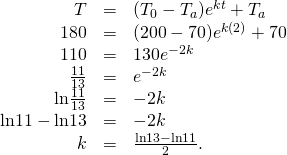 Then, the model is

The coffee can be served about 2.5 minutes after it is poured. The coffee reaches

The coffee is too cold to be served about 5 minutes after it is poured.

Suppose the room is warmer

and, after 2 minutes, the coffee has cooled only to

Note: This is the same expression we came up with for doubling time.

If a quantity decays exponentially, the half-life is the amount of time it takes the quantity to be reduced by half. It is given by

One of the most common applications of an exponential decay model is carbon dating.

decays (emits a radioactive particle) at a regular and consistent exponential rate. Therefore, if we know how much carbon was originally present in an object and how much carbon remains, we can determine the age of the object. The half-life of

is approximately 5730 years—meaning, after that many years, half the material has converted from the original

to the new nonradioactive

today, how much is left in 50 years? If an artifact that originally contained 100 g of carbon now contains 10 g of carbon, how old is it? Round the answer to the nearest hundred years.

So, the model says

To determine the age of the artifact, we must solve

how much is left after. years? If an artifact that originally contained 100 g of carbon now contains

of carbon, how old is it? Round the answer to the nearest hundred years.

True or False? If true, prove it. If false, find the true answer.

1. The doubling time for

pot of tea at room temperature

and an identical pot in the refrigerator

the tea in the refrigerator reaches a drinkable temperature

more than 5 minutes before the tea at room temperature.

For the following exercises, use

5. If a culture of bacteria doubles in 3 hours, how many hours does it take to multiply by

6. If bacteria increase by a factor of 10 in 10 hours, how many hours does it take to increase by

7. How old is a skull that contains one-fifth as much radiocarbon as a modern skull? Note that the half-life of radiocarbon is 5730 years.

8. If a relic contains 90% as much radiocarbon as new material, can it have come from the time of Christ (approximately 2000 years ago)? Note that the half-life of radiocarbon is 5730 years.

No. The relic is approximately 871 years old.

9. The population of Cairo grew from 5 million to 10 million in 20 years. Use an exponential model to find when the population was 8 million.

10. The populations of New York and Los Angeles are growing at 1% and 1.4% a year, respectively. Starting from 8 million (New York) and 6 million (Los Angeles), when are the populations equal?

11. Suppose the value of

in Japanese yen decreases at 2% per year. Starting from

12. The effect of advertising decays exponentially. If 40% of the population remembers a new product after 3 days, how long will 20% remember it?

15. If a bank offers annual interest of 7.5% or continuous interest of

which has a better annual yield?

16. What continuous interest rate has the same yield as an annual rate of

at 8% annual interest, how many years can you withdraw

(starting after the first year) without running out of money?

in 20 years for college tuition for your child. If interest is a continuous

how much do you need to invest initially?

19. You are cooling a turkey that was taken out of the oven with an internal temperature of

After 10 minutes of resting the turkey in a

apartment, the temperature has reached

What is the temperature of the turkey 20 minutes after taking it out of the oven?

20. You are trying to thaw some vegetables that are at a temperature of

To thaw vegetables safely, you must put them in the refrigerator, which has an ambient temperature of

21. You are an archaeologist and are given a bone that is claimed to be from a Tyrannosaurus Rex. You know these dinosaurs lived during the Cretaceous Era

22. The spent fuel of a nuclear reactor contains plutonium-239, which has a half-life of 24,000 years. If 1 barrel containing 10kg of plutonium-239 is sealed, how many years must pass until only

For the next set of exercises, use the following table, which features the world population by decade.

23. [T] The best-fit exponential curve to the data of the form

Use a graphing calculator to graph the data and the exponential curve together.

24. [T] Find and graph the derivative

of your equation. Where is it increasing and what is the meaning of this increase?

The population is always increasing.

25. [T] Find and graph the second derivative of your equation. Where is it increasing and what is the meaning of this increase?

26. [T] Find the predicted date when the population reaches 10 billion. Using your previous answers about the first and second derivatives, explain why exponential growth is unsuccessful in predicting the future.

The population reaches 10 billion people in 2027.

For the next set of exercises, use the following table, which shows the population of San Francisco during the 19th century.

27. [T] The best-fit exponential curve to the data of the form

Use a graphing calculator to graph the data and the exponential curve together.

28. [T] Find and graph the derivative

of your equation. Where is it increasing? What is the meaning of this increase? Is there a value where the increase is maximal?

The population is always increasing.

29. [T] Find and graph the second derivative of your equation. Where is it increasing? What is the meaning of this increase?

doubling time
if a quantity grows exponentially, the doubling time is the amount of time it takes the quantity to double, and is given by

half-life
if a quantity decays exponentially, the half-life is the amount of time it takes the quantity to be reduced by half. It is given by