In this section, we examine a powerful tool for evaluating limits. This tool, known as L’Hôpital’s rule, uses derivatives to calculate limits. With this rule, we will be able to evaluate many limits we have not yet been able to determine. Instead of relying on numerical evidence to conjecture that a limit exists, we will be able to show definitively that a limit exists and to determine its exact value.

L’Hôpital’s rule can be used to evaluate limits involving the quotient of two functions. Consider

However, what happens if

We call this one of the indeterminate forms, of type

without further analysis. We have seen examples of this earlier in the text. For example, consider

For the first of these examples, we can evaluate the limit by factoring the numerator and writing

we were able to show, using a geometric argument, that

Here we use a different technique for evaluating limits such as these. Not only does this technique provide an easier way to evaluate these limits, but also, and more important, it provides us with a way to evaluate many other limits that we could not calculate previously.

If we also assume that

Using these ideas, we conclude that

Note that the assumption that

can be loosened. We state L’Hôpital’s rule formally for the indeterminate form

Also note that the notation

does not mean we are actually dividing zero by zero. Rather, we are using the notation

to represent a quotient of limits, each of which is zero.

are differentiable functions over an open interval containing

This result also holds if we are considering one-sided limits, or if

are all continuous over an open interval containing

In that case, since 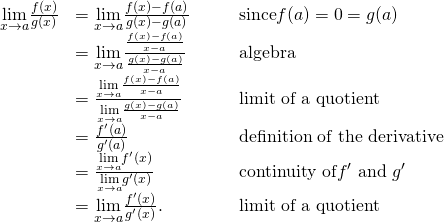 by considering the limit of the quotient of the derivatives

Evaluate each of the following limits by applying L’Hôpital’s rule.

Limits of this form are classified as indeterminate forms of type

Again, note that we are not actually dividing

is not a real number, that is impossible; rather,

is used to represent a quotient of limits, each of which is

are differentiable functions over an open interval containing

This result also holds if the limit is infinite, if

or the limit is one-sided.

Evaluate each of the following limits by applying L’Hôpital’s rule.

it is essential that the limit of

be of the form

When L’Hôpital’s Rule Does Not Apply

Show that the limit cannot be evaluated by applying L’Hôpital’s rule.

Because the limits of the numerator and denominator are not both zero and are not both infinite, we cannot apply L’Hôpital’s rule. If we try to do so, we get

At which point we would conclude erroneously that

We can conclude that

Explain why we cannot apply L’Hôpital’s rule to evaluate

Therefore, we cannot apply L’Hôpital’s rule. The limit of the quotient is

Determine the limits of the numerator and denominator separately.

However, we can also use L’Hôpital’s rule to help evaluate limits involving other indeterminate forms that arise when evaluating limits. The expressions

Suppose we want to evaluate

Since one term in the product is approaching zero but the other term is becoming arbitrarily large (in magnitude), anything can happen to the product. We use the notation

to denote the form that arises in this situation. The expression

be a positive integer and consider

However, the limit as

Here we consider another limit involving the indeterminate form

and show how to rewrite the function as a quotient to use L’Hôpital’s rule.

as a quotient to apply L’Hôpital’s rule. If we write

Therefore, we can apply L’Hôpital’s rule and obtain

Another type of indeterminate form is

be a positive integer and let

grows faster, or they grow at the same rate, as we see next, anything can happen in this limit. Since

to denote the form of this limit. As with our other indeterminate forms,

has no meaning on its own and we must do more analysis to determine the value of the limit. For example, suppose the exponent

On the other hand, if

Therefore, the limit cannot be determined by considering only

as a fraction to apply L’Hôpital’s rule.

By combining the fractions, we can write the function as a quotient. Since the least common denominator is

Therefore, we can apply L’Hôpital’s rule. Taking the derivatives of the numerator and the denominator, we have

Since the denominator is positive as

approaches zero from the right, we conclude that

Rewrite the difference of fractions as a single fraction.

Another type of indeterminate form that arises when evaluating limits involves exponents. The expressions

Since L’Hôpital’s rule applies to quotients, we use the natural logarithm function and its properties to reduce a problem evaluating a limit involving exponents to a related problem involving a limit of a quotient. For example, suppose we want to evaluate

and we arrive at the indeterminate form

can be handled similarly.) We proceed as follows. Let

is of the indeterminate form

in a form so that we can apply L’Hôpital’s rule. Suppose

Since the natural logarithm function is continuous, we conclude that

We need to evaluate

Since the natural logarithm function is continuous, we conclude that

and apply the natural logarithm to both sides of the equation.

we have the indeterminate form

To apply L’Hôpital’s rule, we need to rewrite

as a fraction. We could write

Let’s consider the first option. In this case, applying L’Hôpital’s rule, we would obtain

Unfortunately, we not only have another expression involving the indeterminate form

but the new limit is even more complicated to evaluate than the one with which we started. Instead, we try the second option. By writing

and applying L’Hôpital’s rule, we obtain

Using the fact that

we can rewrite the expression on the right-hand side as

and take the natural logarithm of both sides of the equation.

both approach infinity as

become sufficiently large, sometimes one function is growing more quickly than the other. For example,

both approach infinity as

However, as shown in the following table, the values of

are growing much faster than the values of

As a result, we say

is growing more rapidly than

On the other hand, for

although the values of

are always greater than the values of

is roughly three times the corresponding value of

as shown in the following table. In fact,

In this case, we say that

are growing at the same rate as

are two functions that approach infinity as

On the other hand, if there exists a constant

grow at the same rate as

Next we see how to use L’Hôpital’s rule to compare the growth rates of power, exponential, and logarithmic functions.

Comparing the Growth Rates of

For each of the following pairs of functions, use L’Hôpital’s rule to evaluate

Compare the growth rates of

Using the same ideas as in (Figure)a. it is not difficult to show that

In (Figure) and (Figure), we compare

Similarly, it is not difficult to show that

In (Figure) and (Figure), we compare

For the following exercises, evaluate the limit.

For the following exercises, evaluate the limits with either L’Hôpital’s rule or previously learned methods.

For the following exercises, use a calculator to graph the function and estimate the value of the limit, then use L’Hôpital’s rule to find the limit directly.

indeterminate forms
when evaluating a limit, the forms

are considered indeterminate because further analysis is required to determine whether the limit exists and, if so, what its value is

are differentiable functions over an interval

4.8 L’Hôpital’s Rule by OSCRiceUniversity is licensed under a Creative Commons Attribution-NonCommercial-ShareAlike 4.0 International License, except where otherwise noted.