In many areas of pure and applied mathematics, we are interested in finding solutions to an equation of the form

For most functions, however, it is difficult—if not impossible—to calculate their zeroes explicitly. In this section, we take a look at a technique that provides a very efficient way of approximating the zeroes of functions. This technique makes use of tangent line approximations and is behind the method used often by calculators and computers to find zeroes.

Consider the task of finding the solutions of

is the first-degree polynomial

then the solution of

is given by the formula

is the second-degree polynomial

can be found by using the quadratic formula. However, for polynomials of degree 3 or more, finding roots of

is a polynomial of degree 5 or greater, it is known that no such formulas exist. For example, consider the function

No formula exists that allows us to find the solutions of

Similar difficulties exist for nonpolynomial functions. For example, consider the task of finding solutions of

No simple formula exists for the solutions of this equation. In cases such as these, we can use Newton’s method to approximate the roots.

By sketching a graph of

we can estimate a root of

We then draw the tangent line to

this tangent line intersects the

-axis at some point

be the next approximation to the actual root. Typically,

to an actual root. Next we draw the tangent line to

this tangent line also intersects the

We continue in this way, deriving a list of approximations:

as shown in the following figure.

Now let’s look at how to calculate the approximations

is defined by letting

-intercept of the tangent line to

The equation of this tangent line is given by

-intercept of the tangent line to

Finding a Root of a Polynomial

Use Newton’s method to approximate a root of

has one root over the interval

(and a calculator that displays 10 digits), we obtain

To find the next approximation,

we use (Figure) with

and the value of

stored on the calculator. We find that

Continuing in this way, we obtain the following results:

We note that we obtained the same value for

Therefore, any subsequent application of Newton’s method will most likely give the same value for

let’s use Newton’s method to approximate the root of

This method can be modified to approximate the square root of any positive number.

Use Newton’s method to approximate

(We note that since

has a zero at

is a reasonable choice to approximate

From (Figure), we know that

Continuing in this way, we find that

Since we obtained the same value for

it is unlikely that the value

will change on any subsequent application of Newton’s method. We conclude that

Use Newton’s method to approximate

When using Newton’s method, each approximation after the initial guess is defined in terms of the previous approximation by using the same formula. In particular, by defining the function

we can rewrite (Figure) as

This type of process, where each

by repeating the same function, is an example of an iterative process. Shortly, we examine other iterative processes. First, let’s look at the reasons why Newton’s method could fail to find a root.

Show that the sequence

fails to approach a root of

In the next step,

which is over the interval

(see (Figure)). Fortunately, if we choose an initial approximation

closer to the actual root, we can avoid this situation.

and an initial number

This list of numbers may approach a finite number

gets larger, or it may not. In (Figure), we see an example of a function

and an initial guess

such that the resulting list of numbers approaches a finite value.

Finding a Limit for an Iterative Process

Make a conjecture about what happens to this list of numbers

is called a fixed point of 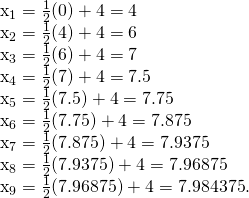 (Figure) provides a graphical argument that the values approach 8 as

Starting at the point

we draw a vertical line to the point

and then draw a vertical line connecting

Continuing in this way, we could create an infinite number of line segments. These line segments are trapped between the lines

The line segments get closer to the intersection point of these two lines, which occurs when

we conclude they intersect at

Make a conjecture about what happens to the list of numbers

Consider the point where the lines

(where the iterative process repeats a sequence of four values), 8-cycles, and so on.

Probably the best-known example of chaos is the Mandelbrot set (see (Figure)), named after Benoit Mandelbrot (1924–2010), who investigated its properties and helped popularize the field of chaos theory. The Mandelbrot set is usually generated by computer and shows fascinating details on enlargement, including self-replication of the set. Several colorized versions of the set have been shown in museums and can be found online and in popular books on the subject.

In this project we use the logistic map

as the function in our iterative process. The logistic map is a deceptively simple function; but, depending on the value of

the resulting iterative process displays some very interesting behavior. It can lead to fixed points, cycles, and even chaos.

then draw a vertical line to

(The first 100 iterations are not plotted.) The long-term behavior of this iterative process is an 8-cycle.

For the following exercises, write Newton’s formula as

For the following exercises, solve

which differs slightly from Newton’s method. Find a

that works and a

that fails to converge, with the exception of

For the following exercises, start at

For the following exercises, solve to four decimal places using Newton’s method and a computer or calculator. Choose any initial guess

that is not the exact root.

For the following exercises, use Newton’s method to find the fixed points of the function where

Newton’s method can be used to find maxima and minima of functions in addition to the roots. In this case apply Newton’s method to the derivative function

to find its roots, instead of the original function. For the following exercises, consider the formulation of the method.

31. To find candidates for maxima and minima, we need to find the critical points

Show that to solve for the critical points of a function

Newton’s method is given by

32. What additional restrictions are necessary on the function

to be twice continuously differentiable.

For the following exercises, use Newton’s method to find the location of the local minima and/or maxima of the following functions; round to three decimals.

There is no solution to the equation.

It enters a cycle.

For the following exercises, use the secant method, an alternative iterative method to Newton’s method. The formula is given by

49. Why would you use the secant method over Newton’s method? What are the necessary restrictions on

In the following exercises, consider Kepler’s equation regarding planetary orbits,

is the mean anomaly,

is eccentric anomaly, and

55. Use Newton’s method to solve for the eccentric anomaly

when the mean anomaly

and the eccentricity of the orbit

56. Use Newton’s method to solve for the eccentric anomaly

when the mean anomaly

and the eccentricity of the orbit

The following two exercises consider a bank investment. The initial investment is

After 25 years, the investment has tripled to

59. The cost for printing a book can be given by the equation

iterative process
process in which a list of numbers

is generated by starting with a number

each subsequent approximation is defined by the equation

4.9 Newton’s Method by OSCRiceUniversity is licensed under a Creative Commons Attribution-NonCommercial-ShareAlike 4.0 International License, except where otherwise noted.