In the previous section, we evaluated limits by looking at graphs or by constructing a table of values. In this section, we establish laws for calculating limits and learn how to apply these laws. In the Student Project at the end of this section, you have the opportunity to apply these limit laws to derive the formula for the area of a circle by adapting a method devised by the Greek mathematician Archimedes. We begin by restating two useful limit results from the previous section. These two results, together with the limit laws, serve as a foundation for calculating many limits.

Evaluating Limits with the Limit Laws

The first two limit laws were stated in (Figure) and we repeat them here. These basic results, together with the other limit laws, allow us to evaluate limits of many algebraic functions.

For any real number

Evaluate each of the following limits using (Figure).

We now take a look at the limit laws, the individual properties of limits. The proofs that these laws hold are omitted here.

are real numbers such that

be a constant. Then, each of the following statements holds:

for every positive integer

is odd and for

We now practice applying these limit laws to evaluate a limit.

Let’s apply the limit laws one step at a time to be sure we understand how they work. We need to keep in mind the requirement that, at each application of a limit law, the new limits must exist for the limit law to be applied.

To find this limit, we need to apply the limit laws several times. Again, we need to keep in mind that as we rewrite the limit in terms of other limits, each new limit must exist for the limit law to be applied.

. In each step, indicate the limit law applied.

Begin by applying the product law.

Limits of Polynomial and Rational Functions

By now you have probably noticed that, in each of the previous examples, it has been the case that

. This is not always true, but it does hold for all polynomials for any choice of

and for all rational functions at all values of

for which the rational function is defined.

Limits of Polynomial and Rational Functions

be a real number. Then,

To see that this theorem holds, consider the polynomial

. By applying the sum, constant multiple, and power laws, we end up with

It now follows from the quotient law that if

are polynomials for which

Evaluating a Limit of a Rational Function

Since 3 is in the domain of the rational function

, we can calculate the limit by substituting 3 for

into the function. Thus,

As we have seen, we may evaluate easily the limits of polynomials and limits of some (but not all) rational functions by direct substitution. However, as we saw in the introductory section on limits, it is certainly possible for

is undefined. The following observation allows us to evaluate many limits of this type:

To understand this idea better, consider the limit

are identical for all values of

The graphs of these two functions are shown in (Figure).

The limit has the form

has the indeterminate form 0/0.) The following Problem-Solving Strategy provides a general outline for evaluating limits of this type.

Problem-Solving Strategy: Calculating a Limit When

has the Indeterminate Form 0/0

The next examples demonstrate the use of this Problem-Solving Strategy. (Figure) illustrates the factor-and-cancel technique; (Figure) shows multiplying by a conjugate. In (Figure), we look at simplifying a complex fraction.

Evaluating a Limit by Factoring and Canceling

. In fact, if we substitute 3 into the function we get 0/0, which is undefined. Factoring and canceling is a good strategy:

Evaluating a Limit by Multiplying by a Conjugate

, on the numerator and denominator:

in the denominator cancels out in the end:

Evaluating a Limit by Simplifying a Complex Fraction

has the form 0/0 at 1. We simplify the algebraic fraction by multiplying by

Step 2. Next, we multiply through the numerators. Do not multiply the denominators because we want to be able to cancel the factor

Step 3. Then, we simplify the numerator:

Step 4. Now we factor out −1 from the numerator:

Step 5. Then, we cancel the common factors of

(Figure) does not fall neatly into any of the patterns established in the previous examples. However, with a little creativity, we can still use these same techniques.

Evaluating a Limit When the Limit Laws Do Not Apply

fail to have a limit at zero. Since neither of the two functions has a limit at zero, we cannot apply the sum law for limits; we must use a different strategy. In this case, we find the limit by performing addition and then applying one of our previous strategies. Observe that

Use the same technique as (Figure). Don’t forget to factor

before getting a common denominator.

, we require the function

to be defined over an open interval of the form

; for a limit of the form

, we require the function

to be defined over an open interval of the form

Evaluate each of the following limits, if possible.

and aids in our understanding of these limits.

In (Figure) we look at one-sided limits of a piecewise-defined function and use these limits to draw a conclusion about a two-sided limit of the same function.

evaluate each of the following limits:

and aids in our understanding of these limits. 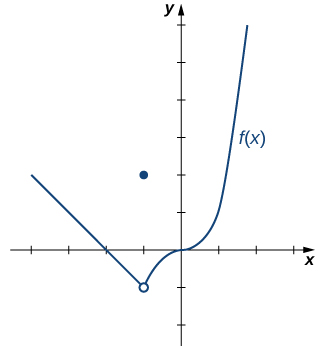 Use the method in (Figure) to evaluate the limit.

Evaluating a Limit of the Form

Step 1. After substituting in

, we see that this limit has the form

becomes infinite. To get a better idea of what the limit is, we need to factor the denominator:

is the only part of the denominator that is zero when 2 is substituted, we then separate

from the rest of the function:

. Therefore, the product of

has a limit of

Use the methods from (Figure).

that is unknown, between two functions having a common known limit at

over an open interval containing

in an open interval containing

is a real number, then

Apply the Squeeze Theorem to evaluate

is negative the direction of the inequalities changes when we multiply). Since

, from the Squeeze Theorem we obtain

Use the Squeeze Theorem to evaluate

Use the fact that

to help you find two functions such that

is squeezed between them.

We now use the Squeeze Theorem to tackle several very important limits. Although this discussion is somewhat lengthy, these limits prove invaluable for the development of the material in both the next section and the next chapter. The first of these limits is

. Consider the unit circle shown in (Figure). In the figure, we see that

, by using the Squeeze Theorem we conclude that

as well, observe that for

. An application of the Squeeze Theorem produces the desired limit. Thus, since

Next, using the identity

We now take a look at a limit that plays an important role in later chapters—namely,

. To evaluate this limit, we use the unit circle in (Figure). Notice that this figure adds one additional triangle to (Figure). We see that the length of the side opposite angle

in this new triangle is

in all parts of the inequality, we obtain

. By applying a manipulation similar to that used in demonstrating that

, we can show that

In (Figure) we use this limit to establish

In the first step, we multiply by the conjugate so that we can use a trigonometric identity to convert the cosine in the numerator to a sine:

Multiply numerator and denominator by

Deriving the Formula for the Area of a Circle

Some of the geometric formulas we take for granted today were first derived by methods that anticipate some of the methods of calculus. The Greek mathematician Archimedes (ca. 287−212 BCE) was particularly inventive, using polygons inscribed within circles to approximate the area of the circle as the number of sides of the polygon increased. He never came up with the idea of a limit, but we can use this idea to see what his geometric constructions could have predicted about the limit.

triangles. By taking the limit as the vertex angle of these triangles goes to zero, you can obtain the area of the circle. To see this, carry out the following steps:

The technique of estimating areas of regions by using polygons is revisited in Introduction to Integration.

In the following exercises, use the limit laws to evaluate each limit. Justify each step by indicating the appropriate limit law(s).

In the following exercises, use direct substitution to evaluate each limit.

In the following exercises, use direct substitution to show that each limit leads to the indeterminate form 0/0. Then, evaluate the limit.

is a real-valued constant

In the following exercises, use direct substitution to obtain an undefined expression. Then, use the method of (Figure) to simplify the function to help determine the limit.

In the following exercises, assume that

. Use these three facts and the limit laws to evaluate each limit.

In the following exercises, use a calculator to draw the graph of each piecewise-defined function and study the graph to evaluate the given limits. 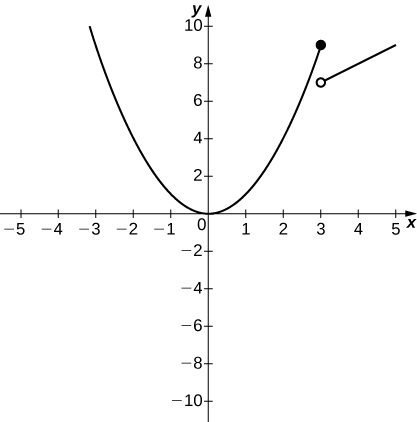 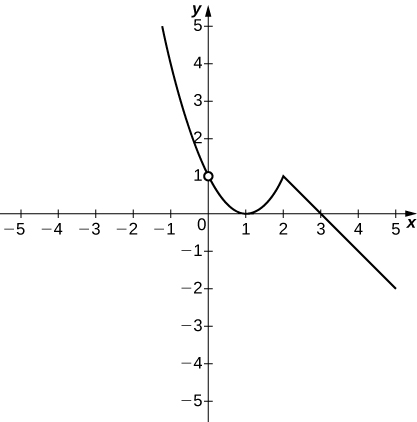 For the following problems, evaluate the limit using the Squeeze Theorem. Use a calculator to graph the functions

The limit is zero. 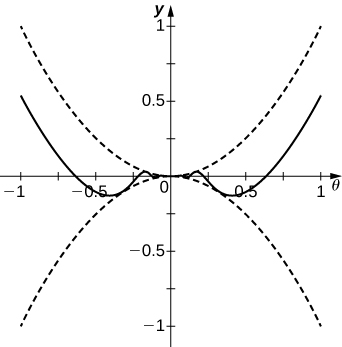 47. [T] In physics, the magnitude of an electric field generated by a point charge at a distance

in vacuum is governed by Coulomb’s law:

represents the magnitude of the electric field,

is the charge of the particle,

is the distance between the particle and where the strength of the field is measured, and 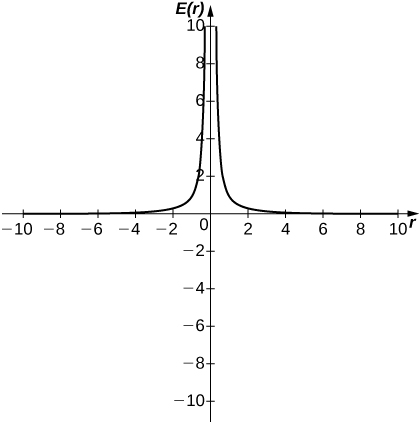 . The magnitude of the electric field as you approach the particle

becomes infinite. It does not make physical sense to evaluate negative distance.

48. [T] The density of an object is given by its mass divided by its volume:

are real numbers so that

for every positive integer

is odd and for

Squeeze Theorem
states that if

over an open interval containing

is a real number, then

2.3 The Limit Laws by OSCRiceUniversity is licensed under a Creative Commons Attribution-NonCommercial-ShareAlike 4.0 International License, except where otherwise noted.