(Figure) was an applied situation involving maximizing a profit function, subject to certain constraints. In that example, the constraints involved a maximum number of golf balls that could be produced and sold in

Suppose these were combined into a budgetary constraint, such as

that took into account the cost of producing the golf balls and the number of advertising hours purchased per month. The goal is, still, to maximize profit, but now there is a different type of constraint on the values of

This constraint, when combined with the profit function

is an example of an optimization problem, and the function

is called the objective function. A graph of various level curves of the function

Graph of level curves of the function 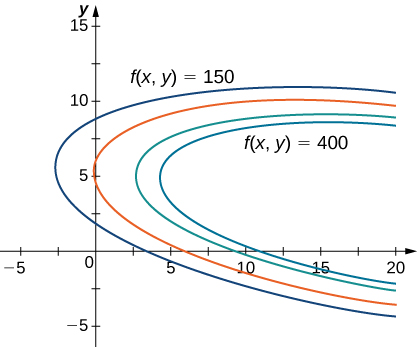 In (Figure), the value

As the value of

increases, the curve shifts to the right. Since our goal is to maximize profit, we want to choose a curve as far to the right as possible. If there was no restriction on the number of golf balls the company could produce, or the number of units of advertising available, then we could produce as many golf balls as we want, and advertise as much as we want, and there would be not be a maximum profit for the company. Unfortunately, we have a budgetary constraint that is modeled by the inequality

To see how this constraint interacts with the profit function, (Figure) shows the graph of the line

superimposed on the previous graph.

Graph of level curves of the function

The red graph is the constraint function. 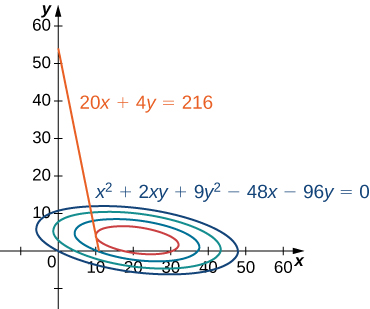 As mentioned previously, the maximum profit occurs when the level curve is as far to the right as possible. However, the level of production corresponding to this maximum profit must also satisfy the budgetary constraint, so the point at which this profit occurs must also lie on (or to the left of) the red line in (Figure). Inspection of this graph reveals that this point exists where the line is tangent to the level curve of

are both just less than

We return to the solution of this problem later in this section. From a theoretical standpoint, at the point where the profit curve is tangent to the constraint line, the gradient of both of the functions evaluated at that point must point in the same (or opposite) direction. Recall that the gradient of a function of more than one variable is a vector. If two vectors point in the same (or opposite) directions, then one must be a constant multiple of the other. This idea is the basis of the method of Lagrange multipliers.

Method of Lagrange Multipliers: One Constraint

when restricted to points on the curve

has a local extremum at the point

Then there is a number

called a Lagrange multiplier, for which

Assume that a constrained extremum occurs at the point

Furthermore, we assume that the equation

can be smoothly parameterized as

where s is an arc length parameter with reference point

and this implies that

at that point. From the chain rule,

where the derivatives are all evaluated at

However, the first factor in the dot product is the gradient of

and the second factor is the unit tangent vector

to the constraint curve. Since the point

it follows from this equation that

which implies that the gradient is either

is a level curve for the function

is normal to this curve at

It follows, then, that there is some scalar

To apply (Figure) to an optimization problem similar to that for the golf ball manufacturer, we need a problem-solving strategy.

has a maximum value of

Use the problem-solving strategy for the method of Lagrange multipliers.

Let’s now return to the problem posed at the beginning of the section.

The golf ball manufacturer, Pro-T, has developed a profit model that depends on the number

of golf balls sold per month (measured in thousands), and the number of hours per month of advertising y, according to the function

is measured in thousands of dollars. The budgetary constraint function relating the cost of the production of thousands golf balls and advertising units is given by

Find the values of

that maximize profit, and find the maximum profit.

where x represents the total number of labor hours in

year and y represents the total capital input for the company. Suppose

subject to a budgetary constraint of

A maximum production level of

Use the problem-solving strategy for the method of Lagrange multipliers.

represents the cost of labor,

represents the cost of advertising. The method is the same as for the method with a function of two variables; the equations to be solved are

Use the problem-solving strategy for the method of Lagrange multipliers with an optimization function of three variables.

The method of Lagrange multipliers can be applied to problems with more than one constraint. In this case the optimization function,

is a function of three variables:

and it is subject to two constraints:

There are two Lagrange multipliers,

and the system of equations becomes

Find the maximum and minimum values of the function

subject to the constraints

subject to the constraints

Use the problem-solving strategy for the method of Lagrange multipliers with two constraints.

For the following exercises, use the method of Lagrange multipliers to find the maximum and minimum values of the function subject to the given constraints.

is asymptotic to the line

Find the point(s) on the curve

farthest from the line

For the next group of exercises, use the method of Lagrange multipliers to solve the following applied problems.

A pentagon is formed by placing an isosceles triangle on a rectangle, as shown in the diagram. If the perimeter of the pentagon is 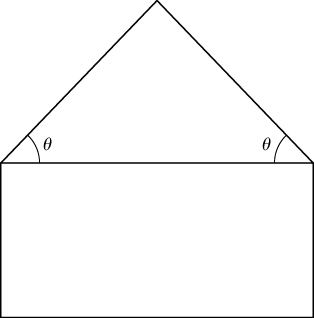 ft2 of cardboard. Find the maximum volume of such a box.

The maximum volume is

ft3. The dimensions are

Find the minimum and maximum distances between the ellipse

Find the point on the surface

closest to the point

Show that, of all the triangles inscribed in a circle of radius

(see diagram), the equilateral triangle has the largest perimeter. 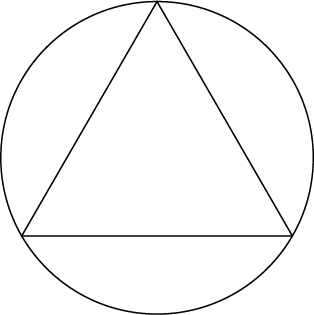 Find the minimum distance from point

Find the minimum distance from the parabola

Find the minimum distance from the plane

Find the point on the line

that is closest to point

Find the point on the plane

that is closest to the point

Find the maximum value of

denote the acute angles of a right triangle. Draw the contours of the function using a CAS. 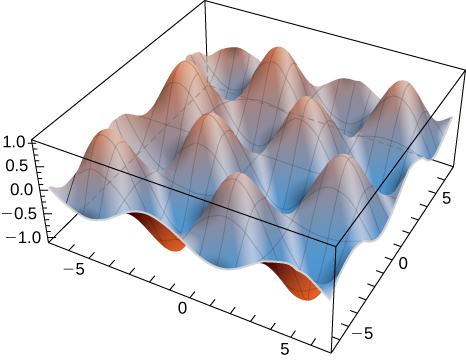 A rectangular solid is contained within a tetrahedron with vertices at

and the origin. The base of the box has dimensions

and the height of the box is

If the sum of

is 1.0, find the dimensions that maximizes the volume of the rectangular solid.

[T] By investing x units of labor and y units of capital, a watch manufacturer can produce

watches. Find the maximum number of watches that can be produced on a budget of

if labor costs 💲100/unit and capital costs 💲200/unit. Use a CAS to sketch a contour plot of the function.

Roughly 3365 watches at the critical point 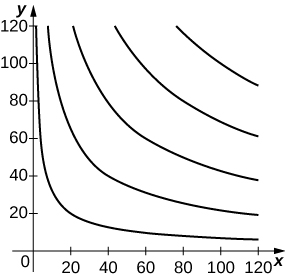 For the following exercises, determine whether the statement is true or false. Justify your answer with a proof or a counterexample.

all real numbers, and

is continuous everywhere, then

The linear approximation to the function of

is a critical point of

For the following exercises, sketch the function in one graph and, in a second, sketch several level curves.

For the following exercises, find the largest interval of continuity for the function.

Continuous at all points on the

For the following exercises, find all first partial derivatives.

For the following exercises, find all second partial derivatives.

For the following exercises, find the equation of the tangent plane to the specified surface at the given point.

Write down your linear approximation function

How accurate is the approximation to the exact answer, rounded to four digits?

Find the directional derivative of

Find the maximal directional derivative magnitude and direction for the function

For the following exercises, find the gradient.

For the following exercises, find and classify the critical points.

For the following exercises, use Lagrange multipliers to find the maximum and minimum values for the functions with the given constraints.

A machinist is constructing a right circular cone out of a block of aluminum. The machine gives an error of

in radius. Find the maximum error in the volume of the cone if the machinist creates a cone of height

ft/sec, respectively. Find the rate at which the liquid level is rising when the length is

ft, the width is

ft, and the height is

constraint
an inequality or equation involving one or more variables that is used in an optimization problem; the constraint enforces a limit on the possible solutions for the problem

optimization problem
calculation of a maximum or minimum value of a function of several variables, often using Lagrange multipliers

Lagrange Multipliers by OSCRiceUniversity is licensed under a Creative Commons Attribution-NonCommercial-ShareAlike 4.0 International License, except where otherwise noted.