Chain Rules for One or Two Independent Variables

In this equation, both

are functions of one variable. Now suppose that

is a function of two variables and

is a function of one variable. Or perhaps they are both functions of two variables, or even more. How would we calculate the derivative in these cases? The following theorem gives us the answer for the case of one independent variable.

Chain Rule for One Independent Variable

are differentiable functions of

where the ordinary derivatives are evaluated at

and the partial derivatives are evaluated at

The proof of this theorem uses the definition of differentiability of a function of two variables. Suppose that f is differentiable at the point

for a fixed value of

We wish to prove that

and that (Figure) holds at that point as well.

from both sides of this equation:

Next, we divide both sides by

Then we take the limit as

The left-hand side of this equation is equal to

The last term can be rewritten as

so we can rewrite the last product as

Since the first limit is equal to zero, we need only show that the second limit is finite:

are both differentiable functions of

both limits inside the last radical exist. Therefore, this value is finite. This proves the chain rule at

the rest of the theorem follows from the assumption that all functions are differentiable over their entire domains.

Closer examination of (Figure) reveals an interesting pattern. The first term in the equation is

and the second term is

Recall that when multiplying fractions, cancelation can be used. If we treat these derivatives as fractions, then each product “simplifies” to something resembling

that disappear in this simplification are often called intermediate variables: they are independent variables for the function

but are dependent variables for the variable

Two terms appear on the right-hand side of the formula, and

is a function of two variables. This pattern works with functions of more than two variables as well, as we see later in this section.

for each of the following functions:

given the following functions. Express the final answer in terms of

Tree diagram for the case 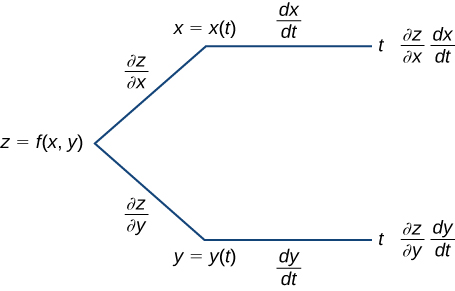 In this diagram, the leftmost corner corresponds to

has two independent variables, there are two lines coming from this corner. The upper branch corresponds to the variable

and the lower branch corresponds to the variable

Since each of these variables is then dependent on one variable

one branch then comes from

and one branch comes from

Last, each of the branches on the far right has a label that represents the path traveled to reach that branch. The top branch is reached by following the

branch; therefore, it is labeled

The bottom branch is similar: first the

branch. This branch is labeled

To get the formula for

add all the terms that appear on the rightmost side of the diagram. This gives us (Figure).

is a function of

are functions of the independent variables

are differentiable functions of

We can draw a tree diagram for each of these formulas as well as follows. 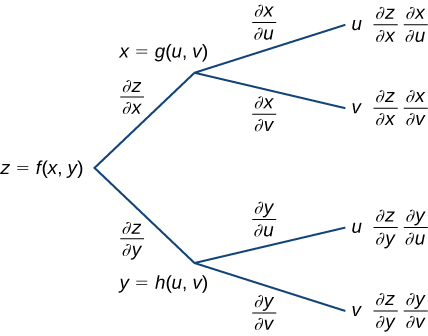 To derive the formula for

start from the left side of the diagram, then follow only the branches that end with

and add the terms that appear at the end of those branches. For the formula for

and add the terms that appear at the end of those branches.

There is an important difference between these two chain rule theorems. In (Figure), the left-hand side of the formula for the derivative is not a partial derivative, but in (Figure) it is. The reason is that, in (Figure),

is ultimately a function of

alone, whereas in (Figure),

is a function of both

To implement the chain rule for two variables, we need six partial derivatives—

given the following functions:

then use (Figure) and (Figure).

be a differentiable function of

independent variables, and for each

be a differentiable function of

In the next example we calculate the derivative of a function of three independent variables in which each of the three variables is dependent on two other variables. 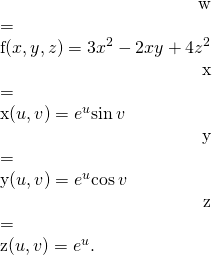 Therefore, there are nine different partial derivatives that need to be calculated and substituted. We need to calculate each of them:

Now, we substitute each of them into the first formula to calculate

given the following functions:

Calculate nine partial derivatives, then use the same formulas from (Figure).

Create a tree diagram for the case when

and write out the formulas for the three partial derivatives of

Starting from the left, the function 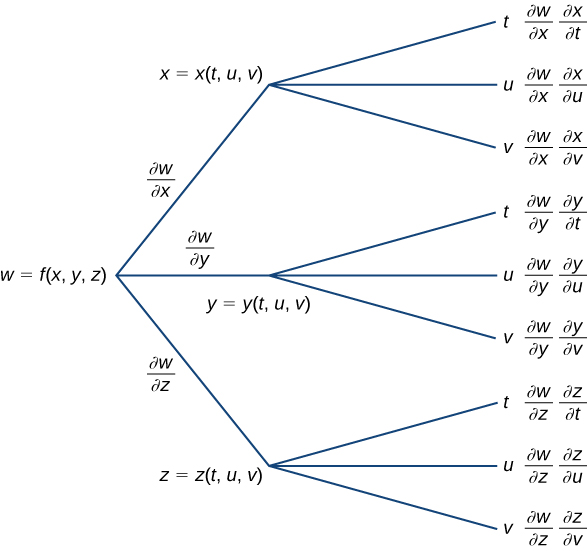 The three formulas are

Create a tree diagram for the case when

and write out the formulas for the three partial derivatives of 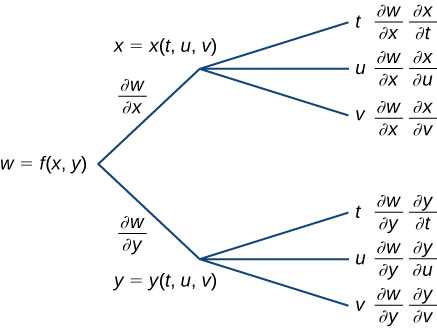 Determine the number of branches that emanate from each node in the tree.

Partial derivatives provide an alternative to this method.

Consider the ellipse defined by the equation

Graph of the ellipse defined by 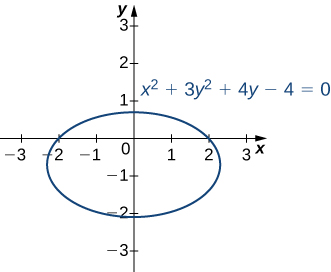 as a function of

As such, we can find the derivative

using the method of implicit differentiation:

We can also define a function

by using the left-hand side of the equation defining the ellipse. Then

can then be described by the equation

Implicit Differentiation of a Function of Two or More Variables

implicitly as a function

implicitly as a differentiable function of

(Figure) is a direct consequence of (Figure). In particular, if we assume that

we can apply the chain rule to find

gives (Figure). (Figure) can be derived in a similar fashion.

Let’s now return to the problem that we started before the previous theorem. Using (Figure) and the function

which is the same result obtained by the earlier use of implicit differentiation.

Equation of the tangent line:

For the following exercises, use the information provided to solve the problem.

For the following exercises, find

as a function of

For the following exercises, find

using the chain rule where

by the chain rule where

For the following exercises, use this information: A function

is said to be homogeneous of degree

For all homogeneous functions of degree

the following equation is true:

Show that the given function is homogeneous and verify that

The volume of a right circular cylinder is given by

where temperature is expressed in kelvins. Express the pressure of the gas as a function of both

The radius of a right circular cone is increasing at

cm/min whereas the height of the cone is decreasing at

cm/min. Find the rate of change of the volume of the cone when the radius is

cm and the height is

is the radius of the smaller circle,

is the radius of the larger circle, and

is the height of the frustum (see figure). Find the rate of change of the volume of this frustum when 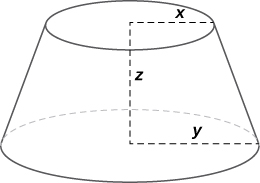 (Dimensions are in inches.) Suppose each dimension is changing at the rate of

in./min. Find the rate of change of the total surface area of the box when

is given by the formula

Suppose at a given time the

the y resistance is

resistance is changing at a rate of

resistance is changing at the rate of

resistance has no change. Find the rate of change of the total resistance in this circuit at this time.

and is measured using the Celsius scale. A fly crawls so that its position after

seconds is given by

are measured in centimeters. The temperature function satisfies

components of a fluid moving in two dimensions are given by the following functions:

The speed of the fluid at the point

intermediate variable
given a composition of functions (e.g.,

the intermediate variables are the variables that are independent in the outer function but dependent on other variables as well; in the function

are examples of intermediate variables

tree diagram
illustrates and derives formulas for the generalized chain rule, in which each independent variable is accounted for

Calculus Volume 3 by OSCRiceUniversity is licensed under a Creative Commons Attribution-NonCommercial-ShareAlike 4.0 International License, except where otherwise noted.