Among the factors affecting chemical reaction rates discussed earlier in this chapter was the presence of a catalyst, a substance that can increase the reaction rate without being consumed in the reaction. The concepts introduced in the previous section on reaction mechanisms provide the basis for understanding how catalysts are able to accomplish this very important function.

(Figure) shows reaction diagrams for a chemical process in the absence and presence of a catalyst. Inspection of the diagrams reveals several traits of these reactions. Consistent with the fact that the two diagrams represent the same overall reaction, both curves begin and end at the same energies (in this case, because products are more energetic than reactants, the reaction is endothermic). The reaction mechanisms, however, are clearly different. The uncatalyzed reaction proceeds via a one-step mechanism (one transition state observed), whereas the catalyzed reaction follows a two-step mechanism (two transition states observed) with a notably lesser activation energy. This difference illustrates the means by which a catalyst functions to accelerate reactions, namely, by providing an alternative reaction mechanism with a lower activation energy. Although the catalyzed reaction mechanism for a reaction needn’t necessarily involve a different number of steps than the uncatalyzed mechanism, it must provide a reaction path whose rate determining step is faster (lower Ea).

Reaction diagrams for an endothermic process in the absence (red curve) and presence (blue curve) of a catalyst. The catalyzed pathway involves a two-step mechanism (note the presence of two transition states) and an intermediate species (represented by the valley between the two transitions states). 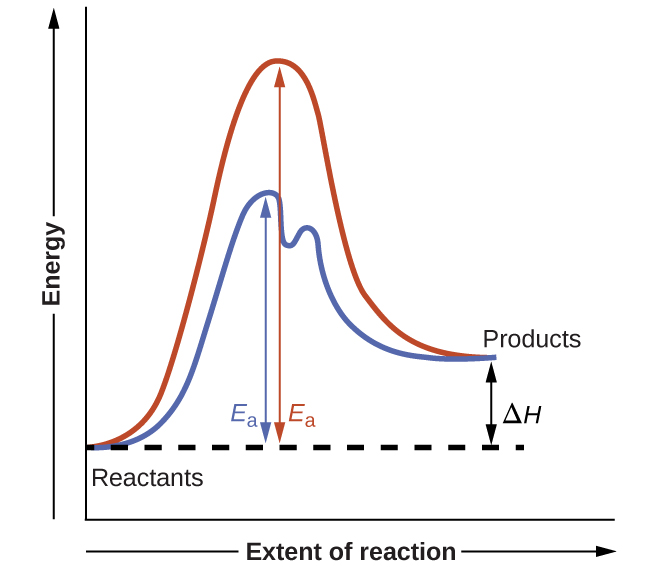 Reaction Diagrams for Catalyzed Reactions The two reaction diagrams here represent the same reaction: one without a catalyst and one with a catalyst. Estimate the activation energy for each process, and identify which one involves a catalyst.

Solution Activation energies are calculated by subtracting the reactant energy from the transition state energy.

The catalyzed reaction is the one with lesser activation energy, in this case represented by diagram b.

Check Your Learning Reaction diagrams for a chemical process with and without a catalyst are shown below. Both reactions involve a two-step mechanism with a rate-determining first step. Compute activation energies for the first step of each mechanism, and identify which corresponds to the catalyzed reaction. How do the second steps of these two mechanisms compare?

For the first step, Ea = 80 kJ for (a) and 70 kJ for (b), so diagram (b) depicts the catalyzed reaction. Activation energies for the second steps of both mechanisms are the same, 20 kJ.

A homogeneous catalyst is present in the same phase as the reactants. It interacts with a reactant to form an intermediate substance, which then decomposes or reacts with another reactant in one or more steps to regenerate the original catalyst and form product.

As an important illustration of homogeneous catalysis, consider the earth’s ozone layer. Ozone in the upper atmosphere, which protects the earth from ultraviolet radiation, is formed when oxygen molecules absorb ultraviolet light and undergo the reaction:

Ozone is a relatively unstable molecule that decomposes to yield diatomic oxygen by the reverse of this equation. This decomposition reaction is consistent with the following two-step mechanism:

Notice that NO is a reactant in the first step of the mechanism and a product in the last step. This is another characteristic trait of a catalyst: Though it participates in the chemical reaction, it is not consumed by the reaction.

The 1995 Nobel Prize in Chemistry was shared by Paul J. Crutzen, Mario J. Molina ((Figure)), and F. Sherwood Rowland “for their work in atmospheric chemistry, particularly concerning the formation and decomposition of ozone.”1 Molina, a Mexican citizen, carried out the majority of his work at the Massachusetts Institute of Technology (MIT).

(a) Mexican chemist Mario Molina (1943 –) shared the Nobel Prize in Chemistry in 1995 for his research on (b) the Antarctic ozone hole. (credit a: courtesy of Mario Molina; credit b: modification of work by NASA)

In 1974, Molina and Rowland published a paper in the journal Nature detailing the threat of chlorofluorocarbon gases to the stability of the ozone layer in earth’s upper atmosphere. The ozone layer protects earth from solar radiation by absorbing ultraviolet light. As chemical reactions deplete the amount of ozone in the upper atmosphere, a measurable “hole” forms above Antarctica, and an increase in the amount of solar ultraviolet radiation— strongly linked to the prevalence of skin cancers—reaches earth’s surface. The work of Molina and Rowland was instrumental in the adoption of the Montreal Protocol, an international treaty signed in 1987 that successfully began phasing out production of chemicals linked to ozone destruction.

Molina and Rowland demonstrated that chlorine atoms from human-made chemicals can catalyze ozone destruction in a process similar to that by which NO accelerates the depletion of ozone. Chlorine atoms are generated when chlorocarbons or chlorofluorocarbons—once widely used as refrigerants and propellants—are photochemically decomposed by ultraviolet light or react with hydroxyl radicals. A sample mechanism is shown here using methyl chloride:

Chlorine radicals break down ozone and are regenerated by the following catalytic cycle:

A single monatomic chlorine can break down thousands of ozone molecules. Luckily, the majority of atmospheric chlorine exists as the catalytically inactive forms Cl2 and ClONO2.

Since receiving his portion of the Nobel Prize, Molina has continued his work in atmospheric chemistry at MIT.

Enzymes in the human body act as catalysts for important chemical reactions in cellular metabolism. As such, a deficiency of a particular enzyme can translate to a life-threatening disease. G6PD (glucose-6-phosphate dehydrogenase) deficiency, a genetic condition that results in a shortage of the enzyme glucose-6-phosphate dehydrogenase, is the most common enzyme deficiency in humans. This enzyme, shown in (Figure), is the rate-limiting enzyme for the metabolic pathway that supplies NADPH to cells ((Figure)).

Glucose-6-phosphate dehydrogenase is a rate-limiting enzyme for the metabolic pathway that supplies NADPH to cells. 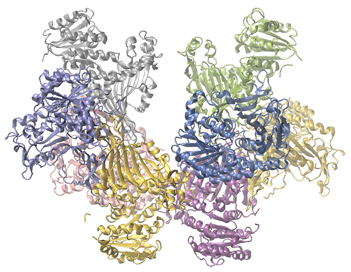 A disruption in this pathway can lead to reduced glutathione in red blood cells; once all glutathione is consumed, enzymes and other proteins such as hemoglobin are susceptible to damage. For example, hemoglobin can be metabolized to bilirubin, which leads to jaundice, a condition that can become severe. People who suffer from G6PD deficiency must avoid certain foods and medicines containing chemicals that can trigger damage their glutathione-deficient red blood cells.

In the mechanism for the pentose phosphate pathway, G6PD catalyzes the reaction that regulates NADPH, a co-enzyme that regulates glutathione, an antioxidant that protects red blood cells and other cells from oxidative damage.

Mechanism for the Ni-catalyzed reaction

Scientists developed catalytic converters to reduce the amount of toxic emissions produced by burning gasoline in internal combustion engines. By utilizing a carefully selected blend of catalytically active metals, it is possible to effect complete combustion of all carbon-containing compounds to carbon dioxide while also reducing the output of nitrogen oxides. This is particularly impressive when we consider that one step involves adding more oxygen to the molecule and the other involves removing the oxygen ((Figure)).

A catalytic converter allows for the combustion of all carbon-containing compounds to carbon dioxide, while at the same time reducing the output of nitrogen oxide and other pollutants in emissions from gasoline-burning engines. 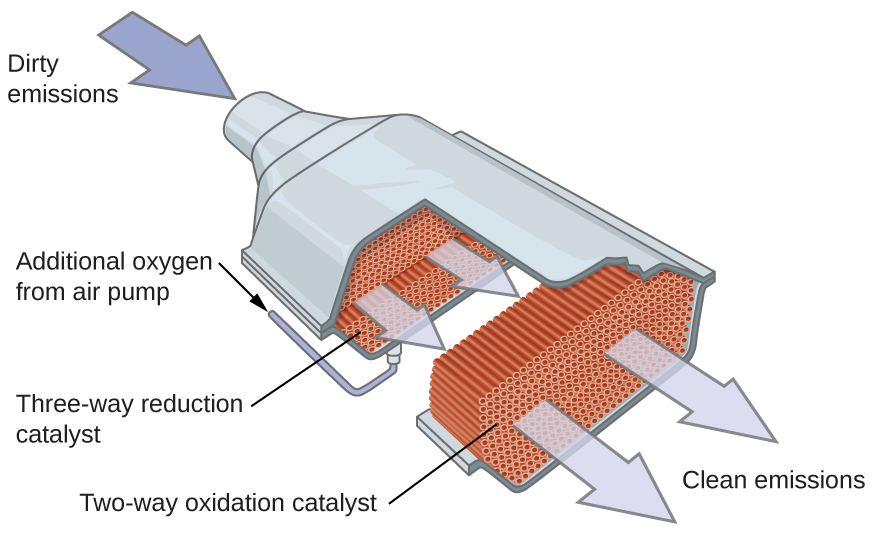 Most modern, three-way catalytic converters possess a surface impregnated with a platinum-rhodium catalyst, which catalyzes the conversion of nitric oxide into dinitrogen and oxygen as well as the conversion of carbon monoxide and hydrocarbons such as octane into carbon dioxide and water vapor:

In order to be as efficient as possible, most catalytic converters are preheated by an electric heater. This ensures that the metals in the catalyst are fully active even before the automobile exhaust is hot enough to maintain appropriate reaction temperatures.

The University of California at Davis’ “ChemWiki” provides a thorough explanation of how catalytic converters work.

The study of enzymes is an important interconnection between biology and chemistry. Enzymes are usually proteins (polypeptides) that help to control the rate of chemical reactions between biologically important compounds, particularly those that are involved in cellular metabolism. Different classes of enzymes perform a variety of functions, as shown in (Figure).

Enzyme molecules possess an active site, a part of the molecule with a shape that allows it to bond to a specific substrate (a reactant molecule), forming an enzyme-substrate complex as a reaction intermediate. There are two models that attempt to explain how this active site works. The most simplistic model is referred to as the lock-and-key hypothesis, which suggests that the molecular shapes of the active site and substrate are complementary, fitting together like a key in a lock. The induced fit hypothesis, on the other hand, suggests that the enzyme molecule is flexible and changes shape to accommodate a bond with the substrate. This is not to suggest that an enzyme’s active site is completely malleable, however. Both the lock-and-key model and the induced fit model account for the fact that enzymes can only bind with specific substrates, since in general a particular enzyme only catalyzes a particular reaction ((Figure)).

The Royal Society of Chemistry provides an excellent introduction to enzymes for students and teachers.

Catalysts affect the rate of a chemical reaction by altering its mechanism to provide a lower activation energy. Catalysts can be homogenous (in the same phase as the reactants) or heterogeneous (a different phase than the reactants).

Account for the increase in reaction rate brought about by a catalyst.

The general mode of action for a catalyst is to provide a mechanism by which the reactants can unite more readily by taking a path with a lower reaction energy. The rates of both the forward and the reverse reactions are increased, leading to a faster achievement of equilibrium.

Compare the functions of homogeneous and heterogeneous catalysts.

(a) Explain why chlorine atoms are catalysts in the gas-phase transformation:

(b) Nitric oxide is also involved in the decomposition of ozone by the mechanism:

Is NO a catalyst for the decomposition? Explain your answer.

(a) Chlorine atoms are a catalyst because they react in the second step but are regenerated in the third step. Thus, they are not used up, which is a characteristic of catalysts. (b) NO is a catalyst for the same reason as in part (a).

For each of the following pairs of reaction diagrams, identify which of the pair is catalyzed:

For each of the following pairs of reaction diagrams, identify which of the pairs is catalyzed:

The lowering of the transition state energy indicates the effect of a catalyst. (a) B; (b) B

For each of the following reaction diagrams, estimate the activation energy (Ea) of the reaction: 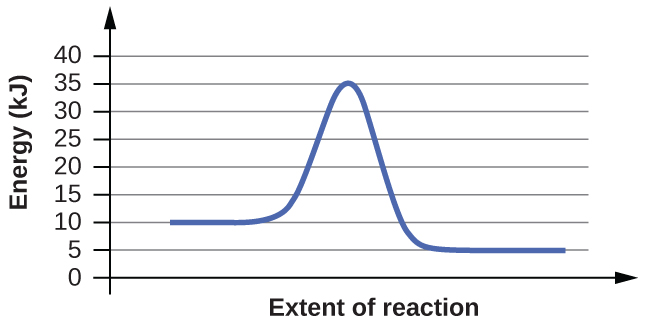 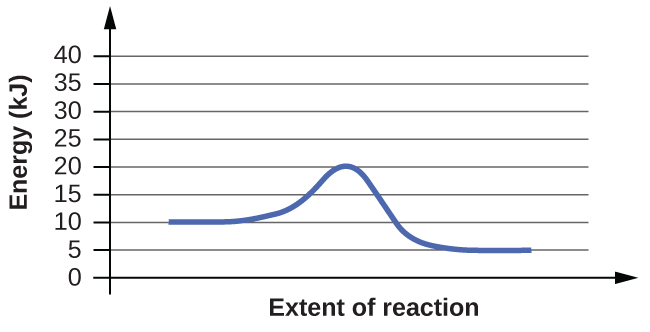 For each of the following reaction diagrams, estimate the activation energy (Ea) of the reaction: 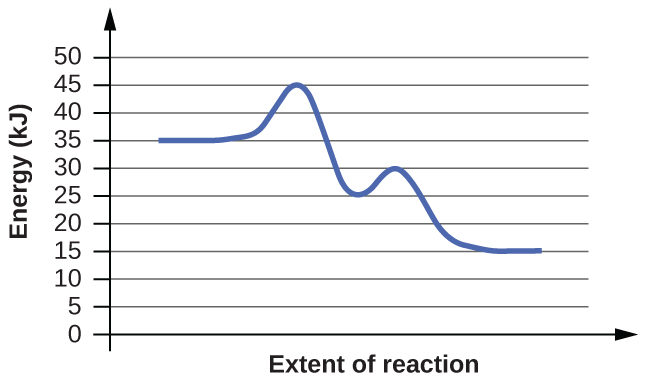 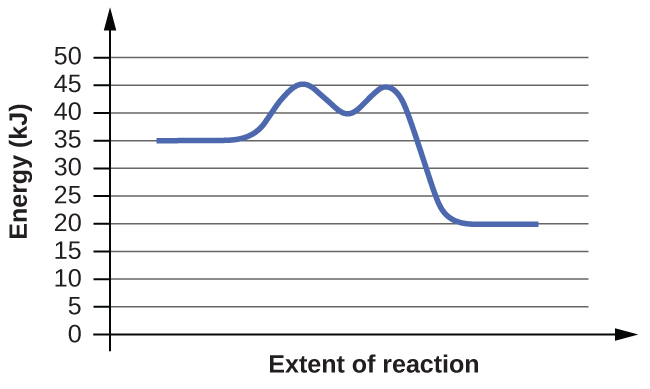 Assuming the diagrams in (Figure) represent different mechanisms for the same reaction, which of the reactions has the faster rate?

heterogeneous catalyst
catalyst present in a different phase from the reactants, furnishing a surface at which a reaction can occur

homogeneous catalyst
catalyst present in the same phase as the reactants