By the end of this module, you will be able to:

Throughout human history, people have tried to convert matter into more useful forms. Our Stone Age ancestors chipped pieces of flint into useful tools and carved wood into statues and toys. These endeavors involved changing the shape of a substance without changing the substance itself. But as our knowledge increased, humans began to change the composition of the substances as well—clay was converted into pottery, hides were cured to make garments, copper ores were transformed into copper tools and weapons, and grain was made into bread.

Humans began to practice chemistry when they learned to control fire and use it to cook, make pottery, and smelt metals. Subsequently, they began to separate and use specific components of matter. A variety of drugs such as aloe, myrrh, and opium were isolated from plants. Dyes, such as indigo and Tyrian purple, were extracted from plant and animal matter. Metals were combined to form alloys—for example, copper and tin were mixed together to make bronze—and more elaborate smelting techniques produced iron. Alkalis were extracted from ashes, and soaps were prepared by combining these alkalis with fats. Alcohol was produced by fermentation and purified by distillation.

Attempts to understand the behavior of matter extend back for more than 2500 years. As early as the sixth century BC, Greek philosophers discussed a system in which water was the basis of all things. You may have heard of the Greek postulate that matter consists of four elements: earth, air, fire, and water. Subsequently, an amalgamation of chemical technologies and philosophical speculations was spread from Egypt, China, and the eastern Mediterranean by alchemists, who endeavored to transform “base metals” such as lead into “noble metals” like gold, and to create elixirs to cure disease and extend life ((Figure)).

This portrayal shows an alchemist’s workshop circa 1580. Although alchemy made some useful contributions to how to manipulate matter, it was not scientific by modern standards. (credit: Chemical Heritage Foundation) 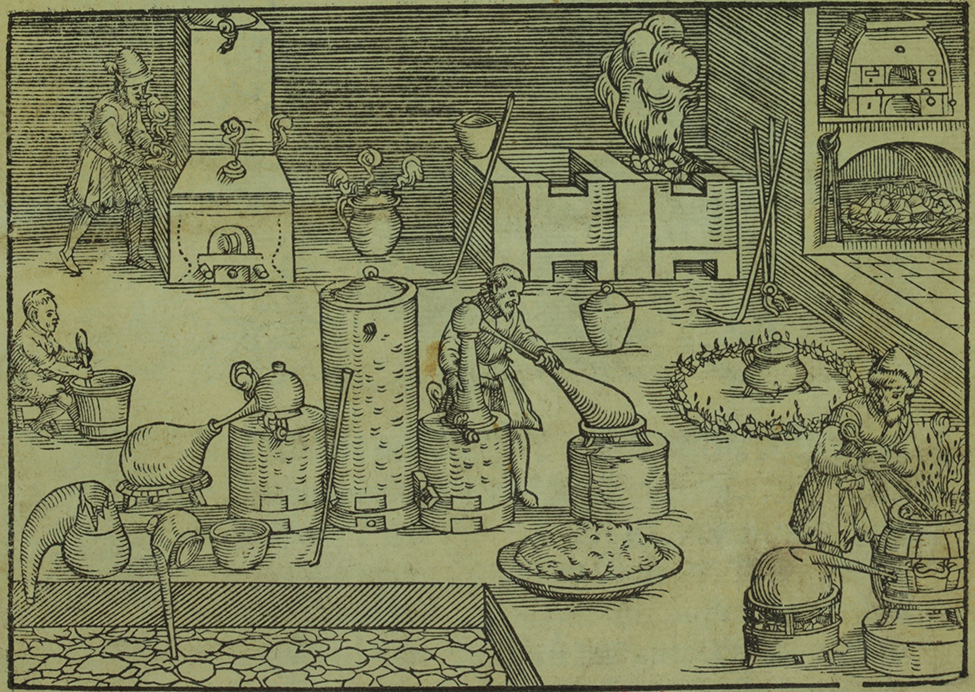 From alchemy came the historical progressions that led to modern chemistry: the isolation of drugs from natural sources, metallurgy, and the dye industry. Today, chemistry continues to deepen our understanding and improve our ability to harness and control the behavior of matter.

Chemistry is sometimes referred to as “the central science” due to its interconnectedness with a vast array of other STEM disciplines (STEM stands for areas of study in the science, technology, engineering, and math fields). Chemistry and the language of chemists play vital roles in biology, medicine, materials science, forensics, environmental science, and many other fields ((Figure)). The basic principles of physics are essential for understanding many aspects of chemistry, and there is extensive overlap between many subdisciplines within the two fields, such as chemical physics and nuclear chemistry. Mathematics, computer science, and information theory provide important tools that help us calculate, interpret, describe, and generally make sense of the chemical world. Biology and chemistry converge in biochemistry, which is crucial to understanding the many complex factors and processes that keep living organisms (such as us) alive. Chemical engineering, materials science, and nanotechnology combine chemical principles and empirical findings to produce useful substances, ranging from gasoline to fabrics to electronics. Agriculture, food science, veterinary science, and brewing and wine making help provide sustenance in the form of food and drink to the world’s population. Medicine, pharmacology, biotechnology, and botany identify and produce substances that help keep us healthy. Environmental science, geology, oceanography, and atmospheric science incorporate many chemical ideas to help us better understand and protect our physical world. Chemical ideas are used to help understand the universe in astronomy and cosmology.

Knowledge of chemistry is central to understanding a wide range of scientific disciplines. This diagram shows just some of the interrelationships between chemistry and other fields.

What are some changes in matter that are essential to daily life? Digesting and assimilating food, synthesizing polymers that are used to make clothing, containers, cookware, and credit cards, and refining crude oil into gasoline and other products are just a few examples. As you proceed through this course, you will discover many different examples of changes in the composition and structure of matter, how to classify these changes and how they occurred, their causes, the changes in energy that accompany them, and the principles and laws involved. As you learn about these things, you will be learning chemistry, the study of the composition, properties, and interactions of matter. The practice of chemistry is not limited to chemistry books or laboratories: It happens whenever someone is involved in changes in matter or in conditions that may lead to such changes.

Chemistry is a science based on observation and experimentation. Doing chemistry involves attempting to answer questions and explain observations in terms of the laws and theories of chemistry, using procedures that are accepted by the scientific community. There is no single route to answering a question or explaining an observation, but there is an aspect common to every approach: Each uses knowledge based on experiments that can be reproduced to verify the results. Some routes involve a hypothesis, a tentative explanation of observations that acts as a guide for gathering and checking information. A hypothesis is tested by experimentation, calculation, and/or comparison with the experiments of others and then refined as needed.

Some hypotheses are attempts to explain the behavior that is summarized in laws. The laws of science summarize a vast number of experimental observations, and describe or predict some facet of the natural world. If such a hypothesis turns out to be capable of explaining a large body of experimental data, it can reach the status of a theory. Scientific theories are well-substantiated, comprehensive, testable explanations of particular aspects of nature. Theories are accepted because they provide satisfactory explanations, but they can be modified if new data become available. The path of discovery that leads from question and observation to law or hypothesis to theory, combined with experimental verification of the hypothesis and any necessary modification of the theory, is called the scientific method ((Figure)).

The scientific method follows a process similar to the one shown in this diagram. All the key components are shown, in roughly the right order. Scientific progress is seldom neat and clean: It requires open inquiry and the reworking of questions and ideas in response to findings. 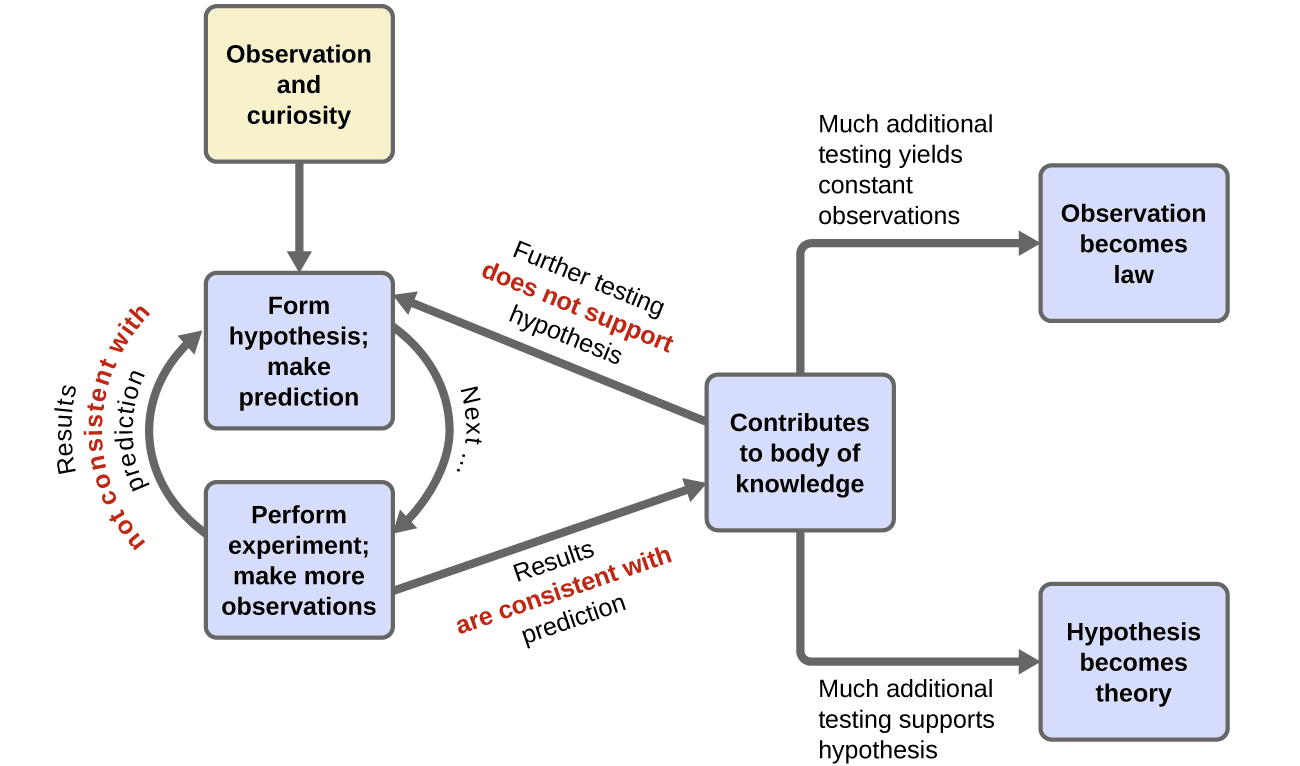 The Domains of Chemistry

Chemists study and describe the behavior of matter and energy in three different domains: macroscopic, microscopic, and symbolic. These domains provide different ways of considering and describing chemical behavior.

Macro is a Greek word that means “large.” The macroscopic domain is familiar to us: It is the realm of everyday things that are large enough to be sensed directly by human sight or touch. In daily life, this includes the food you eat and the breeze you feel on your face. The macroscopic domain includes everyday and laboratory chemistry, where we observe and measure physical and chemical properties such as density, solubility, and flammability.

Micro comes from Greek and means “small.” The microscopic domain of chemistry is often visited in the imagination. Some aspects of the microscopic domain are visible through standard optical microscopes, for example, many biological cells. More sophisticated instruments are capable of imaging even smaller entities such as molecules and atoms (see (Figure) (b)).

A helpful way to understand the three domains is via the essential and ubiquitous substance of water. That water is a liquid at moderate temperatures, will freeze to form a solid at lower temperatures, and boil to form a gas at higher temperatures ((Figure)) are macroscopic observations. But some properties of water fall into the microscopic domain—what cannot be observed with the naked eye. The description of water as comprising two hydrogen atoms and one oxygen atom, and the explanation of freezing and boiling in terms of attractions between these molecules, is within the microscopic arena. The formula H2O, which can describe water at either the macroscopic or microscopic levels, is an example of the symbolic domain. The abbreviations (g) for gas, (s) for solid, and (l) for liquid are also symbolic.

(a) Moisture in the air, icebergs, and the ocean represent water in the macroscopic domain. (b) At the molecular level (microscopic domain), gas molecules are far apart and disorganized, solid water molecules are close together and organized, and liquid molecules are close together and disorganized. (c) The formula H2O symbolizes water, and (g), (s), and (l) symbolize its phases. Note that clouds actually comprise either very small liquid water droplets or solid water crystals; gaseous water in our atmosphere is not visible to the naked eye, although it may be sensed as humidity. (credit a: modification of work by “Gorkaazk”/Wikimedia Commons) 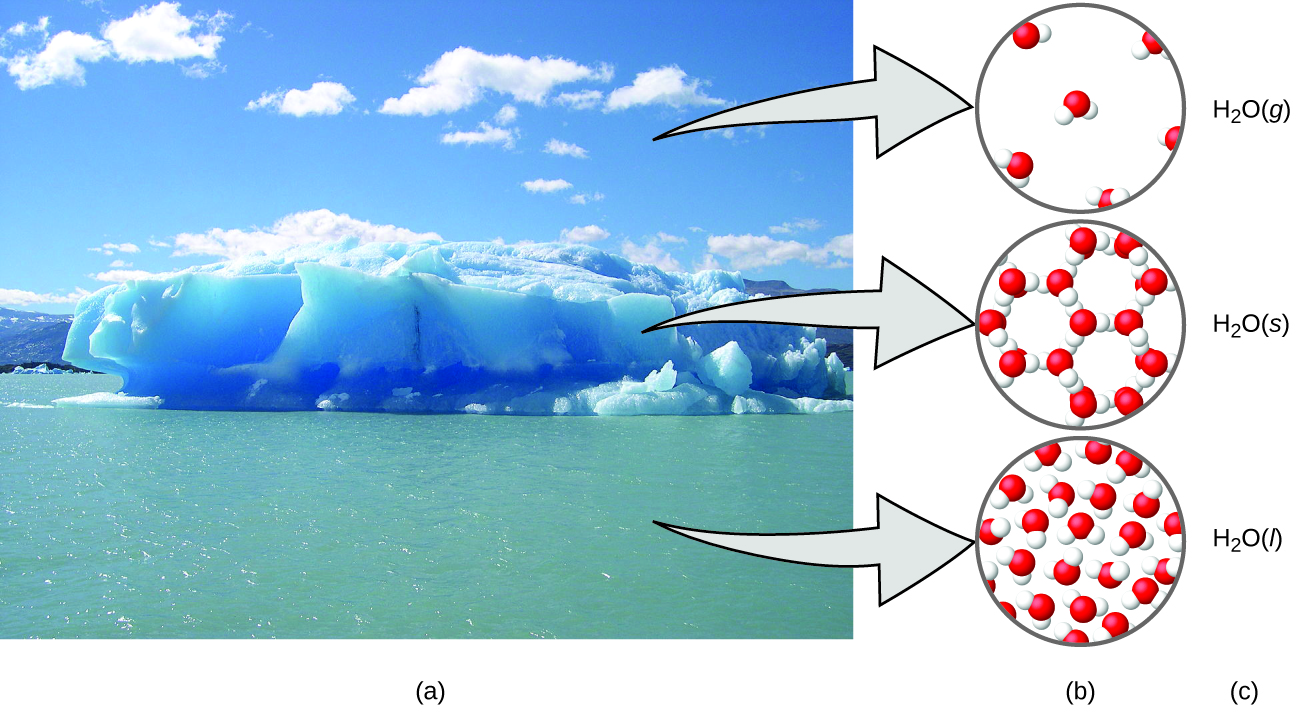 Chemistry deals with the composition, structure, and properties of matter, and the ways by which various forms of matter may be interconverted. Thus, it occupies a central place in the study and practice of science and technology. Chemists use the scientific method to perform experiments, pose hypotheses, and formulate laws and develop theories, so that they can better understand the behavior of the natural world. To do so, they operate in the macroscopic, microscopic, and symbolic domains. Chemists measure, analyze, purify, and synthesize a wide variety of substances that are important to our lives.

Explain how you could experimentally determine whether the outside temperature is higher or lower than 0 °C (32 °F) without using a thermometer.

Place a glass of water outside. It will freeze if the temperature is below 0 °C.

Identify each of the following statements as being most similar to a hypothesis, a law, or a theory. Explain your reasoning.

(a) Falling barometric pressure precedes the onset of bad weather.

(b) All life on earth has evolved from a common, primitive organism through the process of natural selection.

(c) My truck’s gas mileage has dropped significantly, probably because it’s due for a tune-up.

Identify each of the following statements as being most similar to a hypothesis, a law, or a theory. Explain your reasoning.

(a) The pressure of a sample of gas is directly proportional to the temperature of the gas.

(b) Matter consists of tiny particles that can combine in specific ratios to form substances with specific properties.

(c) At a higher temperature, solids (such as salt or sugar) will dissolve better in water.

(a) law (states a consistently observed phenomenon, can be used for prediction); (b) theory (a widely accepted explanation of the behavior of matter); (c) hypothesis (a tentative explanation, can be investigated by experimentation)

(b) The mass of a certain chlorine atom is 35 amu.

(c) A bottle with a label that reads Al contains aluminum metal.

(d) Al is the symbol for an aluminum atom.

(a) A certain molecule contains one H atom and one Cl atom.

(d) A sulfur molecule is composed of eight sulfur atoms.

According to one theory, the pressure of a gas increases as its volume decreases because the molecules in the gas have to move a shorter distance to hit the walls of the container. Does this theory follow a macroscopic or microscopic description of chemical behavior? Explain your answer.

Macroscopic. The heat required is determined from macroscopic properties.

chemistry
study of the composition, properties, and interactions of matter

law
statement that summarizes a vast number of experimental observations, and describes or predicts some aspect of the natural world