Electrochemical cells in which spontaneous redox reactions take place (galvanic cells) have been the topic of discussion so far in this chapter. In these cells, electrical work is done by a redox system on its surroundings as electrons produced by the redox reaction are transferred through an external circuit. This final section of the chapter will address an alternative scenario in which an external circuit does work on a redox system by imposing a voltage sufficient to drive an otherwise nonspontaneous reaction, a process known as electrolysis. A familiar example of electrolysis is recharging a battery, which involves use of an external power source to drive the spontaneous (discharge) cell reaction in the reverse direction, restoring to some extent the composition of the half-cells and the voltage of the battery. Perhaps less familiar is the use of electrolysis in the refinement of metallic ores, the manufacture of commodity chemicals, and the electroplating of metallic coatings on various products (e.g., jewelry, utensils, auto parts). To illustrate the essential concepts of electrolysis, a few specific processes will be considered.

The Electrolysis of Molten Sodium Chloride

Metallic sodium, Na, and chlorine gas, Cl2, are used in numerous applications, and their industrial production relies on the large-scale electrolysis of molten sodium chloride, NaCl(l). The industrial process typically uses a Downs cell similar to the simplified illustration shown in (Figure). The reactions associated with this process are:

The cell potential for the above process is negative, indicating the reaction as written (decomposition of liquid NaCl) is not spontaneous. To force this reaction, a positive potential of magnitude greater than the negative cell potential must be applied to the cell.

Cells of this sort (a cell for the electrolysis of molten sodium chloride) are used in the Downs process for production of sodium and chlorine, and they typically use iron cathodes and carbon anodes. 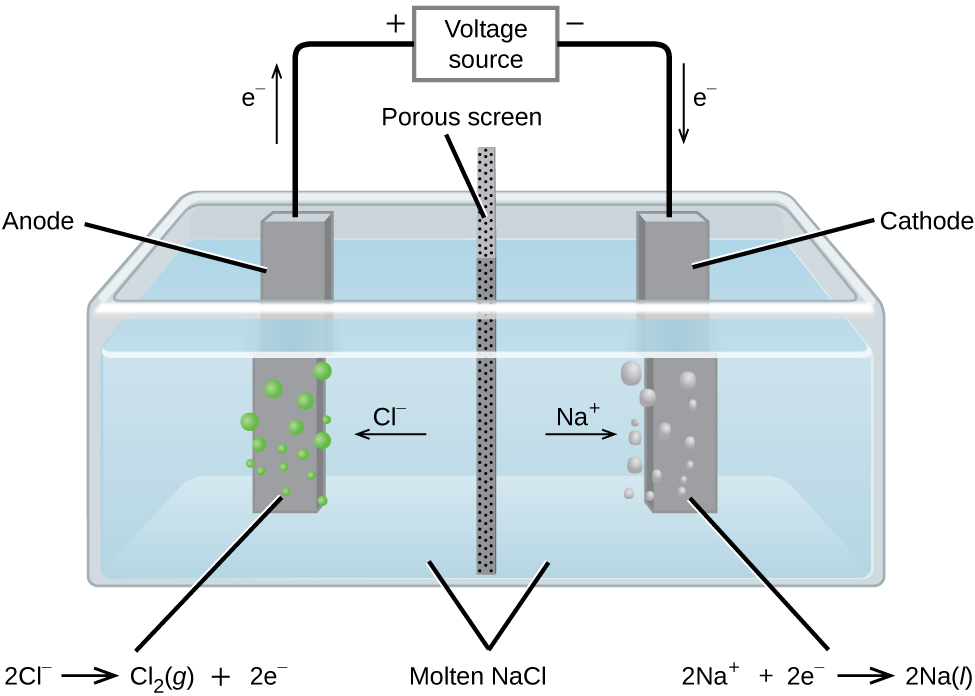 The Electrolysis of Water

Water may be electrolytically decomposed in a cell similar to the one illustrated in (Figure). To improve electrical conductivity without introducing a different redox species, the hydrogen ion concentration of the water is typically increased by addition of a strong acid. The redox processes associated with this cell are

Again, the cell potential as written is negative, indicating a nonspontaneous cell reaction that must be driven by imposing a cell voltage greater than +1.229 V. Keep in mind that standard electrode potentials are used to inform thermodynamic predictions here, though the cell is not operating under standard state conditions. Therefore, at best, calculated cell potentials should be considered ballpark estimates.

The electrolysis of water produces stoichiometric amounts of oxygen gas at the anode and hydrogen at the anode. 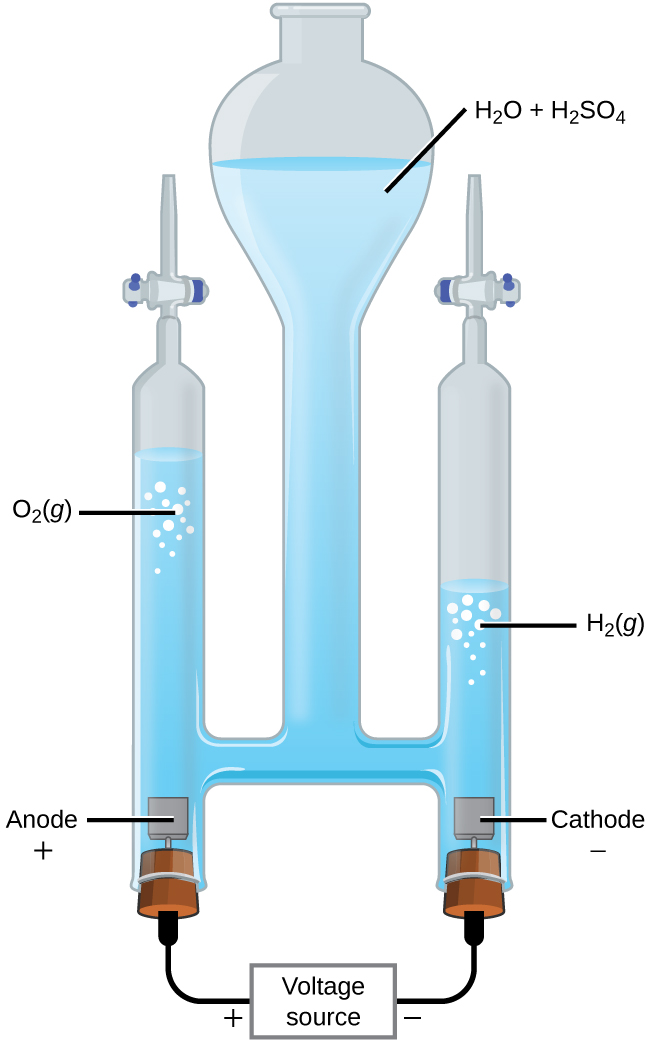 The Electrolysis of Aqueous Sodium Chloride

When aqueous solutions of ionic compounds are electrolyzed, the anode and cathode half-reactions may involve the electrolysis of either water species (H2O, H+, OH–) or solute species (the cations and anions of the compound). As an example, the electrolysis of aqueous sodium chloride could involve either of these two anode reactions:

The standard electrode (reduction) potentials of these two half-reactions indicate water may be oxidized at a less negative/more positive potential (–1.229 V) than chloride ion (–1.358 V). Thermodynamics thus predicts that water would be more readily oxidized, though in practice it is observed that both water and chloride ion are oxidized under typical conditions, producing a mixture of oxygen and chlorine gas.

Turning attention to the cathode, the possibilities for reduction are:

Comparison of these standard half-reaction potentials suggests the reduction of hydrogen ion is thermodynamically favored. However, in a neutral aqueous sodium chloride solution, the concentration of hydrogen ion is far below the standard state value of 1 M (approximately 10-7M), and so the observed cathode reaction is actually reduction of water. The net cell reaction in this case is then

This electrolysis reaction is part of the chlor-alkali process used by industry to produce chlorine and sodium hydroxide (lye).

An important use for electrolytic cells is in electroplating. Electroplating results in a thin coating of one metal on top of a conducting surface. Reasons for electroplating include making the object more corrosion resistant, strengthening the surface, producing a more attractive finish, or for purifying metal. The metals commonly used in electroplating include cadmium, chromium, copper, gold, nickel, silver, and tin. Common consumer products include silver-plated or gold-plated tableware, chrome-plated automobile parts, and jewelry. The silver plating of eating utensils is used here to illustrate the process. ((Figure)). 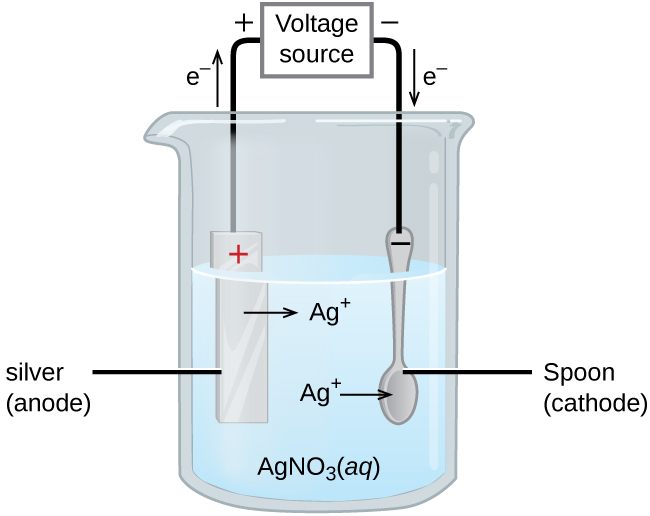 In the figure, the anode consists of a silver electrode, shown on the left. The cathode is located on the right and is the spoon, which is made from inexpensive metal. Both electrodes are immersed in a solution of silver nitrate. Applying a sufficient potential results in the oxidation of the silver anode

and reduction of silver ion at the (spoon) cathode:

The net result is the transfer of silver metal from the anode to the cathode. Several experimental factors must be carefully controlled to obtain high-quality silver coatings, including the exact composition of the electrolyte solution, the cell voltage applied, and the rate of the electrolysis reaction (electrical current).

Electrical current is defined as the rate of flow for any charged species. Most relevant to this discussion is the flow of electrons. Current is measured in a composite unit called an ampere, defined as one coulomb per second (A = 1 C/s). The charge transferred, Q, by passage of a constant current, I, over a specified time interval, t, is then given by the simple mathematical product

When electrons are transferred during a redox process, the stoichiometry of the reaction may be used to derive the total amount of (electronic) charge involved. For example, the generic reduction process

involves the transfer of n mole of electrons. The charge transferred is, therefore,

where F is Faraday’s constant, the charge in coulombs for one mole of electrons. If the reaction takes place in an electrochemical cell, the current flow is conveniently measured, and it may be used to assist in stoichiometric calculations related to the cell reaction.

Converting Current to Moles of Electrons In one process used for electroplating silver, a current of 10.23 A was passed through an electrolytic cell for exactly 1 hour. How many moles of electrons passed through the cell? What mass of silver was deposited at the cathode from the silver nitrate solution?

Solution Faraday’s constant can be used to convert the charge (Q) into moles of electrons (n). The charge is the current (I) multiplied by the time

From the problem, the solution contains AgNO3, so the reaction at the cathode involves 1 mole of electrons for each mole of silver

Check Your Learning Aluminum metal can be made from aluminum(III) ions by electrolysis. What is the half-reaction at the cathode? What mass of aluminum metal would be recovered if a current of 25.0 A passed through the solution for 15.0 minutes?

Time Required for Deposition In one application, a 0.010-mm layer of chromium must be deposited on a part with a total surface area of 3.3 m2 from a solution of containing chromium(III) ions. How long would it take to deposit the layer of chromium if the current was 33.46 A? The density of chromium (metal) is 7.19 g/cm3.

Solution First, compute the volume of chromium that must be produced (equal to the product of surface area and thickness):

Use the computed volume and the provided density to calculate the molar amount of chromium required:

The stoichiometry of the chromium(III) reduction process requires three moles of electrons for each mole of chromium(0) produced, and so the total charge required is:

Check Your Learning What mass of zinc is required to galvanize the top of a 3.00 m

Nonspontaneous redox processes may be forced to occur in electrochemical cells by the application of an appropriate potential using an external power source—a process known as electrolysis. Electrolysis is the basis for certain ore refining processes, the industrial production of many chemical commodities, and the electroplating of metal coatings on various products. Measurement of the current flow during electrolysis permits stoichiometric calculations.

If a 2.5 A current flows through a circuit for 35 minutes, how many coulombs of charge moved through the circuit?

For the scenario in the previous question, how many electrons moved through the circuit?

Write the half-reactions and cell reaction occurring during electrolysis of each molten salt below.

What mass of each product is produced in each of the electrolytic cells of the previous problem if a total charge of 3.33

105 C passes through each cell?

How long would it take to reduce 1 mole of each of the following ions using the current indicated?

A current of 2.345 A passes through the cell shown in (Figure) for 45 minutes. What is the volume of the hydrogen collected at room temperature if the pressure is exactly 1 atm? (Hint: Is hydrogen the only gas present above the water?)

An irregularly shaped metal part made from a particular alloy was galvanized with zinc using a Zn(NO3)2 solution. When a current of 2.599 A was used, it took exactly 1 hour to deposit a 0.01123-mm layer of zinc on the part. What was the total surface area of the part? The density of zinc is 7.140 g/cm3.