The number in the measurement can be represented in different ways, including decimal form and scientific notation. (Scientific notation is also known as exponential notation; a review of this topic can be found in Appendix B.) For example, the maximum takeoff weight of a Boeing 777-200ER airliner is 298,000 kilograms, which can also be written as 2.98

Units, such as liters, pounds, and centimeters, are standards of comparison for measurements. A 2-liter bottle of a soft drink contains a volume of beverage that is twice that of the accepted volume of 1 liter. The meat used to prepare a 0.25-pound hamburger weighs one-fourth as much as the accepted weight of 1 pound. Without units, a number can be meaningless, confusing, or possibly life threatening. Suppose a doctor prescribes phenobarbital to control a patient’s seizures and states a dosage of “100” without specifying units. Not only will this be confusing to the medical professional giving the dose, but the consequences can be dire: 100 mg given three times per day can be effective as an anticonvulsant, but a single dose of 100 g is more than 10 times the lethal amount.

The measurement units for seven fundamental properties (“base units”) are listed in (Figure). The standards for these units are fixed by international agreement, and they are called the International System of Units or SI Units (from the French, Le Système International d’Unités). SI units have been used by the United States National Institute of Standards and Technology (NIST) since 1964. Units for other properties may be derived from these seven base units.

Everyday measurement units are often defined as fractions or multiples of other units. Milk is commonly packaged in containers of 1 gallon (4 quarts), 1 quart (0.25 gallon), and one pint (0.5 quart). This same approach is used with SI units, but these fractions or multiples are always powers of 10. Fractional or multiple SI units are named using a prefix and the name of the base unit. For example, a length of 1000 meters is also called a kilometer because the prefix kilo means “one thousand,” which in scientific notation is 103 (1 kilometer = 1000 m = 103 m). The prefixes used and the powers to which 10 are raised are listed in (Figure).

The initial units of the metric system, which eventually evolved into the SI system, were established in France during the French Revolution. The original standards for the meter and the kilogram were adopted there in 1799 and eventually by other countries. This section introduces four of the SI base units commonly used in chemistry. Other SI units will be introduced in subsequent chapters.

The standard unit of mass in the SI system is the kilogram (kg). The kilogram was previously defined by the International Union of Pure and Applied Chemistry (IUPAC) as the mass of a specific reference object. This object was originally one liter of pure water, and more recently it was a metal cylinder made from a platinum-iridium alloy with a height and diameter of 39 mm ((Figure)). In May 2019, this definition was changed to one that is based instead on precisely measured values of several fundamental physical constants.1. One kilogram is about 2.2 pounds. The gram (g) is exactly equal to 1/1000 of the mass of the kilogram (10−3 kg). 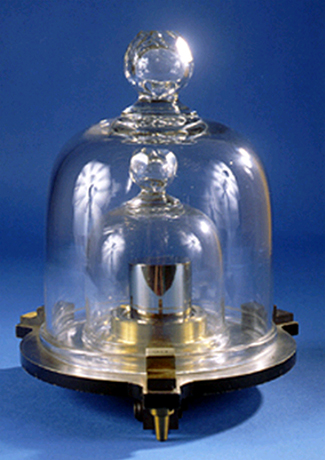 Temperature is an intensive property. The SI unit of temperature is the kelvin (K). The IUPAC convention is to use kelvin (all lowercase) for the word, K (uppercase) for the unit symbol, and neither the word “degree” nor the degree symbol (°). The degree Celsius (°C) is also allowed in the SI system, with both the word “degree” and the degree symbol used for Celsius measurements. Celsius degrees are the same magnitude as those of kelvin, but the two scales place their zeros in different places. Water freezes at 273.15 K (0 °C) and boils at 373.15 K (100 °C) by definition, and normal human body temperature is approximately 310 K (37 °C). The conversion between these two units and the Fahrenheit scale will be discussed later in this chapter.

The SI base unit of time is the second (s). Small and large time intervals can be expressed with the appropriate prefixes; for example, 3 microseconds = 0.000003 s = 3

106 s. Alternatively, hours, days, and years can be used. 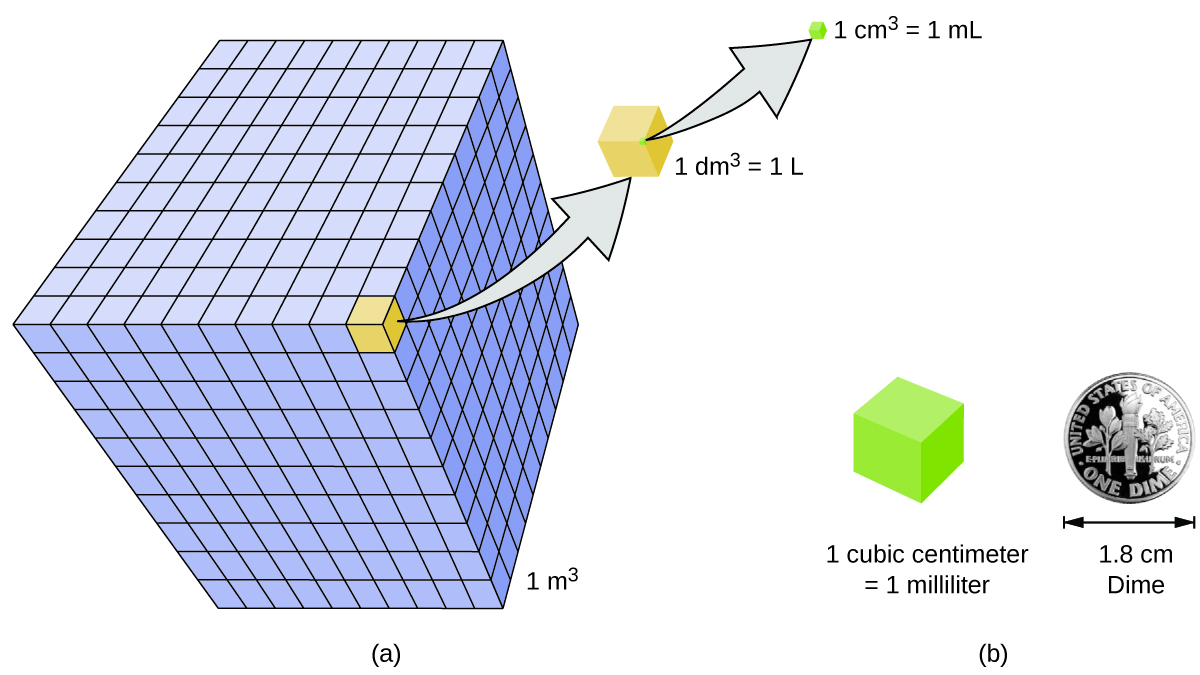 We use the mass and volume of a substance to determine its density. Thus, the units of density are defined by the base units of mass and length.

While there are many ways to determine the density of an object, perhaps the most straightforward method involves separately finding the mass and volume of the object, and then dividing the mass of the sample by its volume. In the following example, the mass is found directly by weighing, but the volume is found indirectly through length measurements.

Calculation of Density Gold—in bricks, bars, and coins—has been a form of currency for centuries. In order to swindle people into paying for a brick of gold without actually investing in a brick of gold, people have considered filling the centers of hollow gold bricks with lead to fool buyers into thinking that the entire brick is gold. It does not work: Lead is a dense substance, but its density is not as great as that of gold, 19.3 g/cm3. What is the density of lead if a cube of lead has an edge length of 2.00 cm and a mass of 90.7 g?

Solution The density of a substance can be calculated by dividing its mass by its volume. The volume of a cube is calculated by cubing the edge length.

(We will discuss the reason for rounding to the first decimal place in the next section.)

Check Your Learning (a) To three decimal places, what is the volume of a cube (cm3) with an edge length of 0.843 cm?

To learn more about the relationship between mass, volume, and density, use this interactive simulator to explore the density of different materials, like wood, ice, brick, and aluminum.

Using Displacement of Water to Determine Density This PhET simulation illustrates another way to determine density, using displacement of water. Determine the density of the red and yellow blocks.

Solution When you open the density simulation and select Same Mass, you can choose from several 5.00-kg colored blocks that you can drop into a tank containing 100.00 L water. The yellow block floats (it is less dense than water), and the water level rises to 105.00 L. While floating, the yellow block displaces 5.00 L water, an amount equal to the weight of the block. The red block sinks (it is more dense than water, which has density = 1.00 kg/L), and the water level rises to 101.25 L.

The red block therefore displaces 1.25 L water, an amount equal to the volume of the block. The density of the red block is:

Note that since the yellow block is not completely submerged, you cannot determine its density from this information. But if you hold the yellow block on the bottom of the tank, the water level rises to 110.00 L, which means that it now displaces 10.00 L water, and its density can be found:

Check Your Learning Remove all of the blocks from the water and add the green block to the tank of water, placing it approximately in the middle of the tank. Determine the density of the green block.

Measurements provide quantitative information that is critical in studying and practicing chemistry. Each measurement has an amount, a unit for comparison, and an uncertainty. Measurements can be represented in either decimal or scientific notation. Scientists primarily use SI (International System) units such as meters, seconds, and kilograms, as well as derived units, such as liters (for volume) and g/cm3 (for density). In many cases, it is convenient to use prefixes that yield fractional and multiple units, such as microseconds (10−6 seconds) and megahertz (106 hertz), respectively.

Is one liter about an ounce, a pint, a quart, or a gallon?

Indicate the SI base units or derived units that are appropriate for the following measurements:

(b) the mass of an automobile

(c) the volume of a swimming pool

(d) the speed of an airplane

(e) the density of gold

(f) the area of a football field

Indicate the SI base units or derived units that are appropriate for the following measurements:

(a) the mass of the moon

(b) the distance from Dallas to Oklahoma City

(c) the speed of sound

(d) the density of air

(e) the temperature at which alcohol boils

(f) the area of the state of Delaware

(g) the volume of a flu shot or a measles vaccination

Give the name and symbol of the prefixes used with SI units to indicate multiplication by the following exact quantities.

Give the name of the prefix and the quantity indicated by the following symbols that are used with SI base units.

(a) Determine the density of this piece of jewelry.

(b) Assuming that the jewelry is made from only one substance, what substance is it likely to be? Explain.

(a) What are the mass, volume, and density of the yellow block?

(b) What are the mass, volume and density of the red block?

(c) List the block colors in order from smallest to largest mass.

(d) List the block colors in order from lowest to highest density.

(e) How are mass and density related for blocks of the same volume?

Visit this PhET density simulation and select Custom Blocks and then My Block.

(a) Enter mass and volume values for the block such that the mass in kg is less than the volume in L. What does the block do? Why? Is this always the case when mass < volume?

(b) Enter mass and volume values for the block such that the mass in kg is more than the volume in L. What does the block do? Why? Is this always the case when mass > volume?

(c) How would (a) and (b) be different if the liquid in the tank were ethanol instead of water?

(d) How would (a) and (b) be different if the liquid in the tank were mercury instead of water?

(a) Pick one of the Mystery Blocks and determine its mass, volume, density, and its likely identity.

(b) Pick a different Mystery Block and determine its mass, volume, density, and its likely identity.

(c) Order the Mystery Blocks from least dense to most dense. Explain.

density
ratio of mass to volume for a substance or object

length
measure of one dimension of an object

unit
standard of comparison for measurements

volume
amount of space occupied by an object