The characteristics that distinguish one substance from another are called properties. A physical property is a characteristic of matter that is not associated with a change in its chemical composition. Familiar examples of physical properties include density, color, hardness, melting and boiling points, and electrical conductivity. Some physical properties, such as density and color, may be observed without changing the physical state of the matter. Other physical properties, such as the melting temperature of iron or the freezing temperature of water, can only be observed as matter undergoes a physical change. A physical change is a change in the state or properties of matter without any accompanying change in the chemical identities of the substances contained in the matter. Physical changes are observed when wax melts, when sugar dissolves in coffee, and when steam condenses into liquid water ((Figure)). Other examples of physical changes include magnetizing and demagnetizing metals (as is done with common antitheft security tags) and grinding solids into powders (which can sometimes yield noticeable changes in color). In each of these examples, there is a change in the physical state, form, or properties of the substance, but no change in its chemical composition.

The change of one type of matter into another type (or the inability to change) is a chemical property. Examples of chemical properties include flammability, toxicity, acidity, and many other types of reactivity. Iron, for example, combines with oxygen in the presence of water to form rust; chromium does not oxidize ((Figure)). Nitroglycerin is very dangerous because it explodes easily; neon poses almost no hazard because it is very unreactive. 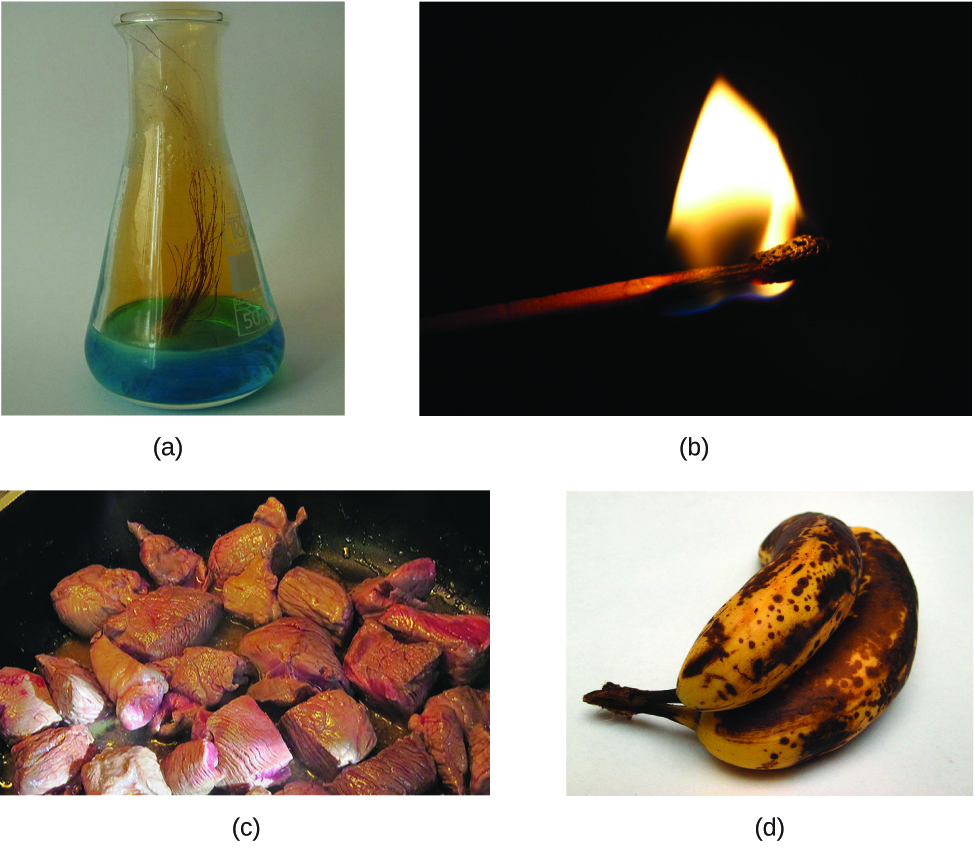 You may have seen the symbol shown in (Figure) on containers of chemicals in a laboratory or workplace. Sometimes called a “fire diamond” or “hazard diamond,” this chemical hazard diamond provides valuable information that briefly summarizes the various dangers of which to be aware when working with a particular substance. 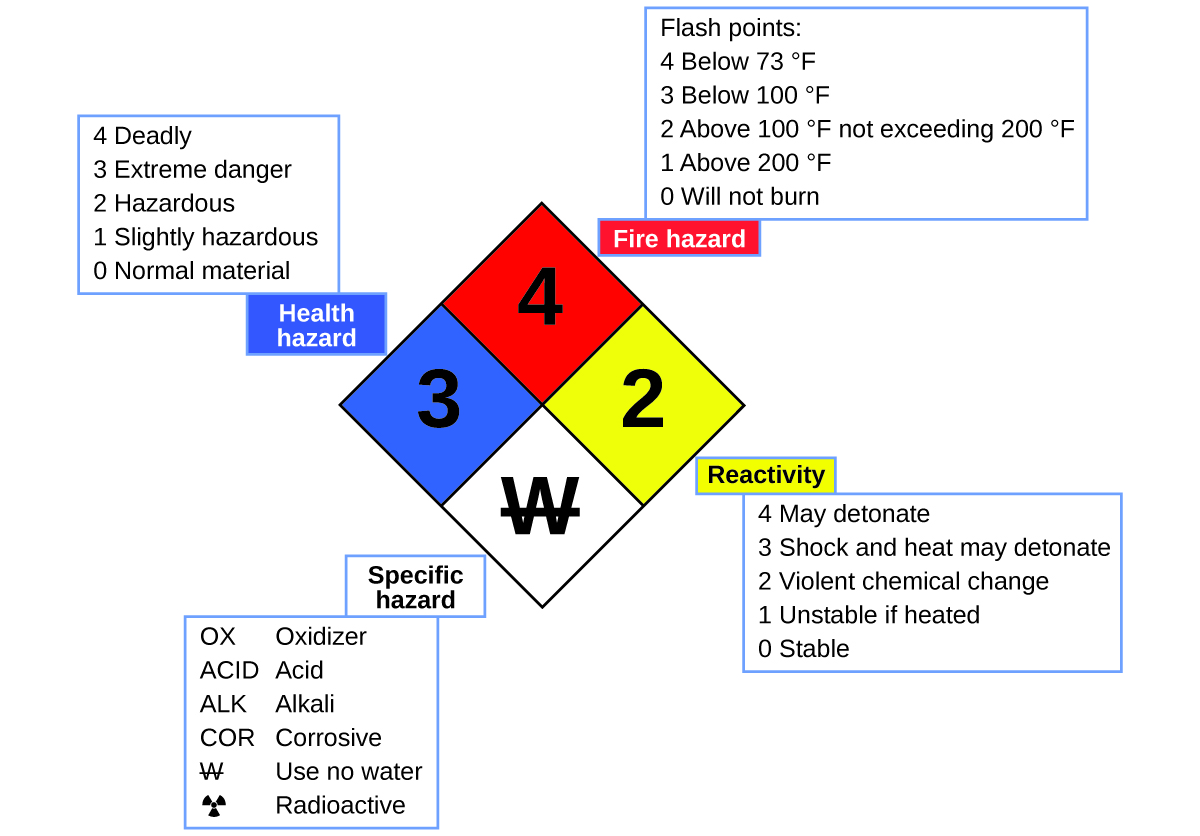 The National Fire Protection Agency (NFPA) 704 Hazard Identification System was developed by NFPA to provide safety information about certain substances. The system details flammability, reactivity, health, and other hazards. Within the overall diamond symbol, the top (red) diamond specifies the level of fire hazard (temperature range for flash point). The blue (left) diamond indicates the level of health hazard. The yellow (right) diamond describes reactivity hazards, such as how readily the substance will undergo detonation or a violent chemical change. The white (bottom) diamond points out special hazards, such as if it is an oxidizer (which allows the substance to burn in the absence of air/oxygen), undergoes an unusual or dangerous reaction with water, is corrosive, acidic, alkaline, a biological hazard, radioactive, and so on. Each hazard is rated on a scale from 0 to 4, with 0 being no hazard and 4 being extremely hazardous.

The periodic table shows how elements may be grouped according to certain similar properties. Note the background color denotes whether an element is a metal, metalloid, or nonmetal, whereas the element symbol color indicates whether it is a solid, liquid, or gas. 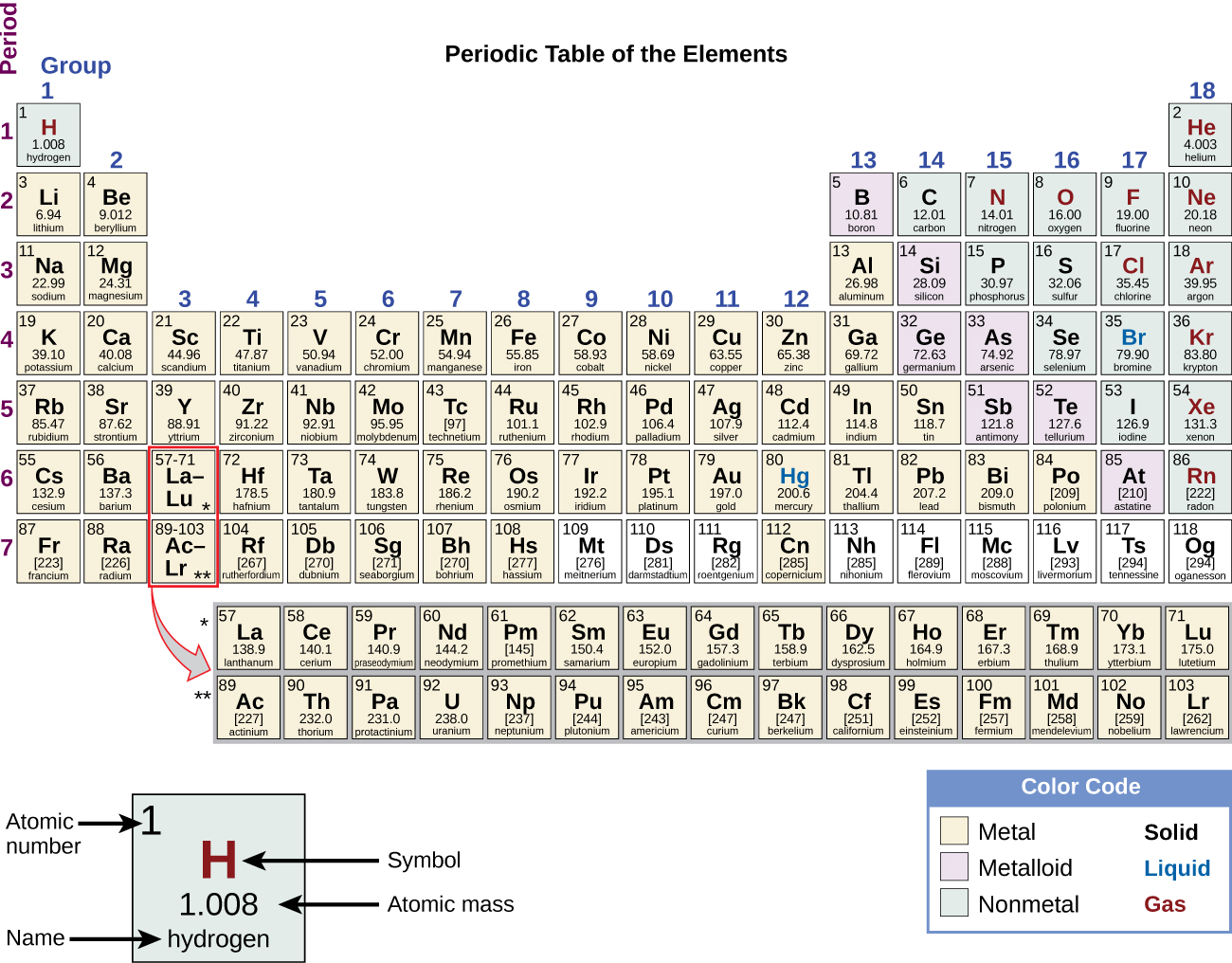 Classify the six underlined properties in the following paragraph as chemical or physical:

Fluorine is a pale yellow gas that reacts with most substances. The free element melts at −220 °C and boils at −188 °C. Finely divided metals burn in fluorine with a bright flame. Nineteen grams of fluorine will react with 1.0 gram of hydrogen.

Classify each of the following changes as physical or chemical:

(a) condensation of steam

(b) burning of gasoline

(d) dissolving of sugar in water

Classify each of the following changes as physical or chemical:

(d) explosion of a firecracker

(e) magnetizing of a screwdriver

The volume of a sample of oxygen gas changed from 10 mL to 11 mL as the temperature changed. Is this a chemical or physical change?

A 2.0-liter volume of hydrogen gas combined with 1.0 liter of oxygen gas to produce 2.0 liters of water vapor. Does oxygen undergo a chemical or physical change?

Identify the following properties as either extensive or intensive.

The density (d) of a substance is an intensive property that is defined as the ratio of its mass (m) to its volume (V).

Considering that mass and volume are both extensive properties, explain why their ratio, density, is intensive.

Being extensive properties, both mass and volume are directly proportional to the amount of substance under study. Dividing one extensive property by another will in effect “cancel” this dependence on amount, yielding a ratio that is independent of amount (an intensive property).