Processes have a natural tendency to occur in one direction under a given set of conditions. Water will naturally flow downhill, but uphill flow requires outside intervention such as the use of a pump. Iron exposed to the earth’s atmosphere will corrode, but rust is not converted to iron without intentional chemical treatment. A spontaneous process is one that occurs naturally under certain conditions. A nonspontaneous process, on the other hand, will not take place unless it is “driven” by the continual input of energy from an external source. A process that is spontaneous in one direction under a particular set of conditions is nonspontaneous in the reverse direction. At room temperature and typical atmospheric pressure, for example, ice will spontaneously melt, but water will not spontaneously freeze.

The spontaneity of a process is not correlated to the speed of the process. A spontaneous change may be so rapid that it is essentially instantaneous or so slow that it cannot be observed over any practical period of time. To illustrate this concept, consider the decay of radioactive isotopes, a topic more thoroughly treated in the chapter on nuclear chemistry. Radioactive decay is by definition a spontaneous process in which the nuclei of unstable isotopes emit radiation as they are converted to more stable nuclei. All the decay processes occur spontaneously, but the rates at which different isotopes decay vary widely. Technetium-99m is a popular radioisotope for medical imaging studies that undergoes relatively rapid decay and exhibits a half-life of about six hours. Uranium-238 is the most abundant isotope of uranium, and its decay occurs much more slowly, exhibiting a half-life of more than four billion years ((Figure)).

Both U-238 and Tc-99m undergo spontaneous radioactive decay, but at drastically different rates. Over the course of one week, essentially all of a Tc-99m sample and none of a U-238 sample will have decayed. 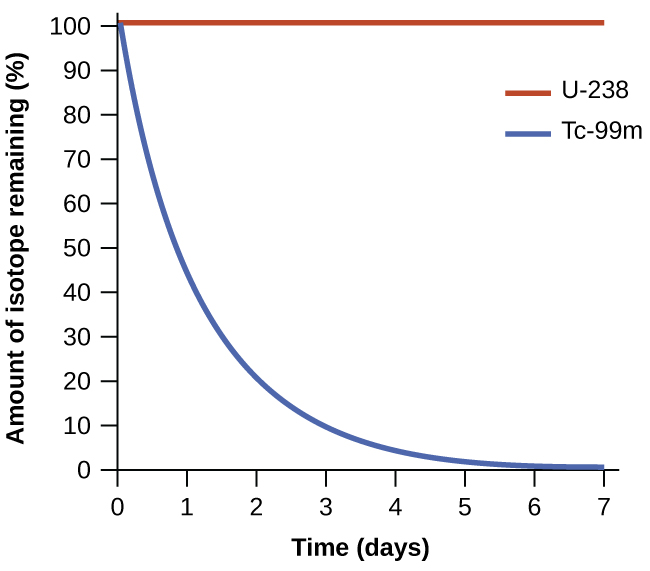 As another example, consider the conversion of diamond into graphite ((Figure)).

The phase diagram for carbon indicates that graphite is the stable form of this element under ambient atmospheric pressure, while diamond is the stable allotrope at very high pressures, such as those present during its geologic formation. Thermodynamic calculations of the sort described in the last section of this chapter indicate that the conversion of diamond to graphite at ambient pressure occurs spontaneously, yet diamonds are observed to exist, and persist, under these conditions. Though the process is spontaneous under typical ambient conditions, its rate is extremely slow; so, for all practical purposes diamonds are indeed “forever.” Situations such as these emphasize the important distinction between the thermodynamic and the kinetic aspects of a process. In this particular case, diamonds are said to be thermodynamically unstable but kinetically stable under ambient conditions.

The conversion of carbon from the diamond allotrope to the graphite allotrope is spontaneous at ambient pressure, but its rate is immeasurably slow at low to moderate temperatures. This process is known as graphitization, and its rate can be increased to easily measurable values at temperatures in the 1000–2000 K range. (credit “diamond” photo: modification of work by “Fancy Diamonds”/Flickr; credit “graphite” photo: modificaton of work by images-of-elements.com/carbon.php) 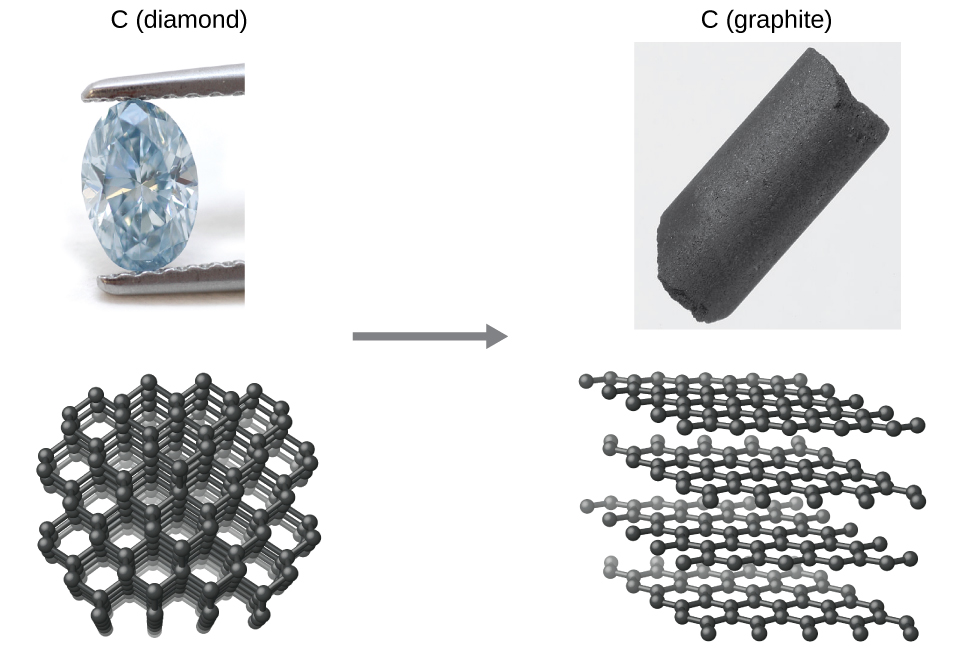 Dispersal of Matter and Energy

Extending the discussion of thermodynamic concepts toward the objective of predicting spontaneity, consider now an isolated system consisting of two flasks connected with a closed valve. Initially there is an ideal gas in one flask and the other flask is empty (P = 0). ((Figure)). When the valve is opened, the gas spontaneously expands to fill both flasks equally. Recalling the definition of pressure-volume work from the chapter on thermochemistry, note that no work has been done because the pressure in a vacuum is zero.

Note as well that since the system is isolated, no heat has been exchanged with the surroundings (q = 0). The first law of thermodynamics confirms that there has been no change in the system’s internal energy as a result of this process.

The spontaneity of this process is therefore not a consequence of any change in energy that accompanies the process. Instead, the driving force appears to be related to the greater, more uniform dispersal of matter that results when the gas is allowed to expand. Initially, the system was comprised of one flask containing matter and another flask containing nothing. After the spontaneous expansion took place, the matter was distributed both more widely (occupying twice its original volume) and more uniformly (present in equal amounts in each flask).

An isolated system consists of an ideal gas in one flask that is connected by a closed valve to a second flask containing a vacuum. Once the valve is opened, the gas spontaneously becomes evenly distributed between the flasks.

From the perspective of this two-object system, there was no net gain or loss of thermal energy, rather the available thermal energy was redistributed among the two objects. This spontaneous process resulted in a more uniform dispersal of energy.

When two objects at different temperatures come in contact, heat spontaneously flows from the hotter to the colder object.

Redistribution of Matter during a Spontaneous Process Describe how matter is redistributed when the following spontaneous processes take place:

(a) A solid sublimes.

(b) A gas condenses.

(c) A drop of food coloring added to a glass of water forms a solution with uniform color.

(a) Sublimation is the conversion of a solid (relatively high density) to a gas (much lesser density). This process yields a much greater dispersal of matter, since the molecules will occupy a much greater volume after the solid-to-gas transition.

(b) Condensation is the conversion of a gas (relatively low density) to a liquid (much greater density). This process yields a much lesser dispersal of matter, since the molecules will occupy a much lesser volume after the gas-to-liquid transition.

Check Your Learning Describe how energy is redistributed when a spoon at room temperature is placed in a cup of hot coffee.

Heat will spontaneously flow from the hotter object (coffee) to the colder object (spoon), resulting in a more uniform distribution of thermal energy as the spoon warms and the coffee cools.

What is a spontaneous reaction?

A reaction has a natural tendency to occur and takes place without the continual input of energy from an external source.

What is a nonspontaneous reaction?

Indicate whether the following processes are spontaneous or nonspontaneous.

(a) Liquid water freezing at a temperature below its freezing point

(b) Liquid water freezing at a temperature above its freezing point

(c) The combustion of gasoline

(d) A ball thrown into the air

(e) A raindrop falling to the ground

A helium-filled balloon spontaneously deflates overnight as He atoms diffuse through the wall of the balloon. Describe the redistribution of matter and/or energy that accompanies this process.

Many plastic materials are organic polymers that contain carbon and hydrogen. The oxidation of these plastics in air to form carbon dioxide and water is a spontaneous process; however, plastic materials tend to persist in the environment. Explain.

Although the oxidation of plastics is spontaneous, the rate of oxidation is very slow. Plastics are therefore kinetically stable and do not decompose appreciably even over relatively long periods of time.