The gas laws that we have seen to this point, as well as the ideal gas equation, are empirical, that is, they have been derived from experimental observations. The mathematical forms of these laws closely describe the macroscopic behavior of most gases at pressures less than about 1 or 2 atm. Although the gas laws describe relationships that have been verified by many experiments, they do not tell us why gases follow these relationships.

The kinetic molecular theory (KMT) is a simple microscopic model that effectively explains the gas laws described in previous modules of this chapter. This theory is based on the following five postulates described here. (Note: The term “molecule” will be used to refer to the individual chemical species that compose the gas, although some gases are composed of atomic species, for example, the noble gases.)

The test of the KMT and its postulates is its ability to explain and describe the behavior of a gas. The various gas laws can be derived from the assumptions of the KMT, which have led chemists to believe that the assumptions of the theory accurately represent the properties of gas molecules. We will first look at the individual gas laws (Boyle’s, Charles’s, Amontons’s, Avogadro’s, and Dalton’s laws) conceptually to see how the KMT explains them. Then, we will more carefully consider the relationships between molecular masses, speeds, and kinetic energies with temperature, and explain Graham’s law.

The Kinetic-Molecular Theory Explains the Behavior of Gases, Part I

Recalling that gas pressure is exerted by rapidly moving gas molecules and depends directly on the number of molecules hitting a unit area of the wall per unit of time, we see that the KMT conceptually explains the behavior of a gas as follows:

The previous discussion showed that the KMT qualitatively explains the behaviors described by the various gas laws. The postulates of this theory may be applied in a more quantitative fashion to derive these individual laws. To do this, we must first look at velocities and kinetic energies of gas molecules, and the temperature of a gas sample.

The molecular speed distribution for oxygen gas at 300 K is shown here. Very few molecules move at either very low or very high speeds. The number of molecules with intermediate speeds increases rapidly up to a maximum, which is the most probable speed, then drops off rapidly. Note that the most probable speed, νp, is a little less than 400 m/s, while the root mean square speed, urms, is closer to 500 m/s. 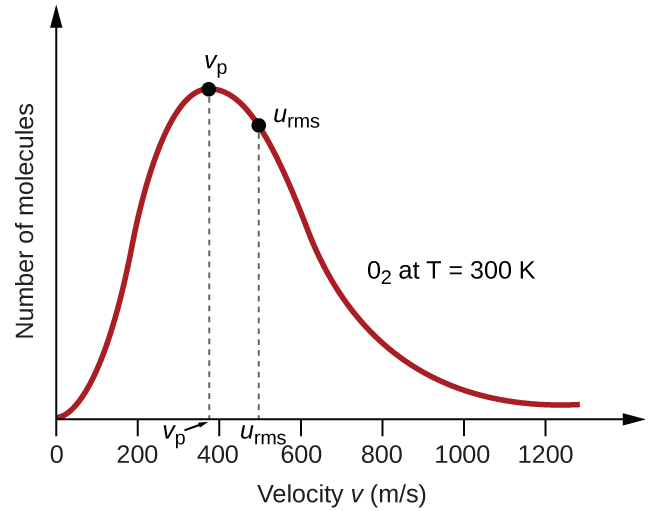 The kinetic energy (KE) of a particle of mass (m) and speed (u) is given by:

Expressing mass in kilograms and speed in meters per second will yield energy values in units of joules (J = kg m2 s–2). To deal with a large number of gas molecules, we use averages for both speed and kinetic energy. In the KMT, the root mean square velocity of a particle, urms, is defined as the square root of the average of the squares of the velocities with n = the number of particles:

The average kinetic energy for a mole of particles, KEavg, is then equal to:

where M is the molar mass expressed in units of kg/mol. The KEavg of a mole of gas molecules is also directly proportional to the temperature of the gas and may be described by the equation:

where R is the gas constant and T is the kelvin temperature. When used in this equation, the appropriate form of the gas constant is 8.314 J/mol⋅K (8.314 kg m2s–2mol–1K–1). These two separate equations for KEavg may be combined and rearranged to yield a relation between molecular speed and temperature:

Calculation of urmsCalculate the root-mean-square velocity for a nitrogen molecule at 30 °C.

Solution Convert the temperature into Kelvin:

Determine the molar mass of nitrogen in kilograms:

Replace the variables and constants in the root-mean-square velocity equation, replacing Joules with the equivalent kg m2s–2:

Check Your LearningCalculate the root-mean-square velocity for a mole of oxygen molecules at –23 °C. 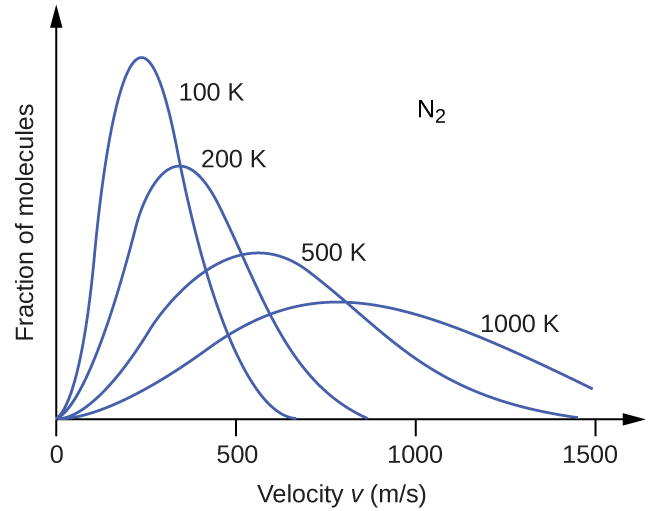 At a given temperature, all gases have the same KEavg for their molecules. Gases composed of lighter molecules have more high-speed particles and a higher urms, with a speed distribution that peaks at relatively higher velocities. Gases consisting of heavier molecules have more low-speed particles, a lower urms, and a speed distribution that peaks at relatively lower velocities. This trend is demonstrated by the data for a series of noble gases shown in (Figure).

Molecular velocity is directly related to molecular mass. At a given temperature, lighter molecules move faster on average than heavier molecules. 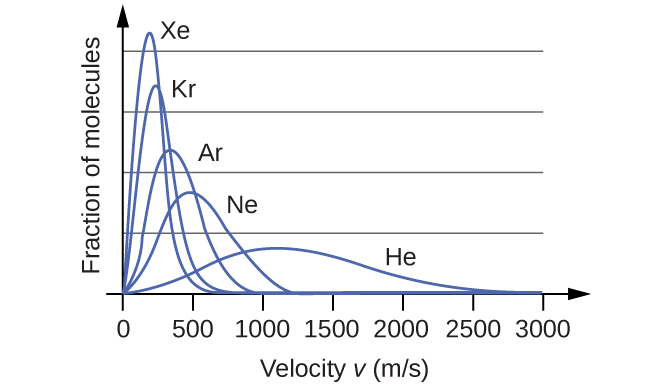 The gas simulator may be used to examine the effect of temperature on molecular velocities. Examine the simulator’s “energy histograms” (molecular speed distributions) and “species information” (which gives average speed values) for molecules of different masses at various temperatures.

The Kinetic-Molecular Theory Explains the Behavior of Gases, Part II

The rate of effusion of a gas depends directly on the (average) speed of its molecules:

Using this relation, and the equation relating molecular speed to mass, Graham’s law may be easily derived as shown here:

The ratio of the rates of effusion is thus derived to be inversely proportional to the ratio of the square roots of their masses. This is the same relation observed experimentally and expressed as Graham’s law.

The kinetic molecular theory is a simple but very effective model that effectively explains ideal gas behavior. The theory assumes that gases consist of widely separated molecules of negligible volume that are in constant motion, colliding elastically with one another and the walls of their container with average velocities determined by their absolute temperatures. The individual molecules of a gas exhibit a range of velocities, the distribution of these velocities being dependent on the temperature of the gas and the mass of its molecules.

Using the postulates of the kinetic molecular theory, explain why a gas uniformly fills a container of any shape.

Can the speed of a given molecule in a gas double at constant temperature? Explain your answer.

Yes. At any given instant, there are a range of values of molecular speeds in a sample of gas. Any single molecule can speed up or slow down as it collides with other molecules. The average velocity of all the molecules is constant at constant temperature.

Describe what happens to the average kinetic energy of ideal gas molecules when the conditions are changed as follows:

(a) The pressure of the gas is increased by reducing the volume at constant temperature.

(b) The pressure of the gas is increased by increasing the temperature at constant volume.

(c) The average velocity of the molecules is increased by a factor of 2.

H2O. Cooling slows the velocities of the He atoms, causing them to behave as though they were heavier.

(a) What effect do these changes have on the number of collisions of the molecules of the gas per unit area of the container wall?

(b) What is the effect on the average kinetic energy of the molecules?

(c) What is the effect on the root mean square speed of the molecules?

(a) The number of collisions per unit area of the container wall is constant. (b) The average kinetic energy doubles. (c) The root mean square speed increases to

times its initial value; urms is proportional to

(a) Is the pressure of the gas in the hot-air balloon shown at the opening of this chapter greater than, less than, or equal to that of the atmosphere outside the balloon?

(b) Is the density of the gas in the hot-air balloon shown at the opening of this chapter greater than, less than, or equal to that of the atmosphere outside the balloon?

(d) The average temperature of the gas in a hot-air balloon is 1.30

102 °F. Calculate its density, assuming the molar mass equals that of dry air.

105 ft3. What is the lifting power of such a balloon? If the weight of the balloon and its rigging is 500 pounds, what is its capacity for carrying passengers and cargo?

(g) A balloon carries 40.0 gallons of liquid propane (density 0.5005 g/L). What volume of CO2 and H2O gas is produced by the combustion of this propane?

(h) A balloon flight can last about 90 minutes. If all of the fuel is burned during this time, what is the approximate rate of heat loss (in kJ/min) from the hot air in the bag during the flight?