Before you get started, take this readiness quiz.

Solve Equations Using the Division and Multiplication Properties of Equality

Let’s look at our puzzle again with the envelopes and counters in (Figure). 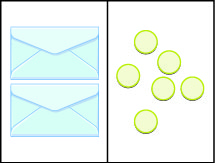 In the illustration there are two identical envelopes that contain the same number of counters. Remember, the left side of the workspace must equal the right side, but the counters on the left side are “hidden” in the envelopes. So how many counters are in each envelope?

How do we determine the number? We have to separate the counters on the right side into two groups of the same size to correspond with the two envelopes on the left side. The 6 counters divided into 2 equal groups gives 3 counters in each group (since

What equation models the situation shown in (Figure)? There are two envelopes, and each contains

counters. Together, the two envelopes must contain a total of 6 counters.

The illustration shows a model of the equation 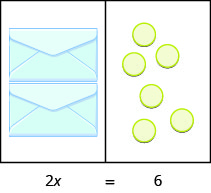 We found that each envelope contains 3 counters. Does this check? We know

, so it works! Three counters in each of two envelopes does equal six!

This example leads to the Division Property of Equality.

The Division Property of Equality

When you divide both sides of an equation by any non-zero number, you still have equality.

. We want to know what number divided by 4 gives 3. So to “undo” the division, we will need to multiply by 4. The Multiplication Property of Equality will allow us to do this. This property says that if we start with two equal quantities and multiply both by the same number, the results are equal.

The Multiplication Property of Equality

If you multiply both sides of an equation by the same number, you still have equality.

. We must multiply by

Since the product of a number and its reciprocal is 1, our strategy will be to isolate

by multiplying by the reciprocal of

Many equations start out more complicated than the ones we have been working with.

With these more complicated equations the first step is to simplify both sides of the equation as much as possible. This usually involves combining like terms or using the distributive property.

Begin by simplifying each side of the equation.

Here we will simplify each side of the equation by using the distributive property first.

Now we have covered all four properties of equality—subtraction, addition, division, and multiplication. We’ll list them all together here for easy reference.

When you add, subtract, multiply, or divide the same quantity from both sides of an equation, you still have equality.

In the next few examples, we will translate sentences into equations and then solve the equations. You might want to review the translation table in the previous chapter.

Translate and solve: The number 143 is the product of

divided by 7 is equal to

divided by 8 is equal to

Translate and solve: Three-fourths of

Begin by translating the sentence into an equation. Remember, “of” translates into multiplication.

Translate and solve: Two-fifths of

Translate and solve: Three-fourths of

Translate and solve: The sum of three-eighths and

Translate and solve: The sum of five-eighths and x is one-fourth.

Translate and solve: The sum of three-fourths and x is five-sixths.

To solve applications using the Division and Multiplication Properties of Equality, we will follow the same steps we used in the last section. We will restate the problem in just one sentence, assign a variable, and then translate the sentence into an equation to solve.

Denae bought 6 pounds of grapes for ?10.74. What was the cost of one pound of grapes?

Arianna bought a 24-pack of water bottles for ?9.36. What was the cost of one water bottle?

The annual property tax on the Mehta’s house is ?1,800, calculated as

Stella planted 14 flats of flowers in

of her garden. How many flats of flowers would she need to fill the whole garden?

Solve Equations Using the Division and Multiplication Properties of Equality

In the following exercises, solve each equation using the Division and Multiplication Properties of Equality and check the solution.

In the following exercises, solve each equation requiring simplification.

In the following exercises, solve each equation.

In the following exercises, translate to an equation and then solve.

u divided by 7 is equal to

r divided by 12 is equal to

The sum of nine-tenths and g is two-thirds.

The sum of two-fifths and f is one-half.

The difference of p and one-sixth is two-thirds.

The difference of q and one-eighth is three-fourths.

In the following exercises, translate into an equation and solve.

Kindergarten Connie’s kindergarten class has 24 children. She wants them to get into 4 equal groups. How many children will she put in each group?

Balloons Ramona bought 18 balloons for a party. She wants to make 3 equal bunches. How many balloons did she use in each bunch?

Tickets Mollie paid ?36.25 for 5 movie tickets. What was the price of each ticket?

Height Aiden is 27 inches tall. He is

Commission Every week Perry gets paid ?150 plus 12% of his total sales amount. Solve the equation

for a, to find the total amount Perry must sell in order to be paid ?840 one week.

for s, to find the number of 49-cent stamps Travis bought.

Frida started to solve the equation

by adding 3 to both sides. Explain why Frida’s method will not solve the equation.

is the solution to the equation

. Explain why he is wrong.

ⓐ After completing the exercises, use this checklist to evaluate your mastery of the objectives of this section.

ⓑ What does this checklist tell you about your mastery of this section? What steps will you take to improve?

Elementary Algebra by OSCRiceUniversity is licensed under a Creative Commons Attribution 4.0 International License, except where otherwise noted.