Before you get started, take this readiness quiz.

Verify a Solution of an Equation

Solution of an equation

A solution of an equation is a value of a variable that makes a true statement when substituted into the equation.

To determine whether a number is a solution to an equation.

is a solution of

is a solution to the equation

Solve Equations Using the Subtraction and Addition Properties of Equality

We are going to use a model to clarify the process of solving an equation. An envelope represents the variable – since its contents are unknown – and each counter represents one. We will set out one envelope and some counters on our workspace, as shown in (Figure). Both sides of the workspace have the same number of counters, but some counters are “hidden” in the envelope. Can you tell how many counters are in the envelope?

What are you thinking? What steps are you taking in your mind to figure out how many counters are in the envelope?

Perhaps you are thinking: “I need to remove the 3 counters at the bottom left to get the envelope by itself. The 3 counters on the left can be matched with 3 on the right and so I can take them away from both sides. That leaves five on the right—so there must be 5 counters in the envelope.” See (Figure) for an illustration of this process.

The illustration shows a model for solving an equation with one variable. On both sides of the workspace remove three counters, leaving only the unknown (envelope) and five counters on the right side. The unknown is equal to five counters.

What algebraic equation would match this situation? In (Figure) each side of the workspace represents an expression and the center line takes the place of the equal sign. We will call the contents of the envelope

The illustration shows a model for the equation 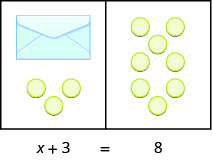 Let’s write algebraically the steps we took to discover how many counters were in the envelope:

Five in the envelope plus three more does equal eight!

Our model has given us an idea of what we need to do to solve one kind of equation. The goal is to isolate the variable by itself on one side of the equation. To solve equations such as these mathematically, we use the Subtraction Property of Equality.

When you subtract the same quantity from both sides of an equation, you still have equality.

Let’s see how to use this property to solve an equation. Remember, the goal is to isolate the variable on one side of the equation. And we check our solutions by substituting the value into the equation to make sure we have a true statement.

To get y by itself, we will undo the addition of 37 by using the Subtraction Property of Equality.

a true statement, we have the solution to this equation.

What happens when an equation has a number subtracted from the variable, as in the equation

? We use another property of equations to solve equations where a number is subtracted from the variable. We want to isolate the variable, so to ‘undo’ the subtraction we will add the number to both sides. We use the Addition Property of Equality.

When you add the same quantity to both sides of an equation, you still have equality.

In (Figure), 37 was added to the y and so we subtracted 37 to ‘undo’ the addition. In (Figure), we will need to ‘undo’ subtraction by using the Addition Property of Equality.

The next example will be an equation with decimals.

In the previous examples, we were able to isolate the variable with just one operation. Most of the equations we encounter in algebra will take more steps to solve. Usually, we will need to simplify one or both sides of an equation before using the Subtraction or Addition Properties of Equality.

You should always simplify as much as possible before you try to isolate the variable. Remember that to simplify an expression means to do all the operations in the expression. Simplify one side of the equation at a time. Note that simplification is different from the process used to solve an equation in which we apply an operation to both sides.

How to Solve Equations That Require Simplification

We simplify both sides of the equation as much as possible before we try to isolate the variable.

We simplify both sides of the equation before we isolate the variable.

To solve applications algebraically, we will begin by translating from English sentences into equations. Our first step is to look for the word (or words) that would translate to the equals sign. (Figure) shows us some of the words that are commonly used.

The steps we use to translate a sentence into an equation are listed below.

Translate an English sentence to an algebraic equation.

Translate and solve: Eleven more than x is equal to 54.

Translate and solve: Ten more than x is equal to 41.

Translate and solve: Twelve less than x is equal to 51.

Most of the time a question that requires an algebraic solution comes out of a real life question. To begin with that question is asked in English (or the language of the person asking) and not in math symbols. Because of this, it is an important skill to be able to translate an everyday situation into algebraic language.

We will start by restating the problem in just one sentence, assign a variable, and then translate the sentence into an equation to solve. When assigning a variable, choose a letter that reminds you of what you are looking for. For example, you might use q for the number of quarters if you were solving a problem about coins.

How to Solve Translate and Solve Applications

The Pappas family has two cats, Zeus and Athena. Together, they weigh 23 pounds. Zeus weighs 16 pounds. How much does Athena weigh?

Sam and Henry are roommates. Together, they have 68 books. Sam has 26 books. How many books does Henry have?

The admission price for the movies during the day is ?7.75. This is ?3.25 less the price at night. How much does the movie cost at night?

Verify a Solution of an Equation

In the following exercises, determine whether the given value is a solution to the equation.

Solve Equations using the Subtraction and Addition Properties of Equality

In the following exercises, solve each equation using the Subtraction and Addition Properties of Equality.

In the following exercises, solve each equation.

In the following exercises, translate to an equation and then solve it.

The sum of x and

Ten less than m is

Three less than y is

The sum of y and

Twelve more than p is equal to 67.

In the following exercises, translate into an equation and solve.

Age Eva’s daughter is 15 years younger than her son. Eva’s son is 22 years old. How old is her daughter?

Age Pablo’s father is 3 years older than his mother. Pablo’s mother is 42 years old. How old is his father?

Groceries For a family birthday dinner, Celeste bought a turkey that weighed 5 pounds less than the one she bought for Thanksgiving. The birthday turkey weighed 16 pounds. How much did the Thanksgiving turkey weigh?

Construction Miguel wants to drill a hole for a

inch screw. The hole should be

inch smaller than the screw. Let

equal the size of the hole he should drill. Solve the equation

to see what size the hole should be.

cup of sugar for the cookie recipe she wants to make. She only has

cup of sugar and will borrow the rest from her neighbor. Let

equal the amount of sugar she will borrow. Solve the equation

to find the amount of sugar she should ask to borrow.

a solution to the equation

No. Justifications will vary.

What is the first step in your solution to the equation

ⓐ After completing the exercises, use this checklist to evaluate your mastery of the objectives of this section.

ⓑ If most of your checks were:

…confidently. Congratulations! You have achieved your goals in this section! Reflect on the study skills you used so that you can continue to use them. What did you do to become confident of your ability to do these things? Be specific!

…with some help. This must be addressed quickly as topics you do not master become potholes in your road to success. Math is sequential – every topic builds upon previous work. It is important to make sure you have a strong foundation before you move on. Who can you ask for help? Your fellow classmates and instructor are good resources. Is there a place on campus where math tutors are available? Can your study skills be improved?

…no – I don’t get it! This is critical and you must not ignore it. You need to get help immediately or you will quickly be overwhelmed. See your instructor as soon as possible to discuss your situation. Together you can come up with a plan to get you the help you need.

Elementary Algebra by OSCRiceUniversity is licensed under a Creative Commons Attribution 4.0 International License, except where otherwise noted.