There is a special classification of mathematical relationships known as functions. So far, you will have unknowingly worked with many functions, where the defining characteristic is that functions have at most one output for any input. Properties of addition, subtraction, multiplication or division all bear the needed traits of being functions. For instance, 2 × 3 will always be 6. Formally, functions are defined in equations in terms of

, where there will only be one

output for any single

input. An equation is not considered a function if more than one

variable can be found for any

This means that the definition of a function, in terms of equations in

-value, there is at most one

-value that corresponds with it.

One way to use this definition to see if an equation represents a function is to look at its graph. This is done by looking at any

-value to see if there exists more than one corresponding

-value. If you can find any instance of this on the graph, then the equation drawn is not a function. For instance:

Are all the mathematical relationships shown below functions? 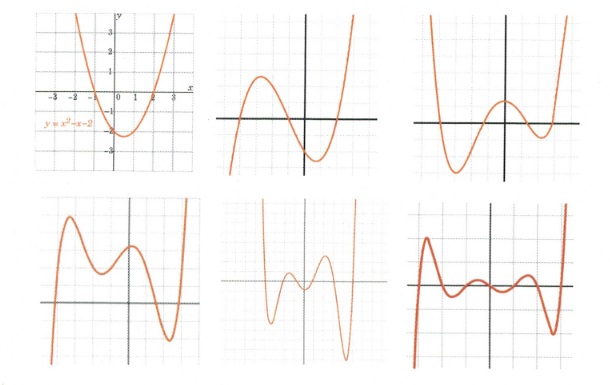 Solution: All of these are functions, since it is impossible to find any vertical line to cross more than one

Are any of the mathematical relationships shown below functions?

Solution: None of these are functions, since vertical lines can easily be drawn that will have 2 or more

-values for a single

Deciding if equations are functions requires more effort than using the vertical line test. The easiest method is to isolate the

-variable and see if it results in two potential

First, you need to isolate the

There is only one solution for

for any given value of

. Therefore, this equation is a function.

The next example shows an equation that is not a function, since there are two

-values for every given

First, you need to isolate the

Next, we remove the negatives by multiplying the entire equation by −1:

We are left with two solutions for any single

-variable. Therefore, this equation is not a function.

You are left with the same type of solution as you did when taking the square root, except in this case,

We are left with two solutions for any single

variable. Therefore, this equation is not a function

Excluded Values and Domains of a Function

When working with functions, one needs to identify what values of

cannot be used. These

Find the excluded values of the following function:

In this example, there will be 3 excluded values:

Since these terms are all in the denominator of this function, any value that can make one of them equal zero must be excluded.

Interpreting this means that the domain of

is any real number except for the excluded values.

You write this as:

Finding the domains of radicals can lead to an inequality as a solution, since any real solution of an even-valued radical is restricted in that the value inside the radical cannot be negative.

Find the excluded values of the following function:

Since its impossible to take any real root of a negative inside a radical, the value inside the radical must always be zero or larger. This means:

must always be greater than or equal to

appears in the works of Leonhard Euler in the early 1700s. If you have an equation that is found to be a function, such as

, it can also be written as

. It can be useful to write a function equation in this form. 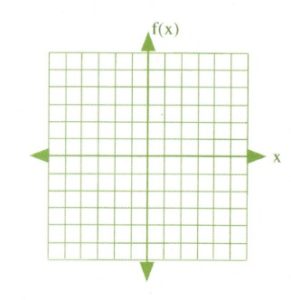 You should quickly notice that, in graphing these functions, the

-variable is replaced by the function notation

is the main change.

When drawing a graph of the function,

is treated as if it is the

inputs. For instance, suppose you are given the function

and you are asked to find the value of the

. This would be written as

and you would be asked to evaluate

. The following examples illustrate this process.

First, you need to replace all values of

Functions can be written using other letters outside of the standard

. In fact, just about any letter will suffice. For instance, for the equation

, this can be written in function notation as

First, you need to replace all values of

Specify the domain of each of the following functions.

Evaluate each of the following functions.