Here are some facts about the F distribution. 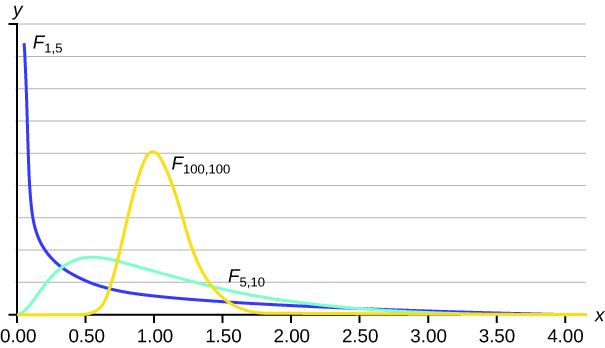 The graph of the F distribution is always positive and skewed right, though the shape can be mounded or exponential depending on the combination of numerator and denominator degrees of freedom. The F statistic is the ratio of a measure of the variation in the group means to a similar measure of the variation within the groups. If the null hypothesis is correct, then the numerator should be small compared to the denominator. A small F statistic will result, and the area under the F curve to the right will be large, representing a large p-value. When the null hypothesis of equal group means is incorrect, then the numerator should be large compared to the denominator, giving a large F statistic and a small area (small p-value) to the right of the statistic under the F curve.

When the data have unequal group sizes (unbalanced data), then techniques from (Figure) need to be used for hand calculations. In the case of balanced data (the groups are the same size) however, simplified calculations based on group means and variances may be used. In practice, of course, software is usually employed in the analysis. As in any analysis, graphs of various sorts should be used in conjunction with numerical techniques. Always look at your data!

An F statistic can have what values?

What happens to the curves as the degrees of freedom for the numerator and the denominator get larger?

The curves approximate the normal distribution.

Use the following information to answer the next seven exercise. Four basketball teams took a random sample of players regarding how high each player can jump (in inches). The results are shown in (Figure).

What are the Sum of Squares and Mean Squares Factors?

What are the Sum of Squares and Mean Squares Errors?

At the 5% significance level, is there a difference in the mean jump heights among the teams?

Use the following information to answer the next seven exercises. A video game developer is testing a new game on three different groups. Each group represents a different target market for the game. The developer collects scores from a random sample from each group. The results are shown in (Figure)

At the 10% significance level, are the scores among the different groups different?

Yes, there is enough evidence to show that the scores among the groups are statistically significant at the 10% level.

Enter the data into your calculator or computer.

State the decisions and conclusions (in complete sentences) for the following preconceived levels of α.

Three students, Linda, Tuan, and Javier, are given five laboratory rats each for a nutritional experiment. Each rat’s weight is recorded in grams. Linda feeds her rats Formula A, Tuan feeds his rats Formula B, and Javier feeds his rats Formula C. At the end of a specified time period, each rat is weighed again, and the net gain in grams is recorded. Using a significance level of 10%, test the hypothesis that the three formulas produce the same mean weight gain.

A grassroots group opposed to a proposed increase in the gas tax claimed that the increase would hurt working-class people the most, since they commute the farthest to work. Suppose that the group randomly surveyed 24 individuals and asked them their daily one-way commuting mileage. The results are in (Figure).  Using a 5% significance level, test the hypothesis that the three mean commuting mileages are the same.

Use the following information to answer the next two exercises.(Figure) lists the number of pages in four different types of magazines.

Using a significance level of 5%, test the hypothesis that the four magazine types have the same mean length.

A researcher wants to know if the mean times (in minutes) that people watch their favorite news station are the same. Suppose that (Figure) shows the results of a study.

Are the mean number of times a month a person eats out the same for whites, blacks, Hispanics and Asians? Suppose that (Figure) shows the results of a study.

Are the mean numbers of daily visitors to a ski resort the same for the three types of snow conditions? Suppose that (Figure) shows the results of a study.

Sanjay made identical paper airplanes out of three different weights of paper, light, medium and heavy. He made four airplanes from each of the weights, and launched them himself across the room. Here are the distances (in meters) that his planes flew. 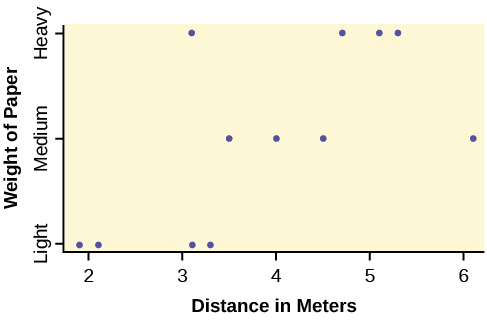 DDT is a pesticide that has been banned from use in the United States and most other areas of the world. It is quite effective, but persisted in the environment and over time became seen as harmful to higher-level organisms. Famously, egg shells of eagles and other raptors were believed to be thinner and prone to breakage in the nest because of ingestion of DDT in the food chain of the birds.

An experiment was conducted on the number of eggs (fecundity) laid by female fruit flies. There are three groups of flies. One group was bred to be resistant to DDT (the RS group). Another was bred to be especially susceptible to DDT (SS). Finally there was a control line of non-selected or typical fruitflies (NS). Here are the data:

The values are the average number of eggs laid daily for each of 75 flies (25 in each group) over the first 14 days of their lives. Using a 1% level of significance, are the mean rates of egg selection for the three strains of fruitfly different? If so, in what way? Specifically, the researchers were interested in whether or not the selectively bred strains were different from the nonselected line, and whether the two selected lines were different from each other.

Here is a chart of the three groups: 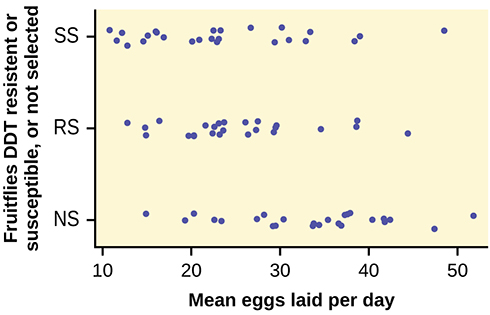 The data appear normally distributed from the chart and of similar spread. There do not appear to be any serious outliers, so we may proceed with our ANOVA calculations, to see if we have good evidence of a difference between the three groups.

Define μ1, μ2, μ3, as the population mean number of eggs laid by the three groups of fruit flies. 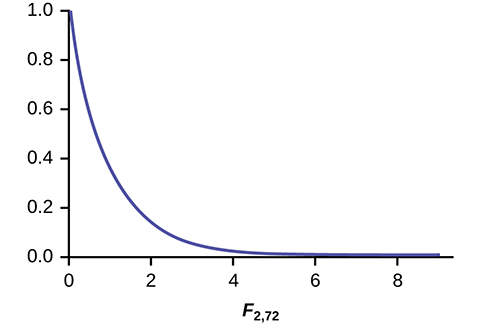 Decision: Since the p-value is less than the level of significance of 0.01, we reject the null hypothesis.

Conclusion: We have good evidence that the average number of eggs laid during the first 14 days of life for these three strains of fruitflies are different.

The data shown is the recorded body temperatures of 130 subjects as estimated from available histograms.

Traditionally we are taught that the normal human body temperature is 98.6 F. This is not quite correct for everyone. Are the mean temperatures among the four groups different?