This chapter introduces a new probability density function, the F distribution. This distribution is used for many applications including ANOVA and for testing equality across multiple means. We begin with the F distribution and the test of hypothesis of differences in variances. It is often desirable to compare two variances rather than two averages. For instance, college administrators would like two college professors grading exams to have the same variation in their grading. In order for a lid to fit a container, the variation in the lid and the container should be approximately the same. A supermarket might be interested in the variability of check-out times for two checkers. In finance, the variance is a measure of risk and thus an interesting question would be to test the hypothesis that two different investment portfolios have the same variance, the volatility.

In order to perform a F test of two variances, it is important that the following are true:

Unlike most other hypothesis tests in this book, the F test for equality of two variances is very sensitive to deviations from normality. If the two distributions are not normal, or close, the test can give a biased result for the test statistic.

be the unknown population variances and

If the null hypothesis is

The various forms of the hypotheses tested are:

A more general form of the null and alternative hypothesis for a two tailed test would be :

If the two populations have equal variances, then

are close in value and the test statistic,

is close to one. But if the two population variances are very different,

tend to be very different, too. Choosing

as the larger sample variance causes the ratio

to be greater than one. If

are far apart, then

To find the critical value for the lower end of the distribution, reverse the degrees of freedom and divide the F-value from the table into one.

An alternative way of finding the critical values of the F distribution makes the use of the F-table easier. We note in the F-table that all the values of F are greater than one therefore the critical F value for the left hand tail will always be less than one because to find the critical value on the left tail we divide an F value into the number one as shown above. We also note that if the sample variance in the numerator of the test statistic is larger than the sample variance in the denominator, the resulting F value will be greater than one. The shorthand method for this test is thus to be sure that the larger of the two sample variances is placed in the numerator to calculate the test statistic. This will mean that only the right hand tail critical value will have to be found in the F-table.

Let 1 and 2 be the subscripts that indicate the first and second instructor, respectively.

Calculate the test statistic: By the null hypothesis

, the F statistic is: 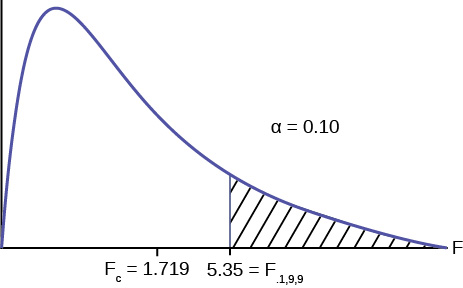 Make a decision: Since the calculated F value is not in the tail we cannot reject H0.

Conclusion: With a 10% level of significance, from the data, there is insufficient evidence to conclude that the variance in grades for the first instructor is smaller.

The New York Choral Society divides male singers up into four categories from highest voices to lowest: Tenor1, Tenor2, Bass1, Bass2. In the table are heights of the men in the Tenor1 and Bass2 groups. One suspects that taller men will have lower voices, and that the variance of height may go up with the lower voices as well. Do we have good evidence that the variance of the heights of singers in each of these two groups (Tenor1 and Bass2) are different?

The histograms are not as normal as one might like. Plot them to verify. However, we proceed with the test in any case.

We have no good evidence from the data that the heights of Tenor1 and Bass2 singers have different variances (despite there being a significant difference in mean heights of about 2.5 inches.)

Use the following information to answer the next two exercises. There are two assumptions that must be true in order to perform an F test of two variances.

Name one assumption that must be true.

The populations from which the two samples are drawn are normally distributed.

What is the other assumption that must be true?

Use the following information to answer the next five exercises. Two coworkers commute from the same building. They are interested in whether or not there is any variation in the time it takes them to drive to work. They each record their times for 20 commutes. The first worker’s times have a variance of 12.1. The second worker’s times have a variance of 16.9. The first worker thinks that he is more consistent with his commute times. Test the claim at the 10% level. Assume that commute times are normally distributed.

What is s1 in this problem?

What is s2 in this problem?

What is the critical value?

Is the claim accurate?

What is the critical value?

At the 5% significance level, do we reject the null hypothesis?

Use the following information to answer the next three exercises. Two cyclists are comparing the variances of their overall paces going uphill. Each cyclist records his or her speeds going up 35 hills. The first cyclist has a variance of 23.8 and the second cyclist has a variance of 32.1. The cyclists want to see if their variances are the same or different. Assume that commute times are normally distributed.

At the 5% significance level, what can we say about the cyclists’ variances?

Determine whether or not the variance in weight gain is statistically the same among Javier’s and Linda’s rats. Test at a significance level of 10%.

A grassroots group opposed to a proposed increase in the gas tax claimed that the increase would hurt working-class people the most, since they commute the farthest to work. Suppose that the group randomly surveyed 24 individuals and asked them their daily one-way commuting mileage. The results are as follows.

Determine whether or not the variance in mileage driven is statistically the same among the working class and professional (middle income) groups. Use a 5% significance level.

Use the following information to answer the next two exercises. The following table lists the number of pages in four different types of magazines.

Which two magazine types do you think have the same variance in length?

Which two magazine types do you think have different variances in length?

Are the variances for incomes on the East Coast and the West Coast the same? Suppose that (Figure) shows the results of a study. Income is shown in thousands of dollars. Assume that both distributions are normal. Use a level of significance of 0.05.

Thirty men in college were taught a method of finger tapping. They were randomly assigned to three groups of ten, with each receiving one of three doses of caffeine: 0 mg, 100 mg, 200 mg. This is approximately the amount in no, one, or two cups of coffee. Two hours after ingesting the caffeine, the men had the rate of finger tapping per minute recorded. The experiment was double blind, so neither the recorders nor the students knew which group they were in. Does caffeine affect the rate of tapping, and if so how?

Here are the data:

King Manuel I, Komnenus ruled the Byzantine Empire from Constantinople (Istanbul) during the years 1145 to 1180 A.D. The empire was very powerful during his reign, but declined significantly afterwards. Coins minted during his era were found in Cyprus, an island in the eastern Mediterranean Sea. Nine coins were from his first coinage, seven from the second, four from the third, and seven from a fourth. These spanned most of his reign. We have data on the silver content of the coins:

Did the silver content of the coins change over the course of Manuel’s reign?

Here are the means and variances of each coinage. The data are unbalanced.

Here is a strip chart of the silver content of the coins: 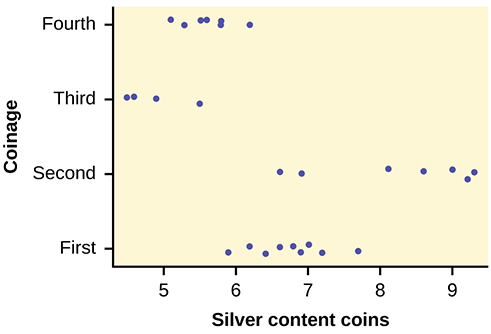 While there are differences in spread, it is not unreasonable to use ANOVA techniques. Here is the completed ANOVA table:

Cannot accept the null hypothesis for any alpha. There is sufficient evidence to conclude that the mean silver content among the four coinages are different. From the strip chart, it appears that the first and second coinages had higher silver contents than the third and fourth.

The American League and the National League of Major League Baseball are each divided into three divisions: East, Central, and West. Many years, fans talk about some divisions being stronger (having better teams) than other divisions. This may have consequences for the postseason. For instance, in 2012 Tampa Bay won 90 games and did not play in the postseason, while Detroit won only 88 and did play in the postseason. This may have been an oddity, but is there good evidence that in the 2012 season, the American League divisions were significantly different in overall records? Use the following data to test whether the mean number of wins per team in the three American League divisions were the same or not. Note that the data are not balanced, as two divisions had five teams, while one had only four.

Here is a stripchart of the number of wins for the 14 teams in the AL for the 2012 season. 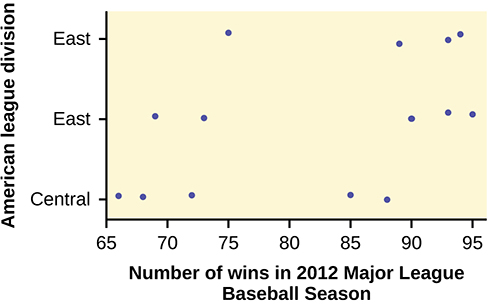 While the spread seems similar, there may be some question about the normality of the data, given the wide gaps in the middle near the 0.500 mark of 82 games (teams play 162 games each season in MLB). However, one-way ANOVA is robust.

Here is the ANOVA table for the data: