The reasons that one samples a population are obvious. The time and expense of checking every invoice to determine its validity or every shipment to see if it contains all the items may well exceed the cost of errors in billing or shipping. For some products, sampling would require destroying them, called destructive sampling. One such example is measuring the ability of a metal to withstand saltwater corrosion for parts on ocean going vessels.

Sampling thus raises an important question; just which sample was drawn. Even if the sample were randomly drawn, there are theoretically an almost infinite number of samples. With just 100 items, there are more than 75 million unique samples of size five that can be drawn. If six are in the sample, the number of possible samples increases to just more than one billion. Of the 75 million possible samples, then, which one did you get? If there is variation in the items to be sampled, there will be variation in the samples. One could draw an “unlucky” sample and make very wrong conclusions concerning the population. This recognition that any sample we draw is really only one from a distribution of samples provides us with what is probably the single most important theorem is statistics: the Central Limit Theorem. Without the Central Limit Theorem it would be impossible to proceed to inferential statistics from simple probability theory. In its most basic form, the Central Limit Theorem states that regardless of the underlying probability density function of the population data, the theoretical distribution of the means of samples from the population will be normally distributed. In essence, this says that the mean of a sample should be treated like an observation drawn from a normal distribution. The Central Limit Theorem only holds if the sample size is “large enough” which has been shown to be only 30 observations or more. 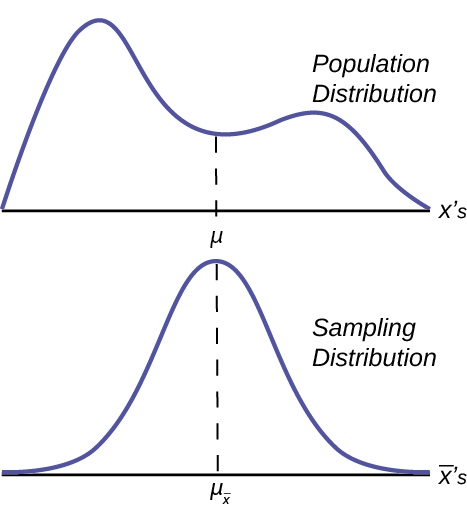 Notice that the horizontal axis in the top panel is labeled X. These are the individual observations of the population. This is the unknown distribution of the population values. The graph is purposefully drawn all squiggly to show that it does not matter just how odd ball it really is. Remember, we will never know what this distribution looks like, or its mean or standard deviation for that matter.

The horizontal axis in the bottom panel is labeled

The Central Limit Theorem goes even further and tells us the mean and standard deviation of this theoretical distribution.

The practical significance of The Central Limit Theorem is that now we can compute probabilities for drawing a sample mean,

in the first formula has been changed to simply µ in the second version. The reason is that mathematically it can be shown that the expected value of

is equal to µ. This was stated in (Figure) above. Mathematically, the E(x) symbol read the “expected value of x”. This formula will be used in the next unit to provide estimates of the unknown population parameter μ.

Data from the United States Department of Agriculture.

Finite Population Correction Factor for the sampling distribution of means:

Finite Population Correction Factor for the sampling distribution of proportions:

Suppose that the distance of fly balls hit to the outfield (in baseball) is normally distributed with a mean of 250 feet and a standard deviation of 50 feet. We randomly sample 49 fly balls.

According to the Internal Revenue Service, the average length of time for an individual to complete (keep records for, learn, prepare, copy, assemble, and send) IRS Form 1040 is 10.53 hours (without any attached schedules). The distribution is unknown. Let us assume that the standard deviation is two hours. Suppose we randomly sample 36 taxpayers.

Suppose that a category of world-class runners are known to run a marathon (26 miles) in an average of 145 minutes with a standard deviation of 14 minutes. Consider 49 of the races. Let

the average of the 49 races.

The length of songs in a collector’s iTunes album collection is uniformly distributed from two to 3.5 minutes. Suppose we randomly pick five albums from the collection. There are a total of 43 songs on the five albums.

Determine which of the following are true and which are false. Then, in complete sentences, justify your answers.

The percent of fat calories that a person in America consumes each day is normally distributed with a mean of about 36 and a standard deviation of about ten. Suppose that 16 individuals are randomly chosen. Let

The distribution of income in some Third World countries is considered wedge shaped (many very poor people, very few middle income people, and even fewer wealthy people). Suppose we pick a country with a wedge shaped distribution. Let the average salary be ?2,000 per year with a standard deviation of ?8,000. We randomly survey 1,000 residents of that country.

Which of the following is NOT TRUE about the distribution for averages?

Average
a number that describes the central tendency of the data; there are a number of specialized averages, including the arithmetic mean, weighted mean, median, mode, and geometric mean.

Central Limit Theorem
Given a random variable with known mean μ and known standard deviation, σ, we are sampling with size n, and we are interested in two new RVs: the sample mean,

. If the size (n) of the sample is sufficiently large, then

, is called the standard error of the mean.

Standard Error of the Mean
the standard deviation of the distribution of the sample means, or