65 The F Distribution and the F-Ratio

The distribution used for the hypothesis test is a new one. It is called the F distribution, invented by George Snedecor but named in honor of Sir Ronald Fisher, an English statistician. The F statistic is a ratio (a fraction). There are two sets of degrees of freedom; one for the numerator and one for the denominator.

To calculate the F ratio, two estimates of the variance are made.

To find a “sum of squares” means to add together squared quantities that, in some cases, may be weighted. We used sum of squares to calculate the sample variance and the sample standard deviation in (Figure).

Calculation of Sum of Squares and Mean Square

The one-way ANOVA test depends on the fact that MSbetween can be influenced by population differences among means of the several groups. Since MSwithin compares values of each group to its own group mean, the fact that group means might be different does not affect MSwithin.

If MSbetween and MSwithin estimate the same value (following the belief that H0 is true), then the F-ratio should be approximately equal to one. Mostly, just sampling errors would contribute to variations away from one. As it turns out, MSbetween consists of the population variance plus a variance produced from the differences between the samples. MSwithin is an estimate of the population variance. Since variances are always positive, if the null hypothesis is false, MSbetween will generally be larger than MSwithin.Then the F-ratio will be larger than one. However, if the population effect is small, it is not unlikely that MSwithin will be larger in a given sample.

The foregoing calculations were done with groups of different sizes. If the groups are the same size, the calculations simplify somewhat and the F-ratio can be written as:

F-Ratio Formula when the groups are the same size

Data are typically put into a table for easy viewing. One-Way ANOVA results are often displayed in this manner by computer software.

Three different diet plans are to be tested for mean weight loss. The entries in the table are the weight losses for the different plans. The one-way ANOVA results are shown in (Figure).

Following are the calculations needed to fill in the one-way ANOVA table. The table is used to conduct a hypothesis test.

As part of an experiment to see how different types of soil cover would affect slicing tomato production, Marist College students grew tomato plants under different soil cover conditions. Groups of three plants each had one of the following treatments

All plants grew under the same conditions and were the same variety. Students recorded the weight (in grams) of tomatoes produced by each of the n = 15 plants:

The one-way ANOVA hypothesis test is always right-tailed because larger F-values are way out in the right tail of the F-distribution curve and tend to make us reject H0.

Let’s return to the slicing tomato exercise in (Figure). The means of the tomato yields under the five mulching conditions are represented by μ1, μ2, μ3, μ4, μ5. We will conduct a hypothesis test to determine if all means are the same or at least one is different. Using a significance level of 5%, test the null hypothesis that there is no difference in mean yields among the five groups against the alternative hypothesis that at least one mean is different from the rest.

The null and alternative hypotheses are:

The one-way ANOVA results are shown in (Figure)

Distribution for the test: F4,10 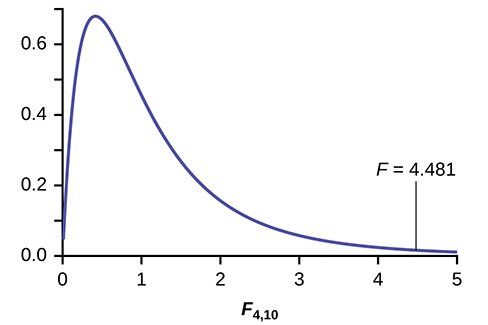 Make a decision: Since α > p-value, we cannot accept H0.

Conclusion: At the 5% significance level, we have reasonably strong evidence that differences in mean yields for slicing tomato plants grown under different mulching conditions are unlikely to be due to chance alone. We may conclude that at least some of mulches led to different mean yields.

MRSA, or Staphylococcus aureus, can cause a serious bacterial infections in hospital patients. (Figure) shows various colony counts from different patients who may or may not have MRSA. The data from the table is plotted in (Figure).

Plot of the data for the different concentrations: 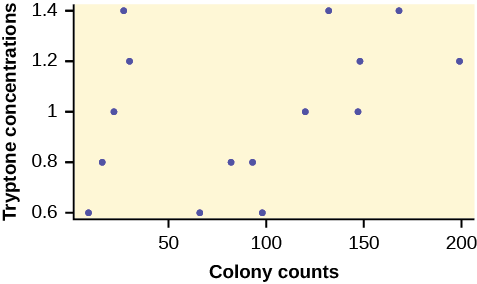 Test whether the mean number of colonies are the same or are different. Construct the ANOVA table, find the p-value, and state your conclusion. Use a 5% significance level.

While there are differences in the spreads between the groups (see (Figure)), the differences do not appear to be big enough to cause concern.

We test for the equality of mean number of colonies:

The one-way ANOVA table results are shown in (Figure). 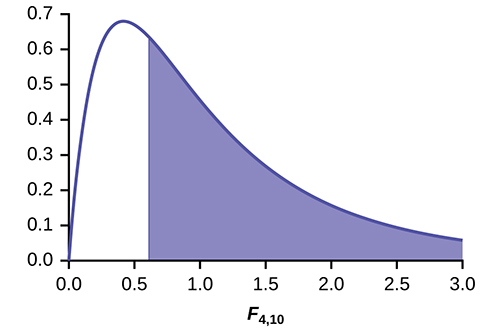 Conclusion: At the 5% significance level, there is insufficient evidence from these data that different levels of tryptone will cause a significant difference in the mean number of bacterial colonies formed.

Four sororities took a random sample of sisters regarding their grade means for the past term. The results are shown in (Figure).

Using a significance level of 1%, is there a difference in mean grades among the sororities?

This is an example of a balanced design, because each factor (i.e., sorority) has the same number of observations.

Ha: Not all of the means 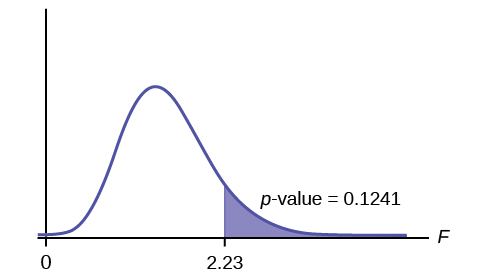 Make a decision: Since α < p-value, you cannot reject H0.

Conclusion: There is not sufficient evidence to conclude that there is a difference among the mean grades for the sororities.

Four sports teams took a random sample of players regarding their GPAs for the last year. The results are shown in (Figure).

Use a significance level of 5%, and determine if there is a difference in GPA among the teams.

With a p-value of 0.9271, we decline to reject the null hypothesis. There is not sufficient evidence to conclude that there is a difference among the GPAs for the sports teams.

Does it appear that the three media in which the bean plants were grown produce the same mean height? Test at a 3% level of significance.

This time, we will perform the calculations that lead to the F’ statistic. Notice that each group has the same number of plants, so we will use the formula F’ =

First, calculate the sample mean and sample variance of each group.

The F statistic (or F ratio) is

Conclusion: With a 3% level of significance, from the sample data, the evidence is not sufficient to conclude that the mean heights of the bean plants are different.

The notation for the F distribution is F ~ Fdf(num),df(denom)

The mean for the F distribution is

Analysis of variance compares the means of a response variable for several groups. ANOVA compares the variation within each group to the variation of the mean of each group. The ratio of these two is the F statistic from an F distribution with (number of groups – 1) as the numerator degrees of freedom and (number of observations – number of groups) as the denominator degrees of freedom. These statistics are summarized in the ANOVA table.

Use the following information to answer the next eight exercises. Groups of men from three different areas of the country are to be tested for mean weight. The entries in (Figure) are the weights for the different groups.

What is the Sum of Squares Factor?

What is the Sum of Squares Error?

What is the df for the numerator?

What is the df for the denominator?

What is the Mean Square Factor?

What is the Mean Square Error?

Use the following information to answer the next eight exercises. Girls from four different soccer teams are to be tested for mean goals scored per game. The entries in (Figure) are the goals per game for the different teams.

What is the df for the numerator?

What is the df for the denominator?

Judging by the F statistic, do you think it is likely or unlikely that you will reject the null hypothesis?

Because a one-way ANOVA test is always right-tailed, a high F statistic corresponds to a low p-value, so it is likely that we cannot accept the null hypothesis.