Box plots (also called box-and-whisker plots or box-whisker plots) give a good graphical image of the concentration of the data. They also show how far the extreme values are from most of the data. A box plot is constructed from five values: the minimum value, the first quartile, the median, the third quartile, and the maximum value. We use these values to compare how close other data values are to them.

To construct a box plot, use a horizontal or vertical number line and a rectangular box. The smallest and largest data values label the endpoints of the axis. The first quartile marks one end of the box and the third quartile marks the other end of the box. Approximately the middle 50 percent of the data fall inside the box. The “whiskers” extend from the ends of the box to the smallest and largest data values. The median or second quartile can be between the first and third quartiles, or it can be one, or the other, or both. The box plot gives a good, quick picture of the data.

You may encounter box-and-whisker plots that have dots marking outlier values. In those cases, the whiskers are not extending to the minimum and maximum values.

The first quartile is two, the median is seven, and the third quartile is nine. The smallest value is one, and the largest value is 11.5. The following image shows the constructed box plot.

See the calculator instructions on the TI web site or in the appendix.

It is important to start a box plot with a scaled number line. Otherwise the box plot may not be useful.

The following data are the heights of 40 students in a statistics class.

Construct a box plot with the following properties; the calculator intructions for the minimum and maximum values as well as the quartiles follow the example.

To find the minimum, maximum, and quartiles:

Enter data into the list editor (Pres STAT 1:EDIT). If you need to clear the list, arrow up to the name L1, press CLEAR, and then arrow down.

Use the down and up arrow keys to scroll.

To construct the box plot:

Arrow down and then use the right arrow key to go to the fifth picture, which is the box plot. Press ENTER.

Press TRACE, and use the arrow keys to examine the box plot.

The following data are the number of pages in 40 books on a shelf. Construct a box plot using a graphing calculator, and state the interquartile range.

Test scores for a college statistics class held during the day are:

Test scores for a college statistics class held during the evening are:

The following data set shows the heights in inches for the boys in a class of 40 students.

Graph a box-and-whisker plot for the data values shown.

The five numbers used to create a box-and-whisker plot are:

Follow the steps you used to graph a box-and-whisker plot for the data values shown.

Box plots are a type of graph that can help visually organize data. To graph a box plot the following data points must be calculated: the minimum value, the first quartile, the median, the third quartile, and the maximum value. Once the box plot is graphed, you can display and compare distributions of data.

Construct a box plot below. Use a ruler to measure and scale accurately.

Looking at your box plot, does it appear that the data are concentrated together, spread out evenly, or concentrated in some areas, but not in others? How can you tell?

More than 25% of salespersons sell four cars in a typical week. You can see this concentration in the box plot because the first quartile is equal to the median. The top 25% and the bottom 25% are spread out evenly; the whiskers have the same length.

In a survey of 20-year-olds in China, Germany, and the United States, people were asked the number of foreign countries they had visited in their lifetime. The following box plots display the results.

Given the following box plot, answer the questions.

Given the following box plots, answer the questions. 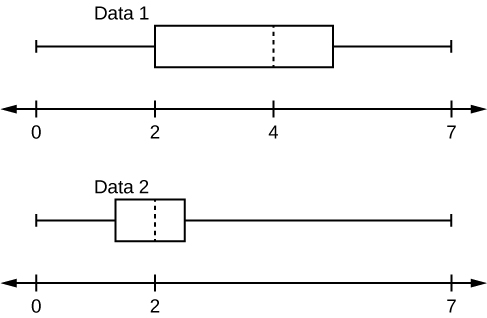 Twenty-five randomly selected students were asked the number of movies they watched the previous week. The results are as follows:

Construct a box plot of the data.

Santa Clara County, CA, has approximately 27,873 Japanese-Americans. Their ages are as follows: 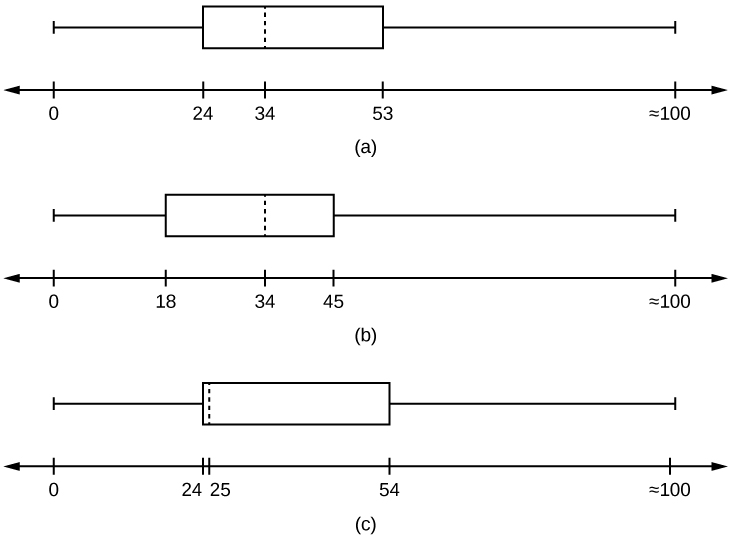 Interval
also called a class interval; an interval represents a range of data and is used when displaying large data sets

Paired Data Set
two data sets that have a one to one relationship so that:

Box Plots by OpenStaxCollege is licensed under a Creative Commons Attribution 4.0 International License, except where otherwise noted.