Anatomy and Normal Microbiota of the Urogenital Tract

Nadia is a newly married 26-year-old graduate student in economics. Recently she has been experiencing an unusual vaginal discharge, as well as some itching and discomfort. Since she is due for her annual physical exam, she makes an appointment with her doctor hoping that her symptoms can be quickly treated. However, she worries that she may have some sort of sexually transmitted infection (STI). Although she is now in a monogamous relationship, she is not fully certain of her spouse’s sexual history and she is reluctant to ask him about it.

At her checkup, Nadia describes her symptoms to her primary care physician and, somewhat awkwardly, explains why she thinks she might have an STI. Nadia’s doctor reassures her that she regularly sees patients with similar concerns and encourages her to be fully transparent about her symptoms because some STIs can have serious complications if left untreated. After some further questioning, the doctor takes samples of Nadia’s blood, urine, and vaginal discharge to be sent to the lab for testing.

The urinary system filters blood, excretes wastes, and maintains an appropriate electrolyte and water balance. The reproductive system is responsible for the production of gametes and participates in conception and, in females, development of offspring. Due to their proximity and overlap, these systems are often studied together and referred to as the urogenital system (or genitourinary system).

Anatomy of the Urinary Tract

The kidneys carry out the urinary system’s primary functions of filtering the blood and maintaining water and electrolyte balance. The kidneys are composed of millions of filtration units called nephrons. Each nephron is in intimate contact with blood through a specialized capillary bed called the glomerulus (plural glomeruli). Fluids, electrolytes, and molecules from the blood pass from the glomerulus into the nephron, creating the filtrate that becomes urine (Figure 2). Urine that collects in each kidney empties through a ureter and drains to the urinary bladder, which stores urine. Urine is released from the bladder to the urethra, which transports it to be excreted from the body through the urinary meatus, the opening of the urethra.

Anatomy of the Reproductive System

The male reproductive system (Figure 3) is located in close proximity to the urinary system, and the urethra is part of both systems. The testes are responsible for the production of sperm. The epididymis is a coiled tube that collects sperm from the testes and passes it on to the vas deferens. The epididymis is also the site of sperm maturation after they leave the testes. The seminal vesicles and prostate are accessory glands that produce fluid that supports sperm. During ejaculation, the vas deferens releases this mixture of fluid and sperm, called semen, into the urethra, which extends to the end of the penis.

The female reproductive system is located near the urinary system (Figure 3). The external genitalia (vulva) in females open to the vagina, a muscular passageway that connects to the cervix. The cervix is the lower part of the uterus (the organ where a fertilized egg will implant and develop). The cervix is a common site of infection, especially for viruses that may lead to cervical cancer. The uterus leads to the fallopian tubes and eventually to the ovaries. Ovaries are the site of ova (egg) production, as well as the site of estrogen and progesterone production that are involved in maturation and maintenance of reproductive organs, preparation of the uterus for pregnancy, and regulation of the menstrual cycle.

Normal Microbiota of the Urogenital System

The normal microbiota of different body sites provides an important nonspecific defense against infectious diseases (see Physical Defenses), and the urogenital tract is no exception. In both men and women, however, the kidneys are sterile. Although urine does contain some antibacterial components, bacteria will grow in urine left out at room temperature. Therefore, it is primarily the flushing action that keeps the ureters and bladder free of microbes.

Below the bladder, the normal microbiota of the male urogenital system is found primarily within the distal urethra and includes bacterial species that are commonly associated with the skin microbiota. In women, the normal microbiota is found within the distal one third of the urethra and the vagina. The normal microbiota of the vagina becomes established shortly after birth and is a complex and dynamic population of bacteria that fluctuates in response to environmental changes. Members of the vaginal microbiota play an important role in the nonspecific defense against vaginal infections and sexually transmitted infections by occupying cellular binding sites and competing for nutrients. In addition, the production of lactic acid by members of the microbiota provides an acidic environment within the vagina that also serves as a defense against infections. For the majority of women, the lactic-acid–producing bacteria in the vagina are dominated by a variety of species of Lactobacillus. For women who lack sufficient lactobacilli in their vagina, lactic acid production comes primarily from other species of bacteria such as Leptotrichia spp., Megasphaera spp., and Atopobium vaginae. Lactobacillus spp. use glycogen from vaginal epithelial cells for metabolism and production of lactic acid. This process is tightly regulated by the hormone estrogen. Increased levels of estrogen correlate with increased levels of vaginal glycogen, increased production of lactic acid, and a lower vaginal pH. Therefore, decreases in estrogen during the menstrual cycle and with menopause are associated with decreased levels of vaginal glycogen and lactic acid, and a higher pH. In addition to producing lactic acid, Lactobacillus spp. also contribute to the defenses against infectious disease through their production of hydrogen peroxide and bacteriocins (antibacterial peptides).

Infections of the urinary tract most commonly cause inflammation of the bladder (cystitis) or of the urethra (urethritis). Urethritis can be associated with cystitis, but can also be caused by sexually transmitted infections. Symptoms of urethritis in men include burning sensation while urinating, discharge from the penis, and blood in the semen or the urine. In women, urethritis is associated with painful and frequent urination, vaginal discharge, fever, chills, and abdominal pain. The symptoms of cystitis are similar to those of urethritis. When urethritis is caused by a sexually transmitted pathogen, additional symptoms involving the genitalia can occur. These can include painful vesicles (blisters), warts, and ulcers. Ureteritis, a rare infection of the ureter, can also occur with cystitis. These infections can be acute or chronic.

Glomerulonephritis is an inflammation of the glomeruli of the nephrons. Symptoms include excessive protein and blood in urine, increased blood pressure, and fluid retention leading to edema of face, hands, and feet. Glomerulonephritis may be an acute infection or it can become chronic.

Infections occurring within the reproductive structures of males include epididymitis, orchitis, and prostatitis. Bacterial infections may cause inflammation of the epididymis, called epididymitis. This inflammation causes pain in the scrotum, testicles, and groin; swelling, redness, and warm skin in these areas may also be observed. Inflammation of the testicle, called orchitis, is usually caused by a bacterial infection spreading from the epididymis, but it can also be a complication of mumps, a viral disease. The symptoms are similar to those of epididymitis, and it is not uncommon for them both to occur together, in which case the condition is called epididymo-orchitis. Inflammation of the prostate gland, called prostatitis, can result from a bacterial infection. The signs and symptoms of prostatitis include fever, chills, and pain in the bladder, testicles, and penis. Patients may also experience burning during urination, difficulty emptying the bladder, and painful ejaculation.

Because of its proximity to the exterior, the vagina is a common site for infections in women. The general term for any inflammation of the vagina is vaginitis. Vaginitis often develops as a result of an overgrowth of bacteria or fungi that normally reside in the vaginal microbiota, although it can also result from infections by transient pathogens. Bacterial infections of the vagina are called bacterial vaginosis, whereas fungal infections (typically involving Candida spp.) are called yeast infections. Dynamic changes affecting the normal microbiota, acid production, and pH variations can be involved in the initiation of the microbial overgrowth and the development of vaginitis. Although some individuals may have no symptoms, vaginosis and vaginitis can be associated with discharge, odor, itching, and burning.

Pelvic inflammatory disease (PID) is an infection of the female reproductive organs including the uterus, cervix, fallopian tubes, and ovaries. The two most common pathogens are the sexually transmitted bacterial pathogens Neisseria gonorrhoeae and Chlamydia trachomatis. Inflammation of the fallopian tubes, called salpingitis, is the most serious form of PID. Symptoms of PID can vary between women and include pain in the lower abdomen, vaginal discharge, fever, chills, nausea, diarrhea, vomiting, and painful urination.

General Causes and Modes of Transmission of Urogenital Infections

Hormonal changes, particularly shifts in estrogen in women due to pregnancy or menopause, can increase susceptibility to urogenital infections. As discussed earlier, estrogen plays an important role in regulating the availability of glycogen and subsequent production of lactic acid by Lactobacillus species. Low levels of estrogen are associated with an increased vaginal pH and an increased risk of bacterial vaginosis and yeast infections. Estrogen also plays a role in maintaining the elasticity, strength, and thickness of the vaginal wall, and keeps the vaginal wall lubricated, reducing dryness. Low levels of estrogen are associated with thinning of the vaginal wall. This thinning increases the risk of tears and abrasions, which compromise the protective barrier and increase susceptibility to pathogens.

Another common cause of urogenital infections in females is fecal contamination that occurs because of the close proximity of the anus and the urethra. Escherichia coli, an important member of the digestive tract microbiota, is the most common cause of urinary tract infections (urethritis and cystitis) in women; it generally causes infection when it is introduced to the urethra in fecal matter. Good hygiene can reduce the risk of urinary tract infections by this route. In men, urinary tract infections are more commonly associated with other conditions, such as an enlarged prostate, kidney stones, or placement of a urinary catheter. All of these conditions impair the normal emptying of the bladder, which serves to flush out microbes capable of causing infection.

Infections that are transmitted between individuals through sexual contact are called sexually transmitted infections (STIs) or sexually transmitted diseases (STDs). (The CDC prefers the term STD, but WHO prefers STI,[1] which encompasses infections that result in disease as well as those that are subclinical or asymptomatic.) STIs often affect the external genitalia and skin, where microbes are easily transferred through physical contact. Lymph nodes in the genital region may also become swollen as a result of infection. However, many STIs have systemic effects as well, causing symptoms that range from mild (e.g., general malaise) to severe (e.g., liver damage or serious immunosuppression).

What part of the male urogenital tract is shared by the urinary and reproductive systems?

The genus of bacteria found in the vagina that is important in maintaining a healthy environment, including an acidic pH, is ___________.

When the microbial balance of the vagina is disrupted, leading to overgrowth of resident bacteria without necessarily causing inflammation, the condition is called ___________. 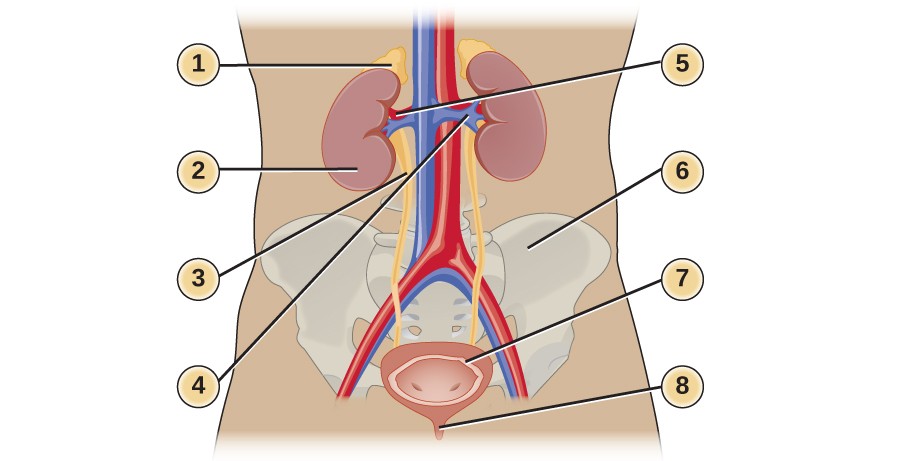 Epidemiological data show that the use of antibiotics is often followed by cases of vaginosis or vaginitis in women. Can you explain this finding?