The first half of glycolysis uses two ATP molecules in the phosphorylation of glucose, which is then split into two three-carbon molecules. 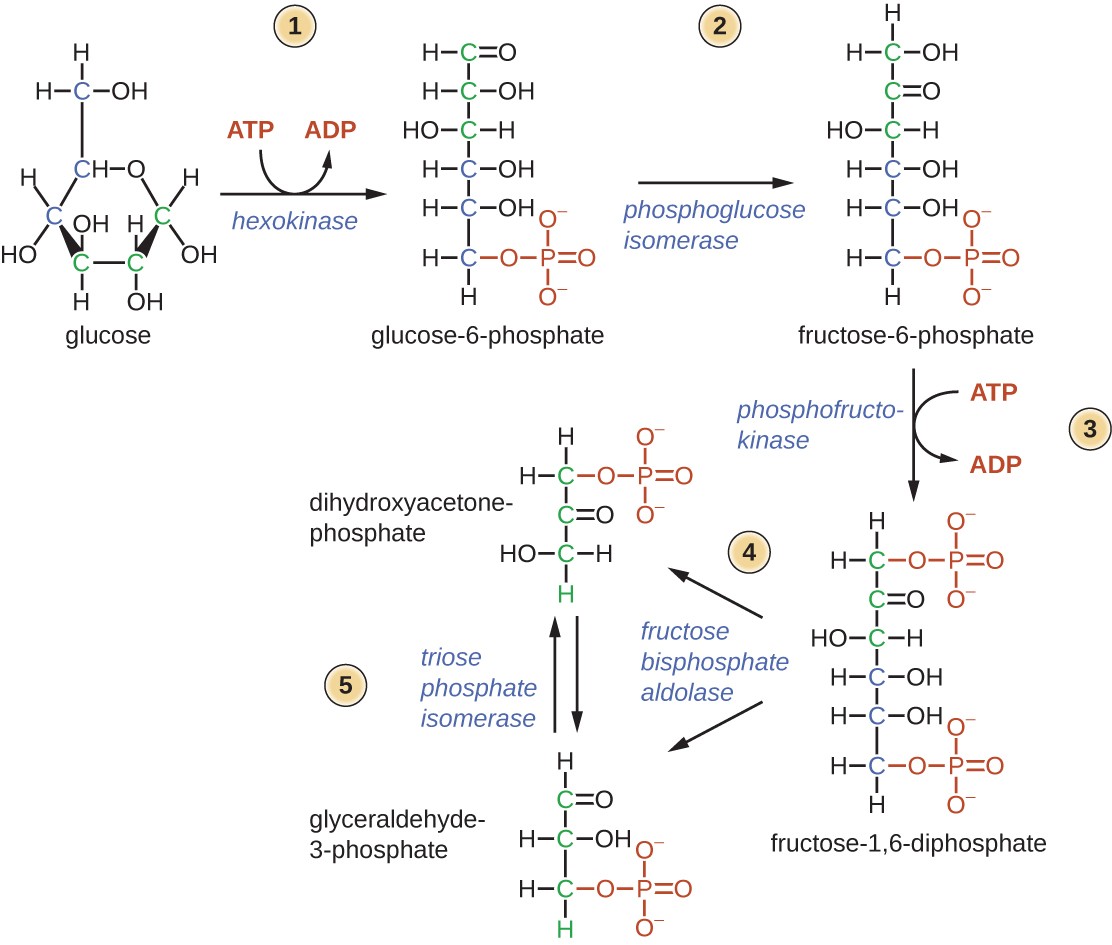 The second half of glycolysis involves phosphorylation without ATP investment (step 6) and produces two NADH and four ATP molecules per glucose. 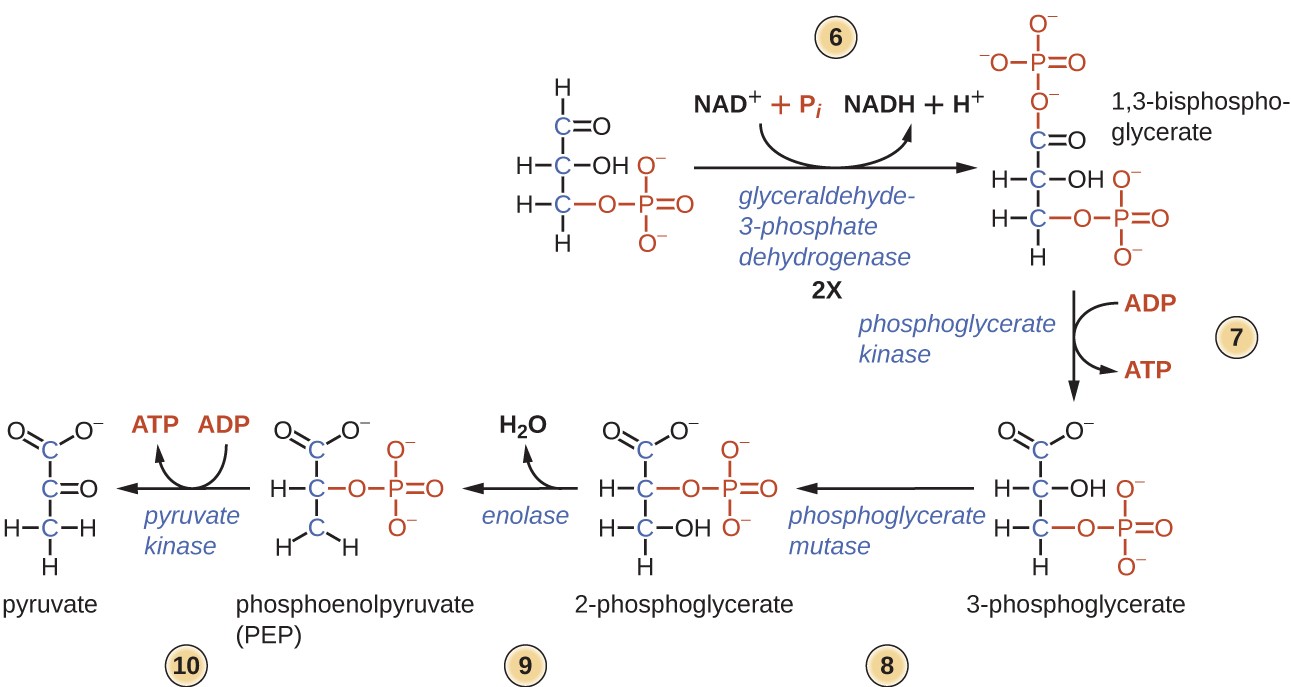 The Entner–Doudoroff Pathway is a metabolic pathway that converts glucose to ethanol and nets one ATP. 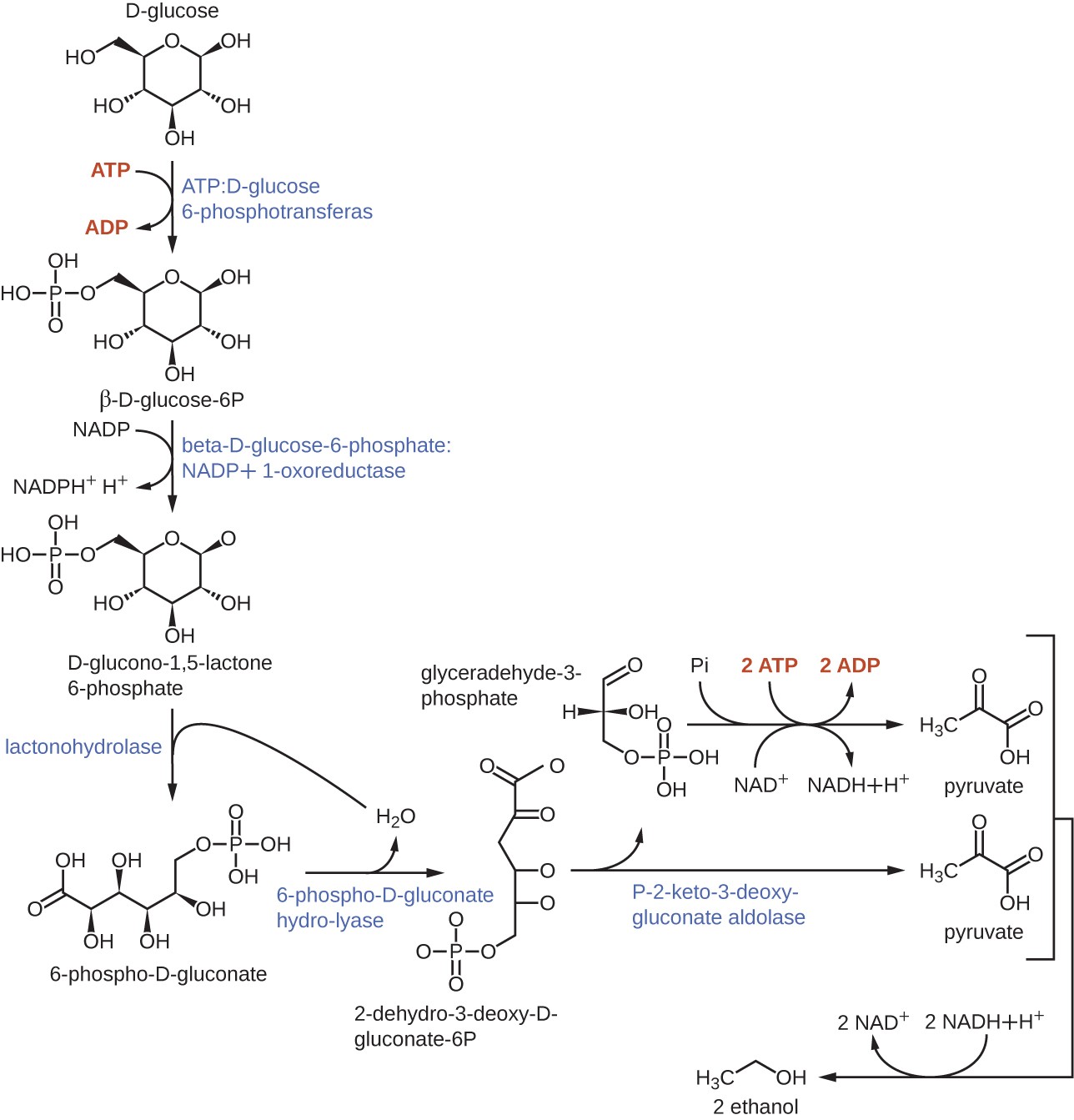 The pentose phosphate pathway, also called the phosphogluconate pathway and the hexose monophosphate shunt, is a metabolic pathway parallel to glycolysis that generates NADPH and five-carbon sugars as well as ribose 5-phosphate, a precursor for the synthesis of nucleotides from glucose.

In this transition reaction, a multi-enzyme complex converts pyruvate into one acetyl (2C) group plus one carbon dioxide (CO2). The acetyl group is attached to a Coenzyme A carrier that transports the acetyl group to the site of the Krebs cycle. In the process, one molecule of NADH is formed. 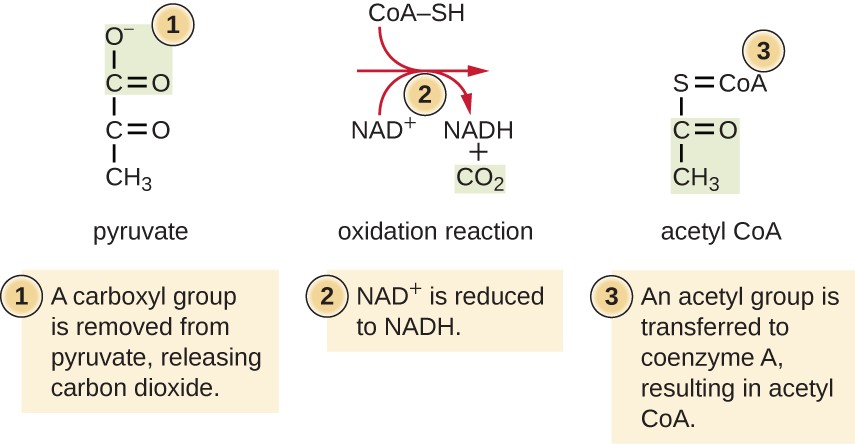 In the citric acid cycle, the acetyl group from acetyl CoA is attached to a four-carbon oxaloacetate molecule to form a six-carbon citrate molecule. Through a series of steps, citrate is oxidized, releasing two carbon dioxide molecules for each acetyl group fed into the cycle. In the process, three NADH, one FADH2, and one ATP or GTP (depending on the cell type) is produced by substrate-level phosphorylation. Because the final product of the citric acid cycle is also the first reactant, the cycle runs continuously in the presence of sufficient reactants. (credit: modification of work by “Yikrazuul”/Wikimedia Commons) 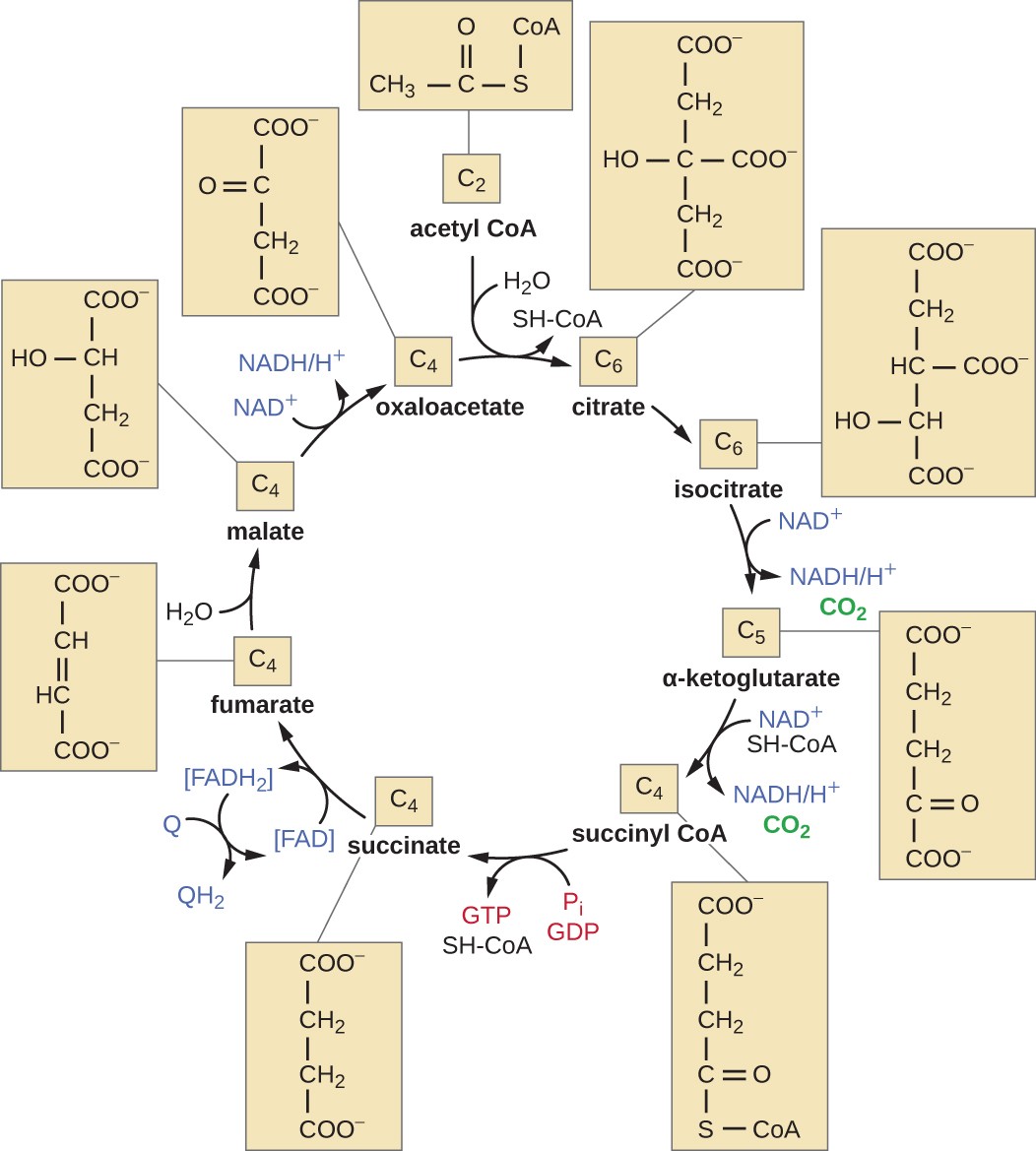 During fatty acid oxidation, triglycerides can be broken down into 2C acetyl groups that can enter the Krebs cycle and be used as a source of energy when glucose levels are low. 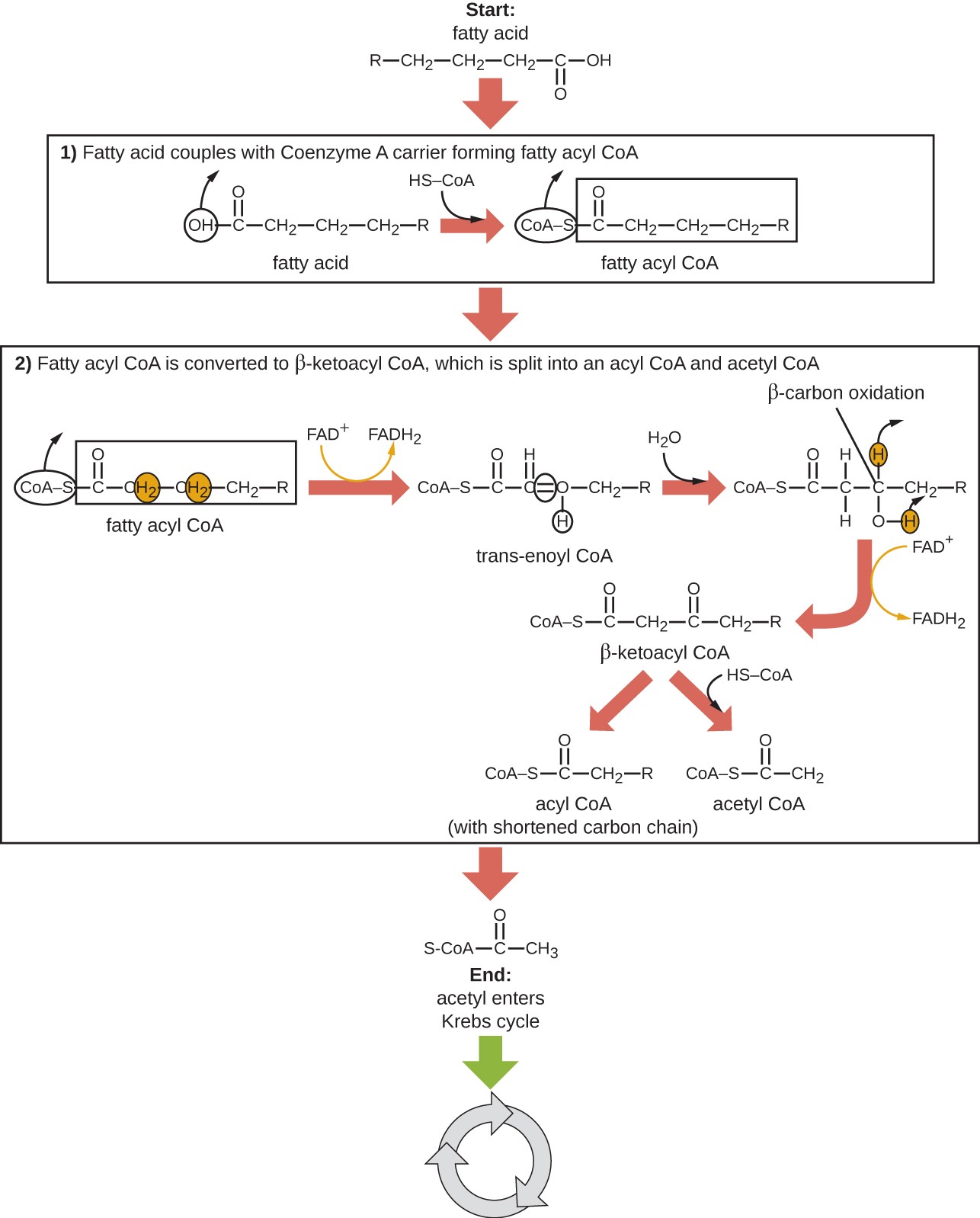 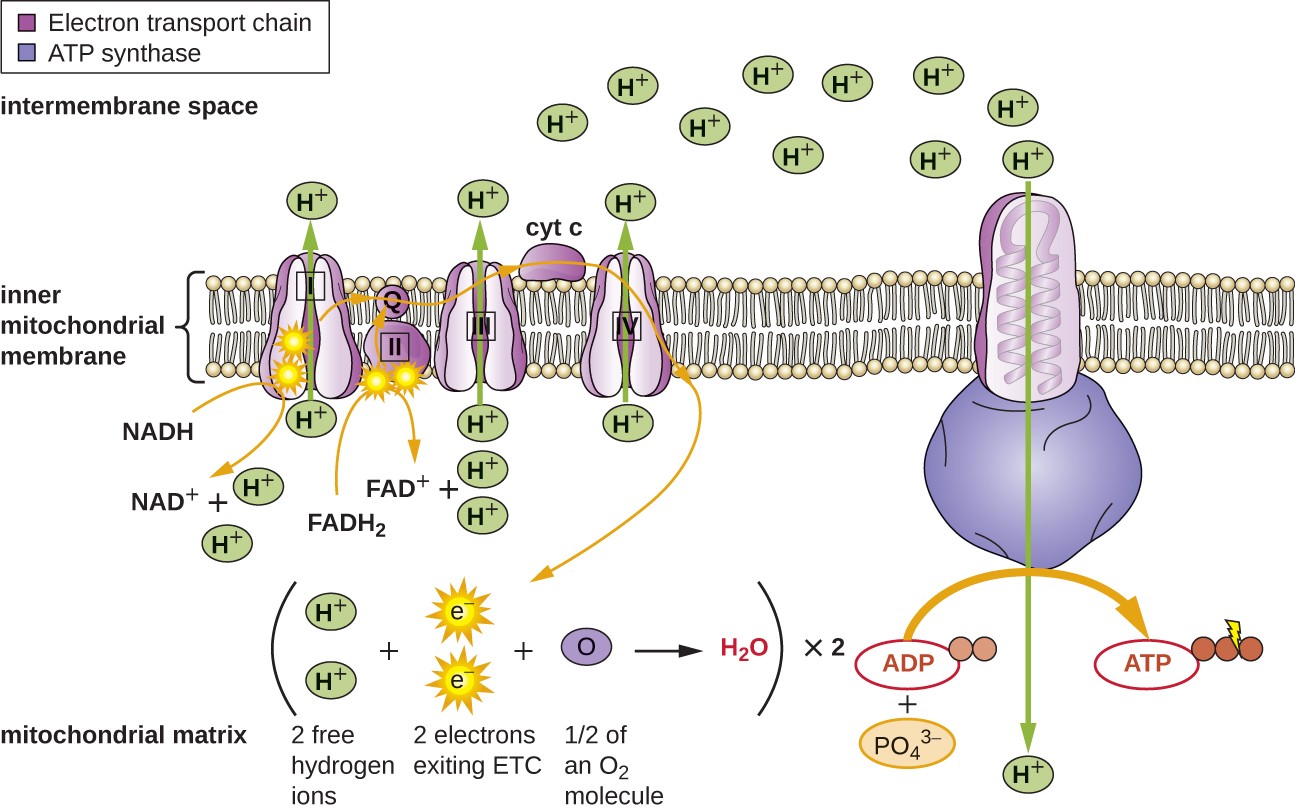 The Calvin-Benson cycle has three stages. In stage 1, the enzyme RuBisCO incorporates carbon dioxide into an organic molecule, 3-PGA. In stage 2, the organic molecule is reduced using electrons supplied by NADPH. In stage 3, RuBP, the molecule that starts the cycle, is regenerated so that the cycle can continue. Only one carbon dioxide molecule is incorporated at a time, so the cycle must be completed three times to produce a single three-carbon GA3P molecule, and six times to produce a six-carbon glucose molecule. 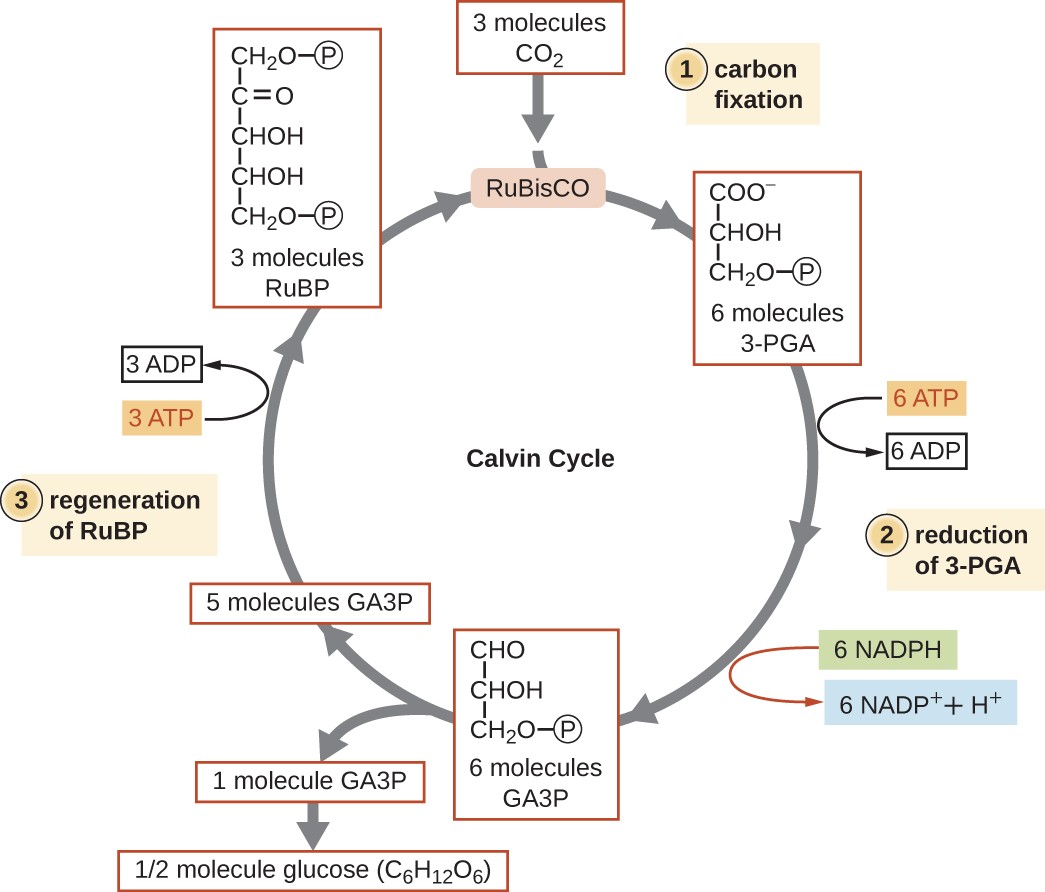