A plane decelerates, or slows down, as it comes in for landing in St. Maarten. Its acceleration is opposite in direction to its velocity. (credit: Steve Conry, Flickr) 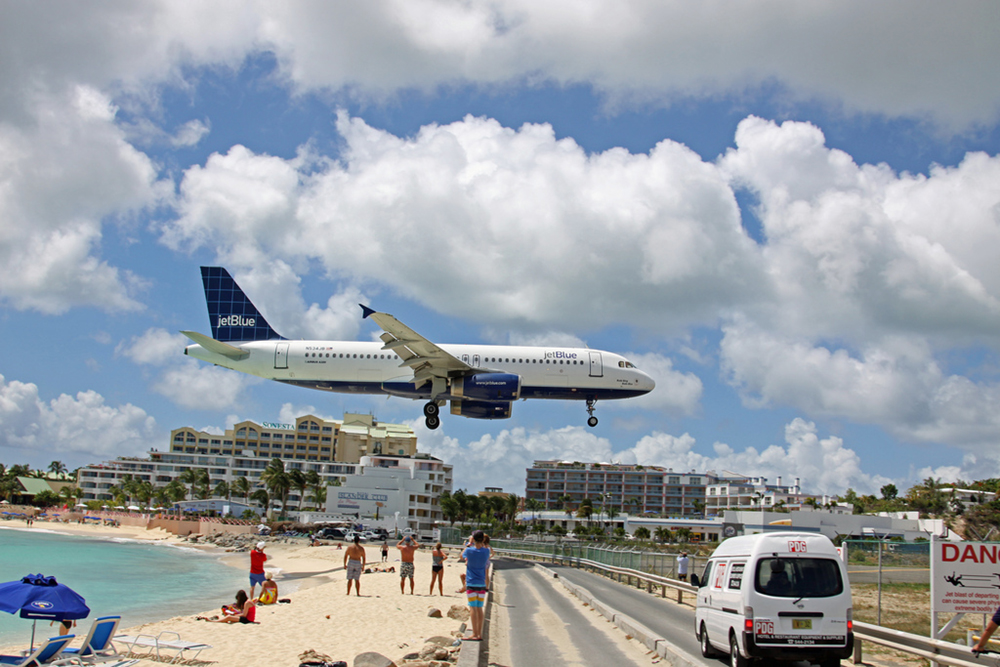 Average Acceleration is the rate at which velocity changes,

is time. (The bar over the

Acceleration as a Vector

Acceleration is a vector in the same direction as the change in velocity,

. Since velocity is a vector, it can change either in magnitude or in direction. Acceleration is therefore a change in either speed or direction, or both.

A subway train in Sao Paulo, Brazil, decelerates as it comes into a station. It is accelerating in a direction opposite to its direction of motion. (credit: Yusuke Kawasaki, Flickr) 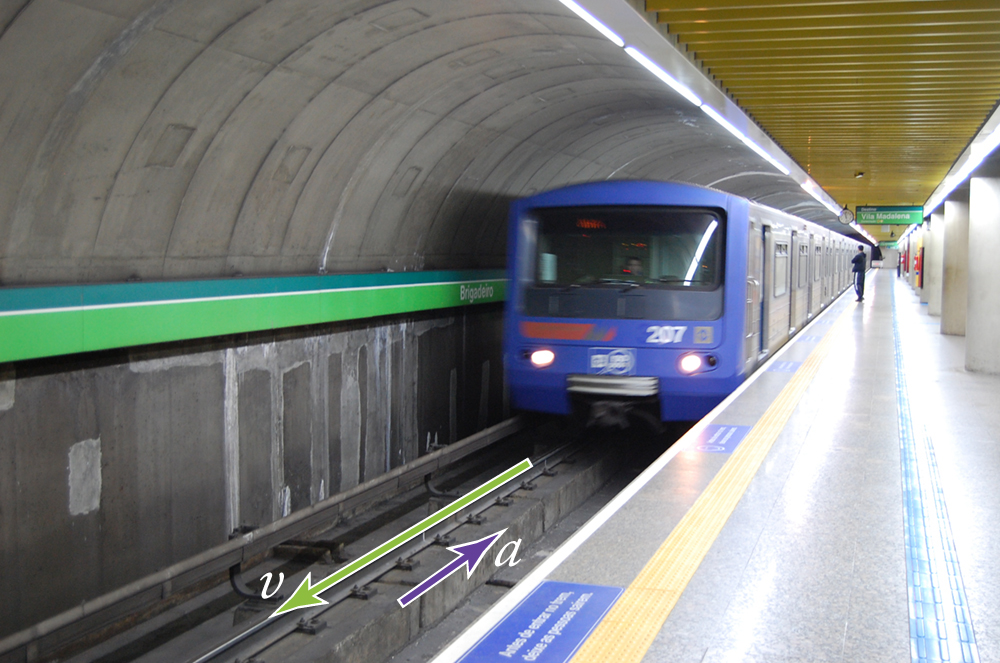 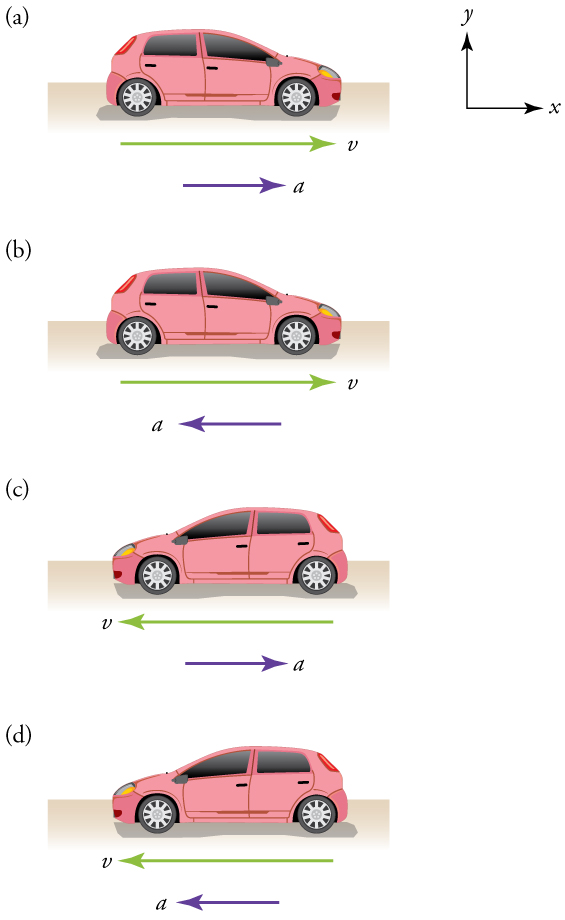 A racehorse coming out of the gate accelerates from rest to a velocity of 15.0 m/s due west in 1.80 s. What is its average acceleration? 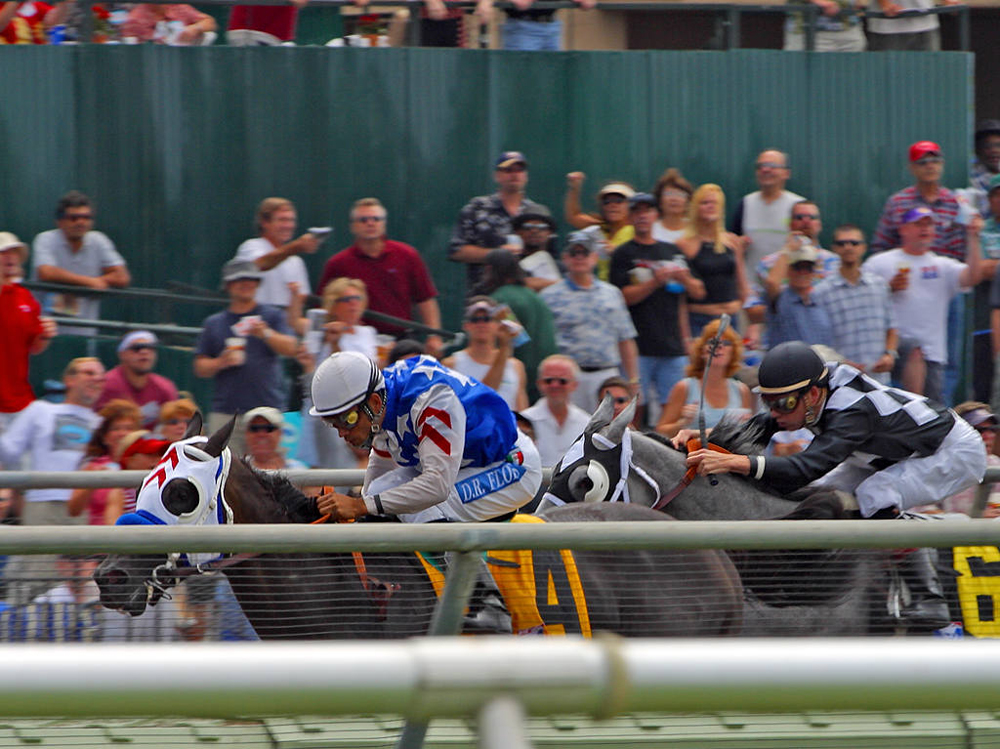 First we draw a sketch and assign a coordinate system to the problem. This is a simple problem, but it always helps to visualize it. Notice that we assign east as positive and west as negative. Thus, in this case, we have negative velocity.

We can solve this problem by identifying

2. Find the change in velocity. Since the horse is going from zero to

, its change in velocity equals its final velocity:

) and solve for the unknown

due west means that the horse increases its velocity by 8.33 m/s due west each second, that is, 8.33 meters per second per second, which we write as

. This is truly an average acceleration, because the ride is not smooth. We shall see later that an acceleration of this magnitude would require the rider to hang on with a force nearly equal to his weight.

The next several examples consider the motion of the subway train shown in (Figure). In (a) the shuttle moves to the right, and in (b) it moves to the left. The examples are designed to further illustrate aspects of motion and to illustrate some of the reasoning that goes into solving problems.

-axis so that + means to the right and

means to the left for displacements, velocities, and accelerations. (a) The subway train moves to the right from

. (Note that the prime symbol (′) is used simply to distinguish between displacement in the two different situations. The distances of travel and the size of the cars are on different scales to fit everything into the diagram.) 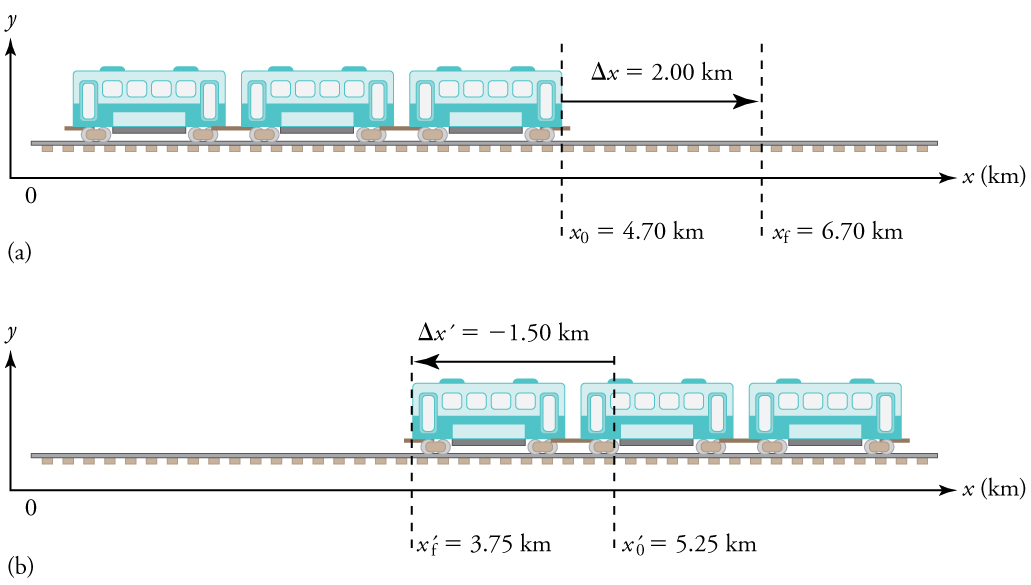 What are the magnitude and sign of displacements for the motions of the subway train shown in parts (a) and (b) of (Figure)?

A drawing with a coordinate system is already provided, so we don’t need to make a sketch, but we should analyze it to make sure we understand what it is showing. Pay particular attention to the coordinate system. To find displacement, we use the equation

. This is straightforward since the initial and final positions are given.

1. Identify the knowns. In the figure we see that

2. Solve for displacement in part (a).

3. Solve for displacement in part (b).

The direction of the motion in (a) is to the right and therefore its displacement has a positive sign, whereas motion in (b) is to the left and thus has a negative sign.

What are the distances traveled for the motions shown in parts (a) and (b) of the subway train in (Figure)?

2. The displacement for part (b) was

Distance is a scalar. It has magnitude but no sign to indicate direction.

Suppose the train in (Figure)(a) accelerates from rest to 30.0 km/h in the first 20.0 s of its motion. What is its average acceleration during that time interval?

It is worth it at this point to make a simple sketch:

(the trains starts at rest),

. Since the train starts from rest, its change in velocity is

, where the plus sign means velocity to the right.

3. Plug in known values and solve for the unknown,

4. Since the units are mixed (we have both hours and seconds for time), we need to convert everything into SI units of meters and seconds. (See Physical Quantities and Units for more guidance.)

The plus sign means that acceleration is to the right. This is reasonable because the train starts from rest and ends up with a velocity to the right (also positive). So acceleration is in the same direction as the change in velocity, as is always the case.

Now suppose that at the end of its trip, the train in (Figure)(a) slows to a stop from a speed of 30.0 km/h in 8.00 s. What is its average acceleration while stopping?

(the train is stopped, so its velocity is 0), and

2. Solve for the change in velocity,

4. Convert the units to meters and seconds.

The minus sign indicates that acceleration is to the left. This sign is reasonable because the train initially has a positive velocity in this problem, and a negative acceleration would oppose the motion. Again, acceleration is in the same direction as the change in velocity, which is negative here. This acceleration can be called a deceleration because it has a direction opposite to the velocity.

The graphs of position, velocity, and acceleration vs. time for the trains in (Figure) and (Figure) are displayed in (Figure). (We have taken the velocity to remain constant from 20 to 40 s, after which the train decelerates.)

What is the average velocity of the train in part b of (Figure), and shown again below, if it takes 5.00 min to make its trip?

Average velocity is displacement divided by time. It will be negative here, since the train moves to the left and has a negative displacement.

The negative velocity indicates motion to the left.

Finally, suppose the train in (Figure) slows to a stop from a velocity of 20.0 km/h in 10.0 s. What is its average acceleration?

Once again, let’s draw a sketch:

. The change in velocity here is actually positive, since

An airplane lands on a runway traveling east. Describe its acceleration.

If we take east to be positive, then the airplane has negative acceleration, as it is accelerating toward the west. It is also decelerating: its acceleration is opposite in direction to its velocity.

Is it possible for speed to be constant while acceleration is not zero? Give an example of such a situation.

Is it possible for velocity to be constant while acceleration is not zero? Explain.

Give an example in which velocity is zero yet acceleration is not.

If a subway train is moving to the left (has a negative velocity) and then comes to a stop, what is the direction of its acceleration? Is the acceleration positive or negative?

Plus and minus signs are used in one-dimensional motion to indicate direction. What is the sign of an acceleration that reduces the magnitude of a negative velocity? Of a positive velocity?

Dr. John Paul Stapp was U.S. Air Force officer who studied the effects of extreme deceleration on the human body. On December 10, 1954, Stapp rode a rocket sled, accelerating from rest to a top speed of 282 m/s (1015 km/h) in 5.00 s, and was brought jarringly back to rest in only 1.40 s! Calculate his (a) acceleration and (b) deceleration. Express each in multiples of

by taking its ratio to the acceleration of gravity.

Assume that an intercontinental ballistic missile goes from rest to a suborbital speed of 6.50 km/s in 60.0 s (the actual speed and time are classified). What is its average acceleration in

and in multiples of

deceleration
acceleration in the direction opposite to velocity; acceleration that results in a decrease in velocity