63 Applications of Statics, Including Problem-Solving Strategies

Now let us apply this problem-solving strategy for the pole vaulter shown in the three figures below. The pole is uniform and has a mass of 5.00 kg. In (Figure), the pole’s cg lies halfway between the vaulter’s hands. It seems reasonable that the force exerted by each hand is equal to half the weight of the pole, or 24.5 N. This obviously satisfies the first condition for equilibrium

is also satisfied, as we can see by choosing the cg to be the pivot point. The weight exerts no torque about a pivot point located at the cg, since it is applied at that point and its lever arm is zero. The equal forces exerted by the hands are equidistant from the chosen pivot, and so they exert equal and opposite torques. Similar arguments hold for other systems where supporting forces are exerted symmetrically about the cg. For example, the four legs of a uniform table each support one-fourth of its weight.

In (Figure), a pole vaulter holding a pole with its cg halfway between his hands is shown. Each hand exerts a force equal to half the weight of the pole,

. (b) The pole vaulter moves the pole to his left, and the forces that the hands exert are no longer equal. See (Figure). If the pole is held with its cg to the left of the person, then he must push down with his right hand and up with his left. The forces he exerts are larger here because they are in opposite directions and the cg is at a long distance from either hand.

Similar observations can be made using a meter stick held at different locations along its length.

A pole vaulter holds a pole horizontally with both hands. 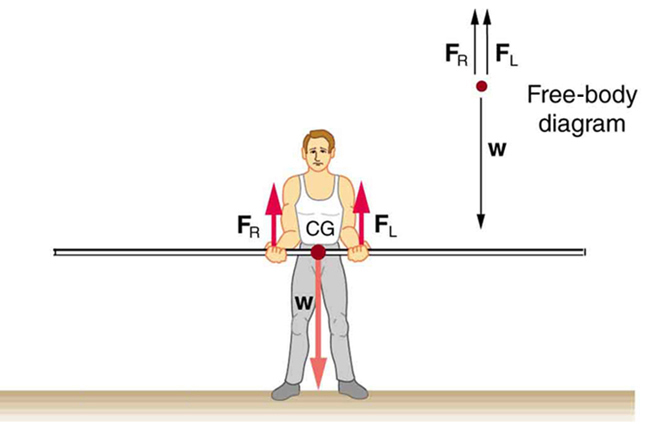 A pole vaulter is holding a pole horizontally with both hands. The center of gravity is near his right hand. 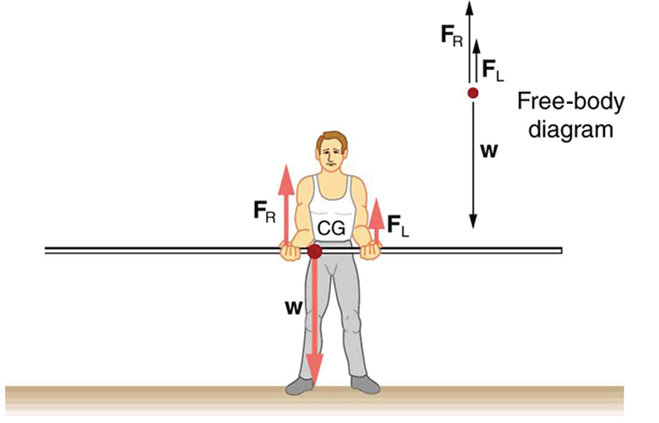 A pole vaulter is holding a pole horizontally with both hands. The center of gravity is to the left side of the vaulter. 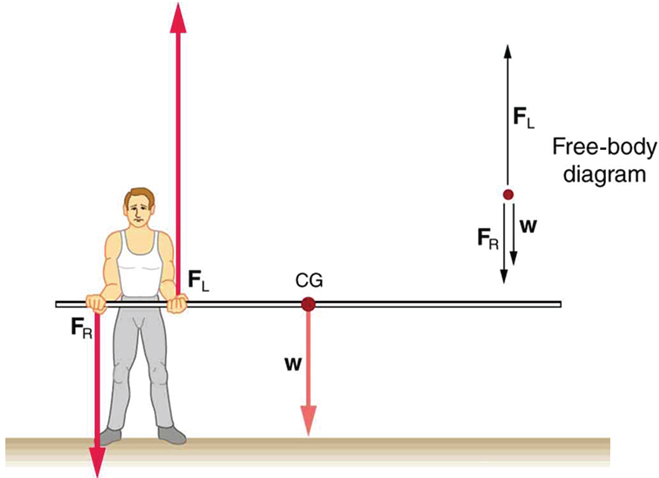 If the pole vaulter holds the pole as shown in (Figure), the situation is not as simple. The total force he exerts is still equal to the weight of the pole, but it is not evenly divided between his hands. (If

, then the torques about the cg would not be equal since the lever arms are different.) Logically, the right hand should support more weight, since it is closer to the cg. In fact, if the right hand is moved directly under the cg, it will support all the weight. This situation is exactly analogous to two people carrying a load; the one closer to the cg carries more of its weight. Finding the forces

is straightforward, as the next example shows.

If the pole vaulter holds the pole from near the end of the pole ((Figure)), the direction of the force applied by the right hand of the vaulter reverses its direction.

What Force Is Needed to Support a Weight Held Near Its CG?

For the situation shown in (Figure), calculate: (a)

, the force exerted by the right hand, and (b)

(Figure) includes a free body diagram for the pole, the system of interest. There is not enough information to use the first condition for equilibrium

), since two of the three forces are unknown and the hand forces cannot be assumed to be equal in this case. There is enough information to use the second condition for equilibrium

There are now only two nonzero torques, those from the gravitational force (

) and from the push or pull of the right hand (

). Stating the second condition in terms of clockwise and counterclockwise torques,

or the algebraic sum of the torques is zero.

, and substituting known values, we obtain

The first condition for equilibrium is based on the free body diagram in the figure. This implies that by Newton’s second law:

From this we can conclude:

is seen to be exactly half of

is applied twice as far from the cg as

If the pole vaulter holds the pole as he might at the start of a run, shown in (Figure), the forces change again. Both are considerably greater, and one force reverses direction.

Play with objects on a teeter totter to learn about balance. Test what you’ve learned by trying the Balance Challenge game.

When visiting some countries, you may see a person balancing a load on the head. Explain why the center of mass of the load needs to be directly above the person’s neck vertebrae.

To get up on the roof, a person (mass 70.0 kg) places a 6.00-m aluminum ladder (mass 10.0 kg) against the house on a concrete pad with the base of the ladder 2.00 m from the house. The ladder rests against a plastic rain gutter, which we can assume to be frictionless. The center of mass of the ladder is 2 m from the bottom. The person is standing 3 m from the bottom. What are the magnitudes of the forces on the ladder at the top and bottom?

In (Figure), the cg of the pole held by the pole vaulter is 2.00 m from the left hand, and the hands are 0.700 m apart. Calculate the force exerted by (a) his right hand and (b) his left hand. (c) If each hand supports half the weight of the pole in (Figure), show that the second condition for equilibrium

is satisfied for a pivot other than the one located at the center of gravity of the pole. Explicitly show how you follow the steps in the Problem-Solving Strategy for static equilibrium described above.